Deputy Secretary of the HCMC Party Committee Nguyen Ho Hai on February 25 led a delegation from the committee to pay a visit to People’s Doctor Nguyen Thi Ngoc Anh; and Hero of Labor, Pharmacist Tran Van Nhieu.
Mr. Hai extended greetings to doctor Nguyen Thi Ngoc Anh who is former Director of the HCMC Children’s Hospital 1 and wished the doctor good health to continue contributing her knowledge and experience to the healthcare sector.
He also conveyed his wishes to Pharmacist Tran Van Nhieu who is former Director of Pharmedic Pharmaceutical Medicinal Joint Stock Company.
The Deputy Secretary of the Party Committee expressed his sincere thanks for Hero of Labor Tran Van Nhieu and generations of healthcare workers of the company who have made significant contributions to improving and protecting the public’s health.
On February 24, Vice Chairman of the People’s Committee of HCMC Duong Anh Duc leading a delegation of the city’s leaders visited Doctor Nguyen The Dung who is former Director of the municipal Department of Health.
He expressed his profound gratitude to the doctor and praised his dedication to the city’s healthcare sector as well as sent best wishes to him and his family. He hoped Doctor Nguyen The Dung will continue to contribute to the healthcare sector. 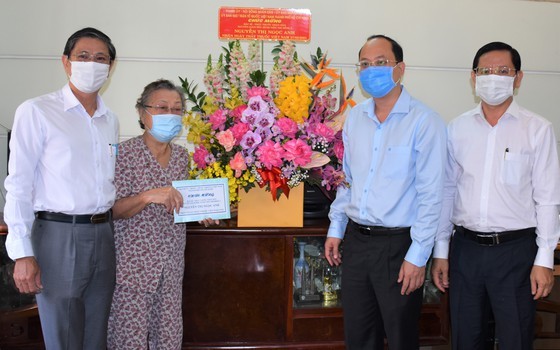 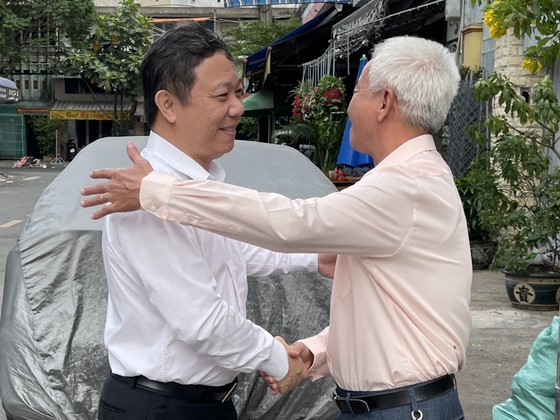 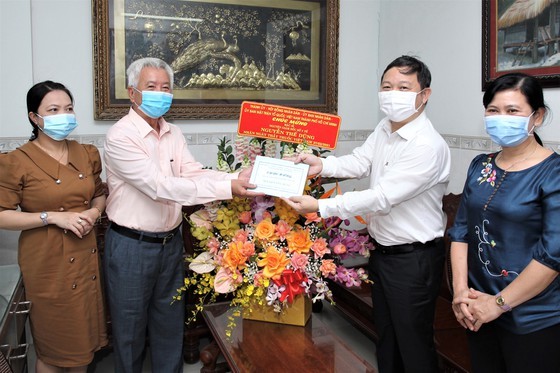 Vietnam’s economic engine HCM City has the country’s lowest fertility rate of 1.53, according to the Ministry of Health’s latest report in June.

A total 21 provinces and cities have low to very low fertility rates, mostly in the Mekong Delta, southeast and central coastal regions. With a total population of 38 million, these provinces’ prolonged declining fertility rates pose dire threats to the country’s future in terms of security, workforce and economy, the report said.

Meanwhile, 33 others have high fertility rates, with the central province of Ha Tinh topping the list at 2.9 births per woman of childbearing age.

The MoH has recently decided to attempt to adjust fertility rates among localities to maintain the desired fertility at replacement level of two to 2.2 children per woman of reproductive age.

The ministry said it would allocate State funds to provide contraceptive methods to localities with low birth rates which are usually poor and currently account for 42 per cent of the country’s population.

There will also be incentives to encourage families in areas with low fertility rates to have more children.

The plan touches on piloting online sex education and consulting for youth as well as programmes to prevent infertility and reproductive cancers for adolescents.

According to the MoH, Vietnam has a high rate of infertility of which 7.7 per cent is primary infertility.

The 2019 Population and Housing Census also revealed contradictions between women’s financial statuses and their willingness to bear a child.

Those in the richest group had the lowest fertility rate and vice versa. Sex imbalance at birth has witnessed an upward trend in recent years, the census highlighted.

According to the 2019 census, the TFR of urban areas was 1.83 children per woman, lower than rural areas’ average rate of 2.26. The trend has remained the same for two decades.

The imbalance in access to information and health care services contributes to the status quo, the census suggests, as couples living in cities are aware of the benefits of family planning and can easily access contraception.

Earlier in April, Prime Minister Nguyen Xuan Phuc approved a birth rate adjustment programme which encourages people to get married before the age of 30 and women to give birth to their second child before they are 35.

Local authorities have been asked to pilot marriage and family consultation services such as dating clubs and pre-marriage health consultations.  VNS

Party General Secretary and State President Nguyen Phu Trong emphasized this at a national conference regarding the election of deputies to the 15th National Assembly and People’s Councils at all levels for the 2021-2026 term which was held in Hanoi on January 21.

The election is of particular importance, with the country currently sparing no effort to welcome the 13th National Party Congress. Indeed, this marks a major political event which is of strategic significance for the cause of continuing the comprehensive and synchronous reform, whilst boosting national development in a faster and more sustainable manner moving forward, he stated.

“This is an opportunity to exercise the people’s mastership through the selection and election of typical, truly virtuous, talented, and worthy representatives who represent the people in the NA and the People’s Council at all levels. Fully aware of the importance as well as the great significance of this election, the Party Central Committee, the NA, the Government, and the Vietnam Fatherland Front have identified this as a key political task of the entire Party, people, and army in 2021,” said Party General Secretary Nguyen Phu Trong.

He therefore asked all Party committees, organisations, and agencies to assign relevant tasks to ensure that the election will achieve the best results and will be part of a truly festive holiday for all citizens.

In her closing speech, NA Chairwoman Nguyen Thi Kim Ngan expressed her confidence that the conference has  provided guiding documents regarding the election to relevant delegates, agencies, and organisations.

The outcomes of the conference are likely to contribute to promoting the rights, obligations, and responsibilities of citizens as part of the process of building a clean, strong, effective, and efficient state apparatus. In addition, it will help all sectors and localities to competently organise election activities towards developing, consolidating, and fine-tuning a socialist country governed by laws for the Vietnamese State of the People, by the People, and for the People.

The results of the election will therefore make an important contribution to promoting democracy, building a bloc of great unity, along with successfully carrying out the goals and tasks which will be set out in the Resolutions of the 13th National Party Congress, the NA leader said.

Furthermore, NA Chairwoman Ngan stated her belief that with the Party’s concentrated leadership, along with the active and responsible involvement of the political system, the election will be conducted in accordance with regulations.

The Hanoitimes – To prepare for the election, the National Election Council made its debut in Hanoi on June 12.

Vietnam will hold a national online meeting on January 21 to launch the election of the National Assembly (NA) deputies and representatives of the all-level people’s councils for the 2021-26 term.

The meeting is aimed to finalize documents for the councils and relevant agencies to ensure that all preparations for the big event get ready, according to the National Assembly’s Chairwoman Nguyen Thi Kim Ngan, who is also Chairperson of the National Election Council.

Preparations for the election to the National Assembly and all-level people’s councils for the next tenure have progressed as scheduled, Ms. Ngan said at a meeting on January 18.

She said the council has discussed legal, personnel, medical, and security issues.

To prepare for the election, the National Election Council made its debut in Hanoi on June 12.

A number of documents guiding the organization of the election have been jointly released by the NA’s Standing Committee, the National Election Council, the Prime Minister, the Party Central Committee’s Commission for Communication and Education, the Central Organization Commission, the Ministry of Home Affairs, and the Ministry of Finance.

Under the pilot plan, the city would organize pedestrianized spaces around Hau River Park and Ninh Kieu Wharf, its top tourist attractions, as well as develop night markets combined with pedestrian streets.

In addition, bars and restaurants in Ninh Kieu District would be allowed to stay open until 2 a.m. while some tour services taking visitors to watch dawn on Hau River or visit Cai Rang floating market can operate overnight.

Outdoor activities would be held on weekend nights.

Currently, shopping and entertainment services are only allowed to operate from 6 p.m. to 10 p.m. at night markets in Ninh Kieu District.

After one to two years of piloting, Can Tho will implement night-time services across many parts of the city in an effort to bolster its tourism sector and boost socio-economic development.

Can Tho, with an estimated population of 1.61 million, is one of Vietnam’s five centrally-managed cities, alongside Hanoi, Ho Chi Minh City, Hai Phong and Da Nang,

It is not the only locality in Vietnam that has been boosting night-time economy development.

In July 2020, Prime Minister Nguyen Xuan Phuc approved a master plan for night-time economy development in the country, allowing major cities like Hanoi, HCMC and Da Nang as well as other tourist destinations like Hoi An, Hue, Da Lat and Phu Quoc to pilot night-time services from 6 p.m. to 6 a.m.

In September, authorities in Hanoi sought feedback for a pilot scheme to allow recreational establishments in the Hoan Kiem area to stay open past midnight.

Under the scheme, catering, entertainment and shopping services in Hoan Kiem District, the busiest area in the capital, would be allowed to operate overnight every day while outdoor activities, historical relics and heritage sites would remain open until midnight.

Last December, Khanh Hoa authorities said they were working on a plan to develop the central province’s night-time economy centered around the famous beach town of Nha Trang.

The vaccines would come from British-Swedish firm AstraZeneca, global vaccine access mechanism Covax and other domestic producers. The reception schedule and number of doses received was reported by the National Steering Committee on Covid-19 Prevention and Control to the government Wednesday.

The first batch, delivered Wednesday, was 117,000 Covid-19 vaccine doses from AstraZeneca. They would be prioritized for those on the frontline of the pandemic fight, including medical workers, doctors, nurses, contact tracers and officials of Covid-19 prevention and control committees.

The second batch, expected to arrive within the first half of this year, would comprise 1.5 million additional doses, of which 1.2 million are provided by Covax and the rest by AstraZeneca. These doses would also be prioritized for those on the pandemic frontline, with the addition of diplomatic personnel, customs officers, immigration officers and soldiers.

The third batch, expected within the second quarter, would include 8.2 million additional doses from AstraZeneca. Soldiers who have not been inoculated during the second wave, along with police officers, teachers and the elderly (aged 80 and above) would be vaccinated at this time.

The fourth batch, expected within the third quarter, would consist of 10.9 million doses, including 3.6 million from Covax and the remainder from AstraZeneca. The elderly who have not been vaccinated, along with those working in essential businesses and those with chronic conditions, would be inoculated this time round.

The fifth batch, expected between the fourth quarter and first quarter of 2022, would provide 14.4 million doses by AstraZeneca for those with chronic conditions and not yet vaccinated.

The sixth batch, expected within the same time frame as the fifth, would afford 25.2 million Covax doses to those with chronic conditions and not yet vaccinated, along with those aged 65-80.

The final batch, expected between the fourth quarter and second quarter of 2022, would comprise 90.5 million doses from both foreign and domestic producers. They would be administered to those aged 65-80 who have not been vaccinated and those aged 18 and above not included in the aforementioned priority list.

Vaccines should be prioritized for citizens in areas with outbreaks, said the steering committee. The committee also proposed the health ministry and other relevant entities manage the buying, importing and distribution of vaccines.

Four indigenous vaccines are under development by Nanogen Pharmaceutical Biotechnology JSC, the Institute of Vaccines and Medical Biologicals, Vaccine and Biological Production Company No. 1, and the Center for Research and Production of Vaccines and Biologicals. Vietnam earlier said it was stepping up negotiations with the U.S.’s Pfizer and Moderna, along with other vaccine manufacturers in Russia and some other countries to ensure it can get a total 150 million doses to cover 70 percent of its 98-million population this year.