The market ended mixed after Wednesday’s morning session with many big stocks in the southern market posting losses.

On the Ho Chi Minh Stock Exchange (HoSE), the benchmark VN-Index dropped 0.38 per cent to 1,182.11 points. At the end of the morning session, 203 stocks climbed while 224 stocks declined.

Many big stocks across all sectors faced strong selling pressure, leading to a loss of 0.37 per cent to 1,190.32 points in the VN30-Index. Of 30 biggest stocks, 21 stocks slid while only seven rose.

Of which, Vingroup JSC (VIC) posted the biggest loss, down 1.2 per cent. Followed by Vinhomes JSC (VHM) and Vietcombank (VCB).

During the morning session, over 415.5 million shares were traded, worth VND10.4 trillion.

Meanwhile, the HNX-Index on the Ha Noi Stock Exchange (HNX) rose 1.47 per cent to 251.58 points despite a drop in the 30 large-cap tracker of the northern market HNX30-Index.

The index started off strong with a gain of nearly 10 points in the morning to hit the 1,990 range and stayed in the green mostly before plunging in the afternoon and closing with a 0.44-point increase, its fourth gaining session in a row.

The VN30 basket, comprising the 30 largest capped stocks on the HoSE, saw 12 tickers gain, led by TPB of private TPBank, up 6.3 percent to a new all-time high of VND29,750. The ticker has surged 8.8 percent in the last three sessions.

HDB of HDBank followed with a 3.5 percent gain. But unlike other private banking blue chips, the ticker has not been able to climb back to this year’s peak that it reached on January 15. It is still 4.5 percent away.

VJC of budget airline Vietjet rounded off the top five with a 1.1 percent gain to its highest price since January last year, showing that it is now approaching pre-pandemic figures after going through major slumps in March and July last year.

On the losing side, GAS of the state-owned PetroVietnam Gas Jsc had a 1 percent fall, followed by MBB of Military Bank, down 0.9 percent and POW of electricity distributor PetroVietnam Power Corporation, down 0.8 percent.

Foreign investors were net sellers for the eighth session in a row to the tune of VND731 billion, highest in the last 11 sessions. Selling pressures were strongest on VNM of dairy giant Vinamilk, HPG and MSN of conglomerate Masan Group. 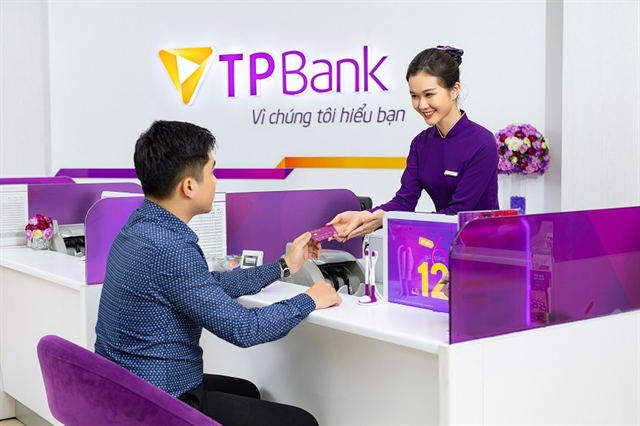 A customer at one of TPBank’s branches. TPBank shares rose 6.25 per cent on Tuesday, supporting the VN-Index’s upward trend. Photo tpb.vn

On the Hồ Chí Minh Stock Exchange (HoSE), the VN-Index climbed 0.04 per cent to 1,186.61 points. The index experienced a volatile session.

After rising to break 1,191.77 points earlier in the session, the index dropped on higher selling pressure. However, the VN-Index still closed the trading day with a small gain.

The trend was widely expected by analysts from securities firms.

“The VN-Index is expected to gain slightly in the next sessions. The index will test resistance territory of 1,190 – 1,200 points,” Bảo Việt Securities Co. wrote in a daily report.

The market might still face fluctuations and corrections at this resistance level, the firm added.

Over 577 million shares were traded today on HoSE, worth over VNĐ15.2 trillion.

The VN30-Index, which tracks the 30 biggest stocks on the southern bourse, also increased by 0.24 per cent to 1,194.71 points. Of the 30 large-cap stocks in VN30 basket, twelve stocks rose, while fourteen stocks slid.

During the session, investors poured over VNĐ2.1 trillion into the northern bourse, with more than 119.48 million shares traded.

In general, the market’s liquidity was high with total trading volume of 744 million shares (including shares traded on UPCOM), worth over VNĐ18.08 trillion.

An overview of the Aqua City project developed by Novaland in the southern province of Dong Nai. Novaland is among companies w hose capitalisation is valued at billions of dollars on the market (Photo: novaland.com.vn)

Hanoi (VNS/VNA) – Vietnam’s stock market reached approximately 87.68 percent of the country’s Gross Domestic Product (GDP) as of the end of 2020, the highest rate reported so far.

Including the government bond market and corporate bond market , the value of Vietnam’s entire stock market by the end of 2020 exceeded 110.64 percent of GDP, this is also the highest rate ever recorded.

New cash flow continuously pouring into the market since the second half of 2020 has boosted liquidity. December 2020 and January 2021 were two months witnessing record matching value, of more than 250 trillion VND (10.8 billion USD) and more than 300 trillion VND on the Ho Chi Minh City Stock Exchange (HoSE), respectively.

However, skyrocketing liquidity has far exceeded market forecasts, leading to frequent congestion in many sessions, causing a lot of trouble for investors and affecting the quality of the market.

The sudden increase in liquidity is unpredictable, causing undesired interruptions in trading, according to HoSE.

To tackle this issue, the State Securities Commission said it was speeding up the implementation of a new information technology system for the entire stock market, known as KRX.

The Vietnamese stock market has experienced a year of spectacular recovery from the bottom caused by the COVID-19 crisis, a trend that is in parallel with most of the major stock markets in the world. Since the bottom at the end of March 2020, the VN-Index has increased by nearly 50 percent.

So far, the Vietnamese stock market recorded 38 companies whose value reaches billions of dollars. Vingroup is valued at 15.95 billion USD in market capitalisation. It is followed by the State-owned Vietcombank (VCB), with 15.82 billion USD. Third place belongs to Vinhomes (VHM) with 14.52 billion USD.

Some unfamiliar names also appear in the billion-dollar business group, with surprises in value. Most notably ThaiHoldings (THD) valued at 3.06 billion USD, became the third largest real estate company in the market by market capitalisation after Vinhomes and Novaland, the latter of which is valued at 3.41 billion USD.

HCMC – The VN-Index of the Hochiminh Stock Exchange managed to reverse course to end slightly higher today, March 2, buoyed by a number of large-cap stocks that bounced back at the end of the session.

Trading in the local market was busy in the morning but started slowing down in the afternoon as investors were concerned that a technical error would continue to clog trade when market turnover had remained high.

Closing the session, with 227 advancers and 190 decliners, the benchmark index added 0.44 point, or 0.04% over the session earlier at 1,186.35. Turnover of the HCMC market dropped over 10% in volume and 5% in value at over 577 million shares and more than VND15 trillion, including around VND1.4 trillion worth of shares traded in block deals.

Many largecaps in the VN30 basket not only maintained growth but also rose sharply at the close, such as steelmaker HPG, lenders TPB and HDB, retailer VRE. Of them, TPB was the most outstanding performer as it surged 6.3% with over 17.1 million shares changing hands. HPG inched up 1.1% and led the southern bourse by liquidity, with a matching volume of 23.67 million shares.

Regarding the performance of stocks by sectors, bank stocks including STB, TPB, TCB, LPB, and HDB were the major cash magnets, followed by brokerages SSI and HCM, fertilizer producers DCM, BFC, and DPM.

On the northern bourse, the increased profit-taking dampened the HNX-Index, sending it down 4.43 points, or 1.76% against Monday at 247.94, with 98 winners and 174 losers. Nearly 120 million shares worth over VND2 trillion were transacted on the Hanoi market, dipping a slight 2% in both volume and value.

The index, which represents an improvement from the previous month if it rises above 50, has now strengthened for three successive months, according to a note by market research company IHS Markit.

There has been sustained growth in new orders for six straight months amid signs of improving international demand, the report said.

Employment increased for the second time in three months as firms responded to rises in demand and production requirements, it added.

Factories in some provinces like Binh Duong and Dong Nai in the south and Bac Giang in the north are struggling as they need thousands of new workers following a surge in new orders.

Yet IHS Markit’s data showed that business confidence continued to wane in February, the third straight month it fell and at the lowest level since last August, after 865 new Covid-19 cases were found following the latest outbreak on January 28.

“Renewed increases in output, employment and purchasing activity are all welcome signs, but a recent increase in Covid-19 cases sounds a note of caution,” Andrew Harker, the company’s economics director, said.

Vietnam has in the past proved successful in quickly containing the virus, and if this success is repeated the manufacturing sector would remain in growth territory, he added.

IHS Markit forecasts a rise in industrial production of 6.8 percent this year.