The Ho Chi Minh Stock Exchange (HoSE), on which the VN-Index is based, was a sea of red with 385 stocks losing and only 69 gaining, out of which 18 hit their lower circuits. Total trading volume jumped over 15 percent compared to the previous session, to VND16.6 trillion ($722.13 million).

By 11.20 a.m., the index had lost 47.7 points (4.22 percent) to 1,079.1 points, with several blue chips at floor price. News of new Covid-19 cases in Hanoi and Ho Chi Minh City, profit taking pressure after last week’s gains, and investors cashing out before the upcoming break had caused selling pressure to mount, analysts noted.

It was not until the end of the morning session that bottom fishing cash flow began to partially offset declines, narrowing the loss to 35 points, or just over 3 percent.

The VN-Index virtually plateaued in the afternoon session, but sporadic freezes in trading, a phenomenon that has appeared in the past month due to overloads of orders on the HoSE trading system, hampered a potential recovery of the VN-Index.

The biggest loser this session was TCH of real estate developer Hoang Huy Group, down 6.9 percent, its floor price.

Stocks in the Vingroup family were also some of the worst performers. VIC of parent private conglomerate Vingroup, HoSE’s largest cap, plunged 6 percent, while VRE of retail arm Vincom Retail and VHM of real estate arm Vinhomes were down 5.5 percent and 4.6 percent respectively.

Of private banks STB of Sacombank fell 4.9 percent, TCB of Techcombank 3.6 percent, HDB of HDBank and VPB of VPBank both 2.7 percent, and TPB of TPBank with 1.9 percent.

Foreign investors ended a streak of eight consecutive net buying sessions by offloading a net of VND1.4 trillion on all three bourses, the biggest net sell seen in nearly half a year, with the nine most net sold stocks being tickers on the VN30. 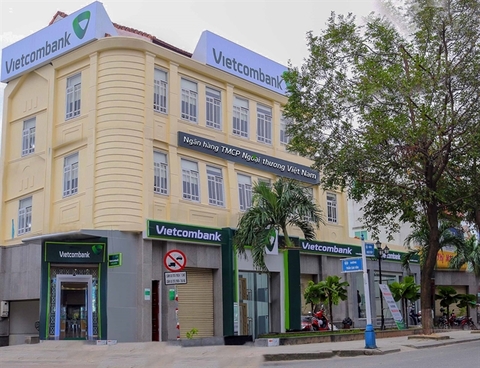 Vietcombank’s new transaction office in Hoi An, Da Nang. The bank shares end lower on Friday, down 0.69 per cent.— Photo courtesy of Vietcombank

Viet Nam’s stock market was mixed on Friday, ending its two-day rally after a long holiday.

On the Ho Chi Minh Stock Exchange (HoSE), the VN-Index dropped 0.07 per cent to 1,173.5 points. The decrease went against expectations from analysts that the index might increase at the end of the session despite some strong fluctuations.

“The VN-Index is expected to slightly increase in the last trading session of the week. However, the market might face some corrections in the session with a clearer division between stock lines,” Bao Viet Securities wrote in a daily report.

It also believed that the benchmark might have a higher chance in gaining points in the first five days after Tet holiday rather than the possibility of losing points. The index declined during Thursday’s morning session but bounced back in the afternoon.

During the session, nearly 578.3 million shares were traded in the southern bourse, equivalent to a value of over VND14.7 trillion.

Meanwhile the winner of the market was Asia Commercial Bank (ACB), followed by JSC Bank for Investment and Development of Viet Nam (BID) and Vietnam Rubber Group JSC (GVR). The ACB shares traded at VND31,100, up 6.69 per cent, while BID and GVR gained 1.61 per cent and 2.37 per cent, respectively.

On the Ha Noi Stock Exchange (HNX), the HNX-Index, the northern market’s benchmark, reversed course from the morning session. The index rose 0.1 per cent to 231.18 points after losing 0.08 per cent in the morning.

More than 101.8 million shares were traded on the northern market during Friday’s session, worth nearly VND1.8 trillion.

On the other hand, foreign investors were net sellers on both exchanges today, with a net value of VND12.85 billion on the HoSE and VND612.52 million on the HNX. — VNS

Shares opened a new week on a negative note with all sectors falling deeply.

The market breadth turned into negative territory after increasing last week. In the morning session, 380 stocks went down with 14 stocks hitting the maximum daily loss of 7 per cent, while only 67 stocks increased.

The 30 large-cap tracker VN30-Index also lost 3.35 per cent, equivalent to nearly 40 points, to 1,096.27 points. Twenty-eight of 30 biggest stocks in the southern market fell, and only two stocks climbed.

Of which Vingroup JSC posted the biggest loss, down 4.19 per cent. Followed by Vietcombank (VCB) and Vinhomes JSC, which decreased by 4.3 per cent and 3.32 per cent, respectively.

The Hanoitimes – The VN-Index’s rally stemmed from strong participation of domestic investors and lower selling pressure from foreign players.

Vietnam’s benchmark VN-Index outperformed both regional and global markets such as Thailand, China, South Korea and S&P 500 of the US in May, according to Viet Dragon Securities Company (VDSC).

The index’s performance stemmed from strong participation of domestic investors and lower selling pressure from foreign players, stated VDSC in its latest report.

As a result, market liquidity, measured by the average daily trading value, reached VND4.4 trillion, up 74% compared to that of January 2020, according to the report.

Regarding domestic investors, while the positive process in Covid-19 control remained a key factor, VDSC said the markets were greatly supported by further relaxing of the monetary policy by the Vietnamese central bank, during a low-demand period for capital as production was stagnant.

According to VDSC, the most positive thing from foreign investors is that they are constantly putting money into new local exchange-traded funds (ETFs) such as FUEVFVND (tracking the VN Diamond index) and FUESSVFL (tracking the VN Fin Lead index). In May, FUEVFVND and FUESSVFL ETF issued 47.8 and 20.5 million shares, respectively, worth roughly VND780 billion (US$33.37 million).

While FUESVFVND ETF proved interesting since it was only listed in mid-May, FUESSVFL ETF has somewhat drawn foreign investors’ money after two months of listing. Another positive point is that concern about the largest domestic ETF in the market, E1VFVN30 ETF, may see withdrawals by investors to switch to the new local ETFs has been partially removed as issuing and redeeming activities of E1VFVN30 ETF was quite balanced.

In June, VDSC expected there are risks to the stock market, which do not have direct impact on Vietnam’s economic activities, but may affect market sentiment.

First, the complicated political situation in the world as US-China tensions are showing signs of escalating again and protests are rampant in the US and Europe.

The second risk relates to the potential outbreak of disease. Until a vaccine is available, this factor will not be ruled out. Although the number of new cases in reopened areas such as the US and Europe shows no sign of increasing, protesting can pose a significant risk of a spread.

Finally, US investors are betting more on the possibility of a decline in the near future. Despite the confusing political situation in the US, the country’s stock market has continuously increased over time. As a result, US investors are betting more on whether the market will decline as the number of short derivatives contracts has reached a record level since 2015.

Like the previous session Friday when it rose 0.77 percent, the index had immediately shot up by approximately 6 points within the first 30 minutes of trading and stayed in the green throughout the whole trading day.

According to securities firm BSC, the VN-Index could make a breakthrough this week to reach 915-920 points after hovering just below the 900-point resistance level last week.

The government’s imminent commencement of a tourism stimulus program for the economy is also expected to give stocks in related industries such as aviation, tourism and entertainment a boost, allowing them to continue their upwards momentum in the coming weeks, the BSC said in its latest report.

The VN30-Index for the stock market’s 30 largest caps this session rose 1.22 percent, with 25 tickers rising and three falling. These 30 stocks accounted for just over 50 percent of trading volume this session, unlike most of last month when investors were focused on non-blue chips.

Topping gains was MWG of electronics retailer Mobile World, up 4.1 percent, followed by HDB of private HDBank, up 3.2 percent, VNM of dairy firm Vinamilk, up 2.9 percent and TCB of private Techcombank, up 2.3 percent.

Vietnam’s three biggest state-owned lenders by assets were some of the poorer performers this session. BID of BIDV and CTG of VietinBank went down 0.5 percent and 0.2 percent, respectively, while VCB of Vietcombank rose by a marginal 0.1 percent.

ROS of construction firm FLC Faros, down 0.5 percent, was among the big losers.

Meanwhile, the HNX-Index for the Hanoi Stock Exchange, home to mid- and small-capped stocks, added 1.07 percent; and the UPCoM-Index for the Unlisted Public Companies Market rose 0.25 percent.

Foreign investors turned net buyers to the tune of VND110 billion ($4.74 million) on all three bourses. The most net bought stocks were PLX of Petrolimex and VNM of Vinamilk.

The Ho Chi Minh Stock Exchange (HoSE), on which the VN-Index is based, saw a fairly balanced session with 221 stocks gaining and 199 losing. Out of these, 15 stocks hit their ceiling prices, the highest they could go in a trading session.

Total trading volume rose marginally over the previous session, to VND11.68 trillion ($504.2 million), of which half went towards the VN30, a basket of the market’s largest capped stocks.

The VN30-Index for this basket surged 1.08 percent, significantly outperforming the general market, with 18 gaining tickers and seven losing.

Results in the public banking sector, however, were mixed. MBB of mid-sized Military Bank rose 2.5 percent, while of Vietnam’s three biggest lenders by assets, CTG of VietinBank was up 1.2 percent, BID of BIDV kept its opening price, while VCB of Vietcombank was the worst performer on the VN30, down 1.1 percent.

In oil and gas, GAS of energy giant PetroVietnam Gas and POW of electricity generator PetroVietnam Power both kept their opening prices, while PLX of gasoline distributor Petrolimex shed 0.4 percent.

In the other direction, the biggest losers included ROS of construction firm FLC Faros, down 0.9 percent, KDH of real estate developer Khang Dien House, down 0.7 percent, and FPT of IT services firm FPT, with 0.4 percent.

The HNX-Index for the Hanoi Stock Exchange, home to mid- and small-caps, climbed 0.83 percent, but the UPCoM-Index for the Unlisted Companies Market jumped 1.36 percent.

Foreign investors continued to be net buyers to the tune of nearly VND420 billion on all three bourses, with buying pressure mostly on VNM of Vinamilk, and the FUEVFVND, an exchange-traded fund replicating the performance of stocks on the VN Diamond Index, a bag of 14 stocks, most of which are blue chips.