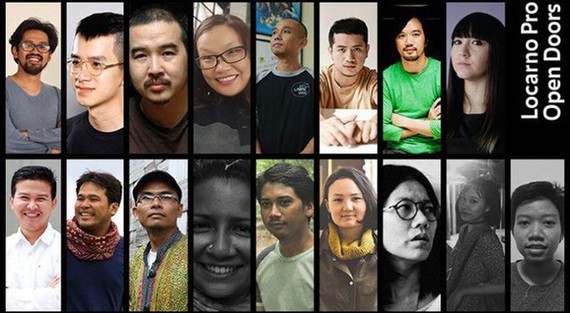 Contestants of the Open Doors at the 2021 Lorcano Film Festival
The movies, “Don’t Cry Butterflies” by director Duong Dieu Linh and “Who Created Human Beings” by director Le Binh Giang are two of eight feature film projects selected for the Open Doors Hub at the festival.
Female film maker, Nguyen Thi Xuan Trang will compete in the Open Doors Lab  for the title “Producing talent incubator”.
Last year, Vietnamese short film Thien Duong Goi Ten (A Trip to Heaven) by director Duong Dieu Linh was honored in the Pardi di domani short film competition at the 2020 Locarno International Film Festival. In 2019, she received the Le Moulin d’Andé-CECI Award at the 2019 Locarno Film Festival.
The 2019 Locarno International Film Festival also saw Vietnamese director Pham Ngoc Lan who was honored with the ARTE International Open Doors and Sorfond Awards for the film “Culi Never Cries”, and the film project “Tro Tan Ruc Ro” (Glorious Ashes) by director Bui Thac Chuyen and producer Tran Thi Bich Ngoc won the CNC Prize.
The Locarno Film Festival is an annual film festival held every August in Locarno, Switzerland. Founded in 1946, it is one of the longest-running film festivals, and is also known for being a prestigious platform for art house films. The festival screens films in various competitive and non-competitive sections, including feature-length narrative and documentary, short, avant-garde, and retrospective programs.

Contrary to Western tradition, Asian peoples like the Vietnamese don’t often name, define or “designate” the world, Dr. Ngo Tu Lap, director of the International Francophone Institute under Vietnam National University (VNU) in Hanoi told an e-conference, pointing out the intellectual risks inherent in such efforts.

Vietnamese culture, for instance, includes 54 different languages and customs, making any act of generalization reductive and controversial, according to Lap.

However, the leading scholar, who has published extensively in a variety of fields from fiction and poetry, translation to criticism and theory, highlights the need for naming and defining as a necessary, albeit imperfect tool.

“We should define and recognize our distinct characters, both good and bad, to know how to act accordingly,” Lap told the e-conference, titled “Naming Vietnamese Thought,” a well-attended event held as part of an ongoing series on philosophy by VNU’s public forum Scientist Links.

The event saw a diverse turnout that included foreign scholars, which Lap said was a delightful surprise and suggested public interest in the topic.

According to the scholar, in Vietnamese culture, big and small ethnicities have co-existed and interacted over a long course of history. Over the years, many authors have attempted to sketch this common culture’s characteristics.

In popular culture, famous journalist and translator Nguyen Van Vinh in the early 20th century listed 10 quintessential Vietnamese traits including “hard-working, but easily satisfied,” “creative, but lacking in far sight,” “dexterous, but not perfectionist,” “practical, dislike theorizing,” and “industrious, fast to learn, but seldom get to the bottom of things.”

The approach of Lap and his team, which he said was only preliminary and meant to lay a foundation, focuses on characterizing Vietnamese thought itself, differentiating it from other traditions, as well as locating its origin.

Despite its lack of defining authors whose ideas were written down in texts like Plato and Descartes in the West, Vietnamese culture has its thinkers whose thought may be characterized as practical rather than idealistic, emotional rather than rational, and collectivistic rather than individualistic, Lap noted.

He said Vietnamese thought, essentially comprised of “collective wisdom,” lies within the dialectical Asian framework that treats knowledge as the art of adaptation, rather than the discovery of objective truth as in the structuralist Western framework, and that to learn is to know, not to define.

While traditional Vietnamese research often identifies geo-cultural factors like natural conditions and means of production as the cause of Vietnamese thought, Lap emphasizes the easily neglected influence of language, especially grammar, a linguistic aspect that tends to remain stable over time.

For instance, different from synthetic Indo-European languages that have stringent rules about logic and word formation to indicate grammatical categories like gender, number and tense, thus to speak is to carry out a prepared plan, Vietnamese is an analytic language that more flexibly uses the order of words, which are monosyllabic and don’t change form, to convey syntactic relations.

So to Vietnamese, to speak is to respond to situations. One can always start a sentence with a word, then add one word after another almost ad infinitum to convey meanings, and along the way, simply change the grammatical functions of earlier words.

Doctor and Associate Professor Tran Thi Hanh, who teaches philosophy at the Hanoi University of Social Sciences and Humanities, also under VNU, pointed out young Vietnamese’s tendency toward individualism in contemporary culture, suggesting some change to Lap’s observation about Vietnamese community values.

According to Lap, not just in Vietnam but all over the world, human beings are increasingly becoming individualistic, attached to information technology and disjointed images, losing their distinctively human ability to think. This makes philosophy the most important subject that should be taught in Vietnamese schools, he stressed.

The rankings were released by Quacquarelli Symonds (the UK), with the participation of nearly 1,300 universities worldwide, up 10% from last year. It is the largest QS rankings so far.

Massachusetts Institute of Technology (MIT) has been ranked number 1 in the world for 10 years in a row and won perfect scores in research assessments and employer assessments.

Of the 1,300 universities in the ranking, Vietnam’s Ton Duc Thang University ranked in group 1001 – 1200 and Hanoi University of Science and Technology was named in the 1201+ group.

The ranking includes 305 Asian universities and 492 schools from Europe.

The criteria emphasize the contribution and impact of the university’s quality of training and research to society (through assessment of domestic and foreign businesses, scholars) and contributions to scientific research activities (via the number of citations/lecturers).

The thank-you letter of Deputy Prime Minister and head of the State Emergency Commission of Mongolia S. Amarsaikhan (Photo: VNA)

Hanoi (VNA) – Deputy Prime Minister and head of the State Emergency Commission of Mongolia S. Amarsaikhan has thanked the Vietnamese community in the country for their support to Mongolians in the COVID-19 fight.

In the thank-you letter, the Deputy PM affirmed that the gifts from the Vietnamese community have served as a great source of encouragement for forces who are working on the frontline of the pandemic combat in Mongolia , according to the Vietnamese Embassy in the country.

Earlier, the Vietnamese community raised a fund of over 10 million MNT (about 3,500 USD) to help Mongolia fight the pandemic that is developing complicatedly in the country.

The aid has made local headlines and applauded by Mongolian people./. 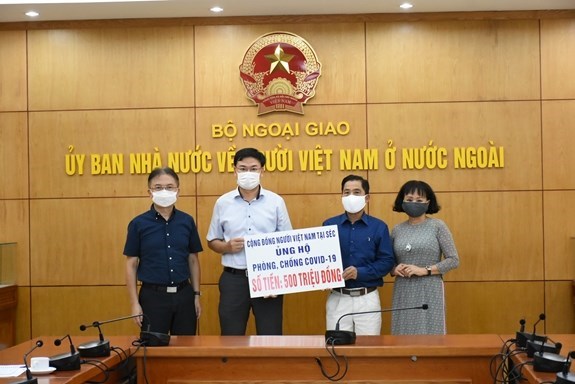 The State Committee for Overseas Vietnamese Affairs receives 500 million VND from the Vietnamese Association in the Czech Republic (Photo: VNA)

Hanoi (VNA) – The Vietnamese Association in the Czech Republic on June 11 granted 500 million VND (21,720 USD), donated by the Vietnamese community in the country, to Vietnam’s national COVID-19 vaccine fund.

President of the association Nguyen Duy Nhien said that through the funding, the Vietnamese community in the Czech Republic wants to contribute to the fatherland’s fight against the pandemic.

Thanking for the support, Vietnamese Ambassador Thai Xuan Dung asked Vietnamese people in the Czech Republic to continue to unite and support each other and well implement pandemic prevention and control measures.

Assessing Vietnam’s COVID-19 combat, head of the Union of Vietnamese Associations in Europe Hoang Dinh Thang expressed his belief that under the drastic leadership of the Government and joint efforts of all people, the pandemic will soon be put back in the country.

Also on the day, the Vietnamese Embassy in Great Britain and North Ireland launched a fundraising campaign in support of Vietnam’s COVID-19 prevention and control efforts.

Ambassador Nguyen Hoang Long affirmed that mobilising resources at home and abroad is extremely important because the fight against the pandemic is still prolong and arduous for Vietnam.

He called on Vietnamese representative offices in the UK, through their relationship channels, to inform their partners and the Vietnamese community in the UK and abroad about COVID-19 prevention and control in Vietnam, thereby mobilising practical contributions to this work in all forms, including connecting to vaccine sources and promoting the transfer of vaccine production technology./.

It went under the hammer at the ‘Asian Painters, Major Works’ auction, and had been expected to fetch only around €250,000.

“The luxuriant vegetation, made of banana leaves, apple blossoms and bamboo, underlines the tropical nature of the place. Pham Hau sublimates the bay thanks to a masterly work of blue and gold reflections, punctuated by the presence of junks and rocks.”

Hau (1903 – 1995) created a range of famous works. He demonstrated a profound grasp of both eastern and western artistic principles and philosophies through his paintings, while his poetic landscape compositions offer us a glimpse into the rich and complex Vietnamese culture.

In 2019, his lacquer painting ‘Cuu Ngu Quan Hoi’ (Nine Carps In The Water) fetched a record price of over US$1.1 million at a Sotheby’s Hong Kong auction.