Vietnam said it cannot help but mention the South China Sea because of its important position in the global supply chain.

Addressing the ADMM-Plus for the first time, Giang shared the same view with regional defense ministers, stating that “We all share the same opinion that peace, cooperation, and development remain a key trend, but there exist threats that are both traditional and non-traditional security ones.”

Regarding maritime security in the South China Sea, Giang said “We cannot help but mention the East Sea because of its important position in the global supply chain. Therefore, relevant parties must come up with appropriate solutions to ensure the legitimate interests of all parties.”

He went on to say Vietnam believed that all relevant parties need to strictly abide by the principle of resolving disagreements by peaceful means, on the basis of international law, including the 1982 United Nations Convention on the Law of the Sea (UNCLOS).

“It is necessary to implement the Code of Conduct in the East Sea (COC) effectively and substantively,” Giang noted.

He highlighted that the maritime forces must exercise utmost restraint, taking no actions that complicate the situation in any form.

As for off-shore fishing, Giang stressed the importance of humane treating towards fishermen in any circumstance at sea, noting that ensuring such actions will prove the defense officers themselves those working for peace.

The dialogue was officially launched on October 12, 2010 in Hanoi, marking a significant milestone in ASEAN’s history as it united the defense ministers of ASEAN and its partners for the first time and enabled the plus countries to contribute to the capacity-building in response to common security threats in the region.

At the 8th ADMM-Plus, ministers of 18 countries reached a joint declaration that reaffirmed the ADMM-Plus was an open and inclusive arrangement, with ASEAN at the center, allowing ADMM-Plus countries to contribute to dialogue and practical cooperation on security issues.

The ministers stress the importance of putting in place practical confidence-building measures for maritime security by exercising the Code for Unplanned Encounters at Sea and implementing the Convention on the International Regulations for Preventing Collisions at Sea 1972 to ensure a peaceful environment conducive to sustainable development and prosperity in the region.

They encourage the conduct of joint ADMM-Plus exercises amongst our militaries to build trust and confidence and to enhance our capability in addressing common security challenges.

Meanwhile, the member countries promote the pursuit of practical defense cooperation and initiatives that contribute to the defense and military establishments’ capacity to be future-ready for regional challenges, while caring for the well-being of the ASEAN people and ensuring shared prosperity for the region. 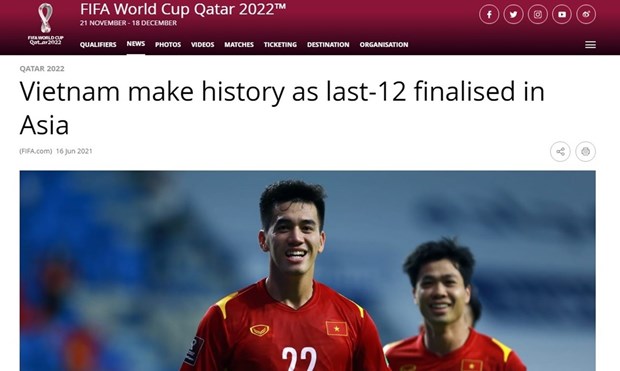 Hanoi (VNA) – Vietnam proved the biggest surprise packages by sealing maiden progression to the third round of the 2022 FIFA World Cup Asian qualifiers, FIFA affirmed in its article summarising the second round’s results.

The second round saw the emergence of Vietnam, the article wrote. “Having reached the last eight in the 2019 AFC Asian Cup, the team continued to make progress on the continental stage under coach Park Hangseo”.

Entering the back-end of the campaign as group leaders, the Vietnamese registered back-to-back victories against Indonesia and Malaysia and advanced as one of the best second placed finishers, despite narrowly losing to hosts UAE 3-2 in the concluder, it added.

FIFA also commended striker Nguyen Tien Linh. “A host of players announced stepped into the spotlight to help their respective teams through. Notable among them was 23-year-old striker Nguyen Tien Linh, who struck four times, including scoring the match-winning goal in the first-leg meeting against UAE, to help his side achieve breakthrough progress,” it wrote.

Prestigious statistics firm We Global Football assessed the chance for Vietnam to qualify for the 2022 FIFA World Cup is 4.44 percent.

Among the 12 teams, Vietnam ’s chances are just higher than China’s at 3.68 percent and Lebanon’s at 1.88 percent.

The draw for this round will be held in Kuala Lumpur, Malaysia, on July 1 instead of June 24 as initially scheduled./. 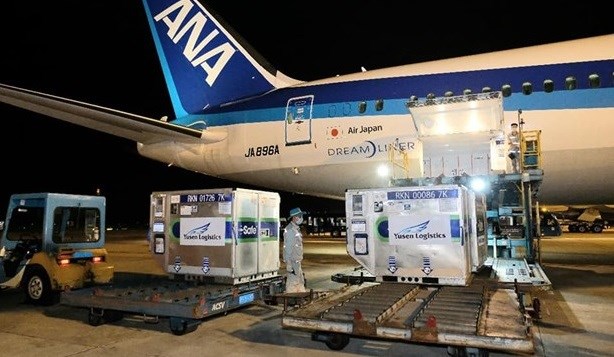 Addressing the event, Minister Long expressed his joy to receive the vaccine shipment as donation by the Japanese Government, saying that this gift is an example of the flourishing relations between Vietnam and Japan, especially amidst complicated developments of the pandemic and critical shortages of vaccines on a global scale. 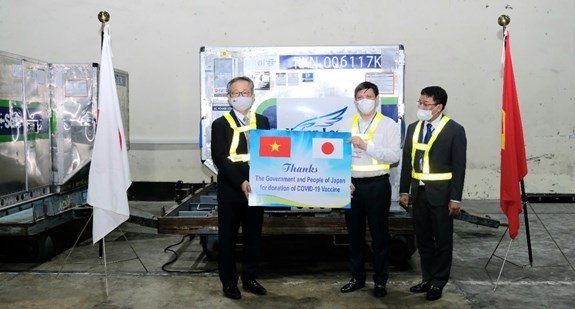 Vietnam is committed to effectively use of the vaccine as soon as possible, Long said, adding this batch of the vaccine would be transported to Ho Chi Minh City on June 17 morning to inoculate the people and workers in the southern city.

He also said that Vietnam is the first country in Southeast Asia that has received COVID-19 vaccine aid from Japan.

Japanese Ambassador to Vietnam Yamada Takio said the donation is a testament to the longstanding friendship between Japan and Vietnam, and Japan wishes to connect with the international community, especially with Vietnam, to overcome the pandemic. 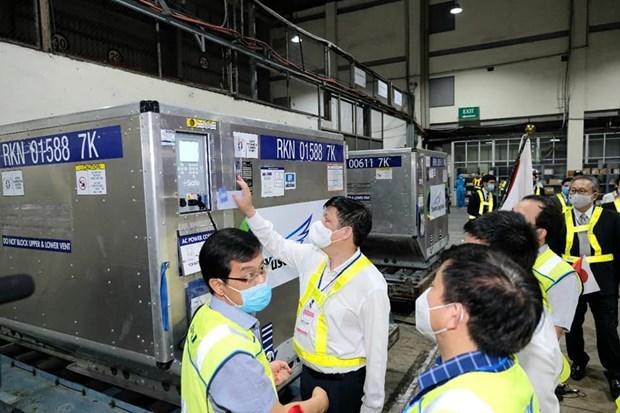 Minister of Health Nguyen Thanh Long has a look at the newly-arrived vaccine batch. (Photo: VNA)

During the meeting with the Japanese Ambassador on June 15, Prime Minister Pham Minh Chinh thanked the Japanese Government for the donation following his phone call with Japanese counterpart Suga Yoshihide./.

A decree with new regulations is set to take effect on August 1, but authorities have said they might give e-commerce platforms more time to prepare for taxation regime.

E-commerce platforms will need to provide authorities with monthly reports on their merchants, revenues, bank accounts and types of goods.

Tax officials had said earlier that the current taxation regime is unfair to traditional sellers who have to other overheads, while online sellers have been escaping several taxes.

Taxing sellers through e-commerce platforms would also help prevent the sales of contraband and fake goods, the officials said.

Vietnam’s e-commerce market expanded by 18 percent last year to $11.8 billion, the only country in Southeast Asia to record double-digit growth amid the pandemic, according to the Vietnam e-Commerce and Digital Economy Agency.

The 600-megawatt onshore project, the first wind farm in Laos, will be located in southern provinces of Sekong and Attapeu, the company said in a statement.

By installing a dedicated transmission line to Vietnam, power from the wind farm, which is set to begin commercial operations by 2023, will be sold to national utility Vietnam Electricity for 25 years.

It is expected that Vietnam’s growing economy will have high demand for power, especially during the dry season, when hydropower generation is limited.

The onshore wind farm is being developed as part of a memorandum of understanding on power interchange signed between the Vietnamese and Lao governments in October 2016.

It is expected to be the first cross-border electricity interchange from wind power generation in Southeast Asia.

“Joy is short-lived and challenges are approaching. The teams that we will face in the final round are one level ahead of us,” Park told South Korea’s Yonhap News Agency Wednesday.

Vietnam made a historic advance to the final round of 2022 World Cup Asian qualifiers despite losing to the UAE on Tuesday. Park didn’t coach the team in that game due to suspension.

“Australia beat Jordan 1-0 when Vietnam were still playing UAE. At the time, Vietnam’s advance was confirmed, so I was able to watch the game on the stand with confidence. We were conceding a lot, but in the second half the players performed better, so it was comforting to see. I wasn’t too excited although we advanced, because we lost the match.”

Park stayed humble about Vietnam’s goals in the final qualifying round.

“I already talked to the players. There is a big difference between the level of the final round and the second round. I know because I have been through it. There will be a lot of challenges, but I’ll try. It will be a valuable experience for the players to compete against Asia’s top teams.”

About the possibility of facing South Korea, his home country, Park said: “It’ll be better not to meet South Korea. It’s burdensome for me, because in terms of level and FIFA rankings, we cannot compete with them. But if we do, it will be a challenge and an honor for the team.”

In the press conference after the game with Malaysia last Friday, many misunderstood Park saying “that”s all there is to do in Vietnam.”

“Advancing to the final round of World Cup qualifiers was my biggest goal. What I meant to say was that I achieved it. My contract is until January next year and I want to fulfill it,” he explained.

Park also commented on the current state of Vietnamese football.

“It still needs improvement. Our team can use a nutritionist. We need more experts to run the national team. Ultimately, it’s a financial issue. But Vietnam is a country of football lovers, and its economy is developing rapidly, so football quality will also improve. Another advantage of Vietnamese football is that it has a willingness to listen and learn new things.”