Vietnam is to plant 1 billion trees from now to 2025 Vietnam to plant 1 billion trees by the end of 2025

The programme needs collaboration from the authorities, organisations and individuals. The government will call for funds and combine them with socio-economic projects. More trees will also be planted in rural areas, along the roads, industrial zones and tourist sites to ensure that there are enough green spaces.

The trees must be selected carefully to be suitable for each locality. In the rural areas, trees will be planted near the fields, canals, religious facilities, schools and places vulnerable to erosion and desertification.

The authorities will plant 180ha of forest in or 62 million trees per year. Different trees will be planted in different forests including protection forests and production forests. 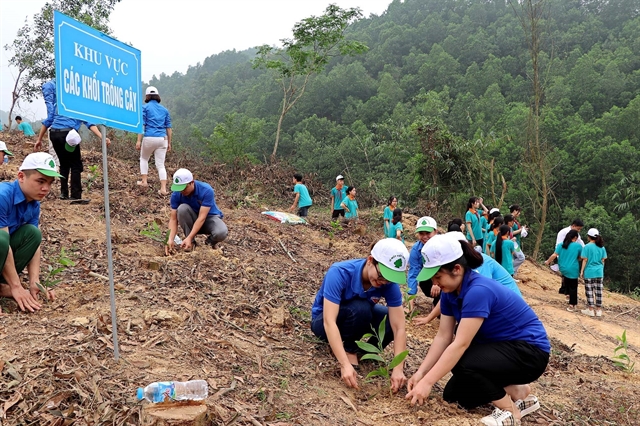 HÀ NỘI — The Government has approved a plan to plant one billion trees nationwide by the end of 2025.

Of the figure, 690 million trees will be planted in urban and rural areas and 310 million in protected, special and production forests.

The project was developed by the Ministry of Agriculture and Rural Development and approved by former Prime Minister Nguyễn Xuân Phúc last week.

The project aims to protect the ecosystem, improve the scenery, respond to climate change, boost socio-economic development, improve the quality of people’s lives and foster the sustainable growth of the country.

The effort needs collaboration from the authorities, organisations and individuals. The Government will call for funds from society and combine them with socio-economic projects.

More trees will also be planted in rural areas, along the roads, industrial zones and tourist sites to ensure there are enough green spaces. Trees will be selected and protected to ensure they grow and develop well and are suitable for the ecological conditions, planning and existing land fund of each locality.

Among 690 million trees in urban and rural areas, 138 million will be planted per year. Hardwood trees, which help enhance environmental protection, or rare and precious trees, will be given priority in these areas.

Trees with strong and firm roots will be selected in protected forest land as they can grow in harsh conditions and have good resilience.

High-yield trees, in combination with small fast-growing trees and long-lasting big trees, will be planted in production forest areas.

The Ministry of Agriculture and Rural Development has been tasked to be in charge of the work and work with the Ministry of Construction, the Ministry of Natural Resource and Environment, and city and province’s authorities to build annual and five-year plans to implement the project. — VNS

Of the total areas, 192 hectares were protection forests and around 31,305 hectares accounted for production forests.

Up to March 23, the country has collected VND825.8 billion (nearly US$36 million) from forest environmental services, reaching 29 percent of the 2021 plan and equaling 164 percent over the same period in 2020.

Under the agreement, Chinhphu.vn and VTV Digital will provide Novaland with support in communicating information about the 10-million-tree-planting program, with between 1 and 2 million trees to be planted in Vietnam this year.

Nguyen Hong Sam, Director-General of the Government’s e-Portal, said Novaland is the first company in the country to respond to the PM’s 1-billion-tree initiative. He hoped that the number of trees planted under the program will not just reach 10 million but go even higher.

He also pledged that the Government’s e-Portal and VTV Digital will continue to accelerate communications campaigns on the 1-billion-tree initiative around the country.

On February 21, Hanoi People’s Committee launched the tree planting campaign called “Tree-planting festival: Forever grateful to Uncle Ho” on the occasion of Lunar New Year and in response to the government’s program of planting one billion green trees in the period of 2021-2025.

Member of the Politburo, Secretary of the Hanoi Party Committee Vuong Dinh Hue and Minister of Natural Resources and Environment Tran Hong Ha attended the ceremony .

Speaking at the launching ceremony, Hanoi People’s Committee Chairman Chu Ngoc Anh affirmed: “Tree planting is held annually by Hanoi capital with the active participation of the entire political system including Hanoi authority and people from all walks of life. Thanks to that, over the past years, the city’s movement of tree-planting and afforestation has attained remarkable achievements.”

Following the great accomplishments of tree-planting campaigns in previous years, right from the beginning of 2021, the city units had focused on successfully completing the decoration of streets with trees, flowers, ornamental plants to celebrate the 13th National Party Congress and Vietnamese Communist Party Founding anniversary; creating a premise for carrying out the campaign “Embellishment and Development of Urban green tree system in 2021”; and responding to the program of planting one billion trees- period 2021-2025 launched by the Prime Minister.

Chairman of the People’s Committee of Hanoi Chu Ngoc Anh emphasized that “planting a tree is just the beginning; it is more important to take good care of it and let it grows well”. He added this is a responsibility of the whole society.

The Chairman of the City People’s Committee proposed districts and towns to widely disseminate among people about the purpose and meaning of the tree-planting campaign, the important role of the greenery, its long-term benefits and the humanistic values of planting, caring and protecting trees; local authority in districts and town need to launch the tree-planting ceremonies at their places in accordance with the conditions to ensure practicality, efficiency and avoiding formality.

At the launching ceremony, Minister of Natural Resources and Environment Tran Hong Ha affirmed that the program of planting one billion trees in over five years is a meaningful program.

Tree-planting festival is a long-lasting tradition on the New Year occasion that helps boost the green coverage in the nation that is listed among the hardest-hit by climate change.

The campaign has been well responded by different localities nationwide. Hanoi alone, plans to grow roughly 500,000 trees together with developing 27,756 ha of forest and forest land.

With the aim of building the capital as a “Green- Civilized- Modern” city, Hanoi Party Committee and authority determine that tree-planting and tending urban greenery system is one of the important tasks in the city’s annual socio-economic development plans.

Previously, the capital city has fulfilled its goal of planting one million trees two years ahead schedule. People have also planted 600,000 more urban trees on more than 250 roads, aiming to create beautiful landscapes as well as help prevent wind, dust and noise for the city.

Speaking at the ceremony, Prime Minister Nguyen Xuan Phuc emphasized: “This is a very meaningful program, as Uncle Ho once pointed out that “tree-planting is a less expensive but highly beneficial work”. And completing the “One billion green tree- planting program” means to well realizing the wish of President Ho Chi Minh”.

“Green is also synonymous with prosperity, is the color of fertility and sustainable development,” said the Prime Minister. Therefore, the Prime Minister proposed to officially select the message of “For a green Vietnam” as the motto of “One billion green tree-planting program”. “The Government and I hope that Phu Yen province will be one of the most active localities in implementing this project,” Nguyen Xuan Phuc emphasized.

Speaking at the ceremony, Board Chair Hoang Quoc Vuong said Vietnam had been experiencing increasingly serious impacts of natural disasters and extreme weather phenomena due in part to the loss of protective forest cover. “We need to raise awareness of the important role trees play in the context of global environmental pollution and climate change. Along with good treatment of emissions and wastes, planting more trees will limit pollution and protect the ecological environment to ensure sustainable development.”

Vuong called on all staff of the oil and gas sector to respond to the 2021-2025 tree planting initiative program, in accordance with Uncle Ho’s teaching, in order to properly implement the government’s directions as well as the group’s action program on climate change adaptation and mitigation in the 2018-2030 period.

“Leaders of the group and its organizations and units are committed to planting, protecting and tending trees; increasing investment and science and technology application in environmental protection in offices, factories and enterprises, and building an environmentally friendly PetroVietnam image,” Vuong said. He called for the message to be disseminated to each employee in offices, factories, construction sites and oil and gas rigs so they can contribute to the one-billion-tree goal.

Representing thousands of PetroVietnam’s youth union members and employees, Vu Thi Thu Huong, Secretary of the Group’s Youth Union, welcomed the initiative, noting that the ceremony coincided with the 90th anniversary of the establishment of the Ho Chi Minh Communist Youth Union. He thanked Vuong for the group’s trust in the young generation to preserve the 60-year tradition of the Vietnam Oil and Gas Industry, adding that the tree planting is in the interests of young Vietnamese to ensure the country’s future.