A ceremony marking the handover was held April 9 at the offices of the 3rd Regional Coast Guard in the southern province of Ba Ria – Vung Tau.

The cooperation between the coast guards of both countries has strengthened in recent years.

The U.S. has also sold a total of 24 Metal Shark high-speed patrol boats and is overhauling the USCGC John Midgett, another Hamilton-class vessel, to hand it over to Vietnam.

He said that Vietnam and the U.S. have worked together to implement a United Nations resolution on North Korea and to promote a common stance on the East Sea. The U.S. has assisted Vietnam in building its defense capacity, especially maritime capabilities, and supported Vietnam in sending peacekeeping personnel to South Sudan.

Referring to East Sea disputes, Kritenbrink had stressed that the U.S. always stood by its partners and allies in building an international order based on rules, and opposed ” the provocative actions of China with the other countries in the region.”

Three Vietnamese people who recently returned from abroad have tested positive for SARS-CoV-2, raising the total number of patients in the country to 2,784, the Ministry of Health reported on Sunday evening. 
According to the ministry’s report, the newly-reported patients include two men and a woman aged between 23-51 who returned from Japan, Angola, and the US. They were sent to quarantine areas in Khanh Hoa, Hoa Binh, and Bac Ninh provinces upon arrival and are now being treated at local hospitals and healthcare centres.

With these new infection cases, the number of Covid-19 patients in Vietnam has increased to 2,784, including 910 locally-transmitted cases reported since the new outbreak started in Hai Duong on January 28.

As of 6 pm on April 18, a total of 2,475 Covid-19 patients had recovered and been discharged from hospital. There have been 35 deaths, most of them being the elderly with serious underlying diseases.

The seventh Japan-Vietnam Festival (JVF) opened at the September 23 Park in Ho Chi Minh City’s District 1 on April 17 with a host of activities. Addressing the opening ceremony, Vice Chairman of the municipal People’s Committee Vo Van Hoan said he believes that the event will bolster understanding between the countries, and create more cooperation chances in education, trade, investment and tourism.


Japan is the third largest trade partner of HCM City and the fifth leading investor of the city. The southern hub has formed ties with seven Japanese localities.

Takebe Tsutomu, head of the organising board on the Japanese side said the holding of the JVF after a suspension of more than one year demonstrated efforts by both countries in promoting the bilateral relations. The 7th JVF is a major cooperative project of the countries’ tourism sector.

The two-day event features more than 100 booths of 75 units. Art programmes and sporting events will be staged by artists from both countries.

Along with Knapper – a career member of the Senior Foreign Service, class of Minister-Counselor, eight other diplomats have been nominated as ambassadors to represent the US in Somali, Algeria, Bahrain, Lesotho, Cameroon, Angola, Guinea-Bissau, and the Republic of the Congo.

Knapper earned his BA from Princeton University and his MA from the Army War College.

He speaks Japanese, Korean and Vietnamese.

President Biden had earlier nominated outgoing US Ambassador to Vietnam Daniel Kritenbrink to serve as Assistant Secretary of State for East Asian and Pacific Affairs.

Addressing the launch, Deputy Minister of Information and Telecommunications Hoang Vinh Bao said this marks a start of a series of events of this year’s Vietnam Book Day, a day to celebrate the reading habit nationwide.

Via the events, the organizers want to inspire a love for books among people around the country, encourage them to read more and make reading their habit, he said, adding that it will help spread the reading habit among the community.

A host of events, including a display of books about HCM City, a launch of books on digital transformation, and talks with renowned writers and poets, are scheduled on the Book Street from April 18 – 22.

Meanwhile, an online book fair is underway at book365.vn, featuring more than 70 domestic publishers and over 20,000 book titles. An online festival on book copyright will also take place from April 19 – 26, attracting around 50 domestic and international publishing houses. 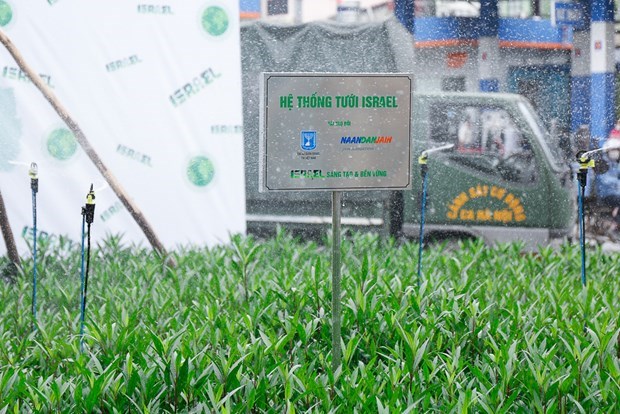 Hanoi (VNA) – The Embassy of Israel in Vietnam launched a solar-powered drip irrigation system at Bac Co Park in downtown Hanoi as a gift to the capital city in an event on April 18.

Speaking at the event, Israeli Ambassador to Vietnam Nadav Eshcar said the present demonstrates Israel’s commitment to supporting Hanoi and Vietnam at large in environment protection and creation of a green and clean living space.

Like other activities Israel is doing globally to respond to the Earth Day 2021, this aims to remind each person of valuable resources on the earth and encourage Vietnamese young people to contribute more to building a clean and green environment for their own future.