HCMC Book Street
The 8th Vietnam Book Day will open on April 18 in HCMC Book Street while the online event will also take place at the e-commerce trading floor at Book365.vn on April 17.
The book show will include exchanges between writers and readers; the introduction of books; seminars and discussions on the reading culture, the digital transformation in the publishing industry and the way of approaching book in the Fourth Industrial Revolution.
The 8th Vietnam Book Day will run until April 22 while the month long book show at Book365.vn featuring online booths of book distributors and publishing houses will end on May 15.
The online book festival will offer many promotional programs to readers. Businesses participating in the book show will offer coupon codes for discounts, rewards, free shipping, discounts on books and the shipping cost.
In addition, an event of Book Copyright will be also organized on the website Book365.vn from April 19-22 with the participation of local and foreign publishing houses.

A book festival is held at Hoa Lu Stadium in HCMC.
Six publishing houses of Tre (Youth), Thai Ha Book, Nha Nam, Minh Long, Dinh Ti and Saigon Books join hands organize a book festival at Hoa Lu Stadium at the No.2 Dinh Tien Hoan Street in HCMC’s District 1 from April 18-21. A series of interesting activities such as exchanges between writers and readers, book discussions, a place for fan to cosplay and dress-up as their favorite Harry Potter characters will be held during the event.
Another book show featuring a children’s painting contest and an introduction of the digital library, Let’s Read with more than 2,000 titles opens in the National Library in Hanoi from April 16-21. There is also an exhibition on activities promoting reading culture nationwide and outstanding books that were honored in the third National Book Awards
The Vietnam Book Day was approved in 2014 and it is scheduled to occur every year on April 21. The event is to encourage and promote reading habit in the community and raise awareness of using books as a tool for critical thinking. It also celebrates appreciation for readers, writers, publishers, distributors, and other affiliates of the publishing industry. 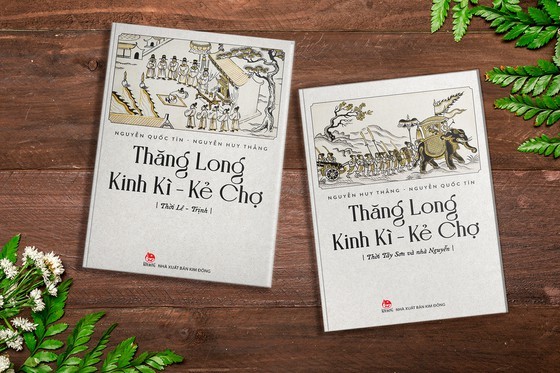 A new book on Hanoi in the past is released by the Kim Dong Publishing House.

By Quynh Yen, Mai An – Translated by Kim Khanh

Addressing the launch, Deputy Minister of Information and Telecommunications Hoang Vinh Bao said this marks a start of a series of events of this year’s Vietnam Book Day, a day to celebrate the reading culture nationwide.

Via the events, the organisers want to inspire a love for books among people around the country, encourage them to read more and make reading their habit, he said, adding that it will help spread the reading culture among the community.

A host of events, including a display of books about Ho Chi Minh City, a launch of books on digital transformation, and talks with renowned writers and poets, are scheduled on the Book Street from April 18 – 22.

Meanwhile, an online book fair is underway at book365.vn, featuring more than 70 domestic publishers and over 20,000 book titles. An online festival on book copyright will also take place from April 19 – 26, attracting around 50 domestic and international publishing houses.

Then Prime Minister Nguyen Xuan Phuc issued Decision No 284/QD-TTg on February 24, 2014, designating April 21 as Vietnam Book Day, in order to encourage a reading culture among the public.

The crowding was attributed to the rising demand for travel as Vietnam is about to commemorate the death of the Hung Kings, considered the founding fathers of the country, on Wednesday.

The airport’s current infrastructure fails to handle a large numbers of passengers at the same time.

From the very early morning, the security screening area, located on the airport’s first floor, was overcrowded with thousands of passengers queuing up for procedures including medical declaration, as a COVID-19 control protocol.

This situation has gone on for several days at the airport, with long queues of passengers inching forward in fatigue.

Such passenger congestion has happened not only in the screening area but also in some check-in counters of airlines, for many passengers had yet to complete their medical declaration.

Many passengers who were first-time flyers or who did not master how to make medical declaration nearly missed their flights.

Nguyen Khanh Hung, a 57-year-old passenger from Binh Duong Province, just outside Ho Chi Minh City, who checked in for a flight to Thanh Hoa Province in north-central Vietnam, said it took him a lot of time to fill out health declaration forms because of his old age and his ignorance of technological applications.

“It took me two hours to complete all procedures from medical declaration to security screening, as there were so many passengers.”

By noon on Sunday, the security screening stalls were still crammed with waiting passengers.