Vietnam is expected to secure 90 million doses of COVID-19 vaccine in 2021 and has already announced a list of target groups eligible to receive the first available shots.

The Southeast Asian country received its first COVID-19 vaccine shipment on February 24 – a batch of 117,600 doses of COVID-19 vaccine developed by AstraZeneca, a British-Swedish multinational pharmaceutical company, and the University of Oxford.

The Ministry of Health said last week that the country aims to obtain 90 million COVID-19 vaccine doses by the end of the year, including 30 million through the COVAX scheme co-led by WHO, 30 million through AstraZeneca, and the rest through negotiations with U.S. producers.

Prime Minister Nguyen Xuan Phuc has requested the Ministry of Health to begin COVID-19 vaccination for prioritized groups by the end of this week.

As soon as the proper logistics are in place, vaccinations will be rolled out in provinces and cities with ongoing pandemic outbreaks, urban areas with large populations, and important transport hubs.

Health workers and employees of steering committees for COVID-19 prevention and control in these localities will be among the first to be immunized.

Vietnam is also developing four COVID-19 vaccines on its own.

According to Resolution No. 21 issued by the central government on February 26, the target groups prioritized to receive COVID-19 vaccinations are:

– Those who work in essential service sectors including aviation, transport, tourism, and utility services

– People who must travel abroad for work or study

What do you want to know about Vietnam? Ask us at VietQ by Vietnam Life .

After over 117,600 doses of the Covid-19 vaccine produced by British drugmaker AstraZeneca arrived in Vietnam on February 24, the Ministry of Health assigned a specialized unit to check the vaccine.

It is high time to vaccinate Vietnamese people against Covid-19, Minister Long told a regular meeting held by the national steering committee for Covid-19 infection prevention and control today, March 5.

The vaccination will be conducted at 18 healthcare facilities which are treating Covid-19 patients. Those who directly participate in the treatment process will be prioritized for vaccination.

Besides, the 13 Covid-19-hit provinces and cities nationwide will be prioritized for receiving the vaccine, with Hai Duong Province identified as the top priority. Those vaccinated will be monitored through their online health records.

Some 1.3 million doses of the Covid-19 vaccine to be provided by Covax Facility are set to be shipped to Vietnam in April.

The Covid-19 vaccination will not be 100% effective against Covid-19, Minister Long said, adding that as such, the safety protocols should be maintained after the injection.

As planned, on March 6, the Ministry of Health will organize a conference to deploy a Covid-19 vaccination plan, offering a national training course for healthcare employees, the local media reported.

It received no request for subscriptions in the period, during which telecom giant Viettel welcomed over 24,600 new subscribers, according to the Ministry of Information and Communications.

Vietnamobile, which aims to attract subscribers with a low-cost strategy, often receives complaints of low signal even in major cities, the small number of branches and poor customer service quality.

In 2019, Vietnamobile and two other carriers accounted for just 4.61 percent of the market, while three state-owned giants Viettel, VNPT and Mobifone, claimed more than 95 percent, according to the ministry.

Vietnamobile has blamed its difficulties on the limited spectrum it receives compared to the three main competitors, which it says limits it from providing the best services to customers.

Another challenge the company faces is its limited resources and staff. Last year, the company recorded a profit of nearly VND60 billion (), compared to VND42 trillion by market leader Viettel.

Vietnamobile had also proposed the provision of a new spectrum last year; as well as approval for 5G testing. 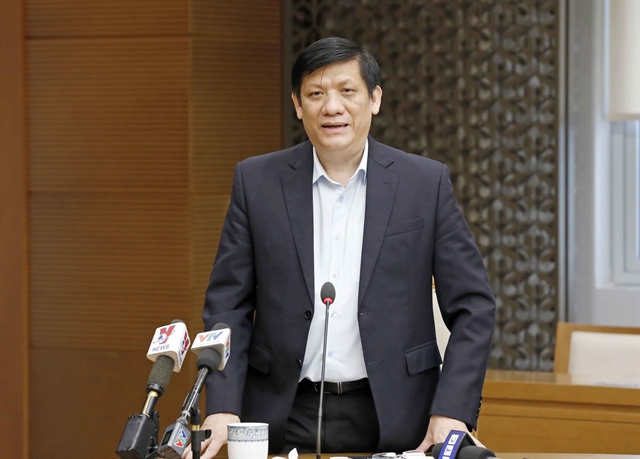 HÀ NỘI — Vaccinations using the recently-imported AstraZeneca COVID-19 vaccine are expected to start on Monday, Minister of Health Nguyễn Thanh Long informed a meeting of the National Steering Committee on COVID-19 Prevention and Control on Friday.

The first batch comprising over 117,600 doses of the vaccine manufactured in the Republic of Korea (RoK), arrived in Việt Nam on February 24 . After holding working sessions with the producer, Việt Nam has obtained an accreditation certificate for the batch from the RoK.

Long said the doses, verified by the ministry, met the conditions for vaccination in Việt Nam.

On Saturday, the health minister will chair a conference to launch the vaccination plan and provide training for medical staff nationwide in the use and storage of the vaccine, as well as the handling of post-injection complications.

According to the official, priority for vaccination will be given to people at the front line of the fight against COVID-19, including health, army, police, customs and immigration personnel; those working in sectors offering essential services like aviation, transport, tourism and education; people with chronic illnesses or above 65 years old; those living in pandemic-hit areas; the poor and beneficiaries of social welfare.

Those who get the shots will be monitored via digital health records and receive e-certificates for their completion of inoculation.

Five million doses of vaccines, mostly manufactured by AstraZeneca, are expected to be provided to Việt Nam this year through the COVID-19 Vaccines Global Access (COVAX) Facility programme conducted by the World Health Organization, GAVI, UNICEF and the Coalition for Epidemic Preparedness Innovations (CEPI).

Another 25 million doses under this initiative are slated to arrive in Việt Nam next year.

At the meeting of the National Steering Committee on COVID-19 Prevention and Control on Friday, Deputy Prime Minister Vũ Đức Đam said the safety of the vaccination programme should be ensured at the highest level as a task of utmost importance.

“The mass vaccination might have incidents. If we don’t prepare well, the incidents will turn into serious ones,” he told the meeting.

He urged for accelerating the research and production of locally-made vaccines, saying “the process must follow all of the requested steps but must be completed as soon as possible”.

Việt Nam has three local vaccine candidates, one of which has finished the first trial phase with good results and is in the second phase. The other two will enter human trials in the near future.

“If Việt Nam can successfully develop domestic vaccines, we can have enough stocks for the population of 100 million people. According to preliminary information, the COVID-19 vaccine only produces antibodies for a certain time. It is likely that the vaccines must be injected repeatedly every year. This is also an opportunity for Việt Nam’s vaccine study capacity to reach a new level in order to prepare and respond to other diseases that may occur in the future.”

“Vaccines are a long-term solution to control the pandemic globally in six months to one year. In spite of that, we must still strictly follow preventive measures as we have done,” he said.

Đam urged people to maintain their vigilance and asked schools, healthcare facilities, markets, supermarkets and hotels to self assess their safety level and update it on a COVID-19 safety map at antoancovid.vn .

Venues that fail to update the safety level will have their activities suspended, he said.

The Deputy Prime Minister tasked the health ministry, the ministries of foreign affairs, culture, sports and tourism with mapping out plans and creating conditions for those who have been vaccinated in other countries to enter Việt Nam in the coming time while still ensuring safety. — VNS 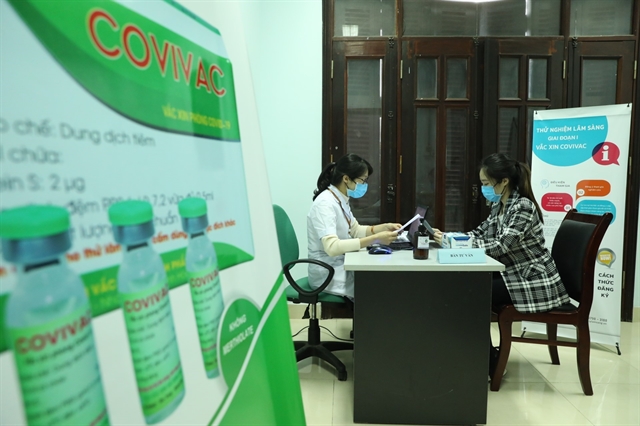 In the first phase,150 healthy volunteers will be injected with two 5ml doses over 28 days.

They will be divided into five groups, including one group provided with placebo shots, and their health will be closely monitored within 24 hours after injections.

Each volunteer will have their health checked up to eight times in 12 months.

After 43 days since the first phase starts and shows good results, the second phase will be carried out at the medical centre of Thái Bình Province’s Vũ Thư District, with 300 volunteers.

The homegrown vaccine has been developed by the Nha Trang-based Institute of Vaccines and Medical Biologicals (IVAC) and the Hà Nội Medical University since last May, using primary chicken embryo cell culture, a technique the institute used previously to successfully produce seasonal flu vaccines.

COVIVAC has undergone pre-clinical trials in India, the US, and Việt Nam, said IVAC Director Dr. Dương Hữu Thái, adding that results showed that it satisfies all conditions to be tested on humans.

The vaccine candidate demonstrated high immunogenicity during pre-clinical trials. It was created based on studies of new SARS-CoV-2 strains.

Volunteers can register to participate in the trial at the Hà Nội Medical University, submit applications to the email [email protected] or at the website http://duoclylamsang.vn, or call 02438523798-3188.

The first phase aims to evaluate the safety and immunogenicity of the vaccine.

Each selected volunteers would receive a small compensation for each time they go to Hà Nội Medical University for examination, and after they receive the first and second jabs.

Hanoi plans to vaccinate both residents and non-residents against COVID-19, Khong Minh Tuan, deputy director of the municipal Center for Disease Control (CDC) said on Thursday.

Addressing reporters’ questions at a municipal meeting on the same day, Tuan said authorities in the capital have been very proactive in sourcing coronavirus vaccine doses.

“On February 19, the municipal authorities sent a written petition to the Ministry of Health to ensure the city’s access to the vaccine source,” Tuan said.

The early request, according to him, is to secure adequate inoculation for all eligible citizens 18 years old and older in the capital.

“According to the priority order of the Ministry of Health, the shots will be distributed to 13 provinces and cities that have reported COVID-19 infections, including Hanoi,” said the Hanoi CDC deputy director.

The top priority will be given to Hai Duong, now an epicenter in northern Vietnam, Tuan explained.

“Therefore, the number of shots left for Hanoi will be limited,” he said.

“We will prioritize those in the anti-pandemic front line.”

Funds for the vaccination, Tuan said, can come from three sources, including the state budget, donations by individuals and businesses, and self-pay vaccine users, in accordance with the resolution of the government.

As scheduled, the Ministry of Health will organize vaccination training for the entire preventive medicine system of 63 provinces and cities on March 6.

Vietnam had spent nearly two months detecting zero community cases before it found the first one on January 27 and confirmed it one day later, according to the health ministry’s data.

A total of 879 local cases have been confirmed in 13 provinces and cities since then, making it the most serious wave to have struck Vietnam after the first-ever COVID-19 patient was announced in the country on January 23, 2020.

The country has recorded 2,488 coronavirus cases as of Friday morning, including 1,572 local infections and 35 virus-related fatalities, according to the Ministry of Health.