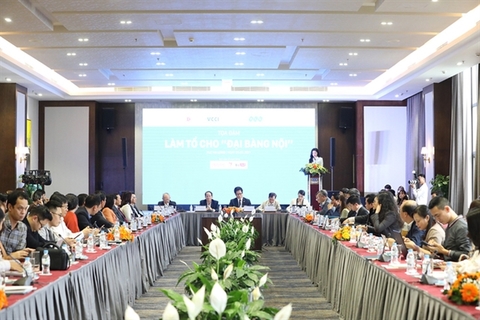 Private enterprises do not need money but institutional support to enjoy a stable and safe business environment, bringing them equality and respect.

Vu Tien Loc, Chairman of Viet Nam Chamber of Commerce and Industry (VCCI), made the statement at a conference held in the northern province of Quang Ninh on Friday.

Creating a transparent and equal investment environment among business sectors is always an important issue when discussing the disadvantages of the private sector, especially in accessing important resources such as the labour market, business rights and information.

After more than three years of implementation of Resolution 10, private businesses have become more protected. At the same time, there is also a better playing field for the sector when participating in economic fields. The private firms therefore have contributed to the economy as they attract about 85 per cent of the country’s total workforce while contribution to GDP is always over 43 per cent. Meanwhile, the contribution to GDP of the State economic sector and foreign direct investment (FDI) sector are 29 per cent and 18 per cent, respectively.

However, Loc said that domestic companies in many localities are not as highly appreciated as foreign firms despite creating value and jobs.

Many private businesses also said that when localities called for FDI, they commit to provide site clearance and are ready to be fined if they fail to meet the schedule as foreign investors often have high requirements. However, for domestic enterprises with even larger size than foreign companies, there is no such commitment, he added.

The chairman added that the private economic sector in Viet Nam has not only 8,000 businesses, but over 6 million, including business households. The first priority should be improving their quality, scale, efficiency and competitiveness not quantity. The entrepreneur’s desire is to have an environment for domestic businesses for their self-relianance and development.

Sharing the idea, Tran Dinh Thien, former director of the Viet Nam Economics Institute, said the FDI sector contributes 20 per cent of GDP but accounts for 70 per cent of the total import-export turnover. This could be an issue as FDI firms could enjoy most trade benefits from the country’s efforts in international integration.

“By studying economic development in some countries, we realise that the large corporations of South Korea account for about 50-60 per cent of GDP. If Viet Nam could build such businesses, they could lead strong economic development, being the wings for Viet Nam to take off,” said Vu Thanh Thang, Vice Chairman of Bkav Group.

He also proposed to choose outstanding enterprises with good competitiveness in technology; creating an environment for businesses to boom, in which capital, human resources, markets and policies are particularly important. Once there are products with a high localisation rate, the Government needs to create a springboard for this product to be popular and strongly developed in Viet Nam before reaching the global market.

Pham Dinh Doan, chairman of Phu Thai Group agreed, saying that there is a large proportion of small-and-medium enterprises (SMEs) in Viet Nam, but a lack of leading enterprises. The reason is that many units cannot be transparent and share their business activities, and it is difficult to accompany development.

“The Government needs to have a coherent plan for businesses to thrive in the next five to 20 years. In particular, there should be a policy to limit the number of units participating in some professions to avoid wasting resources,” he said.

Huong Tran Kieu Dung, vice chairwoman of FLC Group, said in addition to construction planning, infrastructure and human resources, the prerequisite factor to attract “eagles” as well as promote the strong development of investors is the behaviour and interaction between local authorities and businesses.

“If businesses receive a sincere welcome from the local government, they will feel sympathetic and secure when making investment. Investors always want to invest in a locality in the long term. Therefore, businesses are interested in how the investment process will be handled by the locality. This depends on the transparency in the direction of each province,” Dung said. — VNS

The proposal was made after the 3-year bus advertising contract with Japanese advertising agency Koa Sha Media ended this January.

Koa Sha Media was the only company that won the bid for a bus advertising package in 2017, allowing the company to advertise on the side of 492 buses for 3 years.

Since then, the transport department has made several changes to the advertising package for the auction, including allowing a flexible payback period and reducing the number of buses included in the package to attract small enterprises. However, all auctions were a complete failure, with not a single party bidding for the packages.

The failure is attributed to the fact that bus advertising is not as attractive as advertisements on social media and websites. It is also more expensive than other forms of advertising. Moreover, companies have to bid to be able to advertise their products on buses, which is a time consuming process.

The transport department has also said that the operations of buses have been unstable due to the Covid-19 pandemic and the city is in the process of replacing old buses and upgrading the public transport system. Thus, it has proposed to the municipal administration that the auctions for bus advertising be temporarily stopped pending a review on pricing the packages in accordance with demand.

HCMC currently has over 2,300 buses operating on 137 routes. If it is able to put ads on all its buses, it can earn over VND100 billion ($4.3 million) per year, it has been estimated previously.

Vietnam’s Prime Minister Nguyen Xuan Phuc on March 30 agreed to the Ministry of Health’s proposal on declaring Covid-19 a national epidemic given the fast and wide spread of the coronavirus in the country.

He asked people nationwide to stay at home, practice social distancing of at least two meters, and notably, to not to travel to other places in the context that people in big cities have been moving to the countryside for shelter against the pandemic.

State agencies and businesses are required to allow employees to work from home except for special units and manufacturing facilities.

The PM said this is a decisive time for the fight against the epidemic that requires all forces to participate in.

The PM said that the government will have a gathering on April 1 to discuss support to very low-income earners who face difficulties due to anti-pandemic measures.

He also agreed with the National Steering Committee on Covid-19 Prevention and Control to ask insurance companies to stop launching coronavirus-related insurance packages.

Earlier, at the PM’s order, Vietnam has closed non-essential services from March 28 until April 15.

In early February, Vietnam declared the national epidemic after the country found six infected cases, including one under human-to-human transmission.

According to media reports on March 8, the Hanoi city government asked for the Ministry of Health for a green light to declare Covid-19 an epidemic in the city after four coronavirus cases were confirmed, but no information has been announced.

As of March 30, Vietnam confirmed 203 people infected with SARS-CoV-2, including 55 cured. No death has been reported.

The latest figures compare to losses of 50.3 million euros in the first half of the club’s 2019/20 financial year, which runs from July 1 to June 30.

“The first half of the 2020/2021 financial year was heavily penalised by the spread of the Covid-19 pandemic and the consequent restrictive measures imposed by the authorities,” Juventus said of a season played with matches behind closed doors.

“The pandemic directly and significantly affected, above all, ticket sales and sales of products and licenses, with a consequent negative impact on operating income, net income and financial debt.”

Juventus noted the “positive trend of revenues from sponsorships and advertising” which were slightly higher than the previous year.

“These negative effects were partly offset by higher revenues from radio and television rights.”

E-commerce figures also grew by 60 percent to offset the decline in revenues from physical retail stores.

Considered one of the most beautiful islands in Kien Giang, Hon Son is a new hidden gem for nature-loving tourists. With its pristine beauty, graceful beaches reflecting the vast ocean, Hon Son appears as a sparkling jewel surrounded by coconut groves, with a wild look.

With limited infrastructure, islanders are highly sensitive to the environment, and use eco-friendly paper straws at coffee houses.

The best time to visit Hon Son island is from May to December when weather conditions allow for calm seas and fresh, cheap seafood.

To reach the island, visitors can fly to Rach Gia Airport from Hanoi or Ho Chi Minh City, and then catch an hour-and-a-half speedboat ride from Rach Gia pier. Alternatively, visitors can also travel by traditional ferry, which takes around 3.5 hours.

He said the certificate will be issued in a month’s time and that the matter is being discussed with the World Health Organisation (WHO) to ensure that the document is also recognised by other countries.
Malaysia launched the first phase of the National COVID-19 Immunisation Programme from February 24 on prioritised groups. The second phase is scheduled for April.
On March3, Malaysia reported 1.745 new COVID-19 infections, raising the total cases to 305,880, with 1,148 deaths.
On the same day, the Philippines reported 1,783 new infections, bringing the total count to 582,223. The Philippines’ Department of Health (DOH) reported that death toll has increased to 12,389, while the number of recoveries has been 534,778. The DOH earlier confirmed that the country found six patients infected with new variants of SARS CoV-2 that was first detected in South Africa, along with 87 cases positive to the variants originated in the UK.
Also on March 3, Director General of the Department of Communicable Diseases Control under the Lao Ministry of Health Phonepaserd Sayamoungkhoun said that there are 2,212 people undertaking quarantine in concentrated sites across the country.
So Far, Laos has detected 45 COVID-19 cases, including 42 recoveries.
Meanwhile, Thailand is considering measures to prevent the spreading of COVID-19 during the upcoming traditional Songkran festival amid the falling number of infections.
Culture Minister Itthiphol Kunplome said on March 3 that his ministry supported the return of traditional and cultural activities that were part of the festival before the pandemic struck.
However, there must be strict disease control measures in place, including social distancing and limits on the number of people at venues where activities are planned, he said.
Songkran activities will help stimulate tourism and the economy, now that COVID-19 vaccines were available, he said.
Meanwhile, Prime Minister Prayut Chan-o-cha said the government was considering what measures would need to be applied for the festival, to prevent Covid-19 from spreading again. Songkran is from April 13-15 this year.
As of March 3, Thailand had reported 26,108 COVID-19 infections with 84 deaths.