The Indian expert has been the third case retested positive after 14-day mandatory quarantine since April 29. The first case was a Vietnamese person while the second was a Chinese man.

An Indian man working in Hanoi has tested positive for the novel coronavirus after he was released from 14-day centralized quarantine in Vietnam.

The incident occurred when Vietnam is dealing with a fresh community outbreak.

The man, born in 1984, came to Vietnam on April 17 and was sent to quarantine at a hotel in the northern port city of Haiphong, where he stayed until May 1. During this period, he was tested negative twice on April 19 and 30.

After leaving the quarantine zone, he returned to Hanoi and stayed with his wife and kids at Times City, an apartment complex in Hai Ba Trung district.

On May 3, he took another Covid-19 test at a Vinmec healthcare facility, which was confirmed positive. He was then referred to the National Hospital for Tropical Diseases. Further tests are needed for him to be tagged a Covid-19 patient.

The man did not get out of his house after returning to Hanoi. Six people living in the house with him in the past three days have been isolated and sampled for testing, according to the Hanoi Center for Disease Control.

Vietnam has banned entry of foreign nationals since March last year and only allowed foreigners who have diplomatic or official passports or those who are experts, investors or high-skilled workers to enter the country.

All entering the country from abroad must stay in quarantine zone for 14 days and be tested twice during this period.

The Indian expert has been the third case retested positive after 14-day mandatory quarantine since April 29. The first case was a Vietnamese person while the second was a Chinese man.

In another case related to the novel coronavirus in Vietnam, a 26-year-old man living in Hanoi’s Bac Tu Liem district was confirmed with Covid-19 positive on May 4.

He was a passenger who sat near a group of Chinese experts on Vietnam Airlines flight VN160 from Danang to Hanoi on April 29. The Chinese group had come to work in Vietnam and one of them had later been confirmed to be coronavirus carrier upon arriving to their home country.

The group had so far infected 14 people, including 13 in the northern province of Vinh Phuc and one in Hanoi.

Hanoi has officially confirmed three Covid-19 community transmission cases since last Thursday, all linked to a coronavirus hotspot in the northern province of Ha Nam. The city has suspended non-essential services like bars, karaoke and dance clubs, in addition to street food vendors and cafes to prevent the disease from spreading.

For the ongoing community outbreak, Vietnam has confirmed 36 locally-transmitted Covid-19 cases in a fresh community outbreak that started on April 29 after the country had spent more than one month free of community transmissions.

The total number of coronavirus patients in Vietnam currently stands at 2,985, with 35 deaths.

Head of the Health Ministry’s Department of Preventive Medicine Nguyen Quang Tan this morning sent an urgent paper to directors of centers for disease control and departments of preventive medicine in cities and provinces upon the new regulation of quarantine. 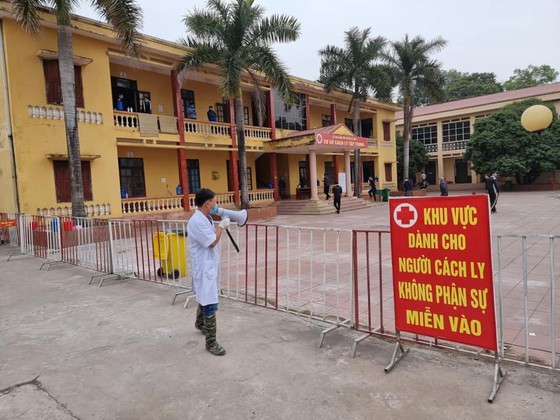 From May 4, people completing 14-day quarantine period asked not to leave

The document noted that following the Vietnamese Deputy Prime Minister’s direction, those who have finished their 14-day mandatory quarantine period with their negative test results two times still stay in the facilities because several people have tested positive again for SARS-CoV-2 after completing the mandatory quarantine period resulting in the spread of the disease.

According to the National Steering Board for Covid-19 Prevention and Control, this morning, Vietnam has 1,607 locally transmitted cases of the coronavirus. 40,505 people are being quarantined.

The violations of quarantine rules have caused the fresh outbreak of coronavirus in Vietnam.

Vietnam’s Ministry of Health on May 4 asked health authorities nationwide to extend the mandatory quarantine period after dozens of Covid-19 cases are infected from those who finished the isolation.

The new regulation will be applied from May 4 until further notice.

Directors of the Centers for Disease Control and Prevention (CDC) and the Preventive Medicine Departments in cities and provinces are required to suspend the discharge of people who completed the two-week quarantine even though they are tested negative for the virus.

The new move follows the resurgence of SARS-CoV-2 on April 29 in which three persons, including an Indian expert, a Vietnamese national and a Chinese expert, who completed the compulsory quarantine have infected nearly 30 others.

Vietnam has imposed the mandatory 14-day quarantine and required the next 14-day self-isolation with medical supervision at home by health authorities.

Dr Tran Van Phuc at Saint Paul Hospital in Hanoi said the 14-day quarantine is suitable as the majority of Covid-19 patients have a median time of five days from exposure to symptoms onset, only 10% have the incubation period longer but less than 14 days, and just few having the incubation of 21 days.

The resurgence of SARS-CoV-2 has forced Vietnam to activate the Covid-19 alert system, requiring all stakeholders to the fight against the pandemic.

People under quarantine must not leave their designated location for any reason.

People who finish the 14-day mandatory quarantine in Vietnam need to undergo another 14 days under medical supervision and testing to ensure safety amid the ongoing Covid-19 pandemic, according to the new protocols.

Those who complete the compulsory quarantine are required to be tested for the virus on the 7th day after ending the quarantine period. If tested negative for SARS-CoV-2, they are still under medical supervision. If being tested positive, they will be quarantined at the hospital.

It means that Vietnam demands no further quarantine period than the current requirement of 14 days but people who finish the quarantine would be strictly supervised for 14 days by health workers.

The content was released on May 5 by the National Standing Committee for Covid-19 Prevention and Control.

Home quarantine after the compulsory period is allowed but people need to notify authorities at their places and report daily their medical conditions to health workers.

During the self-quarantine, leaving the place is not encouraged but allowed if the person inform local police and health workers as well as follow the 5K-message (in Vietnamese) namely masking – distance – no gathering – disinfection – and medical declaration.

All people who have completed their 14-day quarantine period in Vietnam are required to remain at their quarantine facilities from 0:00 on Tuesday until further notice, the Ministry of Health announced.

The move was made after the country had recorded 37 local COVID-19 patients since April 27.

These infections were linked to two people who had completed their 14-day quarantine period in central Da Nang City and northern Yen Bai Province.

The two people had also met the condition of testing negative for the virus at least twice before being discharged from the centralized quarantine facilities.

Currently, 561 people are being quarantined at hospitals, 22,522 are being monitored at other facilities, and 17,422 are self-quarantining at home in Vietnam, according to the verified Facebook page of the Vietnamese government.

Vietnam has logged 2,985 COVID-19 infections, including 1,607 locally-transmitted cases, since the pathogen first struck the nation on January 23, 2020, according to the health ministry’s data.

Recoveries have hit 2,560 while 35 patients have died, most having suffered from critical pre-existing conditions.

Accordingly, all concentrated quarantine facilities have been told not to release people after they complete the 14-day quarantine period, and test negative for novel coronavirus twice.

This came after some people who completed their two-week duration tested positive for the virus after leaving quarantine sites.

The new quarantine measure is applied from 0:00 on May 4 until further notice from the National Steering Committee on COVID-19 Prevention and Control.

Most recently, an Indian expert, who works for local automaker Vinfast, has been confirmed with COVID-19 in Hanoi. The man, born in 1984, arrived in Vietnam on April 17 and was immediately put under 14-day quarantine at a hotel in Hong Bang district, the northern city of Hai Phong.

He tested negative for the virus twice during the mandatory quarantine period, and left for Hanoi on May 1 to stay with his wife and children at Park 10, Hoang Mai district’s Times City.

Authorities are actively tracing people having close contact with him for COVID-19 test and quarantine to prevent the virus spreading further.