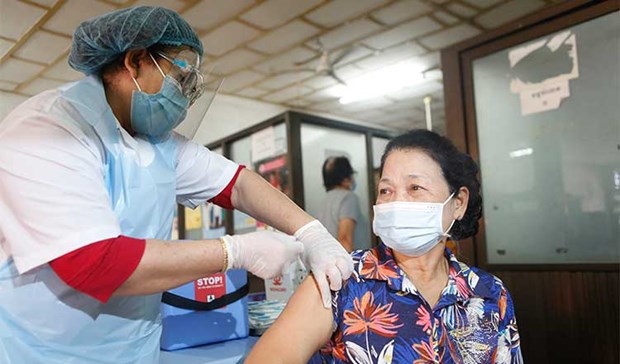 Under the ordinance, those who are required to be vaccinated include civil servants and armed forces in law enforcement agencies, elected officials and officials serving in the legislative body, judges, prosecutors and civil servants working in judicial agencies.

The ordinance also warns that those who avoid vaccinations will be disciplined, and clearly explains that the mandatory vaccination does not apply to individuals who have been confirmed by a health authority to be unable to vaccinate due to their health conditions.

In his message on April 10, Cambodia n Prime Minister Hun Sen announced that the Southeast Asian country will receive over 8 million more doses of COVID-19 vaccine from now to the end of 2021.

So far, as many as 678,406 Cambodian people and 216,903 military officers and soldiers have been given COVID-19 vaccinations. The country is using three COVID-19 vaccines namely Sinopharm, AstraZeneca/SII and Sinovac.

The country has so far recorded 4,238 COVID-19 infections, including 29 fatalities./.

Vietnam’s central-level authorities have announced new progress in the roll-out of protocols that would make it easier for international visitors and stranded Vietnamese with COVID-19 vaccination certificates, informally known as ‘vaccine passports,’ to enter the country.

The updates were announced in a Friday meeting of the National Steering Committee for COVID-19 Prevention and Control, which discussed plans to optimize economic development while maintaining public safety against the epidemic.

Durign the meeting, Dang Quang Tan, head of the General Department of Preventive Medicine under the Ministry of Health, declared that Vietnamese stranded in foreign countries, international investors, and foreign tourists will be prioritized in the first phase of ‘vaccine passport’ acceptance in Vietnam, provided they have had two jabs against COVID-19 as recommended by international health authorities.

The protocol will only be applicable to certain vaccine types and certificates-issuing countries, the Ministry of Health stated.

Health authorities will release the list of accepted countries, vaccine types, alongside guidance on quarantine and health monitoring for ‘vaccine passport’ holders in the near future.

For the first phase, tourists from countries who have successfully contained the epidemic and reached herd immunity after vaccination roll-out may be allowed to come to Vietnam, as long as they agree to stay in secluded resorts with limited exposure to the local community.

Meanwhile, representatives of IT solution firms stated in the meeting that they have delivered the task of building tech infrastructure for ‘vaccine passport’ systems.

“We’re in a race against time to prevent epidemic spread, while also rolling out vaccines and utilizing time for economic development,” a leader of the National Steering Committee for COVID-19 Prevention and Control said.

Earlier in April, the Civil Aviation Authority of Vietnam (CAAV) urged the Ministry of Transport to build a regime that would grant shortened quarantine to inbound travelers carrying coronavirus immunization certificates.

The Southeast Asian country has recorded 2,692 cases of COVID-19, with 2,429 recoveries and 35 virus-related deaths as of Sunday morning, according to the Ministry of Health’s data.

Vietnam recorded no new COVID-19 cases in the past 12 hours to 6am on April 11, keeping the total number of infections in the country at 2,692, said the Ministry of Health. 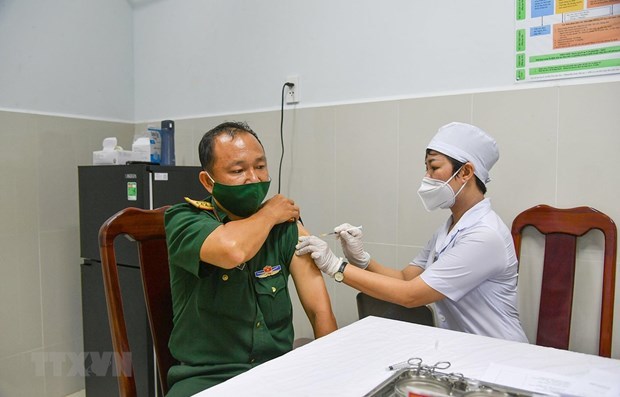 A medical worker at the Military Hospital 121 gets COVID-19 vaccine shot (Photo: VNA)

According to the Treatment Subcommittee under the National Steering Committee for COVID-19 Prevention and Control, 2,429 patients have been successfully cured, while the death toll related to the disease remained at 35.

By the afternoon of April 10, a total of 58,248 people, including medical workers, members of community-based anti-COVID-19 groups and members of the steering committees for COVID-19 prevention and control in localities, have been vaccinated against COVID-19.

To live safely with the pandemic, the Ministry of Health advised people to remain proactive in pandemic prevention and control by continuing to wear face masks when going out, disinfecting frequently, maintaining a safe distance, refraining from mass gatherings, and making medical declarations.

Vietnam could pay a costly price if the government decides to end anti-virus measures prematurely to save a few percentage points of GDP growth, said an expert.

Maintaining a positive GDP growth rate should not be Vietnam’s priority at this moment, as the ultimate goal is to protect the well-being of key economic components, including the people, enterprises, the banking – finance system and public trust, said Vu Thanh Tu Anh, dean of Fulbright School of Public Policy Management, Fulbright University Vietnam.

All these factors would help lay the foundation for Vietnam to recover from the current crisis, Anh said at an online conference on April 6.

With a small-sized economy and a high level of economic openness, it is not a surprise that Vietnam is highly susceptible to external shocks.

Moreover, the lack of development of supporting industries forced the domestic manufacturing and processing to source input materials from abroad, Anh said, adding when the pandemic causes a disruption to global supply chains, the majority of manufacturers are struggling with shortage of materials.

In addition to a 10-year low GDP growth of 3.82% in the first quarter, both industrial production and retail consumption suffered a plunge in growth.

Export growth recorded the all-time low of 0.5%, while import reverted to a contraction of nearly 2%, indicating companies are left with depleted input materials.

Anh predicted export growth in the second quarter may even lower when the world’s major economies, Vietnam’s key export markets, feel deeper impacts of the pandemic.

“Without timely and effective intervention from the government, some economic sectors and enterprises may collapse, resulting in severe consequences for growth, jobs and social issues,” Anh warned.

During this context, Anh urged the government to mobilize all resources to prevent the  health crisis from turning into an economic crisis. In that case, an economic recession is inevitable, Anh added.

Vietnam could pay a costly price if the government decides to end anti-virus measures prematurely to save a few percentage points of GDP growth, Anh urged.

Public trust is key in every move

Anh recommended current supporting policies should take into consideration long-term benefits, which could ensure a speedy recovery and healthy development of the economy in the post-pandemic period.

In terms of fiscal policies, Anh said the government should prioritize public spending on healthcare and the fight against the pandemic, as failure in this aspect could no doubt lead to an economic shock.

Anh urged more government spending on social welfare and essential services to ensure social stability, particularly as the poor and near-poor are highly dependence on such support.

Meanwhile, it is essential to support liquidity for commercial banks, which in turn are providing support for enterprises hurt by the pandemic.

Anh noted Vietnam could be more flexible in managing the exchange rate policy in a move to maintain export advantages, like other countries have done.

While the government should allocate a part of state capital for developing a Covid-19 vaccine, instead of waiting for others, public investment policies should aim at a dual target of stimulating the economy and nurturing recovery capability.

Fields such as IT, renewable energy, major infrastructure development projects, e-payment, and e-commerce should be of government priorities.

Anh, however, said public trust is of utmost importance in every government’s moves and play a key part for the success of macro policies.

One of the top priorities of the government is to prove that the government has acted appropriately and timely for the benefits of the people and enterprises.

With that in mind, once this crisis ends, the government could expect greater effects in any future policies, Anh concluded.