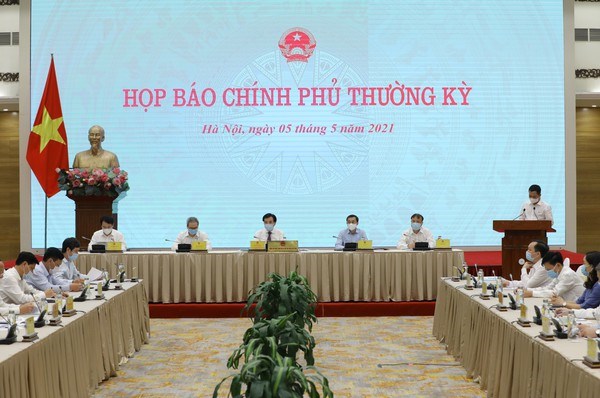 An overview of the Government’s regular press conference on May 5 (Photo: VNA)

Hanoi (VNA) – The Minister of Public Security has ordered a national examination campaign to discover illegal immigrants in Vietnam, the Ministry of Public Security’s Spokesperson Lieut. Gen. To An Xo said at the Government’s regular press conference on May 5.

Xo said that under the order, motels, hotels and accommodation facilities across the country will be examined, while the border guards will increase border patrols, and the police will seek illegal immigrants and launch legal proceedings against them and brokers of illegal immigration.

Illegal immigrants who are negative to COVID-19 will be returned to the places they departed, while accommodation facilities violating relevant regulations will have their licences revoked and receive administrative fines and even criminal punishments, he said.

According to the officer, since the beginning of the year, about 150,000 people have entered Vietnam, including 110,000 through land border gates, and 40,000 through flights.

The northern province of Dien Bien hands over 13 illegal Chinese immigrants to the Chinese side (Photo: VNA)

“It is crucial to drastically prevent illegal immigrants, as illegally entering Vietnam is violating the country’s sovereignty, causing high risks of pandemic outbreaks and affecting the livelihoods of Vietnamese people,” he stressed.

The officer added that the major method of organising illegal entry into Vietnam is contacting those wishing to enter Vietnam through the Internet before transporting them to the country.

As Vietnam shares a long border with neighbouring countries, it is easy to cross the land border, he said, adding that through the general examination campaign, localities will report to the ministry major methods of brokering illegal entry into Vietnam, thus put forth effective prevention and combat measures./.