This comes as the UKVFTA officially took effect from 23:00 on December 31, 2020, thereby signaling the beginning of a new phase in the relationship between the two countries, particularly with regard to the development of key commercial sectors. The UKVFTA will not only serves to create the liberalisation of trade in goods and services, but also helps to integrate many other important factors as part of green growth and sustainable development.

At present, the nation’s export staples to the UK include phones and components, garments and textiles, footwear, seafood, timber and wood products, computers and their components, cashew nuts, coffee, and pepper. In return, the country imports goods such as machinery, equipment, pharmaceuticals, steel, and chemicals from the UK. Indeed, imports and exports between the two are considered to be complementary as opposed to being competitive.

According to the Ministry of Industry and Trade (MoIT), 2019 saw the UK mainly import garment products, such as suits, jackets, blazers for women or girls, outerwear, gowns for women or girls, tights, pullovers heads, cardigans, giles, and similar items from the Vietnamese market.

With regard to footwear, despite ranking second in the world in terms of exports, Vietnamese footwear exports only account for 8% of global export turnover, while China makes up roughly 40%.

The UK is also viewed as a potential buyer of Vietnamese rice, with last year’s rice exports to this market witnessing a significant leap forward, with turnover growth reaching 376%. Despite this remarkable figure, the tariff on this item in 2019 remained high, therefore making it difficult to compete with other countries.

Concerning seafood products, the MoIT assessed that the country enjoys advantages in experience, production capacity, and abundant supply. Import demand for the UK’s seafood products remain fairly large, at roughly US$4.4 billion annually, while the country’s export value accounts for only 6.7%.

Vietnamese frozen tra fish, also known as pangasius, could be a benefactor of greater export opportunities to the UK as the nation is the leading supplier of the product, offering reasonable prices, whilst the production process of many Vietnamese firms is accepted by both the EU and UK markets.

For wood products, the UK represents a market that needs to import a large number of finished products and timber materials each year, whilst the country is currently the sixth largest wooden furniture exporter in the world with an export value of US$421.8 million, holding 3.6% of the UK’s import market share.

The UKVFTA was officially signed in London, the UK on December 29, 2020 and was applied temporarily from January 1, 2021.

This is the 3rd “new generation” FTA that Vietnam has signed with its foreign partners, helping maintain and further strengthen the economic – trade cooperation with the UK, which is one of the major and important partners of Vietnam.

Accordingly, the UKVFTA makes it easier for the two countries to further promote their cooperation in financial – banking services and e-commerce. In addition, it also promotes the protection of intellectual property, geographical indication, clean growth, and sustainable development.

In January 2021, the export turnover between Vietnam and the UK totalled over 657.3 million USD, up 78.57 percent year-on-year.

According to the agreement’s Article 9, the deal shall enter into force on the first day of the second month after the date of receipt of the Parties’ final notice on the completion of internal legal procedures.

With the exchange of official notes confirming the completion of internal procedures of both sides, the UKVFTA will officially take effect from May 1, 2021.

UKVFTA to officially take effect from May 1

HCMC – Vietnam will announce its ratification of the UK-Vietnam Free Trade Agreement (UKVFTA) to the UK side this month, so the agreement can officially take effect from May 1, 2021, according to the European-American Market Department under the Ministry of Industry and Trade.

The ministry has worked closely with the UK to complete the necessary procedures to help the deal come into force as soon as possible.

Vietnam and the UK signed the UKVFTA in London on December 29, 2020, after two years of negotiation. The agreement, which helps the UK replace the EU-Vietnam Free Trade Agreement after it completed its transition out of the European Union, temporarily took effect from January 1.

Data of the General Department of Vietnam Customs showed that in the first two months of 2021, trade between Vietnam and the UK reached over US$1.02 billion, surging 20.05% compared with the same period last year. The surge indicated the momentum created by the UKVFTA for the recovery of trade between the two countries this year.

Vietnam has brought Covid-19 under control, while the UK has rolled out mass Covid-19 vaccinations and has maintained a positive economic outlook, promising that economic and trade cooperation will continue to be a bright spot in the relationship between the two countries.

The UKVFTA not only boosts bilateral cooperation between Vietnam and the UK but also creates opportunities for the enterprises of both sides.

Vietnam holds high potential in exporting electronics, footwear, apparel, wooden and seafood products, for which the UK has high demand.

Meanwhile, the agreement will open up many opportunities for the UK’s firms in the finance, insurance, education, consulting, hi-tech, renewable energy and pharmaceutical sectors.

The Ministry of Industry and Trade will continue to collaborate with other ministries and departments to draw up plans to take advantage of opportunities brought about by the UKVFTA.

The book is expected to help Vietnamese enterprises grasp the import demands of the UK market, export opportunities for Vietnamese products as well as rules regarding business in the UK, distribution channels, payment methods and trade dispute resolution procedures in the country.

Addressing the ceremony, Ambassador Tran Ngoc Anh said that Vietnam and the UK have exchanged official notes announcing the coming into full effect of the UK-Vietnam Free Trade Agreement (UKVFTA) from May 1, 2021 after the deal was signed by the two countries in late December 2020.

The UKVFTA is a significant milestone in the bilateral relationship, marking an important development in trade and investment between the two countries. In the first two months of 2021, bilateral trade revenue increased by 20% after the signing of the UKVFTA, Anh said.

However, Ambassador Tran Ngoc An said that the two countries still have room to strengthen bilateral trade cooperation as Vietnam’s export revenue only accounts for about 1% of the UK’s imports.

He expressed his hope that the book will be useful, helping Vietnamese enterprises to better understand the UK market, and promoting the potential for trade cooperation between the two countries.

He also believes when the UKVFTA officially takes effect, it will create a strong driving force for economic-trade cooperation between the two countries in the future. 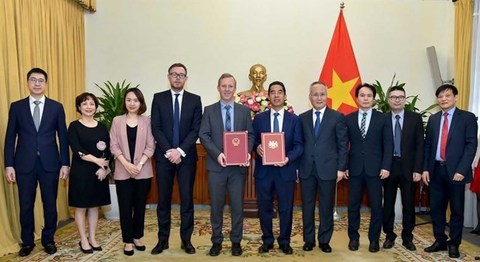 Representatives of Viet Nam and the UK hand over notes confirming the date when the UKVFTA comes into force. — VNA/VNS Photo

Viet Nam will announce to the UK side its ratification of the UK-Viet Nam Free Trade Agreement (UKVFTA) this month, so the deal can officially come into force from May 1.

According to the European-American Market Department under the Ministry of Industry and Trade (MoIT), the ministry has promptly and closely coordinated with the UK in the signing and completion of necessary procedures to put the pact in place as soon as possible.

The Vietnamese Government’s recent adoption of a resolution ratifying the UKVFTA will see the deal, which temporarily took effect from January 1, become officially effective.

Figures released by the General Department of Viet Nam Customs show that in the first two months of this year, trade between Viet Nam and the UK reached over US$1.02 billion, up 20.05 per cent year-on-year.

The figure reflects the momentum created by the UKVFTA to recover bilateral trade.

Economic and trade cooperation will continue to be a bright spot in the relationship between the two sides, given the UK has rolled out mass COVID-19 vaccinations and has a positive economic outlook according to international institutions.

After Viet Nam and the UK signed the UKVFTA in London on December 29, 2020, the two sides completed domestic procedures to temporarily put the pact in place from January 1 (Vietnamese time).

The MoIT will continue to coordinate with other relevant ministries and agencies to complete an implementation plan to bring into full play the opportunities generated by the agreement. — VNS 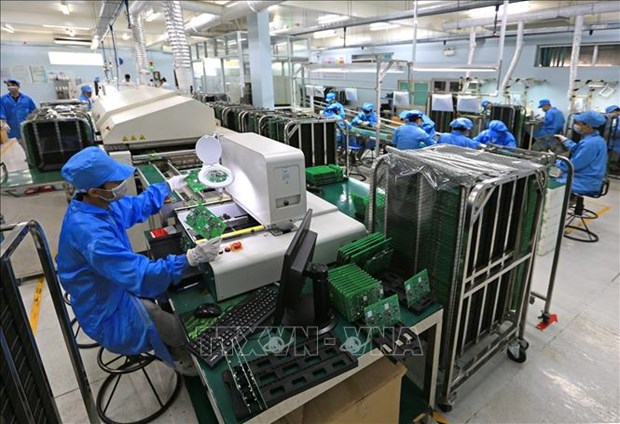 Hanoi (VNA) – The website Vietnam Briefing run by Dezan Shira & Associates on March 30 posted an article spotlighting Vietnam’s integration into the global value chains (GVCs) and the differences between the supply chain of Vietnam and those of other countries, as well as an overview of the country’s electronics sector.

The article noted that Vietnam has had increasing and steady economic growth of between 6 and 7 percent in the last decade. Its international trade and foreign direct investment (FDI) inflows have been growing and Vietnam has been outpacing its regional peers in this respect. Vietnam is mostly open to investment across sectors. Despite the pandemic, Vietnam is one of the few countries to report positive GDP growth of 2.91 percent in 2020.

Vietnam is a party to several free trade agreements (FTAs) which are push factors that can help it further integrate into GVCs. The ratification of the EU-Vietnam FTA and the upcoming UKVFTA and RCEP will help further its economy propelling its GDP growth, it said.

The government also supports R&D and the development of advanced IT systems as well as the manufacturing of ICT products. This will be a key theme as Vietnam gets more involved in IoT and 5G communications, according to the article.

It held that the electronics industry can be grouped by Harmonized System (HS) codes in three groups. These include finished products that consist of 3Cs – computer, communication and consumer electronics, subassemblies and components which include electronics components. In 2019, the total export value reached 2.5 trillion USD in 2019.

According to the article, Vietnam had strong growth of around 20 percent for electronic finished products surpassing Thailand and just behind the Republic of Korea in export assemblies in 2019.

Vietnam joined GVCs in the late 2000s and is considered a global tier-2 supplier for 3C products. The top importers for electronics were China, the US, followed by Hong Kong.

The 3Cs finished products group dominates the Vietnamese electronic industry, with communications equipment and consumer electronics leading. While 3Cs dominate Vietnam’s electronics, Vietnam’s role in the global electronics value chains is limited to be an integrator of components, it said.

GVCs can be broken down further into three parts, upstream, midstream, and downstream activities. Vietnam is mainly integrated in the midstream part with lower value add. These include subassemblies, such as displays and special parts, and finished products such as consumer electronics, communications, and computers. Vietnam is also involved in upstream activities but predominantly in low-value added products such as plastic, glass, and packaging.

The article pointed out that Vietnam still needs to do more to integrate into GVCs and faces several challenges in logistics and infrastructure. There is a gap between raw materials and finished goods. The logistics industry is highly fragmented with more than 3,000 logistic companies. These consist of small and medium enterprises providing low-value services. Goods in Vietnam have to go through many intermediaries from raw materials to delivery, increasing transaction costs. In addition, the connection between different modes of transport is weak as well.