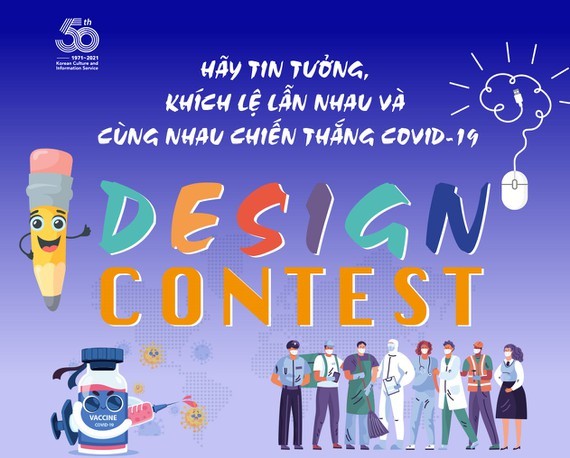 The epidemic situation is still complicated. As of June 14, globally, there have been more than 176 million confirmed COVID-19 cases, including 10,000 patients in Vietnam and 148,000 in South Korea.
The pandemic has impacted every aspect of life. The frontline forces worldwide are working day and night to fight Covid-19 pandemic.
The competition aims to encourage people to spread beliefs in overcome challenges to win the war against Covid-19.
Best entries, including posters, graphic design, and illustration will be selected for the award ceremony and exhibition that is expected to take place in August at the Korean Cultural Center in Hanoi.
Ambassador of the Republic of Korea to Vietnam, Park Noh-wan said that Vietnam and the ROK are important partners of each other in various fields over the past 30 years. He believed the design contest will give an opportunity for the people of the two countries to join hands to build a strong friendship and win the battle against coronavirus.
People access the Web at https://www.facebook.com/vietnamkcc for further information.

By Mai An – Translated by Kim Khanh

Hanoi (VNA) – The Vietnam Festival of Creativity & Design (VFCD) 2021 kicked off on June 14, offering a venue for sharing diverse creative experiences, promoting connection among those interested in and passionate about creativity and design.

The event, which lasts until July 18, is organised by RMIT University in Vietnam, in collaboration with the UN Educational, Scientific and Cultural Organisation (UNESCO), the Vietnam National Institute of Culture & Arts Studies (VICAS) and COLAB Vietnam.

The contest is open to students, creative practitioners and those who express their interests in Vietnamese culture and creativity aged 18 to 30.

It allows participants to submit their designs as individuals or groups of maximum three members.

The assessment is based on five criteria including creativity, innovation, symbolic thinking, branding orientation and inspiration./.

Illustrative image (Photo: Internet)
Hanoi (VNA) – The organising board of the Miss Eco Vietnam 2021 pageant has launched an online photo contest with the aim of discovering local beauties who can help spread a positive message of environmental protection for the wider community.

Entrants must be Vietnamese girls aged between 18 and 26 who are above 1.65 metres tall. All hopeful candidates must send their profiles to the organizers at [email protected] before July 31, the Voice of Vietnam (VOV) reported.

Since the online photo contest was launched on the page https://www.facebook.com/hoahaumoitruong.vn/, the organizers of the competition have since received hundreds of entries from across the country.

The grand final of Miss Eco Vietnam 2021 is scheduled to get underway on October 20 in Ho Chi Minh City.

The winners will then take part in various environmental protection activities hosted by the Ministry of Natural Resources and Environment during the duration of the year and into 2022.

The beauty contest is organised on a national scale with the primary aim of responding to an initiative put forward by the Prime Minister to plant one billion trees between 2021 and 2025./. 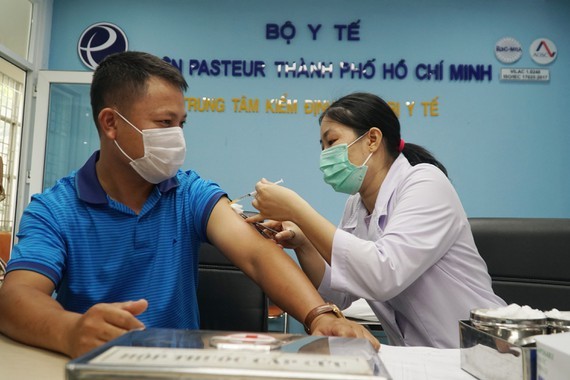 The municipal People’s Committee has just submitted a report to the Prime Minister on the purchase and use of a Covid-19 vaccine as the Covid-19 epidemic in the large city has developed unpredictably with increasing infection cases plus new virus strains first reported in the UK and India.

The city has mobilized many staff members and employees of different sectors including medical workers, local authorities, agencies, departments, dwellers in the fight against the epidemic.
Currently, Ho Chi Minh City has over 7.2 million people aged 18 and over. Approximately 1.6 million workers and employees are working at enterprises and corporations in industrial parks; however, HCMC has been only allocated around 140,000 doses of Covid-19 vaccine so far. 10,179 people in priority groups have been fully vaccinated while 64,366 people received one Covid-19 jab only.
To achieve the goal of herd immunity with over 70 percent of the population being vaccinated against Covid-19 as soon as possible, the city must necessarily purchase Covid-19 vaccines.
Following the Prime Minister’s direction “Fighting the epidemic like fighting the enemy”, the city People’s Committee proposed the Prime Minister to allow businesses citywide to find vaccine sources in the world or hire competent enterprises to buy vaccines for vaccination.
According to the city’s proposal, businesses should be allowed to hire medical facilities to administer the vaccine to employees upon the agreement between businesses and health care institutions.

A number of programs will be organised to celebrate the 86 th anniversary of Vietnam’s Revolutionary Press Day, June 21 st .

The event will be broadcast live on HTV9,

Meanwhile, from June 18 th to 21 st , Dam Sen Cultural Park will hold a drive of musical exchange with journalists who have received awards in the contest, “Singing of Journalists”.

Earlier, on June 17 th , photographer Hoang Minh Quoc introduced his book, “The Charm of Vietnam” and exhibited his photos to raise money for the “Fund for Agent Orange Pain” launched by Vietnam News Agency, in Ho Chi Minh City.

Another book, “Editing Eye”, translated by Tran Duc Tai, will be released on this occasion and an exchange between the translator, journalists Tran Trong Thuc, Le Xuan Trung and Dang Tam Chanh, with students will take place on June 22 nd at the University of Social Science and Humanity, Ho Chi Minh City.

Of particular note, a special prize will be awarded for the first time ever, according to Thuan Huu, Chairman of the Vietnam Journalists Association (VJA) and Chairman of the National Press Awards Council.

This is also the first edition of the contest to see the participation of all 63 journalist associations around the country.

The 150 submissions reported on multiple issues in politics, socio-economic development, and security and national defense, especially Party congresses at all levels leading up to the 13th National Party Congress, as well as the fight against COVID-19, natural disasters in the central region, and drought in the south, among others.

The 15th National Press Awards ceremony will be held during the upcoming 11th Congress of the VJA in Hanoi.