Bat Trang Pottery Museum is located in Village No.5, Bat Trang Commune, Gia Lam District, Hanoi, about 15km from the centre of the capital. Construction commenced in 2018 on an area of 3,700 square metres. The museum is a part of the project “Quintessence of the Vietnamese craft village” of Quang Vinh Ceramic Co., Ltd. and the Hanoi Handicraft and Craft Villages Association with the aim of developing the craft village. From the museum, visitors can see Bac Hung Hai Canal on the opposite side. Built at a cost of VND150 billion, the museum is expected to be put into operation in June.

The museum consists of seven funnel-shaped buildings which are intertwined together, their outer walls carved into multi-layered patterns that forms a unique work. The design is said to have been inspired by pottery wheels – the signature tool of potters. From another perspective, it is like the image of a giant ancient pottery kiln of the ancient Bat Trang people. The work also makes the most of Bat Trang Village’s ancient materials such as traditional ceramic tiles, mosaic tiles and baked tiles that bring the most authentic colours to the museum.

Showroom displaying and selling ceramic products in the museum.

The museum has three exhibition floors. The first floor is an area for artists to display their most valuable works, thereby connecting visitors with artisans. The floor is also a suitable place for activities and big events about the ceramic. Additionally, because the open space is very large, it is very suitable for programmes, big events or traditional cultural festivals.

The 2nd and 3rd floor – the central area of the Bat Trang Ceramic Museum is the area to display artistic ceramic products throughout the process of formation and development of the Bat Trang ceramic village, including the types of ceramic glazes, from ancient to modern, with the changes in colour, shape and decorative motifs on ceramic products. The area helps visitors to gain an overview of the history of the craft village.

Meanwhile the rooftop has an outdoor theatre with stages reserved for events and performances. There will also be spaces for restaurants and cafes as well.

In addition to the idea of creating a space displaying handicraft products of the craft village and connecting traditional handicrafts, the museum is also expected to become a place to honour the craftsmen. The museum is considered as a traditional house, preserving and introducing all the cultural values of the Bat Trang ceramic village to visitors.

Although not yet officially put into operation, the museum has attracted many young people to visit because of its unique architecture. Duong Thi Nga (a student from Hanoi University) shared: “I really like the unique architecture of the museum. The swirls are designed to grow upwards, creating the feeling of being lost in some majestic canyon. I will definitely be back in June”.

In terms of vehicle origins, the past month has seen sales of domestically-assembled vehicles reach 17,140 units, a climb of 99%, whilst CBU imported cars stood at 13,795 units, an increase of 177% compared to one month earlier.

The opening three months of the year witnessed VAMA members selling a total of 70,952 cars, an annual rise of 36%, with passenger cars climbing by 34%. In addition, the sales of commercial and special purpose cars also witnessed respective increases of 43% and 17% compared to the same period from last year.

According to the sales announcement given by VAMA, TC Motor, and VinFast, the local auto industry saw the consumption of 40,072 vehicles of all types in March.

Most notably, Hyundai remained as the leader in terms of car sales among auto brands within the domestic market, with a total of 6,807 units sold, trailed by Toyota, Kia, Ford, Mazda, and Honda.

Along with VAMA members, brands such as TC Motor, Audi, Jaguar, Mercedes-Benz Land Rover, Subaru, Volkswagen, and Volvo also have a presence within the country, although they have chosen not to disclose their business results.

According to experts, following the overall purchasing power of the auto market dropping by 22% in February due to the Lunar New Year holiday, the industry as since prospered with a rise of 127% compared to the previous year, thereby bringing the overall increase recorded in the first quarter to 36% on-year.

This level of growth can mainly be put down to numerous car manufacturers launching new models or upgraded versions of vehicles, with numerous promotions and discounts on offer, in addition to the novel coronavirus (COVID-19) pandemic situation being brought under control within the country.

Furthermore, the vaccination process is also underway in many localities, coupled with the reopening of the domestic tourism market as a means of contributing to boosting domestic purchasing power.

According to the Vietnam Timber and Forest Product Association (VIFOREST), the prices of imported wood have increased by 20-25 percent; The prices of auxiliary materials, such as glue, paint, and paper, have also inched up by 10-20 percent compared to last year. This has made the cost prices of products go up, causing difficulties for manufacturing enterprises.

Ms. Le Thi Xuyen, CEO of Thuan An Wood Processing Joint Stock Company in Binh Duong Province, said that every time the price increases, the company must continuously adjust the prices following the production costs. Most of the raw materials for the production of wooden products must be imported from abroad. Due to the Covid-19 pandemic, many countries, such as the US and Europe, had to carry out social distancing and temporarily suspend exploitation, production, and processing.

As a result, the source of raw materials has gradually been exhausted. However, the demand for wooden products has increased, while the logistics costs have also climbed. On the other hand, foreign orders usually require that the surface material of products must be pine and oak wood, and the inside is mainly acacia wood and rubberwood of Vietnam. 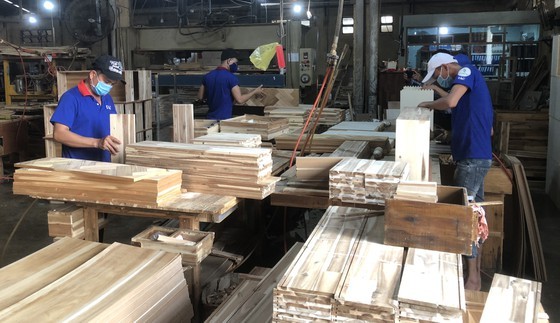 Rubberwood production at Thuan An Wood Processing Joint Stock Company in Binh Duong Province. (Photo: SGGP)
Not only the wood industry, but many imported agricultural materials have also seen price hikes, such as fertilizers and animal feed. The representative of a livestock company in Dong Nai Province shared that after the Lunar New Year, the price of chicken feed increased by more than VND2,000 per kilogram, so the cost price is currently at VND11,000 per kilogram, while the selling price of chicken is about VND20,000 per kilogram. Veterinary products have also risen.

Last year, because domestic chicken prices fell, the company was unable to compete with imported chickens, so it had to reduce the chicken flock by more than 40 percent. Instead, it has raised pigs to cover the loss. If the situation remains pessimistic, the company will cut another 20 percent of the total flock to maintain operations. According to Tien Phong Pig Farming Cooperative in HCMC, in the past six months, the price of animal feed had increased five times, with a total increase of more than 20 percent because animal feed was mainly imported.

It is recorded that at the beginning of March this year, at agents of Ca Mau fertilizer in the South, urea fertilizer is being offered by the factory for VND8,500 per kilogram, lower than that in the region and the world, but has increased by about 20 percent compared to the end of last year.

According to Ca Mau Fertilizer Company, to contribute to stabilizing the fertilizer market, in the summer-autumn crop this year, the company plans to supply 190,000-230,000 tons of fertilizer to the market, meeting the needs of farmers in Southern provinces.

Besides the efforts of the production department, the company has proactively rescheduled the delivery of export orders to other countries to prioritize the distribution of fertilizers in the domestic market. In addition, the company has researched to improve and launch new product lines to help plants to grow well, save costs, increase profits, and increase productivity.

According to Mr. Le Quoc Phong, Vice Chairman of the Vietnam Fertilizer Association, the prices of imported fertilizers increased because the raw material-producing countries had temporarily carried out social distancing due to the Covid-19 pandemic. Many agricultural countries have resumed production and increased the import of fertilizers. On the other hand, for having to comply with signed contracts, many domestic fertilizer companies must export fertilizers, causing a shortage of fertilizers for domestic consumption.

Therefore, the Ministry of Agriculture and Rural Development needs to participate in managing and forecasting the needed fertilizer output of the whole country. The Ministry of Industry and Trade should have a plan for importing and consuming fertilizers nationwide, aiming to regulate the market.

Mr. Nguyen Thanh Son, Chairman of the Vietnam Poultry Association, said that the lack of animal feed was because some foreign enterprises had collected, hoarded, and reserved raw materials for the production of animal feed, so the hike in prices of animal feed was unavoidable. From now until the end of the year, animal feed prices would continue to escalate.

Therefore, enterprises need to adjust the selling prices and production scale accordingly. In the context that the domestic livestock industry is developing, the State needs to make a plan to develop raw material growing areas for the production of animal feed. For instance, it is possible to develop models of growing corn or producing animal feed from by-products in seafood processing.

According to the Handicraft and Wood Industry Association of Ho Chi Minh City, at present, foreign orders are mainly processing under signed contracts, many countries only require the production of wood types in the orders. Obviously, this is a good opportunity for Vietnam’s wood manufacturing industry to thrive. Currently, Vietnam’s acacia wood and rubberwood are of good quality with plentiful supply, that can replace pine and oak wood. Moreover, Vietnamese wood is cheaper and has much lower transportation costs. Therefore, enterprises need to coordinate with the State to promote advertising and introducing models of wooden products made of Vietnamese wood to importing countries, heading to expand consumption markets.