In the final of the 49 kg category, Tuyen defeated Uzbek fighter Madinabonu Mannopova, runner-up at Asian Games 2019. The intense match ended with a close win 25-24 for Tuyen.

Since Tuyen was seeded first in the tournament, she didn’t have to participate in the first game. In the quarterfinals and semifinals, Tuyen beat opponents from Tajikistan and Taiwan to enter the final.

The Asian Taekwondo Championships took place in Lebanon from June 16 to 18. A total of 337 athletes from 28 countries and territories in the region participated in the event.

Tuyet went on to collect a silver at the championships.

On Saturday, the taekwondo team will travel to Kazakhstan to continue training. Expert Kim and Tuyen will fly to Tokyo on July 19 to compete in the Olympics.

Previously, to prepare for Olympic qualifiers and the Asian Taekwondo Championships, the national taekwondo team left for overseas training on April 14. For the past two months, the team have trained in Kazakhstan and Uzbekistan, before competing in Jordan and Lebanon. 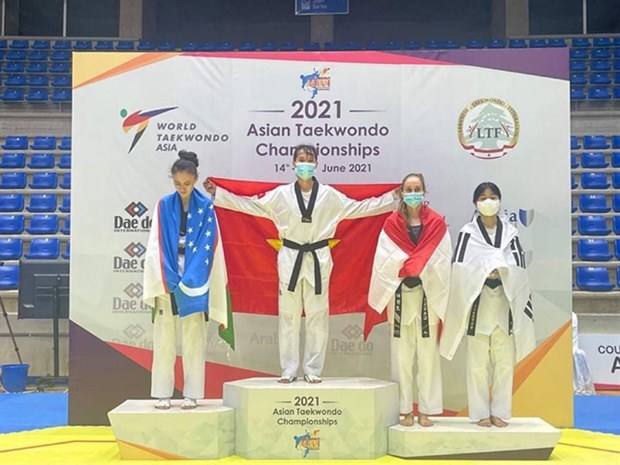 Truong Thi Kim Tuyen is on the top podium of the women’s 49kg discipline at the Asian Taekwondo Championship in Lebanon.(Photo: VNA)

Hanoi (VNS/VNA) – Vietnam won one gold and one silver medal at the Asian Taekwondo Championship which closed in Beirut, Lebanon, on June 17.

Truong Thi Kim Tuyen won gold in the women’s 49kg category. The No 1 seed defeated No 2  Mannopova  Madinabonu  of Uzbekistan 25-24 in the final.

It was Tuyen’s second Asian title in a row after her first in the 46kg class three year ago held in Vietnam. She is the first Vietnamese fighter to have won the continental competition. Madinabonu also took part in that event and grabbed a bronze.

Tuyen received a bye in the first round. She beat Munisa Oimatova of Tajikistan, No 9 seed, in the quarter-finals and No 5 Hung Yu-Ting of Chinese Taipei in the semi-finals. Hung and Tuyen will have a chance to fight again next month as both have qualified for the Olympics in Tokyo.

On June 16, Nguyen Thi Anh Tuyet pocketed a silver in the women’s 57kg class. The unseeded player shocked No 4 Laetitia Aoun of the hosts 12-0 in the quarter-finals before beating No 1 Chen Yu-Chuang of Chinese Taipei 5-4 in the last four. Chen previously knocked Tuyet out of an Olympic qualification tournament last month.

Tuyet however fell 28-11 to No 3 Kim Yu-jin of the Republic of Korea in the final.

Ho Thi Kim Ngan, who was seeded No 4 in the women’s 53kg pool, had an unsuccessful event as she was eliminated in the first round by Ghazal Soltani of Iran.

The Asian championship, which was on June 14-18, lured nearly 340 athletes from 28 countries and territories competing in 16 pools for both men and women.

Vietnamese players will fly to Kazakhstan to continue their training until July 10 when Tuyen and her coach Kim Ki-tae take part in the Tokyo Games./.