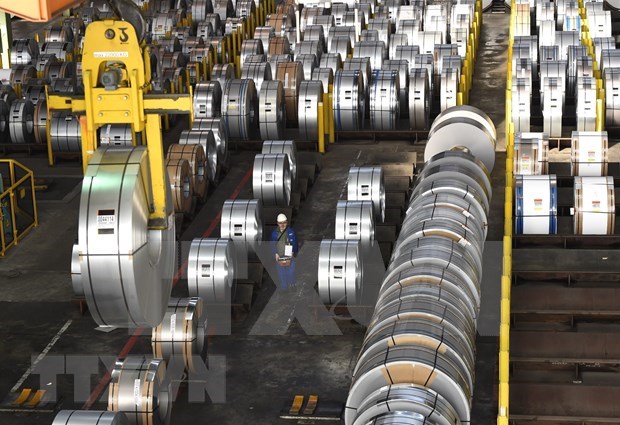 Hanoi (VNA) – Despite the complexity of the fourth COVID-19 wave , Vietnam’s GDP growth is forecast to exceed 6.5 percent this year on the back of surging industrial production and global economic recovery, according to Assoc. Prof. and PhD Dinh Trong Thinh, a senior economist from the Academy of Finance.

Given the economy is growing well in the first half of 2021, it is likely to expand over 7 percent in the remaining months, setting the scene for the country to achieve an overall GDP growth of at least 6.5 percent this year, Thinh told the Lao Dong (Labour) newspaper.

The coronavirus is gradually brought under control, he said, plus domestic production has been experiencing positive growth, with manufacturing and processing picking up at a current rate of 10 percent. The sector may rise by 17 – 18 percent during the final months of 2021, he added.

Thinh went on to say that the US, Chinese and EU economies are bouncing back, and increases in global credit demand will provide a good opportunity for Vietnam’s exports. The US’s economic growth remains positive at present and Vietnam’s shipments to the US is growing strong, he added.

A recent report by RongViet Securities Corporation (VDSC) forecast that the country’s GDP will grow by 7.2 percent in the second quarter of 2021 and 6.5 percent for the year as a whole.

Asian Development Bank (ADB) Country Director for Vietnam Andrew Jeffries said Vietnam is capable of achieving the twin goals of curbing the pandemic and sustaining economic growth this year. The country’s success in containing the virus has strengthened foreign investors’ confidence in its economy, he added.

It is important for Vietnam to boost growth and easy ways for small- and medium-sized enterprises (SMEs) to grow at the same time, thereby creating a solid foundation for a future private sector-led economy, Jeffries remarked.

According to the latest economic outlook report from Oxford Economics (OE), commissioned by the Institute of Chartered Accountants in England and Wales (ICAEW), despite the recent resurgence in COVID-19, Vietnam’s growth outlook remains optimistic and the economy is expected to return to pre-pandemic levels by the second half of 2021.

The country’s GDP is forecast to grow at 7.6 percent in 2021, among the highest rates in the region, the report said, noting that Vietnam was one of the few economies in the world to grow in 2020 due to its success in containing the pandemic.

“This early success enabled the economy to benefit from the surge in global trade activity and enjoy strong foreign direct investment flows that boosted export-oriented and manufacturing industries,” according to the report.

It said together with Singapore, Vietnam is expected to continue leading the region in recovery. “Despite a resurgence of COVID-19 cases in Vietnam, which has affected its manufacturing sector and export industries, its economy is predicted to rebound swiftly once restrictions are lifted,” the report read.

Economist Thinh emphasized that the most important thing at present is that Vietnam must give priority to giving COVID-19 vaccine to workers and preventing the virus from spreading inside companies and industrial parks.

Accelerating COVID-19 vaccine inoculation and keeping the coronavirus at bay remain key factors to sustain growth because with the COVID-19 resurging, declining incomes and economic conditions will have long-term impact on consumers’ spending behaviour and lifestyle, he said./. 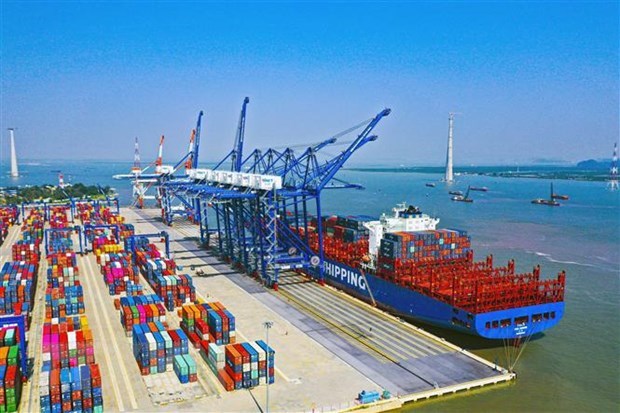 Hanoi (VNS/VNA) – Careful consideration is needed before increasing seaport services charges to limit negative impacts on the economy during the COVID-19 pandemic, according to the Vietnam Maritime Administration.

Responding to the Vietnam Ship Agents, Brokers and Maritime Service Providers Association (VISABA)’s proposal to raise container handling charges, the maritime administration said while the COVID-19 pandemic was still complex and hitting firms hard, the logistics costs must not cause any more burdens for import and export firms.

The Government also asked to keep service charges stable at this time.

VISABA recently proposed the minimum container loading and unloading charges at some ports in the northern region be increased by 10 percent annually for three consecutive years, starting from July 1, 2021.

For deep-water seaports, Lach Huyen and Cai Mep – Thi Vai, the increase was proposed to be at least 20 percent from July 1 and 10 percent for the next three years.

Nguyen Xuan Ky, general director of Tan Cang – Cai Mep International Terminal Company Limited, said seaports played an important role in the circulation of goods, adding it was necessary to increase services changes so enterprises could have resources for reinvestment.

According to the Vietnam Maritime Administration , foreign shipping lines collect a terminal handling charge of around 114-173 USD per container on their customers in Vietnam. However, Vietnam’s ports collect very low container handling charges, about 33 USD per 20ft-container at Dinh Vu, 52 USD at Cai Mep and 41 USD at HCM City.

The container loading and unloading charges of Vietnam remained low, only equivalent to 80 percent of Cambodia, 70 percent of Malaysia, 61 percent of Indonesia and 46 percent of Singapore.

Vietnam has attracted 40 foreign shipping lines with the transported cargo volume increasing by an average of 13 percent each year, helping promote the development of the logistics system and accelerate trade, according to the maritime administration.

The maritime administration said that Circular 54/2018/TT-BGTVT only regulated the minimum services charges and enterprises could charge higher fees than the minimum levels.

However, most seaports were applying the minimum fees under the circular to attract shipping lines./. 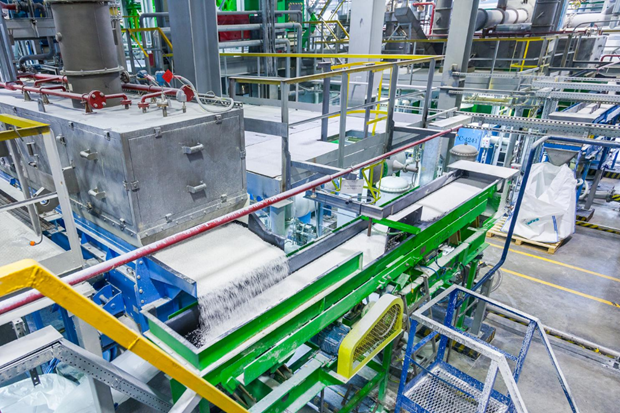 Binh Phuoc (VNA) – The Index of Industrial Production (IIP) in the southern province of Binh Phuoc increased 16.7 percent year-on-year in the first five months of 2021 , according to the provincial Department of Statistics.

Significant growth was seen in certain key industries , such as processing and manufacturing (17.9 percent), water supply and drainage, and waste treatment (4.5 percent), and the production and distribution of electricity, gas, and air conditioners (4.1 percent).

The department said the province’s budget collections totalled 5.84 trillion VND (over 252.7 million USD) in the period, up 14 percent year-on-year.

To implement the dual goal of COVID-19 containment and economic development, the provincial People’s Committee asked relevant departments, sectors, and localities to focus on promoting the development of innovative ecosystems and start-ups.

Binh Phuoc is seeking investment in a series of infrastructure projects, including an airport and industrial parks, in the 2020-2025 period.

Situated in the southern key economic region, Binh Phuoc is the largest of the 19 provinces in Vietnam’s southern region.

It is famous for two crops of high economic value – rubber and cashew nuts – and has 243,000ha of land under the former and 138,000ha under the latter.

It posted economic growth of 7.51 percent last year thanks to outstanding efforts in containing COVID-19 and promoting economic development.

On the same day, the Ministry of National Defense, the Ministry of Public Security and the governments of provinces and cities also received a similar dispatch from the ministry that called on them to accelerate the vaccination.

The ministry asked the National Institute of Hygiene and Epidemiology to quickly allocate doses of Covid-19 vaccine to the relevant agencies prior to June 18 so that the inoculation program runs smoothly.

The provinces and cities were told to deploy the vaccination program as soon as they take delivery of the Covid-19 vaccine doses and get it done before August 15 this year.

The task force will be in charge of treating Covid-19 patients, keeping a close watch on the development of Covid-19 as well as testing and quarantining suspected cases in HCMC.

As of June 14, the total number of doses of Covid-19 vaccine administered to people nationwide had reached over 1.49 million, with some 55,270 people getting two shots.

The Covid-19 epicenter of Bac Giang recorded the biggest number of new patients with 138 cases, followed by HCMC with 38 and Bac Ninh with 21. These are also the country’s three biggest Covid-19 hotspots at present.

Besides, Binh Duong had 12 new cases and Lang Son had one.

In addition to domestic infections, two imported cases were reported in Tay Ninh and one in Quang Nam. They were quarantined right after arriving in the country.

Vietnam has reported 7,997 domestic Covid-19 infections in the latest outbreak starting on April 27, while the Covid-19 tally since early last year has jumped to 11,212.

Up to now, 4,543 Covid-19 patients in the country have fully recovered, including 303 people discharged from the hospital today.

Among new Covid-19 cases detected in HCMC, five are workers at the city’s Hospital for Tropical Diseases, which is one of the frontline hospitals in the fight against Covid-19. The hospital has reported 60 Covid-19 cases since June 11.

So far, over 10,700 people living in the city have been injected with the Covid-19 vaccines, of whom 313 people have received two shots.

The municipal government has written to the prime minister proposing allowing companies in the city to acquire Covid-19 vaccines on their own to help the city swiftly realize its target of vaccinating 70% of its population against Covid-19 as soon as possible.

According to the HCMC Center for Disease Control, a quick response team of HCMC’s Cho Ray Hospital returned to the city from Bac Giang Province today. The Covid-19 outbreak is turning more complicated in the city, with many patients in critical conditions.

As the city is currently in urgent need of experienced doctors and nurses, the quick response team comprising 13 members was sent back to the city.

HCMC – Despite strong selling pressure, the sharp rise of property and securities stocks and several largecaps helped the VN-Index of the Hochiminh Stock Exchange move up and  extend its winning streak to the third consecutive session today, June 15.

The southern bourse saw over 730.9 million shares worth VND24.4 trillion change hands, down 6% in volume and 3% in value, against the previous session. Block deals contributed VND1.2 trillion to the total value.

Many property and construction stocks such as urban project developer KBC, industrial urban developer D2D and mining firm HCD shot up to their ceiling prices.

In the group of securities stocks, FTS stole the limelight as it hit its upper limit of 7%, while HCM and VCI jumped by over 4%.

Lender VPB became the biggest drag on the southern bourse as it plummeted 6.2% at the close, but took the lead by liquidity with a matching volume of 38 million shares.

On the Hanoi Stock Exchange, the poor performance of many large-cap stocks sent the HNX-Index down 0.72 points, or 0.22%, from the day earlier, at 318.29. Over 152 million shares worth VND4.1 trillion were traded at the close.

Lender SHB dipped by 4.1%, but was the most traded stock on the northern bourse with over 31 million shares changing hands.