Bangkok (VNA) – Thailand ‘s cross-border trade is expected to recover to growth of 3-6 percent this year, spurred by COVID-19 vaccine distribution and the global economic recovery.

According to Keerati Rushchano, Director-General of the Thai Foreign Trade Department, cross-border trade, which includes transit trade, is likely to generate 1.36-1.40 trillion baht (44.6-45.9 billion USD), up from 1.31 trillion baht in 2020.

Last year, overall border trade, including transit trade, declined 1.7 percent from the year before mainly because of the pandemic and the closed border checkpoints to curb the spread of the novel coronavirus, in addition to the strong baht.

Transit trade with southern China and Singapore went up by 20 percent and 17.2 percent, to value 238 billion baht and 88.7 billion baht, respectively. Transit trade value with Vietnam and other countries fell by 1.3 percent to 172 billion baht.

VNA
Hanoi (VNA) – The Philippines’ exports of garments and hard goods could reach 2 billion USD in 2021 as local garment factories expect to receive up to 500 million USD worth of new orders from global fashion brands.

President of the Foreign Buyers Association of the Philippines (FOBAP) Robert Young said the group has been getting export orders and inquiries for garments and apparel from foreign buyers, including Zeeman Europe, Walmart and TJ Maxx in the US, as well as Hudson’s in Canada.

Young estimates that the additional orders may create about 10,000 to 20,000 jobs in factories located in Metro Manila and Cebu.

To support export activities, he called on the government to ease the community quarantine level.

He also said that factories should have access to loans to allow them to open and operate./. 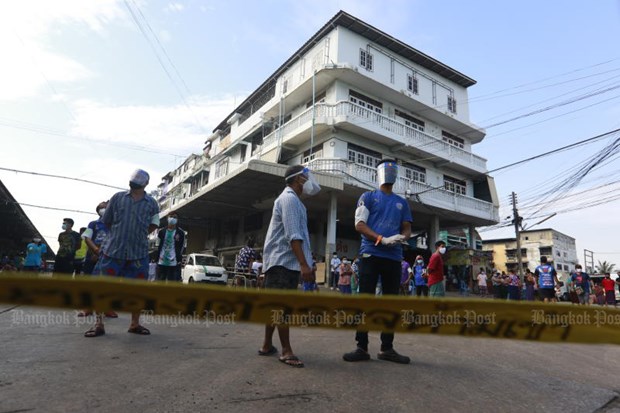 Samut Sakhon ‘s Central Shrimp Market, the epicentre of the second wave of COVID-19 in Thailand, reopens on March 1, after being closed 10 weeks ago. (Source: Bangkokpost)

Bangkok (VNA) – The Central Shrimp Market in Thailand’s coastal province of Samut Sakhon – the epicentre of the country’s second COVID-19 wave – reopened on March 1 after being closed since December 19.

The market was crowded with traders, buyers and migrant workers who must all strictly follow measures imposed to prevent the spread of the virus.

Trucks delivering seafood to the market, and the vehicles of sellers and buyers, must all go through screening points. The temperatures of all occupants are checked and they must show proof they have been tested for COVID-19 .

All migrant workers at all fish and shrimp piers must wear face masks and protective gear such as gloves, rubber boots and rubber aprons, in line with the standards set by the Public Health Ministry.

Traders and owners of fish and shrimp stalls all expressed their delight when the market had finally reopened after being closed for over 10 weeks.

The province’s accumulated COVID-19 cases during the third wave rose to 16,377, of whom seven have died.

On the same day, Thailand logged in 80 new COVID-19 infections, putting the national tally at 26,031, including 83 deaths.

Thailand kicked off its COVID-19 inoculation campaign a day prior, with cabinet ministers, health officials and medical professionals among the first in the queue to receive vaccinations.

The first doses of vaccine, developed by China’s Sinovac Biotech, were given to Deputy Prime Minister Anutin Charnvirakul, who is also the health minister, among others at an infectious diseases institute on the outskirts of Bangkok.

Prime Minister Prayuth Chan-ocha, 66, also attended the event, although his age falls outside the range of 18 to 59 suitable to receive Sinovac’s CoronaVac vaccine, so he did not get it.

Thailand received its first 200,000 doses of the Sinovac vaccine from China, which have been distributed to 13 high-risk provinces. It will receive another 1.8 million shots in March and April.

Thailand is expected to take delivery of 17,000 doses of AstraZeneca’s vaccine in the second week of March./.

Toyota Tsusho said last week that the trading arm of the Toyota Motor Corp . group is purchasing a 9.5 percent stake in ATP30 for 64.35 million baht (2 million USD) through its local unit, Toyota Tsusho Thai Holdings Co. The acquisition procedure is set to be completed in early March, a Toyota Tsusho official said.

The partnership will enable Toyota Tsusho to provide ATP30 with its mobility-related digital technologies to boost the safety and efficiency of commuter bus services, mainly for Japanese businesses operating in Thailand.

TT Techno-Park President Takayuki Tatsuta said that the first stage, already in practical use, sets the most efficient bus routes and is designed to help businesses cut commuting expenses by 10 to 20 percent.

The second stage, to be put in place late this year, aims to allocate buses according to the number of plant workers leaving after putting in overtime, Tatsuta said. He added enabling employees to book cyclic buses via smartphones is likely to become operational next year or later, making way for the final phase./.

The Hanoitimes – The investment promotion conference presents a big opportunity for both domestic and foreign enterprises doing business in Hanoi, said a local official.

At the upcoming “Hanoi 2020 – Investment and Development Cooperation” conference, the city’s leaders will issue licenses for 116 projects with registered capital of a combined VND339.67 trillion (US$14.66 billion), according to the municipal People’s Committee.

The event, scheduled to take place at the National Convention Center on June 27, is set to attract up to 1,850 delegates, including senior government officials, 29 ambassadors and diplomatic officers, representatives from eight international organizations, foreign experts, among others.

Over the past few years, Hanoi has been striving to improve the legal framework for greater convenience and addressing concerns of investors, Suu said at a press conference on June 23, stating the goal is for new projects to be implemented at the earliest time possible.

Notably, the conference would welcome over 1,200 domestic and foreign investors, businesses, many of whom would receive their respective investment licenses from Hanoi’s authorities. Prime Minister Nguyen Xuan Phuc would attend this meaningful event.

Additionally, Hanoi’s leaders are expected to sign 36 memorandum of understandings (MOUs) worth US$26.08 billion with organizations, businesses and investors, including 23 MOUs with domestic enterprises (US$17.85 billion) and 13 with foreign ones (US$8.22 billion).

“Hanoi 2020 – Investment and Development Cooperation” conference is expected to be a platform for greater cooperation between investors, businesses and Hanoi’s authorities in particular, and of Vietnam in general.

By convening the conference after the initial containment of the Covid-19 pandemic, Hanoi sends a strong message on efforts of the capital city and Vietnam to lure investment from domestic and overseas businesses, the deputy mayor said.

More than ever, Hanoi remains a safe and stable investment destination for investors as the capital city is determined to be the pioneer among Vietnam’s localities in rebooting the economy in the post-pandemic period, he added.

In 2020, Hanoi targets an economic expansion rate 1.3 times higher than the national average, and a state budget revenue of VND285 trillion (US$12.34 billion).

FDI commitments to Hanoi in the year to May 19 increased 6.1% against the previous month to US$1.04 billion. From the start of this year, the capital city has approved 255 new projects worth US$327 million and allowed other 63 to pump an additional US$378 million in the five-month period. Foreign investors also contributed US$340 million in capital to other 468 projects.

Shubhra made the comments during a teleconference on October 7 that was jointly hosted by the Vietnamese embassy in India and the Indian Importers Chambers of Commerce and Industry (IICCI).

She went on to highlight key Vietnamese agricultural products such as dragon fruit, coffee, cocoa, and cashew nuts which also have great potential to penetrate the Indian market.

According to the Indian official, there are currently 255 operational investment projects in Vietnam, showing Indian businesses’ keen interest in the Southeast Asian country’s investment environment.

Vietnam has been working towards an agricultural processing hub by 2030, a target which is expected to provide fresh impetus for stronger trade ties between the two sides, she stressed, adding that India is hopeful of becoming one of Vietnam’s leading trade partners like the US and China.

In response, Vietnamese Ambassador to India Pham Sanh Chau introduced participating delegates to a number of typical Vietnamese agricultural products such as coffee, tea, cocoa, cashew nuts, and coconut water, and proposed that India remove tariff and non-tariff barriers as well as simplify its administrative procedures, making it easier for their commodities to penetrate deep into each other’s markets.

The Vietnamese diplomat also urged the Indian side to open their market for a number of Vietnamese fruits such as longan, grapefruit, durian, and rambutan.

Ambassador Chau affirmed the teleconference has offered a great chance for both sides’ business communities to strengthen connectivity and seek reliable partners.

The embassy will continue to fully tap into all available resources and promote trade facilitation in order to remove difficulties for businesses from both sides, said Chau.