Attention should be paid to mobilizing and effectively using natural resources such as land, forests, sea, air and environment to serve national development, he said.

It is also necessary to make cultural tradition, history traditions and the tradition of solidarity and unity of the nation become development resources, he added.

Chinh directed the Ministry of Planning and Investment to consider internal resources a fundamental, long-term and decisive strategy, and external resources an important, essential, frequent and breakthrough factor.

He stressed the principle of “three don’ts” in addressing problems for localities, businesses and people: Don’t say “no”, Don’t say “difficult”, and Don’t say “yes” but then take no action.

An economic restructuring project for 2021-2025 and a national strategy on green growth for 2021-2030 will be developed as well in order to be submitted to the Government leader in May and June, respectively.

The ministers agreed that a normalized global tourism industry was “crucial” to the world’s economic recovery in the wake of the coronavirus pandemic, Italian Minister of Tourism Massimo Garavaglia told reporters after the day-long virtual meeting of ministers from the G20, which groups 19 countries and the European Union (EU).

The meeting agreed to back efforts for “safe mobility” that coordinates with regional and national initiatives, such as the EU-launched Digital Green Certificate, which shows a person has been fully vaccinated, has coronavirus immunity after recovering from an infection, or has recently tested negative for COVID-19, the disease caused by the coronavirus.

Garavaglia said European Commissioner Thierry Breton has committed to introducing the Green Certificate “as soon as possible.” The Italian minister said he estimated the certificates would be ready by mid-June.

“We need common, harmonized criteria for the easing of travel restrictions, and for increased investment in systems that support safe travel, including testing on departure and on arrival,” Pololikashvili said.

The G20 communique did not refer specifically to vaccine passports, but it did say ministers wanted to support and coordinate “safe international mobility initiatives.”

Italian Prime Minister Mario Draghi made a pitch during the meeting for visitors to return to Italy as tourism ramps up.

Though most participants in Tuesday’s meeting attended via video hookup, the event was officially held in Rome, Italy’s most popular tourist destination as the country holds the G20 rotating presidency this year.

Draghi said Italy would issue its own alternative to the EU’s Green Certificate by the middle of May in a bid to help jump-start the tourism sector that was responsible for 13 percent of Italy’s economic production before the pandemic.

“Let’s not wait until mid-June for the European Union’s pass,” Draghi said. “In mid-May, tourists can have the Italian pass. The time has come to book holidays in Italy.”

According to data from the World Travel and Tourism Council, global tourist arrivals dropped 73 percent in 2020 due to the pandemic, which led to the loss of nearly 62 million travel- and tourist-related jobs.

The communique said the health crisis had presented an “opportunity to rethink tourism” and reform it, so it can stand on a sustainable footing. 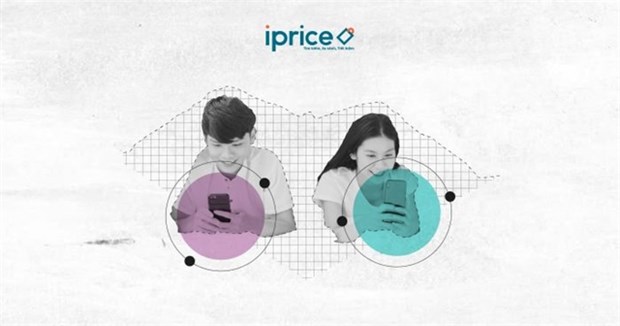 The percentage of women who buy electronic products online is nearly equal to that of men (Photo: iprice.vn)

Hanoi (VNS/VNA) — The percentage of women who buy electronic products online is nearly equal to that of men, according to an iPrice survey .

Meanwhile, the rate for men was 57 percent in Q1, down from 62 percent in the same period last year.

The report also showed that there is a change in the shopping age group of women. Specifically, the percentage of women aged 35-44 and 45-54 who purchased the items in this category online increased by 4 percent in the first three months of this year compared to the same period last year. In addition, the older age group from 55 to 64 also had a slight increase of 2 percent.

Meanwhile, the rate in the group of younger female consumers aged 25-34 saw a sharp decrease of 10 percent year-on-year.

Experts said this change might be due to the impact of the COVID-19 pandemic early last year when many people worked from home. Therefore, the proportion of consumers in general and office women in this age group, in particular, tended to purchase electronic products for working and living at home. 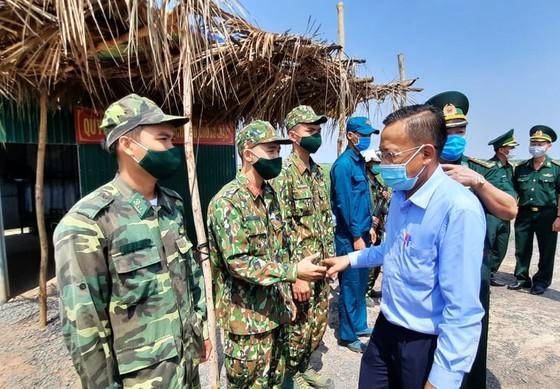 Head of HCMC Commission of Mass Mobilization Nguyen Huu Hiep visits border guards at the checkpoint No.12 in Chau Thanh District. (Photo: SGGP)
On behalf of the Party, Government and the People of HCMC, Mr. Nguyen Huu Hiep handed over more than VND2.5 billion (US$108,000), goods worth VND500 million (US$21,677), VND200 million (US$8,6700) worth of equipment for the installation of solar powered lighting systems at border gates to the border forces who are on duty at border crossings in Chau Thanh District in the fight against Covid-19.
Head of HCMC Commission of Mass Mobilization Nguyen Huu Hiep expressed his sincere thanks to the provincial government and armed forces for controlling the Covid-19 pandemic at the border gates and outstanding contribution to pandemic prevention.
Tay Ninh Province shares over 240 kilometer land border with Cambodia with a total 15 border stations, 14 checkpoints and 27 watching border crossings.
In these days, the High Command of the Border Guard in the province has established 129 monitoring points along the border line with more than 1,000 soldiers and officials to make all efforts to prevent illegal entry.
The delegation visited border guards at six Covid-19 monitoring and control stations to encourage soldiers to overcome difficulties and extreme weather challenges to maintain secure borders. 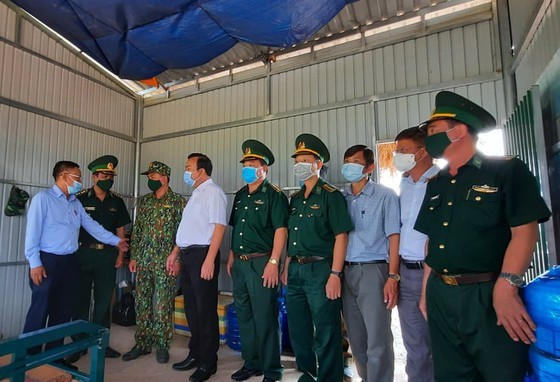 At the checkpoint No.12 in Chau Thanh District. (Photo: SGGP) 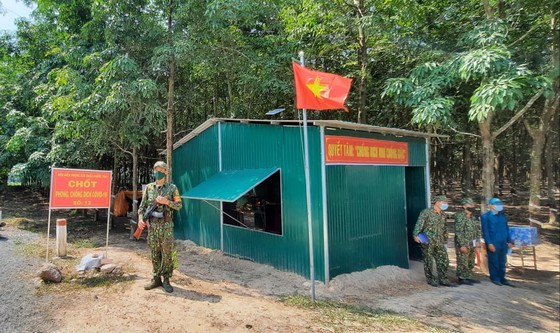 The delegation visits border guards at the checkpoint No.11

QR codes have gained particularly strong traction in APAC compared to the rest of the world. — Infographic Mastercard

As a result of the pandemic, 94 per cent of people in the Asia Pacific region (APAC) said they will consider using at least one emerging payment method, such as QR codes, digital or mobile wallets, installment plans, crypto currencies, biometrics and others, in the coming year.

These are the main findings from the Mastercard New Payments Index conducted across 18 markets globally, which reveals that 84 per cent of consumers in APAC already have access to more ways to pay compared to one year ago. Of note for entrepreneurs, 74 per cent of respondents said that they would shop at small businesses with greater frequency if they offered additional payment options.

“Consumers in Asia Pacific have already gained recognition globally for their openness to new technologies and innovation, and these findings confirm that this trend is only set to continue as more digital payment options rapidly become main stream in this part of the world.”

Looking ahead, the use of a range of payment technologies is trending upwards as people’s comfort with and understanding of them increases – while the use of cash steadily decreases. In fact, in the coming year, 69 per cent of respondents in APAC say they plan to use cash less frequently. Meanwhile, digital or mobile wallets have gained significant popularity amongst consumers in APAC, with 68 per cent of respondents anticipating using this type of payment in the next year, higher than the global average of 62 per cent.

“This behaviour shift is reinforced by people’s desire for choice – with 85 per cent of consumers in APAC saying that they expect to make purchases when they want and how they want. Businesses that can provide multiple ways to shop and pay will be best positioned to meet the unique needs of this moment that are shaping the future of commerce for years to come,” added Malhotra.

The survey also revealed that 84 per cent of consumers in APAC have seen their access to emerging forms of payments increase in the past year alone. QR codes have gained particularly strong traction in APAC compared to the rest of the world. Of those who used QR codes for payment, 63 per cent said they used them more frequently in the last year than they had in the past.

A recent study on 5,500 major Mastercard merchants showed that between Q1 2020 and Q1 2021, more than a fifth of these merchants globally increased the number of ways they connect with consumers, either by enabling an e-commerce channel or accepting contactless transactions. Mastercard also saw the total number of card-not-present transactions grow by over 30 percent globally while more than 100 markets saw contactless as a share of total in-person transactions grow by at least 50 per cent. — VNS

Bonds issuance on the international market not only help firms diversify their capital mobilization channels, but also expand markets and further attract investment.

The firm’s bonds, given a B2 rating by Moody’s and B by Fitch, were issued with a maturity period of five year and an interest rate of 7.375% per year, with Credit Suisse, UBS and Standard Chartered Bank involving in arranging the deal.

“I hope our success would open up the door for more Vietnamese enterprises turning to this channel for fund raising,” Huy said.

Among those showing interests for BIM Land’s bond, 58% came from Asia, 41% from Europe, Middle East and Africa, and the rest from US, of which 92% were investment and asset management funds, and 8% were private banks.

BIM Land plans to use proceeds from this issuance for its real estate projects, including those of green and environmentally-friendly.

Before BIM Land, a number of local public firms successfully issued bonds on international markets, including Vingroup (HOSE:VIC) with bonds worth US$200 million for fixed rate of 11.625% per year in 2013; Novaland (HOSE:NVL) issuing convertible bond of US$240 million in 2018; and VPBank (HOSE: VPB) in 2019 with bonds worth US$300 million.

According to experts, bonds issuance on the international market not only help firms diversify their capital mobilization channels, but also to expand markets and further attract investment.