A poor mother in the northern central province of Thanh Hoa is seeking community support for her two children who are suffering Thalassemia.

Vi Thi Toan in Xuan Hung Village, Nhu Thanh District is taking care of her two children who both have been living with Thalassemia for many years. The daughter is now 20 years old, while the son is 11 years old. Toan and her children

She even considered suicide. Particularly, at that time, her second child was just a toddler.

Since then, she and her husband have been trying to do different kinds of work to cover the treatment fees for their children. Besides farming work, Toan also works as a porter to earn money. However, she can only work for half of the day to spend the remaining time taking care of her children.

According to Nguyen Van Hung, chairman of Xuan Khang Commune, Toan’s family is very poor. He hoped that donors could join hands to assist them.

Chu Xuan Dung, deputy chairman of the municipal People’s Committee, said Tuesday residents should refrain from gathering in public spaces, and keep maintaining a distance of at least a meter from each other.

He said they should not exercise or play sports as a group in parks, gardens and other public spaces.

Any celebrations and other gatherings must strictly follow all coronavirus prevention measures, including the submitting of medical declarations and wearing masks, he added.

Dung’s announcement was made as part of the capital city’s response to the nationwide Covid-19 outbreak since last week that has so far seen 38 community transmissions recorded in seven localities: Ha Nam, Vinh Phuc, Hanoi, Hung Yen, Da Nang, Yen Bai and HCMC.

Hanoi so far has recorded four community cases and locked down several locations including the National Hospital for Tropical Diseases, its frontline hospital in the Covid-19 fight. The capital city has also suspended many non-essential services including theaters, massage parlors, gyms and outdoor food vendors and cafes.

The city currently has over 2,400 people under centralized quarantine.

They had fought off stiff competition from the country’s 71 students with 37 topics in a competition held in Lam Dong.

The annual event, the world’s largest pre-college science competition, draws the participation of more than 1,600 students from 59 countries, regions and territories with 1,200 scientific topics.

Many prizes, worth of more than USD 4 million, will be given to winners.

The decision has been made after several individuals contracted the virus after they’d already completed the 14-day quarantine and tested negative twice or thrice.

In the past week, at least three such cases have been detected.

The latest decision is the second reversal in as many days. The ministry had said a day earlier that those in centralized quarantine facilities would not be allowed to go home after completing the mandated 14-day quarantine and testing negative twice during the period. It had not specified the new duration.

Then, it reversed the decision earlier today, saying the original 14-day quarantine period will remain with strengthened post-quarantine monitoring and restrictions.

Minister Long has urged concerned facilities to impose quarantine procedures strictly to prevent contagion. A person who has completed the 21-day quarantine needs to be supervised for the next seven days at home, he said.

He also asked localities to find and conduct random tests for foreigners who have entered Vietnam recently, as well as employees of bars, karaoke and massage parlors.

Vietnam has confirmed 38 new local Covid-19 cases since April 27 in the latest outbreak, the northern provinces of Ha Nam and Vinh Phuc leading with 14 cases each, followed by Hanoi with four. 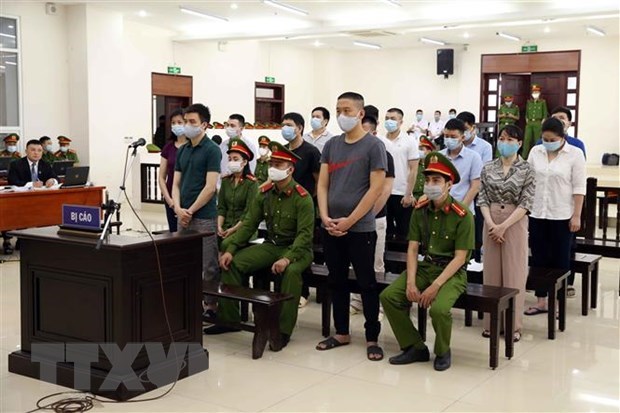 Defendants at the court (Photo: VNA)

Hanoi (VNA) – The People’s Court of Hanoi on May 5 opened a first-instance trial of a case related to smuggling and violations of accounting regulations which occurred at the Nhat Cuong Technic Co Ltd.

This is one of the five major cases which the Central Steering Committee for Corruption Prevention and Control has required to be tried as early as possible.

At the opening session on May 5, the trial jury announced a decision to cancel the trial against Mai Tien Dung, 38, head of Nhat Cuong Company ’s used mobile business line, who died due to fatal illness.

Among 14 defendants put on trial, there are three women. All of the defendants have been held in custody.

The 12 other defendants, along with Ngoc, are prosecuted for smuggling .

Regarding the charge of smuggling, the indictment said from January 2014 to May 2019, Bui Quang Huy, Nhat Cuong General Director, personally directed the company’s staff to conduct 2,502 illegal transactions involving the purchase and sale of more than 255,000 mobile phones and electronic equipment worth over 2.92 trillion VND in total (126.7 million USD) with 16 suppliers in Hong Kong (China).

Huy then contacted and hired smuggling rings to transport the products from Hong Kong to Vietnam and hand over to the Nhat Cuong Company for selling, with a total of 52,811 products sold at a total value of 307 billion VND.

As for the violations of accounting regulations that cause serious consequences, the indictment said in 2014, Huy instructed the firm’s employees to set up two different accounting systems, one for internal use and another fake one for public reporting.

The procuracy said that this is a banned act under Article 13 of the law on accounting, which caused a loss of nearly 30 billion VND in tax revenue for the State.

Huy and several other defendants are on the run and have been put on the wanted list by police.

The trial is expected to last one week./.