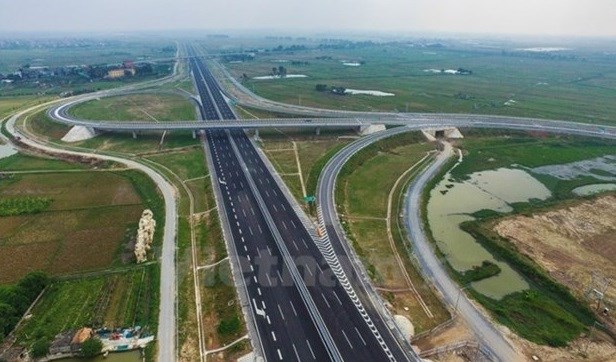 Hanoi (VNA) – Only 7.5 percent of official development assistance ( ODA ) and foreign loans have been disbursed since the beginning of the year according to the Ministry of Finance (MoF).

This rate is too low, Deputy Minister Tran Xuan Ha told a June 11 meeting between ministries and sectors on disbursement.

He proposed that ministries, sectors, and project owners adopt more drastic measures to complete their tasks.

Truong Hung Long, director of the ministry’s Debt Management and External Finance Department, cited data from ministries and sectors in saying that, as of June 10, only 1.25 trillion VND (54.6 million USD) worth of ODA and foreign loans had been disbursed, equivalent to 7.53 percent of the assigned estimate.

Only five out of 13 ministries and sectors have disbursed public investment from ODA and foreign loans this year.

The MoF said the partial completion of investment procedures for investment projects has resulted in slow disbursement, together with the COVID-19 pandemic.

To fulfil disbursement plans, Long stressed the need for synchronous and drastic measures in the entire political system, the Government, ministries, sectors, and localities.

It is necessary to review the detailed allocation of estimated capital to each project, ensure the progress and disbursement needs of each project, remove obstacles and difficulties in project implementation and disbursement, and speed up disbursement for potential projects and those that have completed investment procedures, bidding, and contract approval.

The MoF also suggested that the Ministry of Planning and Investment coordinate with relevant agencies in reviewing and evaluating public disbursement in the past, clearly identifying any difficulties and obstacles and proposing solutions to address them./.

The loan is mentioned in the HCMC Budget Development Policy Support Program (DPO-2), which has just been approved by the municipal People’s Committee.

Days payable outstanding (DPO) is a form of WB support that helps borrowers “achieve sustainable results through the process of policy and institutional reforms.”

The loan is expected to help the city fund infrastructure constructions and improve its management capabilities.

As currently envisaged, the entire disbursement amount from the program will be transferred to the city budget and spent on development projects under the public investment plan for the 2016-2020 period that have transitioned for implementation to the next five years.

Some of projects expected to benefit from the program include: building new general hospitals in Thu Duc City and districts of Cu Chi and Hoc Mon; a drainage system on Vo Van Ngan Street in Thu Duc; renovation of the Dam Sen canal; construction of embankments and tidal sluice gates on Cau Sap canal in District 8; and improving the drainage system on Ly Chieu Hoang Street in District 6.

The DPO-2 program will have a duration of three years, from the date the agreement between HCMC and WB is signed. Its financial mechanism would have the municipal administration re-borrow the capital on terms contained in the Financing Agreement for the DPO-2 program between the Ministry of Finance and the World Bank. The city will make its own arrangements to repay the debt on time.

According to the municipal administration, Prime Minister Pham Minh Chinh has allocated more than VND42.2 trillion ($1.83 billion) from the state budget for the city this year. Of this, official development assistance (ODA) would be VND14.8 trillion and the city budget would disburse nearly VND27.4 trillion from its own budget.

Meanwhile, the demand for capital of agencies this year is more than VND47.8 trillion ($2 billion), leading to an imbalance in capital allocation and a shortfall of VND20.4 trillion.

It is in this context that the HCMC administration believes that disbursement of capital from the DPO-2 Program in 2021 will help the city balance its budget for investing in development.

In the precursor programme, DPO-1, the finance ministry disbursed to the city in April 2020 a sum of VND2.86 trillion (around $124 million) arranged for 153 projects. As of January this year, more than 96 percent of the funds had been disbursed. 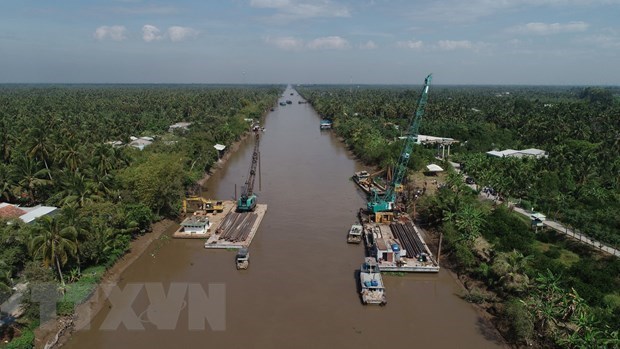 Hanoi (VNA) – The disbursement of official development assistance (ODA) at the Ministry of Agriculture and Rural Development (MARD) this year was estimated at 718.3 billion VND (31.33 million USD) as of May 31, or 25.2 percent of the target.

The ministry has attempted to remove bottlenecks in each project and speed up the process.

Some projects have seen adjustments to policies and loan agreements resulting in implementation and capital disbursement, in particular Sustainable Agricultural Transformation (VnSAT) and the Forest Sector Modernisation and Coastal Resilience Enhancement Project (FMCR).

The ravages of COVID-19 have also been an obstacle to the importation of machinery and equipment and the hiring of foreign consultants and contractors.

Most forestry projects require large amounts of time for training stakeholders, according to acting head of the Management Board for Forestry Projects Do Quang Tung.

Forestation is also hampered by COVID-19, he noted.

To speed up disbursement in ODA projects, MARD has asked relevant agencies to report to the Prime Minister on reciprocal capital replacing foreign capital for value-added tax payments.

Close to 2.85 trillion VND in foreign capital has been allocated to MARD in 2021, which has been distributed to 16 of its projects since the end of last year./. 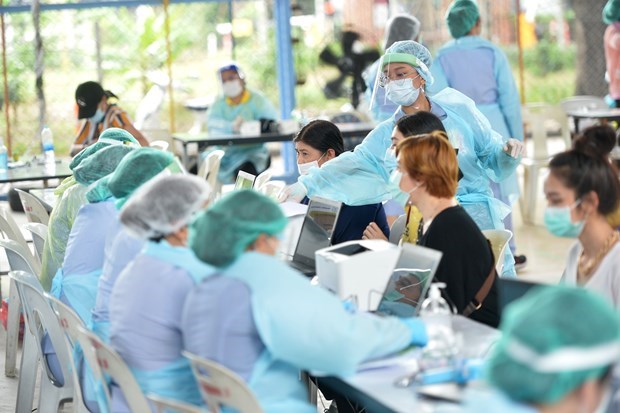 Over the previous 24 hours, there were 1,896 infections detected in the general public and 1,498 in prisons.

Since the third COVID-19 wave started at the beginning of April, there have been 88,086 cases in the Southeast Asian country.

The Thai cabinet has approved the draft of an executive decree authorising the government to borrow an additional 700 billion THB (22.25 billion USD) to revitalise the economy battered by the latest wave of COVID-19 infections, Bangkok Post quoted a government source as saying.

The draft was tabled at a cabinet meeting on May 18, chaired by Prime Minister Prayut Chan-o-cha.

The decree will authorise the government to borrow the money to rehabilitate the virus-hit economy as well as fund schemes to help people and entrepreneurs affected by the third wave of the pandemic which has been more severe than the two previous rounds, the source said.

Of the 700-billion-THB loan, about 30 billion THB will be earmarked for the procurement of medical supplies, vaccine shots, research and the renovation of hospitals, it added.

With the new loan, public debt, at the end of September, is estimated at 9.38 trillion THB or 58.6 percent of the GDP which is close to the fiscal sustainability framework ceiling of 60 percent.

The reason for issuing the new loan decree is because the government has almost used up the 1-trillion-THB loan under the decree issued last year to ease the economic impact during the first wave of COVID-19, according to the source.

On May 11, the cabinet approved the disbursement of about 834 billion THB under the 1-trillion-THB loan decree, with 166 billion THB remaining./.

Hanoi has been implementing a number of measures since the beginning of the year to speed up disbursement of public investment funds, including ODA sources, said a Hanoi leader.

As of end-June, the Hanoi city government has disbursed VND1.55 trillion (US$66.35 million) worth of official development assistance (ODA) loans, meeting 29.7% of the year’s target, according to the city’s deputy mayor Nguyen Doan Toan.

In May, Hanoi adjusted the investment plan and revised the capital expenditure target to VND44.91 trillion (US$1.92 billion). Of the amount, the city disbursed VND8.12 trillion (US$347.52 million) in the first five months, or 18.1% of the total.

To speed up disbursement of public investment funds, including ODA, Hanoi has been implementing a number of measures since the beginning of the year, including a review of the existing legislation, specifying responsibilities of local agencies, among others, Toan said.

Toan, however, points out some difficulties in implementing a number of ODA-funded projects, such as the Nam Thang Long–Tran Hung Dao section of urban railway line No.2, which requires additional capital, and the unfinished planning of underground station C9 near Hoan Kiem Lake.

Additionally, the Nhon – Hanoi Station section of this urban railway project faces obstacle in advanced payment procedures for package No.9, Toan said, attributing the issue to the ongoing negotiations on an additional loan of EUR20 million (US$22.44 million) from the French government.

Hanoi’s Party chief Vuong Dinh Hue suggested that the city should set up a tasks force with the aim of speeding up the disbursement progress, and each process must be tied to individuals’ responsibility. 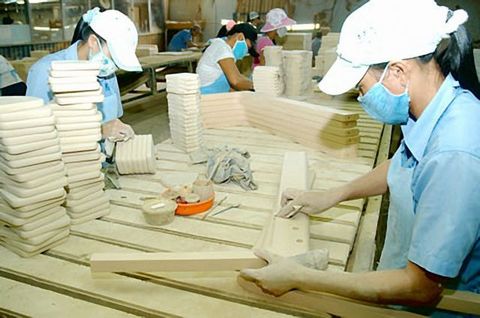 The SMEs can take loans via five entrusted banks by the Small and Medium Enterprises Development Fund (SMEDF). — Photo chinhphu.vn

The Ministry of Planning and Investment’s Small and Medium Enterprises Development Fund (SMEDF) expects to deploy direct lending for small and medium sized enterprises (SMEs) from this year.

This will help SMEs access the Government’s preferential capital through many different forms, according to the ministry.

At present, this fund has often provided loans through the entrusted banks and financial supports for SMEs.

The SMEs enjoying those loans including start-ups, and enterprises in industrial clusters and value chains will take loans via five entrusted banks by the fund.

With the duties of receiving, managing and using financial sources, domestic and foreign entrusted capital to create capital to support the development of SMEs, the fund has more capital for SMEs.

According to the Ministry of Planning and Investment, early this month, the SMEDF had a meeting with those banks to evaluate the implementation of indirect lending in 2020. They have also set this year’s disbursement target for loans providing for eligible SMEs.

The fund has also organised activities to improve operation ability of SMEs, such as seminars, training, consultancy and investment promotion.

Up to now, the capital from the SMEDF’s lending programme has been used effectively. The enterprises with the loans are operating well with many production and business expansion projects being implemented as planned, so the enterprises have repaid principal and interest. — VNS