Hanoi said it slams all acts that infringe upon its sovereignty rights on the islands.

Vietnam has reiterated the sovereignty over Truong Sa (Spratly) archipelago and slammed all violations.

Vietnamese Spokesperson Le Thi Thu Hang of the Ministry of Foreign Affairs made the statement when commenting on the visit to Thitu Island in Truong Sa by the Philippine military chief.

Hang said at the press conference on Thursday [June 10] that Vietnam strongly opposes all activities that infringe its sovereignty and jurisdiction on the islands.

The Armed Forces of the Philippines (AFP) on Wednesday reported that its Chief Cirilito Sobejana visited Thitu (called Pagasa by the Philippines) on Monday to proceed with the building plans for future patrols and logistics. In 2020, Manila spent PHP1.3 billion (US$27 million) to upgrade structures on the island, including runways.

With an area of 37.2 hectares, Thitu is the second largest of Vietnam’s Truong Sa archipelago. It is simultaneously claimed by Vietnam, the Philippines and China.

The Vietnamese spokesperson said Vietnam requests that relevant parties respect Vietnam’s sovereignty and international law, abide by the Declaration on the Conduct of Parties in the East Sea (DOC) and the United Nations Convention for the Law of the Sea (UNCLOS), without taking actions that complicate the situation.

She noted that all parties should positively contribute to the maintenance of peace and stability in the East Sea (South China Sea), as well as create conducive environments for negotiations for a Code of Conduct on the South China Sea (COC).

In response to the China Coast Guard’s presence on Triton Island in Vietnam’s Hoang Sa archipelago, Hang said Vietnamese authorities have closely monitored all activities in Hoang Sa and Truong Sa archipelagoes, as well as Vietnam’s waters in the East Sea.

“As repeatedly affirmed, Vietnam has sufficient historical evidence and legal basis to assert its sovereignty over the Hoang Sa (Paracel) and Truong Sa (Spratly) islands in accordance with international law,” she noted.

China seized Paracel Islands from Vietnam in bloody battles in 1974.

Regarding the news on China’s support of Cambodia’s Ream naval base, Hang said Vietnam attaches importance to the traditional friendship with both China and Cambodia and hopes the two countries actively contribute to the peace, security, stability, and prosperity in the region and the world.

while detailing Vietnam’s viewpoints on several issues related to the East Sea at the ministry’s regular press conference on April 29.

Replying to a question about the report that the Chinese coast guard force declared it will guarantee the enforcement of the fishing ban that will take effect on May 1, 2021, on the sea area covering part of the Gulf of Tonkin and Vietnam’s Hoang Sa (Paracel) archipelago, the deputy spokesman reiterated that Vietnam has sufficient legal ground and historical evidence testifying to its sovereignty over Hoang Sa and Truong Sa (Spratly) archipelagos, as well as its legal rights towards sea areas identified in line with the 1982 United Nations Convention on the Law of the Sea (UNCLOS).

Vietnam holds that measures to preserve creature resources need to be implemented in conformity with regulations of the 1982 UNCLOS and must not harm the sovereign right and jurisdiction at sea of other related states, according to Viet.

He stressed that Vietnam objects to and resolutely rejects this unilateral decision by the Chinese side, which has violated Vietnam’s sovereignty over Hoang Sa archipelago; infringed international law, including the 1982 UNCLOS; run counter to the spirit and wording of the Declaration on the Conduct of Parties in the East Sea (DOC); and gone against the agreement on basic principles guiding the settlement of sea-related issues between Vietnam and China.

Regarding the information that the Vietnamese maritime militia force operating near Hainan archipelago and Vietnam’s Hoang Sa and Truong Sa archipelagos has threatened the maritime law enforcement and security – defence forces of China, the deputy spokesman noted: “We refutes those incorrect information about the marine self-defence militia force of Vietnam.”

He again declared that any act harming Vietnam’s sovereignty over Hoang Sa and Truong Sa archipelagos, as well as the country’s sovereignty, sovereign right, and jurisdiction over its sea areas is valueless and not recognised, and Vietnam resolutely objects to such acts./.VNA

More than four decades after national reunification, the Truong Sa (Spratly) archipelago has been changing day-by-day.

Those who have helped beautify the islands and islets are also those who firmly defend Vietnam’s sovereignty over them.

Truong Sa archipelago consists of 21 islands and islets and is home to 33 navy units. Recognising the importance of the archipelago and the DK1 rigs on the southern continental shelf, over the years the Party, State, and people have joined hands to make them stronger. In addition to military units, Truong Sa now boasts schools, medical stations, cultural houses, memorials, pagodas, and green spaces.

Amid an ocean of difficulties and despite being far from the mainland, navy sailors continue to safeguard Vietnam’s sacred national sovereignty over seas and islands so that Truong Sa is forever a place for Vietnamese fishermen, helping to maintain peace for all./.VNA

Vietnam requests parties concerned to respect its sovereignty and international law and abide by the Declaration on the Conduct of Parties in the East Sea and the UNCLOS, Foreign Ministry’s spokeswoman Le Thi Thu Hang said.

She made the statement during the ministry’s regular press conference in Hanoi on May 27, in response to media questions about Vietnam’s stance on the Philippines’ preparations for the repair and upgrade of runway and infrastructure on Thi Tu (Thitu) Island in Vietnam’s Truong Sa (Spratly) archipelago.

Hang affirmed that Vietnam has sufficient legal basis and historical evidence to affirm its sovereignty over Truong Sa in accordance with international law. Every act violating Vietnam’s sovereignty and related rights on Truong Sa is illegal and valueless.

She also said Vietnam urges parties concerned to refrain from actions that could complicate the situation, and to make practical and active contributions to maintaining peace and stability in the East Sea and create an environment conducive to negotiations on a Code of Conduct in the East Sea (COC).

Maintaining peace, stability, order, security, and safety and freedom of navigation and overflight, abiding by law, and respecting the sovereignty and sovereign and jurisdictional rights of countries in the East Sea is the goal, interest, responsibility and common aspiration of all countries and the international community, she said, adding that Vietnam wishes that parties would strive to make responsible contributions to the issue./. VNA

Responding to questions related to the situation on the East Sea, the spokesperson said Vietnamese agencies always keep a close watch over all activities in the Hoang Sa (Paracel) and Truong Sa archipelagos as well as on Vietnamese waters in the East Sea.

Regarding reports that several Chinese vessels appeared near Tri Ton island in Vietnam’s Truong Sa archipelago, Hang reiterated that Vietnam has sufficient historical evidence and legal grounds to testify to its sovereignty over Hoang Sa and Truong Sa in accordance with international law.

As a member of the 1982 UN Convention on the Law of the Sea (UNCLOS 1982), Vietnam has sovereignty, sovereign rights and jurisdiction over related waters in the East Sea as defined in line with the Convention, she said.

Commenting on a report that the chief of staff of the Philippine armed forces made a trip to Thi Tu island in Vietnam’s Truong Sa and affirmed the Philippines’ plan to convert the island into its logistics hub, the spokesperson stressed that Vietnam resolutely objects to all violations of its sovereignty and related rights over the Truong Sa archipelago.

“Vietnam requests that all concerned parties respect Vietnam’s sovereignty and international law as well as the Declaration on the Conduct of Parties in the East Sea (DOC) and take no actions to complicate the situation while making practical and positive contributions to the maintenance of peace on the East Sea as well as creating favorable conditions for the negotiation on a Code of Conduct on the sea (COC),” spokesperson Hang said./. VNA 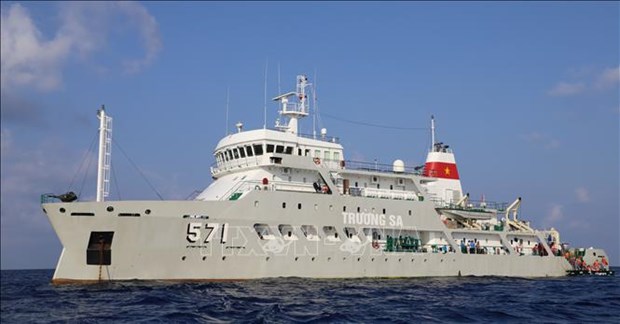 Hanoi (VNA) – Officers and soldiers of Brigade 955 are loyal to the Party, the homeland, and the people and are dedicated to firmly safeguarding sovereignty over the Truong Sa ( Spratly ) archipelago, contributing to ensuring Vietnam’s sovereignty over its seas, islands, and continental shelf regardless of circumstances. Brigade 955 is assigned the key task of delivering aid to, conducting search and rescue efforts around, and transporting guests of the Party, State, army and navy to islands in Truong Sa , which belongs to the central coastal province of Khanh Hoa; protecting the exploration and exploitation of oil and gas; and patrolling, managing, and protecting waters in the Cam Ranh military base. 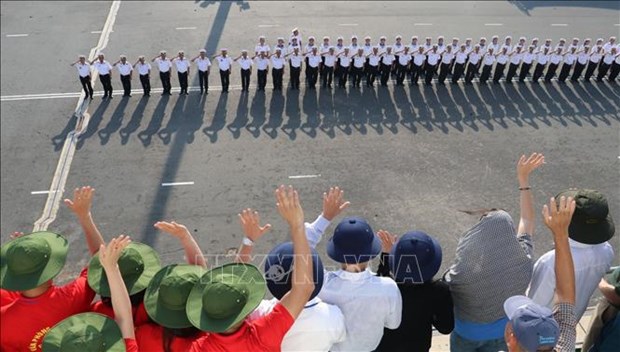