Many offers to sell coastal hotels in Da Nang have appeared on real estate forums these days. Most of them are located in districts Son Tra and Ngu Hanh Son. 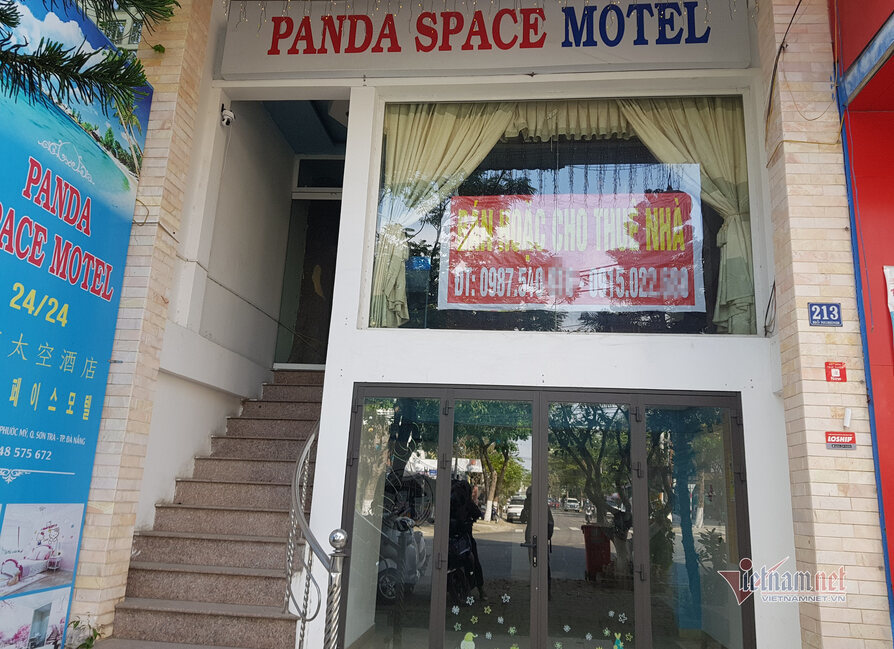 A hotel put up on sale

On just one real estate website on February 22 many ads were listed.

Hotels on the major streets of Ha Bong, Tran Bach Dang, Ho Nghinh, Vo Nguyen Giap and Ho Xuan Huong are offered at tens or hundreds of billions of dong.

Hoang Lam, the owner of a hotel on Tran Bach Dang street, said accommodation service providers have been hit hard by Covid-19.

“We have been struggling to survive by cutting costs. However, as capital is getting exhausted, hotel owners have to liquidate assets to pay bank debts,” he said.

“Selling hotels is unavoidable as there is no source of revenue, and the operation cost is high,” he said.

Do Van Hien from Dana Hotel, a broker, said a lot of hotels in Da Nang have been put up for sale since the second Covid-19 outbreak.

“The hotels for sale are 2-4-star. The prices have fallen by 20 percent and buyers are mostly from northern provinces,” Hien said.

According to Hien, 3-star hotels are priced at VND20-100 billion, while 4-star hotels are at least VND280 billion. The value of hotels depends on the locations, area, quality, numbers of rooms and brands.

The transactions of 4-5-star hotels, which have strong brands, are confidential. Hotel owners only work with prestigious brokers, and buyers have to prove their financial capability.

Hien said no one wanted to sell hotels in 2016-2019 because they could make a high profit from the business. But since 2020, guests are coming in dribs and drabs, and operation costs and loan interest rates are high.

Cao Tri Dung, chair of the Da Nang Tourism Association, admitted that tourism services have become nearly frozen and many hotels have been put up on sale.

“The pandemic resurgence before Tet blocked sources of guests. Ninety percent of clients cancelled or postponed plans to come to Da Nang,” he said.

He said this is common in a market economy, and that it is time to restructure the accommodation segment.

According to Da Nang People’s Committee, the total number of guests staying at accommodation facilities in the city in January 2021 was 251,094, a 65.6 percent decrease compared with the same period last year.

Nghiem Xuan Thanh, chairman of Vietcombank – a top performer in Vietnam’s banking sector – said that the bank has set forth a pre-tax profit target of VND25.2 trillion ($1.1 billion), signifying a 12 per cent jump compared to 2020.

The bank also aims to achieve a 6 per cent hike in its total asset value, an 8 per cent jump in total deposit value from the community and businesses, and 12 per cent credit expansion this year, while controlling its non-performing loan (NPL) ratio below 1 per cent.

This year, Military Bank (MB) has set forth fairly challenging business targets, with a 25-30 per cent jump in its pre-tax profit target to surpass VND14.6 trillion ($634.8 million).

Similarly, its total asset value is expected to grow 15 per cent to VND545 trillion ($23.7 billion), ensuring the performance of the credit expansion target assigned by the central bank, while keeping the consolidated NPL ratio below 1.3 per cent.

In case of VietinBank – one of the four leading state-owned lenders – this year the bank will target a 10-20 per cent jump in its profit target, along with a 3-6 per cent hike in total asset value, with credit sources expanding by 8-11 per cent and deposit volume growing at 10-12 per cent, while NPL ratio will be kept below 2 per cent.

Meanwhile, CEO Le Viet Hai at Ho Chi Minh City-based commercial lender ABBank said that 2021 is the first year of the bank’s mid-term business plan to 2025 with the target of carving out a spot among the most efficient privately-held banks in the country.

Do Minh Toan, CEO of ACB – another privately-held lender in Ho Chi Minh City – revealed that the bank’s targets this year are higher or at least equal to those in 2020 and these targets could be officially deployed after getting approval at the bank’s annual shareholders’ meeting in April.

VNDirect Securities JSC forecast an increase in the banks’ profit target this year. The banking sector is the main channel used by the government to propel economic growth.

VNDirect expects that the speed of public investment disbursement is kept at a high level and the central bank maintains loosening monetary policy this year to push up economic rebound and credit growth.

Economic and financial analysts, however, supposed the NPL volume would go up remarkably along with a rising number of firms subject to debt rescheduling according to the State Bank of Vietnam’s Circular No.01/2020/TT-NHNN. This forced banks to scale up provisioning late last year.

“Patient 2424” is a 24-year-old woman from Thoi Lai District, Can Tho City, who entered Vietnam illegally through the border at Hong Ngu District, Dong Thap Province on February 23 and was quarantined soon after. Her test results returned positive for the novel coronavirus on February 25.

The total number of cavers, however, was down 50 percent from the previous year to 7,000 as inbound tourism plunged due to travel restrictions.

Of the 7,000 visitors, 1,000 were foreign cavers who had entered Vietnam prior to the government halting international flights in late March last year to curb the spread of the coronavirus.

Nguyen Chau A, CEO of Oxalis, said the company, with about 500 employees, focuses exclusively on adventure tours to explore caves in Quang Binh, including Son Doong, the world’s largest cave, and Tu Lan.

With international flights and foreigner entry remaining suspended except for special cases , local businesses are focusing on boosting domestic tourism.

Currently, around 185 slots remain available to tour Son Doong in 2021, and 287 Tu Lan tours are up for grabs, according to Oxalis.

Tu Lan, a popular setting for film shoots, was discovered in 2010, with two entrances stretching 2.2 kilometers. Tourists usually explore Tu Lan along with other caves in the system, including Chuot, Hung Ton, Ken, and Kim.

To ensure safety, the company does not receive visitors from pandemic-hit areas as recommended by the Ministry of Health. Cavers joining the tour are required to submit medical declarations.

Vietnam has recorded 831 Covid-19 community transmission cases in 13 localities, including Hanoi and Ho Chi Minh City, since Jan. 28 when its latest outbreak began after a 55-day clean streak.

Coteccons Construction Joint Stock Company and the Bank for Investment and Development of Vietnam have already registered to purchase tens of thousands of doses which would be distributed among their employees and family members, according to a reports thanhnien.vn.

Dat Xanh Group, a real estate developer, has also announced plans to fund inoculations for over 7,300 employees working at 68 of its affiliates nationwide.

Furthermore, Phu Nhuan Jewelry, one of the country’s leading gold and gem stone firms, has agreed to purchase COVID-19 vaccines for staff members. It has also raised a total of VND270 million in support of the free vaccination campaign for groups of underprivileged people in society, including the poor.

Meanwhile, the Canada International School Vietnam has also decided to allocate a fund of VND3 billion for its immunisation campaign in an effort to vaccinate its teachers and staff, as well as the parents of students, providing the conditions allow.

Despite this initial interest, the Vietnam Vaccine Joint Stock Company (VNVC), the only agency assigned by the Ministry of Health to receive, preserve, and distribute COVID-19 vaccines domestically, has said due to limited supplies, imported vaccines will be available for priority groups first. Specifically, frontline healthcare workers would be at the head of the queue.

Vaccination inoculations will be regulated by the Government, according to a VNVC representative.

Vietnam imported its first batch of more than 117,000 doses of the AstraZeneca vaccine on February 24.

The Ministry of Health (MoH) subsequently published a list of 11 groups of people that will benefit from the vaccination campaign, with priority to be given to frontline healthcare workers, soldiers, border forces, policemen, and those on duty in isolation areas and quarantine facilities.

The MoH is currently considering licensing two additional COVID-19 vaccines produced by Moderna of the United States and Generium of Russia.

Minister of Health Nguyen Thanh Long said the country requires at least 150 million doses of COVID-19 vaccines which can be used to inoculate citizens this year. However, he confirmed the MoH is likely to get only 90 million doses in 2021.

During a recent Cabinet meeting, Prime Minister Nguyen Xuan Phuc requested the MoH and relevant agencies to speed up the national vaccination campaign , considering this to be key to slowing the spread of the virus among the community.

Due to limited supplies of COVID-19 vaccines, the country has yet to launch paid immunisation services, said Associate Professor Tran Dac Phu, former director of the National Preventive Medicine Department and currently a senior member of National Steering Committee on COVID-19 Prevention and Control.

Five more people have tested positive for SARS-CoV-2 in Vietnam, raising the total number of patients in the country to 2,426, the Ministry of Health reported on Friday evening. 
According to the ministry’s report, four of the new patients are from Hai Duong Province.

The imported patient is a 24-year-old Vietnamese woman who illegally entered Vietnam at Hong Ngu District in the southern province of Dong Thap on February 23. She was detained and sent to a local quarantine area upon arrival and tested positive for SARS-CoV-2 on February 25.


The patient is now being treated at the Hong Ngu District General Hospital.

With these new infection cases, the number of Covid-19 patients in Vietnam has increased to 2,426, including 831 locally-transmitted cases reported since the new outbreak started in Hai Duong on January 28. Hai Duong Province alone has recorded 647 cases.

As of 6 pm on February 26, a total of 1,839 Covid-19 patients had recovered and been discharged from hospital. There have been 35 deaths, most of them being the elderly with serious underlying diseases.

At present, as many as 76,495 people who had close contact with Covid-19 patients or returned from virus-hit areas are being monitored at hospitals, quarantine facilities, and at home.