An exhibition to celebrate the success of the 13th Party Congress and the founding anniversary of the Communist Party of Vietnam (February 3).

Featuring 167 works of art, created on a variety of materials, including oil, acrylic, lacquer and silk, all diverse in visual languages and styles. Located in the Southwest of Quang Ninh and on the border to Hai Phong, the economic zone covers a total area of 13,303 hectares built on two functional sub-zones: a nearly 6,900-hectare subzone for seaport services and industrial zone named Dam Nha Mac, and over 6,400 hectares for urban area, high-tech sub-zone.

Quang Yen was established with three development goals, the first of which is to enhance the economic, trade and services connection with other coastal economic zones such as Van Don, Dinh Vu – Cat Hai (in Haiphong), Thai Binh and develop socio-economic links between economic zones and neighborhood areas. Investment attraction to Quang Yen must be in harmony with national defense and security, preservation and promotion of marine ecosystems, historical and cultural relics in the zone.

Secondly, the ambition is to develop Quang Yen into a center of industry, services, logistics, and modern urban area of Quang Ninh and Hong river delta through synchronization of technical and social infrastructure, development of hi-tech, environment friendly industries and R& D centers.

The two above goals must be achieved together with an improvement in workforce quality, increased income and employment opportunities.

The decision will enter into force from November 15, 2020, from which the Economic Zone Tax Package is automatically activated for every new project in Quang Yen regardless of investment size and number of employees. This is a game-changer in enhancing investment climate of Quang Yen economic zone and Quang Ninh province as it could act as a push factor to lure more capital flow from overseas and domestic investors to the zone.

Before the establishment of Quang Yen economic zone, many investors already saw its huge potentials and elaborated a long-term business plan to reap the benefits, including DEEP C Industrial Zones, an industrial zone developer backed by Belgian group Rent-A-Port.

“Connectivity, tax incentives are crucial criteria that investors take into consideration in their search for an investment destination. Quang Yen Economic Zone, with improved regional and global linkages through a series of mega projects and preferential tax incentives soon to be applied, satisfies both requirements.” Said Bruno Jaspaert, General Director of DEEP C Industrial Zones.

“Quang Yen is well-positioned for us to go beyond the industrial zone concept and build a seamless industrial zone ecosystem connected to seaports.” Jaspaert revealed future investment plan of DEEP C in sync with development goal of Dam Nha Mac sub-zone as an industrial zone, seaports and associated services complex.

“Besides, 150,000-square-metre ready-built factory space in DEEP C Quang Ninh is scheduled to be built and put into operation next year.” He added.

With the new change, Quang Yen economic zone now has on offer all the factors that are of prime concern in investment decisions: tax incentives, accessibility, governmental support. To further enhance the investment climate and prepare ready infrastructures for businesses to manufacture in a fast manner, Quang Ninh province is calling for more experienced developers like DEEP C to raise the standard of industrial infrastructures. These players will play an important role in growing Quang Yen toward its outlined path: a high-tech and eco-friendly economic zone that contributes to the regional development of Hanoi – Hai Phong – Quang Ninh economic triangle. 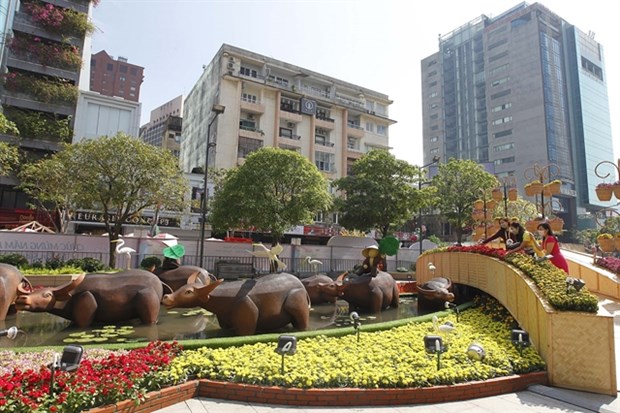 Hundreds of kinds of flowers and 26 statues of the animals are among the highlights of Nguyen Hue Flower Street (Photo: VNA)

According to the organisers, engineers have used 360 VR Tour technology to bring the beauty of the flower street to users.

The use of advanced technologies at the street has created a new platform for the city’s tourism.

The street, with the theme ‘Thanh pho Ho Chi Minh – Hien Dai – Nghia Tinh’ (Ho Chi Minh City – a Modern and Humanitarian City) this year, portrays the metropolis as a pioneer and leader in helping build and develop the country.

The entrance features a display comprising a family of movable buffaloes.

The organisers said due to the COVID-19 pandemic, this year’s flower street would be open daily at 8am-5pm until February 15.

Another annual attraction in the city during the festival, the Tet Book Fair, this year with the theme ‘Knowledge Brings the Future Closer,’ has opened on Mac Thi Buoi, Nguyen Hue and Ngo Duc Ke streets in District 1, and will also go on until February 15.

The fair displays around 20,000 books on various topics from major publishers and distributors.

The Hanoitimes – The modern flyovers are expected to ease traffic congestion on highly transited roads in Hanoi’s downtown.

Hanoi’s government has built a series of flyovers in the inner city which help change the capital city’s urban landscape.

The modern flyovers are expected to ease traffic congestion on highly transited roads in the city’s downtown and clear a series of traffic bottlenecks in Hanoi.

If in 2012, there were only two flyovers, Tay Son and Lang Ha, so far Hanoi has built another 12 flyovers spanning key intersections to reduce traffic jam.

On the way to Lung Pang Peak, mountaineers will encounter a stone fence, which is 1m high and 100m long. According to researchers, the fence is the remains of a citadel built under the Mac Dynasty (1527-1592).

Lung Pang Peak is around 20m wide and 40m high, providing visitors with a panoramic view while standing in the top of the mountain.

Adventurers can cling along the mountainside to explore a cave inside the mountain. The cave stretches a total length of more than 200m, separating into different compartments.

The entrance to the cave is quite challenging, but it’s worth a try as tourists can admire amazing stalactites of all shapes and sizes in the cave. The colourful stalactites look like coral reefs, giant mushrooms. or frozen waterfalls pouring downwards.

After spending half of the day to conquer Lung Pang Peak, backpackers can stay at Khuoi Ki Village to explore the life and sample indigenous dishes of local Tay ethnic people, including fish, chicken, and corn wine.

Particularly, visitors to the locality in winter can taste unique dishes made from chestnut, which is a specialty of Cao Bang Province.

Trieu Xuan Tiep, an owner of a homestay facility in Khuoi Ky Village, said that the scenery of Lung Pang Mountain has drawn much interest from visitors, including foreigners.