Scanner no such element exception 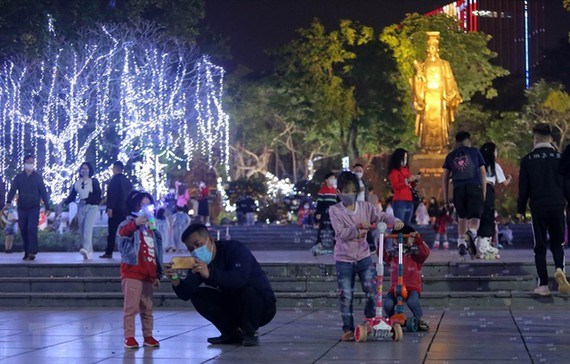 Children and their parents play at Ly Thai To Square in Hoan Kiem Lake. (Photo: VNA)

Hanoi (VNA) – A campaign seeking ideas for Hanoi’s street decoration and lighting for this year has been launched by the municipal Department of Culture and Sports.

According to the organisers, the campaign aims to create a joyful and exciting atmosphere for citizens on national holidays and major anniversaries of the nation, in addition to aiding the political and decorative tasks of the city.

It is also set to contribute to preserving and promoting the national cultural identity and typical values of Hanoi as a thousand-year-old capital, creative city and city for peace, as well as meet the increasing demands of cultural enjoyment of citizens.

Themed ‘Hanoi – Creative City ‘ and ‘Hanoi Congratulates the Party and Celebrates a New Spring’, designs must be of high aesthetic, suitable to surrounding landscape, lightning systems and architecture. They are also expected to contain elements of creativity and follow modern decoration trends.

Entries with the use of new technologies, appropriate materials, elegant colours and safety insurance will be prioritised.

The winning designs will be used for decoration of major streets in Hanoi’s downtown such as Trang Tien, Trang Thi, Ba Trieu, Hai Ba Trung, Ly Thuong Kiet and Tran Hung Dao, among others, at the celebration of the new year of 2022.

The contest is open for contestants of any nationality who can submit unlimited designing plans for various places, provided that they comply with copyright protection law.

The works qualified for the competition must be those which have not been submitted to other contests or introduced to the public in any form.

One special prize, one first prize, two-second prizes, third prizes and five consolation prizes will be given to the best entries.

The submitted designs for street decoration and lighting must be drawn on the A4-sized paper, and then sent to Hanoi’s Department of Culture and Sports from August 24 to 31./.

The Philippines on Wednesday condemned the “cowardly action” of a suspected Chinese fishing vessel accused of abandoning a Filipino fishing crew after a collision in the East Vietnam Sea, while thanking a Vietnamese ship for coming to the fishermen’s aid.

The Chinese ship on Sunday hit a Filipino craft anchored near Reed Bank causing it to sink and leaving 22 crewmen “to the mercy of the elements,” Philippine defense secretary Delfin Lorenzana was quoted by AFP as saying in a statement on Wednesday.

“We condemn in the strongest terms the cowardly action of the suspected Chinese fishing vessel and its crew for abandoning the Filipino crew,” Lorenzana said.

“This is not the expected action from a responsible and friendly people.”

Lorenzana called for an investigation into the collision, and for “diplomatic steps” to be taken toward preventing a repeat of the incident.

However, Philippine defense department spokesman Arsenio Andolong told AFP the agency had yet to confirm whether the vessel was Chinese-registered, adding it was the Filipino fishermen who identified it as such.

The defense chief also thanked the crew of a Vietnamese fishing vessel in the vicinity which he said brought the Filipinos to safety.

Like the Philippines, Vietnam has partial claims over the East Vietnam Sea, where Beijing has illegally built artificial islands with military facilities and airstrips.

Reed Bank is about 150 kilometers off the Philippine island of Palawan.

Although Philippine President Rodrigo Duterte has largely set aside the bitter dispute with Beijing over the resource-rich waterway, Manila does sometimes protest against Chinese action in the East Vietnam Sea.

Competing claims over the East Vietnam Sea is a point of regional contention because trillions of dollars of goods passes through it, and rich petroleum reserves are thought to sit deep beneath its waters.

In recent months, the presence of more than 200 Chinese fishing vessels near Thitu Island, part of Vietnam’s Truong Sa (Spratly) archipelago but illegally occupied by the Philippines, is stirring disquiet in the region.

“Relevant parties need to behave responsibly and make practical and positive contributions toward peace and stability in the region,” Hang said regarding China’s actions.

The Permanent Court of Arbitration in The Hague ruled in July 2016 that there was no legal basis for China’s to claim historic rights to resources within much of the East Vietnam Sea, marking a clear win for Vietnam in maritime territorial disputes with neighboring China.

China, which boycotted the hearings at the court, vowed to ignore the ruling and said its armed forces would defend its sovereignty and maritime interests.