The project, implemented by the Saigon Children’s Charity (saigonchildren), was inaugurated on January 8.

The project has built a new classroom, a toilet block and a playground on a area of 357 square meters for the Kim Đồng Primary School in Kinh Cùng Township, Phụng Hiệp District.

As part of the inauguration ceremony, BASF and their partners donated children’s books and HP donated a computer along with a printer to support teachers and students.

At the ceremony, Angelique Masse Nguyen, Head of Fundraising and Communications at saigonchildren, said “Building schools in remote areas is one of our core programmes to provide disadvantaged children with access to education. When we build a school, we are in fact contributing bricks to build a generation’s future.”

Before the renovation, the schoolchildren attended their classes in rundown facilities that were built in 1996 with basic structures and materials. The new facilities will not only give them a safer and more comfortable place to learn, but also help them practice hygiene and develop various other life skills through play.

February 16 marked the end of the Lunar New Year holidays when many cities and provinces, including Hanoi and Ho Chi Minh City, announced that students would study from home until the end of the month as they sought to prevent the spread of the novel coronavirus.

Nguyen The Kha, director of telecoms-mobile products, FPT Shop said: “The sudden surge in demand for laptops came after schools announced classes would be online. We had anticipated higher demand but were still surprised by the increase.”

One shop on Thai Ha Street in Hanoi’s Dong Da District, where many electronics stores are clustered, reported unusually high sales of around 100 webcams a day between February 17-19.

Some stores ran out of stock just like in March last year when the coronavirus outbreak first began.

ShopDunk, a chain that sells Apple products, said iPad sales are typically modest, but in recent days it has accounted for 20 percent of total sales, second only to the iPhone 12 Pro Max.

The Hanoitimes – The move is expected to help the South Korean tech giant stay competitive.

Samsung Electronics will end Chinese personal computer production as it looks to shift production to Vietnam to cut costs and remain competitive in the PC business, Nikkei Asian Review reported.

The plant in the city of Suzhou will close as soon as this month and convert part of the facility into a research and development center, while Samsung informed employees of the factory stoppage and job cuts at the end of July, Nikkei reported.

The South Korean tech group looks to shift production to an existing factory in Vietnam. A spokesman said the decision to shut the Chinese plant was based on the need to find a cost advantage.

Samsung Electronics Suzhou Computer, the unit that runs the Chinese plant, was established in 2002 as a PC assembly center. The computers made at the factory were sold mainly in South Korea, North America and China.

At its peak, Suzhou Computer employed 6,500 people, South Korean media say. The headcount has since shrunk to 1,700.

Japanese makers have left the business as top players dominate the market. Samsung will continue to make PCs, but the company will cut labor and other costs by relocating production.

Samsung once operated three smartphone factories in China, but the group shut down all Chinese production at the end of 2019. The capacity has been transferred to Samsung’s Vietnamese facilities or delegated to contract manufacturers.

According to Samsung’s statistics, around 50% of Samsung’s smartphones and tablets are produced in Vietnam and exported to 128 countries and territories, including the US, Europe, Russia and Southeast Asia.

In early March, Samsung Vietnam started construction its largest R&D center in Southeast Asia in the west of Hanoi at a cost of US$220 million. The company expected Vietnam would not only be its largest production hub, but also a strategic base for R&D. 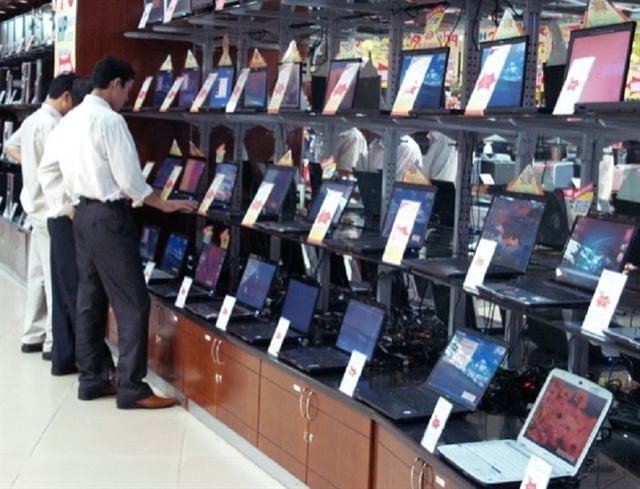 HCM CITY — Work from home and study from home amid the new COVID-19 wave have caused demand for laptops to skyrocket.

Parents in HCM City and elsewhere said while earlier they had been content to have just one common laptop at home or have their children use smartphones, they now have to buy laptops for their children’s online classes.

Nguyễn Đình of the city’s Bình Thạnh District said he decided to buy a laptop for his son because he could not let his son share his constantly, but most shops had run out of those priced at below VNĐ 10 million (US$434).

Lê Trí Công, director of Trí Công Informatics Commerce and Service said sales of desktops and used laptops have also increased as people look for cheap computers for their children.

Many retailers said certain laptop brands are under-stocked amid the rising demand, but supply is hampered by COVID-19.

But despite the demand, prices have remained relatively steady, with many retailers even offering promotions such as discounts and free programmes. — VNS

The Hanoitimes – Vietnam’s creative industry runs the risk of being left behind regional countries’ if it is unable to keep up with the rapidly changing environment, according to RMIT researchers.

An exhibition titled “No Rain without Clouds: Preserving Vietnamese Art & Culture for the Future” kicked off the Vietnam Festival of Creativity & Design 2020 on November 7 at the Vietnamese Women’s Museum in Hanoi.

It is open to the public both virtually via the Kunstmatrix digital platform and physically at the Vietnamese Women’s Museum in Hanoi from November 7 to 15. Comprising 30 works curated by RMIT University lecturers Dr. Emma Duester and Ms. Michal Teague, the exhibition will be the first to bring the RMIT collection outside the university’s campuses.

The exhibition is supported by a program of events, including a national art review competition and a panel discussion. The panel will feature an artist from the RMIT Contemporary Art Collection, as well as the curators of the collection and the No Rain without Clouds exhibition.

The Collection is a typical example of art digitization in Vietnam. Most of the collection is already accessible digitally on RMIT’s website with 3D scanning.

The university’s long-term goal is to make this collection reach the widest audience possible, in order to raise public awareness of the significance, quality, and richness of contemporary art in Vietnam. It is also one motivation behind the exhibition.

Over the past four months, RMIT University lecturers have been researching how art and culture professionals in Hanoi are harnessing digital technology to develop the creative industries. The focus has been on how institutions are digitizing their collections, as well as the challenges they are facing in this process.

So far, the two researchers have interviewed 20 people and explored two creative hubs in particular, namely the Matca Space for Photography and the Vietnamese Women’s Museum. The findings have shown that the collections of many arts and cultural institutions in Hanoi are, in fact not yet publicly displayed on a digital platform, as the sector has been only starting to digitize collections.

“The common challenges for Hanoi institutions – and we believe for other institutions across the country as well – are a lack of human resources in terms of time and capacity, lack of capital investment and technical equipment like 3D scanners in order to properly digitize cultural objects,” said RMIT Professional Communication Lecturer Dr. Emma Duester.

“These issues are hindering the ability of the art and culture sector to create international connections or engage with a wider audience in Vietnam,” Dr. Duester said.