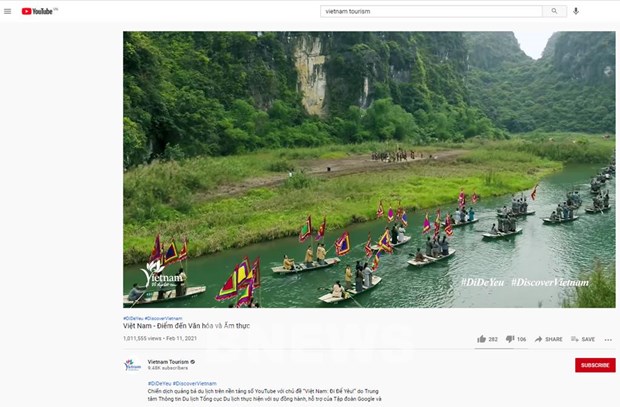 Two video clips are released by the Vietnam National Administration of Tourism (VNAT) on its official YouTube channel – Vietnam Tourism – to give audience a glimpse of Vietnam’s most popular attractions and the country’s culture and cuisine. (Photo: VNA)

Hanoi (VNA) – The Vietnam National Administration of Tourism (VNAT) has made use of digital platforms to catch attention of travellers and promote tourism in the country.

The promotional clips, which have so far hit more than one million views each, were produced with the help of many famous digital content creators, including Miss Universe Vietnam 2017 H’Hen Nie and travel bloggers Khoai Lang Thang, Chan La Ca, Fly Around Vietnam, Flycam 4K, Minh Travel and Oops Banana.

They form part of a tourism promotional campaign on digital platforms initiated by the VNAT under the support of Google and Vinpearl.

Due to impacts of the COVID-19 pandemic, international visitor arrivals in Vietnam in February declined by 38.3 percent month-on-month and 99.1 percent year-on-year to just 11,000. In the first two months of the year, the foreign arrivals nosedived 99.1 percent from the same period last year.

Most of the visitors were foreign experts and skilled workers who work for projects in Vietnam as the country maintains travel restrictions to contain the spread of the COVID-19./.