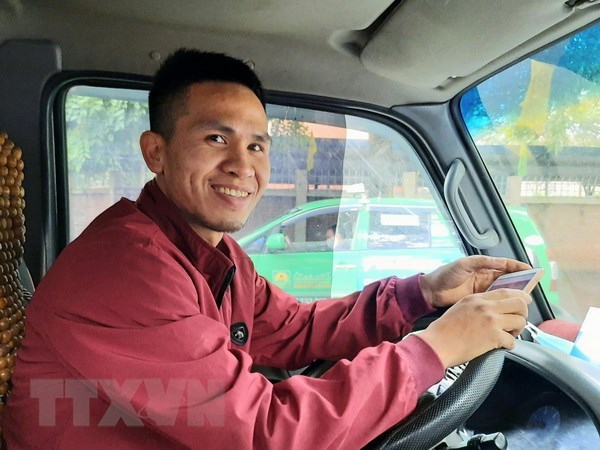 Nguyen Ngoc Manh , a delivery driver, has been honoured for his courageous action (Photo: VNA)

Hanoi (VNA) – Nguyen Ngoc Manh, a delivery driver, has been hailed a hero after he caught a baby who had fallen from the 13th storey of a apartment block in Hanoi.

He said he heard desperate screams from neighbours alerting people below that the child had climbed over a balcony railing and was clinging on for her life.

The 31-year-old driver climbed onto the corrugated roof of a small structure on the ground floor moments before the three-year-old girl lost her grip.

As she plummeted to the ground, Manh managed to grab her and pluck the baby to safety.

“I don’t think I’m a hero. Anybody would have done the same,” he said.

On March 1, Prime Minister Nguyen Xuan Phuc sent a letter praising Manh for his bravery. In his letter, he wrote “I praise Nguyen Ngoc Manh for his courageous action and high sense of responsibility.”

He asked the Hanoi People’s Committee and the Central Committee of Emulation and Commendation to honour Manh’s noble gesture, kindness and compassion so that there will be more people like him in society.

The chairman of the Hanoi People’s Committee praised the driver for his bravery.

Although the child suffered a dislocated hip from the fall, she is recovering well in hospital and is expected to be allowed to leave soon./.

Around 5:30pm on February 28, an unattended girl climbed over the balcony of her flat and hung on the outside of the building.

Witnessing the scene, residents in the opposite tower screamed for help and, just a few seconds later, the girl’s hand slipped and she fell.

At that moment, Manh, who was waiting for his customer on the ground, noticed the emergency and quickly climbed to the roof of the lobby and caught the falling girl.

The girl fortunately only suffered minor injuries and was immediately admitted to hospital while Manh’s action has been receiving plenty of praise on social media.

In his letter, Prime Minister spoke highly of Manh’s swift and brave rescue effort and asked the relevant agencies to honour the 31-year-old lorry driver so that his example of kindness and responsibility can be spread throughout society.

A 3-year-old girl miraculously survived falling from the 13th-floor balcony of an apartment building in Hanoi, caught by a passer-by.

On the evening of February 28, the unsupervised toddler named N.P.H climbed over the balcony of her family’s home on the 13th floor of Nguyen Huy Tuong Apartment Complex, Thanh Xuan district, Hanoi. She managed to grab the railings but let go just several seconds after.

At the time, Nguyen Ngoc Manh, who was on a courier run in the complex, spotted the girl and quickly climbed onto the first floor’s roof to catch her.

The girl was rushed to the hospital where X-ray results showed she had a dislocated hip joint and several broken bones, but no further trauma.

Her savior, a 30-year-old contract delivery driver from Dong Anh District, Hanoi, got his wrist sprained in the incident.

A Vietnamese man has been sentenced to one year in prison for organizing a South Korean man’s illegal entry into Cambodia from Long An Province, located in Vietnam’s Mekong Delta region.

The People’s Court of Long An Province on Monday handed down the sentence on Nguyen Van Luy, a 33-year-old man dwelling in An Thanh Commune in Ben Cau District, situated in southern Tay Ninh Province.

According to the indictment, Luy worked as a ‘xe om’ (motorbike taxi) driver at the Moc Bai border gate in Tay Ninh, where he got to know a South Korean man named Kim.

On August 6, 2020, Kim texted Luy to ask the Vietnamese man to help his South Korean brother cross the border into Cambodia.

After accepting the job for US$1,000, Luy asked an unknown person, who worked as a motorbike taxi driver in the area of Tho Mo Market in My Quy Tay Commune in Long An’s Duc Hue District, to transport the South Korean man to Cambodia for a wage of VND10 million ($434).

On August 7, 2020, Luy booked a car to pick up the South Korean man at a hotel on Hau Giang Street in Tan Binh District, Ho Chi Minh City and take him to Tho Mo Market.

From Tho Mo Market, Luy brought the South Korean man to the border area in Hamlet 1 in My Quy Tay Commune at 8:30 pm on the same day and was arrested by My Quy Tay Border Station’s patrol team.

HCMC – The Ministry of Finance has warned the public about cryptocurrency platforms founded by individuals and organizations at home and abroad with unidentified legal representatives.

Cybercrime associated with cryptocurrency businesses over the years has emerged increasingly complicated, with numerous sophisticated scams. Recently, the police of Danang City issued a warning about a new trick being used by cybercriminals, wherein these suspects instructed local residents to visit the App Store and CH Play to download stock exchange mobile apps to make an investment.

Commenting on the issue, the ministry said today, March 2, that the State Securities Commission has been teaming up with the police to tackle similar cases linked to cryptocurrencies and securities in many localities nationwide.

The forces discovered that cryptocurrency trading platforms were operating more frequently, such as the Rforex exchange via the website www.rforex.com in Hanoi’s Ba Dinh District or the Emrfx exchange at www.emrfx.com in the north-central province of Nghe An.

The ministry added that only the Hochiminh Stock Exchange and the Hanoi Stock Exchange were allowed to operate stock trading activities in Vietnam. According to the Law on Securities, virtual currency is not considered a security.

The ministry had established a research team on virtual currencies and properties, aimed at conducting researching activities and suggesting management policies over the issue within the authority of the ministry.

The number of foreign arrivals reached 11,000 in February alone, down by 38.3% from January’s figures.

The GSO attributed the sharp fall to the serious impact of the COVID-19 pandemic, especially the resurgence of the virus in January, on the tourism industry.

The majority of foreign arrivals in the reviewed period were experts, technical workers, and drivers who transported goods on roads through border gates, according to the GSO.

In a recent report produced by the Vietnam National Administration of Tourism (VNAT), this year is likely to prove extremely challenging for the local tourism industry. Vietnam has yet to reopen its borders to international tourists due to COVID-19, therefore the number of foreign arrivals will remain low in the coming months.

Though Vietnam represents one of the bright spots for effectively controlling the spread of COVID-19, the local tourism industry has been greatly impacted by the pandemic.

Relic sites, sightseeing spots, and entertainment areas nationwide have been forced to shut down several times, with many travel agencies finding it difficult to do business amid COVID-19 fears.

The VNAT has recently carried out domestic travel stimulus schemes aimed at boosting online tourism advertisement through social networks, including YouTube, with the aim of helping the local tourism industry to recover in the post-COVID-19 period.