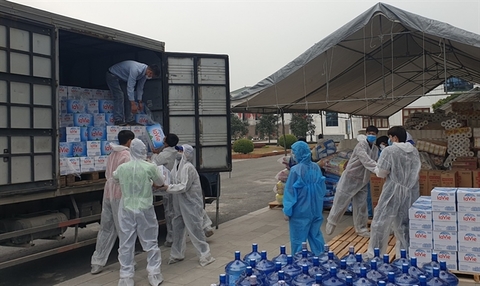 La Vie Co., Ltd. collaborates with the Women’s Union in Hai Duong Province to send mineral water to some isolated places in Chi Linh Town on February 4. — Photo courtesy of the company

It is co-operating with the Women’s Union in Hai Duong Province, Hy Vong Foundation and local authorities to allocate the water.

Since the first outbreak of Covid-19 in early 2020 La Vie has been one of the pioneers in supporting the frontline in the fight against the pandemic, and has also supported the community and small business households affected by the pandemic, spending a total of more than VND23 billion (US$999,407). — VNS 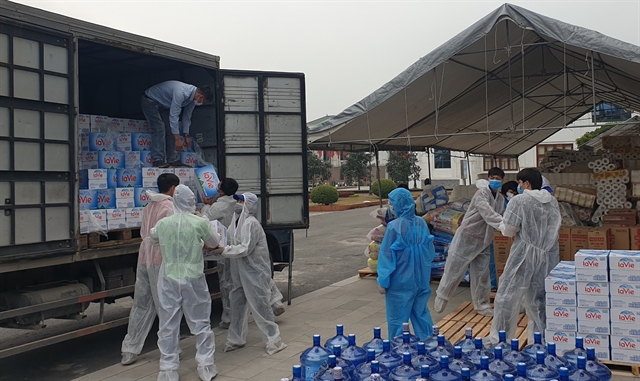 La Vie Co., Ltd. collaborates with the Women’s Union in Hải Dương Province to send mineral water to some isolated places in Chí Linh Town on February 4. — Photo courtesy of the company

It is co-operating with the Women’s Union in Hải Dương Province, Hy Vọng Foundation and local authorities to allocate the water.

Since the first outbreak of Covid-19 in early 2020 La Vie has been one of the pioneers in supporting the frontline in the fight against the pandemic, and has also supported the community and small business households affected by the pandemic, spending a total of more than VNĐ23 billion (US$999,407). — VNS

The country has recorded 1,074 SARS-CoV-2 infections so far. Of the total, 691 were locally-transmitted cases, including 551 linked with Da Nang city since the latest coronavirus wave hit the locality on July 25.

As many as 999 patients have recovered while the fatalities remain at 35. Most of the fatalities were the elderly with serious underlying health conditions.

Among the patients still under treatment, three have tested negative for the virus once, four twice and 12 thrice.

There are 16,829 people having close contact with confirmed cases or coming from the pandemic-hit regions under quarantine at present, including 272 in hospitals, 10,995 in other quarantine sites, and 5,562 at home.

As the COVID-19 pandemic can return at any time, the Ministry of Health recommended people wear face masks in crowded places, and wash hands with soap or hand sanitizer regularly.

Two of the new cases are experts from Taiwan (China) who entered Vietnam through Huu Nghi border gate in the northern province of Lang Son on September.

The other one is an Indian expert arriving in Hanoi on a September 13 flight.

They were quarantined immediately after arrival and currently receive treatment at the Hanoi-based National Hospital for Tropical Diseases.

Of all the cases, 691 were locally-transmitted, including 551 linked with Da Nang city since the latest coronavirus wave hit the locality on July 25.

As many as 999 patients have recovered while the fatalities remain at 35. Most of the fatalities were the elderly with serious underlying health conditions.

Among the patients still under treatment, two have tested negative for the virus once, four twice and 13 thrice.

There are 16,829 people having close contact with confirmed cases or coming from the pandemic-hit regions under quarantine at present.

As the COVID-19 pandemic can return at any time, the Ministry of Health recommended people wear face masks in crowded places, and wash hands with soap or hand sanitizer regularly.

Prof. Dr. Duong Khac Trung emerges as a noted name among Vietnamese academia in 2020, as he was appointed to the research chair position of the UK’s renowned Royal Academy of Engineering (RAENG) to study the next chapter of telecommunication advances, including 6G development.

As the COVID-19 pandemic has yet to be kept under control in the UK where he currently lives, Duong Quang Trung finally spared some time out of his schedule to sit down with Tuoi Tre Newspaper and unpack his story as a Vietnamese scientist who achieved groundbreaking feats at another country.

The road to 6G

Each year, the UK’s Royal Academy of Engineering (RAENG) appoints esteemed scientists pursuing radical research topics into their coveted Research Chairs and Senior Research Fellows positions, which allows them to establish world-leading research teams and work on their study in five years using grants from the RAENG.

Only four Research Chair spots were awarded in 2020 for works in antimicrobial resistance, reducing energy use and emissions from compressors, developing AI-powered dialogue systems and 6G networks, the last of which was an effort led by Duong Quang Trung.

For the time being, the world is still making its entrance into 5G technology, with 5G network coverages remain scarce, concentrating mostly in Europe, North America and selected locales of Asia.

In the meantime, multiple research efforts, including the work of Trung and his associates, are sketching the outlines for 6G, the next-gen mobile communications.

According to Trung, a cellular system must undergo a long theoretical research phase before its commercial rollout, an example being the first research efforts for 5G that dated back over 10 years ago.

As demands for communications in industries and personal uses progress, a new cellular network will emerge every 10 years to satisfy it, Trung denoted.

For now, the research groups are predicting tech applications to emerge in this decade to develop an adequate broadband network system.

“Our rapidly changing world is currently undergoing a ‘fourth industrial revolution’ that is currently being driven by 5G communications and cyber-physical systems,” Duong stated.

He vows to take that revolution forward into the next decade and for 6G to enable a future that benefits all of society – e.g., remote medical diagnosis and surgery, autonomous self-driving vehicles, virtual and augmented reality for education, healthcare, entertainment, and disaster management.

Unlike previous generations of cellular communications, 6G will focus not only on faster data speeds for traditional services, but also on a massive interconnection of autonomous machines.

6G networks will address the specific needs of internet of things (IoT) devices by achieving two conflicting targets: maintaining the ultra-reliability of 99.999 percent of 5G and reducing latency (time between data transmission and reception – currently around 1ms for 5G) to near-zero.

Duong Quang Trung was born in 1979 in Hoi An City in the central Vietnamese province of Quang Nam.

After graduating the Ho Chi Minh City University of Technology, he completed his Master’s degree in Korea and his PhD study at Switzerland using full scholarships from the respective host country’s government.

In 2013, he was granted the assistant professor post at Queen’s University Belfast – one of UK’s top ranking higher education institute – before becoming a full professor of the school in August 2020, making the record as one of the fastest runs to the position in the school’s history.

An outstanding researcher in the field of telecommunications, he has received multiple awards for his work, most notably the Newton Prize given by the UK government in 2017.

Nevertheless, his linkage with the homeland only grows stronger after he made a career for himself out of the country.

In 2015, Trung co-founded the International Summer School for Science, an annual event that equips budding scientists with crucial skills for a career in science, including finding research topics, hunting scholarships, writing papers for science journals and working with professors.

After five iterations, the initiative helped over 100 of its alumni scoring PhD candidacies at top research institutions of the world.

According to Trung, he started the International Summer School to provide guidance for promising researchers that lack access to career-defining resources and skills, as he has gone through the same experience 20 years ago.

“I also want to spread the passion for science among youths, so they can find their own success and pass on the inspiration to the next generations,” Trung professed.

As Trung sees it, Vietnamese STEM majors are well-versed in foundational knowledge, but falls behind in big-picture thinking compared to their Western counterparts.

They also tend to be more withdrawn in seminars and groups discussions, he added, noticing it might be attributable to the bookish leaning and negligence of soft skills in Vietnam’s education system.

The homely scent of agarwood

The 2021 Lunar New Year holiday, the time for Vietnamese to reunite and rejoice with their family, has drawn near.

It also marks the ninth consecutive times Trung spent the holiday away from his family, as his lecturing job usually overlaps the Lunar New Year timeframe, plus his kids still go to school in the UK around that time.

“Though, it can’t equate the spirit of the Lunar New Year at home, starting from the Kitchen Gods’ ritual at 23rd day of the twelfth lunar month, then people flocking to the markets, then the New Year’s Eve and the holidays near the family.”

As the COVID-19 pandemic shuttered all commercial flights between the UK and Vietnam, Trung is still yearning for a day he can return and immerse himself in the homely scent of agarwood in Hoi An City.

“I’m reminded of that scent every Lunar New Year away from home. I feel like just yesterday.”