HCMC – Profit-taking pressure on several bluechips caused the main VN-Index of the Hochiminh Stock Exchange to waver for a while, but the index managed to bounce back and maintain its winning streak thanks to the support of lender VCB, housing developer VHM, and dairy firm VNM today, April 20.

The benchmark index entered the afternoon phase in a bullish mood and stayed above 1,285 points, or rising by 25 points against its reference price, before slipping quickly due to increased profit-taking.

Closing the session, the VN-Index added 7.7 points, or 0.61% over the session earlier at 1,268.28, with 187 stocks rising and 227 others inching down. More than 843 million shares worth over VND23 trillion were transacted on the southern bourse, up 3% in volume and 16% in value compared to the previous session. Of the total value, shares traded in put-through deals accounted for some VND1.9 trillion.

Regarding decliners in the basket, financial service provider TCH was the poorest performer but it only shed 2.6%. Sugar maker SBT, brokerage SSI, lender TPB also edged down around 2%. Largecaps such as VIC, HPG, TCB, NVL, CTG, and MSN fell around 1%.

On the northern bourse, the HNX-Index was volatile before reversing course to end higher, adding 0.73 points, or 0.25% versus the previous session to finish at 296.48, with 57 gainers and 84 decliners.

Lender SHB stole the limelight on the Hanoi market as it increased 2.6% and was the most actively traded stock on this bourse with over 30.44 million shares transacted.

Under a new plan issued recently by the municipal People’s Committee for the 2021-2025 period, HCM City will continue to improve the Provincial Competitiveness Index (PCI) while seeking measures to improve the investment and business environment towards easier, more transparent and fair orientations.

The city expects to become one of the five leading localities in PCI by 2025.

To this end, the municipal People’s Committee has introduced a number of measures, including strengthening the leadership and direction of improvements to the city’s competitiveness as well as the local business and investment environment, and building plans to speed up administrative reform.

To increase the PCI component indexes, the city targets that at least 93 percent of business registration requests and 40 percent of investment licence issuance will be processed online.

It will also enhance the operational efficiency of the centre for land reserve development to prepare land for investors.

Along with making public all processes regarding administrative procedures to make it easier for people and businesses to follow, the city will also work to reduce the time needed for processing and improve public service quality.

The municipal People’s Committee has assigned the Department of Planning and Investment to cooperate with the Vietnam Chamber of Commerce and Industry (VCCI) to design and implement a set of criteria to assess the capacity of departments, sectors, and localities around the city in applying measures to improve the business and investment environment and the PCI in the 2021-2025 period. 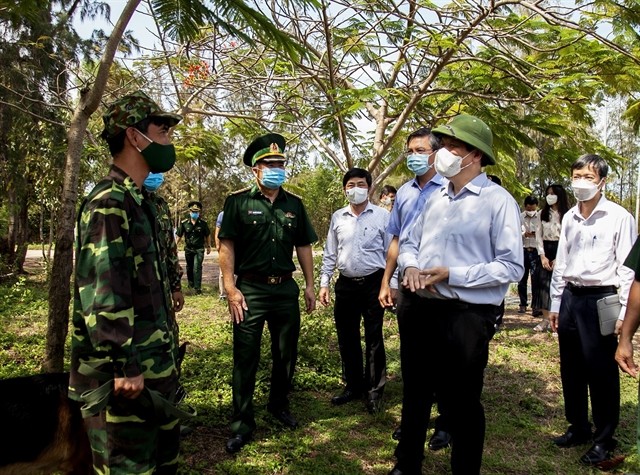 On April 18, a team led by Minister of Health Nguyen Thanh Long travelled to Kien Giang Province to meet the local Steering Committee for COVID-19 Prevention and Control and checked activity at the international border gate and stations, quarantine areas, and a health center in Ha Tien city.

Speaking at the meeting, Ha Van Phuc, head of the province’s Department of Health, said that COVID-19 prevention and control at the border has been very stressful because neighbouring countries are seeing an increase in cases.
The province is at high risk of community transmission, Phuc said.
The control of migration through trails, border crossings and the sea is difficult, he added.
The province has already found 142 illegal immigrants.
The working conditions for soldiers at border stations are also difficult as they have to ensure strict control of migrants via the border and sea, he said.
All COVID-19 patients who enter the province are brought to Ha Tien District Health Center for treatment, he said, adding that the center is small and can treat only 30 patients.
Phuc said the ministry should allow the province to set up a field hospital. The next day, on April 19, Cho Ray Hospital in HCM City sent a team including 13 medical officials to the province to help set up the field hospital and COVID-19 prevention and control activities.
The province has three COVID-19 testing machines with the maximum capacity of 600 samples per day, but this number does not ensure rapid tracing as the ministry has required, he added.
Phuc said the ministry should give priority to providing two more real-time reverse transcription polymerase chain reaction machines and other items related to COVID-19 tests.
Moreover, the province needs 20,000 rapid tests for COVID-19 diagnosis and 10 million pairs of medical gloves.
Phuc also suggested that the ministry should give priority to providing COVID-19 vaccines in the next phase of the national vaccination drive.
Minister of Health Nguyen Thanh Long said that the province should prepare for worst-case scenarios if COVID breaks out again.
Prevention and control of illegal migrants via the border and sea should be strengthened, Long said, adding that communication to encourage local people to become collaborators in COVID-19 prevention and control should be enhanced.
He told the HCM City Pasteur Institute and relevant agencies to help the province upgrade its testing capacity.

Mai Ho, 29, and Le Han Tue Lam, 26, were named in the financial and venture capital category. Chau Bui, 23, was listed in the arts category.

She received a full scholarship from the University of Westminster College in the U.S. where she studied finance and accounting. After graduation, she worked with several investment funds in the U.S., including working as a stock market analyst at investment bank Goldman Sachs.

Lam joined Seoul-based investment firm Nextrans in 2019 as a general manager evaluating and investing in early stage startups in Southeast Asia and the U.S.

Earlier, she was one of earliest members of Vietnam-based enterprise software platform Base.vn, and worked as a universal banker for Citi in Hanoi.

Bui, whose full name is Bui Thai Bao Chau, was named the most stylish social media personality at the ELLE Style Awards 2019.

“Selected from over 2,500 nominations and vetted by our team of reporters and a panel of A-list judges, this year’s list features 300 young entrepreneurs, leaders and change makers across the Asia-Pacific region who are braving the challenging environment brought about by the Covid-19 pandemic and finding new opportunities amidst the new normal,” the Forbes magazine noted.

The list selects 30 honorees for each of the 10 categories.

The criteria for honorees making the list include their “demonstration of leadership, how they embody the entrepreneurial spirit that is synonymous with Forbes , and their potential of success in their industry. Other factors like innovation, disruption – and size and growth of their ventures in some categories – play a role in making the final decision,” the magazine said.

Last year, Vietnam had six representatives in the 30 under 20 list.

Airlines are offering more flights on the national holidays marking the Reunification and International Labor Day, but air tickets for some routes are running out because of high demand. 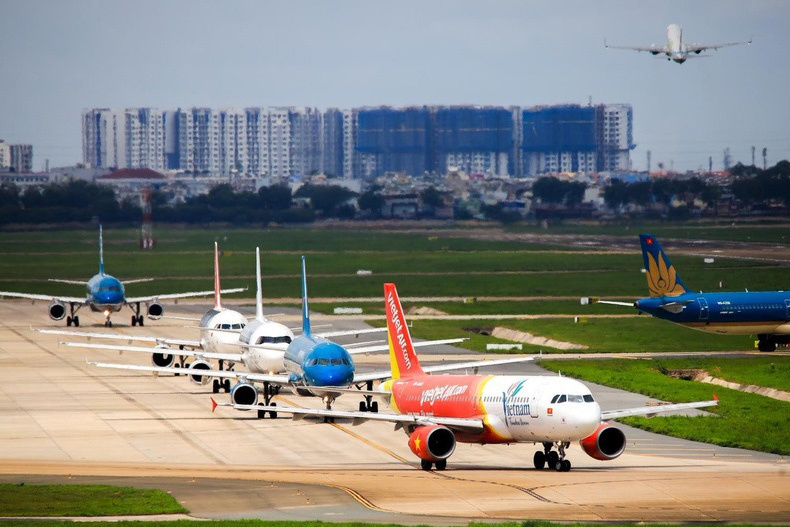 Vietnam Airlines Group, including VNA, Pacific Airlines and VASCO, have announced the availability of 500,000 more seats, or nearly 2,600 domestic flights, for the rush days (April 28–May 3).

Bamboo Airways in late March and early April planned to increase the transport output by 12-15 percent on backbone routes and tourism routes during the holidays.

Despite the higher number of flights, no more air tickets are available for some routes, while airfares are high because of high demand.

Passengers booking tickets on April 18 have to pay nearly VND8 million to fly one way from Hanoi to Phu Quoc on April 29 and return on May 3 with VNA.

If they booked tickets half a month ago, they would have paid half of the airfare.

Meanwhile, Bamboo Airways’ return ticket for Hanoi – Phu Quoc is VND7.3 million, while Vietjet’s is VND7 million. If flying from Hanoi to Quy Nhon with Vietnam Airlines, one would have to pay VND4.7-5.4 million for return economy-class ticket. If they choose Vietjet or Bamboo Airways, they have to pay VND4 million.

Meanwhile, if they book tickets half a month in advance, they could save nearly VND1 million.

The Vietnam Railway Corporation has also offered tens of trains more to satisfy the increasing travel demand during holidays. According to the Hanoi Railway Transport JSC, the additional trains are mostly on April 29, May 2-3, from Hanoi to Thanh Hoa, Vinh, Dong Hoi and vice versa.

In the south, there will be nearly 30 more trains on routes from HCM City to Phan Thiet, Nha Trang, Quy Nhon, Quang Ngai and Da Nang on April 28 – May 3.

Of these, tickets have run out for Saigon – Phan Thiet, Saigon – Nha Trang and Saigon – Quy Nhon routes.

Many flights using large planes and departing at the same hour between 5:30am and 9:30am have also added to the crowded situation.

In addition, many passengers are taking multiple carry-on bags, prolonging the time needed to scan items.

Adding to the congestion are the further random checks of at least 10 per cent of passengers who have already gone through security screening.

This is being done under instruction from the Civil Aviation Authority of Việt Nam, which asked for stronger security checks. However, to reduce congestion, TIA has stopped implementing this security check.

As for the centralised take-off and landing in the morning and afternoon causing congestion at the airport, a representative of Vietnam Airlines said the landing turn slots were granted by the Việt Nam Aviation Administration.

In fact, the flights of Vietnam Airlines and Pacific Airlines are spread out through the day and the HCM City – Hà Nội route has a new flight every 30 minutes.

However, due to local travel demand, which is mostly in the morning and during peak hours, congestion has occurred fairly often during these time frames.

To reduce congestion, especially during the upcoming holidays of April 30 and May 1, ACV and TIA decided to open 100 per cent of security scanners and allocated more staff to help customers.

They have also added informative signage to smooth the passenger security scanning process, among other measures.

ACV has told TIA to develop efficient operation plans, including ensuring clearance in security areas between Hall A and Hall B, opening more aircraft doors for domestic flights, and adding more staff to check up on all passengers and ensure that they do not miss their flights.

Another option being considered by the airport is installation of more security scanners in Hall A.

For a long-term solution, ACV is working with authorities to speed up the handover of land that will be used to build the new passenger terminal T3, with a capacity of 20 million passengers per year.

It will also invest in more modern devices to ease congestion in the area.

Meanwhile, to reduce pressure during rush hours, Vietnam Airlines has encouraged passengers to complete their check-in on its website or at automatic check-in machines prior to their flights.

“These solutions have demonstrated Vietnam Airlines’ effort to reduce the load and avoid congestion at large airports such as Hà Nội and HCM City,” a representative said.

He said that passengers who plan to travel on the occasion of April 20 and May 1 should book flights soon and complete booking requirements as much as possible online.

“The filling of medical declarations has also worsened the congestion problem at the airport. This is a mandatory procedure before departure, and passengers should do it at home to save time,” he added.   VNS