In the fourth quarter of the year, Phytopharma’s consolidated after-tax profit dropped 17.9 per cent from the same period last year. The company blamed the fall mainly on the decrease in profit from its units and a fall in commercial discounts from suppliers.

2020 broke the continuous growth momentum in revenue and profit in the recent five years.

Operating in pharmaceutical distribution, Phytopharma’s gross profit margin is said to be quite thin, at only 2.2 – 3.5 per cent. As a result, the after-tax profit of the company remains modest in comparison with its revenue. In the latest six years, the ratio of after-tax profit to revenue was less than 1 per cent. In spite of that, Phytopharma has still been paying dividends to shareholders annually.

Currently, Phytopharma is the distributor of many multinational corporations, including Pfizer, Zuellig Pharma, and DKSH. In July 2020, Phytopharma signed a pharmaceutical distribution partnership with AstraZeneca Vietnam Co., Ltd.

Being among the few airlines with continuous expansion in fleet size, the number of flights operated, and number of passengers serviced during the catastrophic 2020 were all achievements that paid off financially, marking Bamboo Airways as one of the few profitable airlines in the world.

By seizing the opportunities arising from the government’s drastic and effective pandemic prevention policy, Bamboo Airways has proactively innovated and timely implemented a series of solutions to overcome difficulties.

In terms of finance, the airline actively mobilised capital to reinforce its capacity, including raising capital from major shareholders, including its parent company, FLC Group; negotiated with bank partners and financial institutions to raise capital and adjust financial terms accordingly. In addition, Bamboo Airways has always prepared feasible business plans and secured assets.

With its network of service providers, Bamboo Airways actively worked and negotiated to come to acceptable cost agreements to secure the financial health of the airline.

Regarding the flight network, the airline timely restructured and continued to consolidate its flight network concentrating on the domestic market, opening routes to potential destinations, especially niches and routes connecting with the FLC ecosystem.

Some eminent direct flights of the Airlines’ strategy in 2020 include the roadmap connecting Con Dao, Rach Gia-Kien Giang, Phu Yen, and Can Tho, among others.

These new routes of Bamboo Airways received positive reviews from passengers, contributing to accelerating the process of occupying approximately 20 per cent of the airline’s market share, nearly doubling that of last year.

With regard to its fleet, the airline is currently operating nearly 30 aircraft, including the most advanced aircraft in the world such as wide-body Boeing 787-9 Dreamliner, narrow-body A321NEO ACF, and Embraer E195 jets. The fleet size is expected to reach 50 aircraft in 2021.

Another critical segment generating great revenue for Bamboo Airways this year was a series of new products and combos, adapting to the needs of the market and passengers at each particular period, which include 5-star nationwide flight-resort-golf package combo, multifunctional Bamboo Pass, and Branded Fares, among others.

In 2020, Bamboo Airways has delivered more than four million passengers, 40 per cent more than in 2019. Bamboo Airways holds the badge of the airline with the fastest recovery after the pandemic, according to statistics of the Civil Aviation Authority of Vietnam.

Especially, the airline continuously affirmed its position as the airline with the highest on-time performance, with the nearly perfect average of 95.8 per cent. In November 2020, Bamboo Airways received the title of Asia’s Leading Regional Airline in 2020 for its contributions in the aviation industry throughout the year. 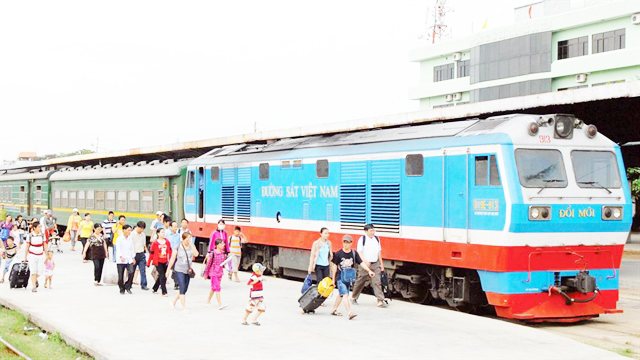 HÀ NỘI —  Vietnamese railway companies reported large losses in 2020 due to the impacts of the COVID-19 pandemic.

Cost of goods sold accounts for most of net revenue, thus gross profit totaled only over VNĐ8 billion, down sharply compared to VNĐ42 billion in the same period of 2019. After deducting expenses, the after-tax loss in Q4 was estimated at nearly VNĐ55 billion, while in the same period last year its loss was just more than VNĐ12.5 billion.

Previously at the General Meeting of Shareholders in 2020, the company approved a plan for 2020 which expected total revenue to reach VNĐ1.63 trillion, and a loss up to VNĐ335.4 billion due to the influence of COVID-19.

Saigon Railway Transport JSC (SRT) announced Q4 revenue of VNĐ282 billion, down by 22.5 per cent year-on-year. It reported an after-tax loss of more than VNĐ105 billion.

Việt Nam Railway Corporation (VNR) also announced that its revenue in the first nine months of 2020 decreased 34.2 per cent year-on-year, equivalent to a decrease of VNĐ1.18 trillion. — VNS

The Hanoitimes – With supporting policies from the government and the adoption of a more resilient operation strategy, the airline expects to start generating profit since 2023 and fully recover its accumulated losses by 2025.

In a Covid-19 ravaged year of 2020, the national flag carrier Vietnam Airlines posted a pre-tax profit of nearly VND11.1 trillion (US$482 million), significantly lower than the airline’s previous estimated loss of VND14.4 trillion (US$626.3 million) in last December.

A lower-than-expected loss came after the airline had completed procedures for depreciation adjustment and funds allocation for aircraft maintenance under the government’s support program, noted Vietnam Airlines in its recent 2020 consolidated financial statement.

As the aviation industry was among the hardest-hit sectors by the pandemic, Vietnam Airlines operated around 96,500 flights in 2020, down 48% year-on-year. This resulted in declines of 51% year-on-year in the number of passengers to 14.23 million and a fall of 47% in the amount of cargo for transportation at 195,000 tons.

For the next five years, Vietnam Airlines targets to resume its operation, while continuing to push for restructuring process by streamlining its organization structure and enhancing efficiency in performance, especially in the sale and leaseback (SLB) of aircraft.

Meanwhile, Vietnam Airlines is expected to divest part of its investment capital at businesses with high efficiency in the aviation industry to support the airline’s financial conditions.

With supporting policies from the government and the adoption of a more resilient operation strategy, the airline expects to start generating profit since 2023 and fully resolve its accumulated losses by 2025.

Under its resolution, the NA agreed to allow the State Bank of Vietnam (SBV), the country’s central bank, to provide refinancing loans worth VND12 trillion (US$518.57 million) for Vietnam Airlines to maintain its operation.

At the same time, Vietnam Airlines, in which the state currently holds an 86.19% stake via the Commission for State Capital Management (CSCM), gets the permission to sell additional shares of VND8 trillion (US$345.68 million) to existing shareholders to raise its registered capital. As such, the government would assign its investment arm State Capital Investment Corporation (SCIC) to buy Vietnam Airlines shares.

Hanoi (VNS/VNA) – Vietnamese railway companies reported large losses in 2020 due to the impacts of the COVID-19 pandemic.

Previously at the General Meeting of Shareholders in 2020, the company approved a plan for 2020 which expected total revenue to reach 1.63 trillion VND, and a loss up to 335.4 billion VND due to the influence of COVID-19.

The Saigon Railway Transport JSC (SRT) announced Q4 revenue of 282 billion VND, down by 22.5 percent year-on-year. It reported an after-tax loss of more than 105 billion VND.

The Vietnam Railway Corporation (VNR) also announced that its revenue in the first nine months of 2020 decreased 34.2 percent year-on-year, equivalent to a decrease of 1.18 trillion VND./.