The ministry had begun an investigation last September after Vietnamese sugar producers claimed they were hurt by the dumping of sugar imported from Thailand.

As many as 3,300 people lost their jobs with factories having to close. More than 93,200 farmers were affected.

The investigation found Thai sugar exporters had a dumping margin of 47.64 percent. In February, Vietnam had slapped preliminary anti-dumping and countervailing duty of 33.88 percent on sugar imported from Thailand. 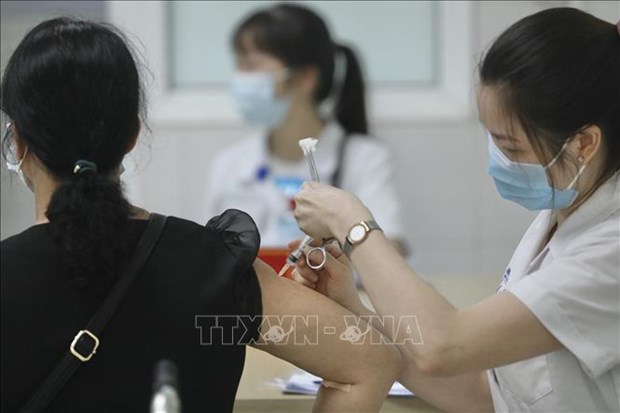 Sydney (VNA) – The Vietnamese community in Australia has raised funds in support of the fight against COVID-19 in their homeland.

The Vietnamese entrepreneurs’ club in Australia collected 430 million VND (18,570 USD) within one week to assist the combat.

Meanwhile, the Vietnamese students’ association said it has raised funds worth 17.5 million VND and will continue to call for donations from overseas Vietnamese in the time ahead.

Many Vietnamese citizens and associations have also directly sent their donations to Vietnam’s COVID-19 vaccine fund.

There were additional 155 COVID-12 cases in the past six hours to 6pm on June 16, 149 of them were found in quarantine and locked-down areas and the remaining were imported, reported the Health Ministry./. 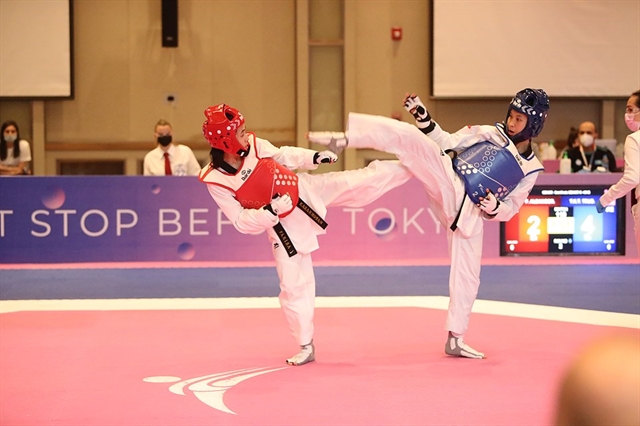 Trương Thị Kim Tuyền of Việt Nam (right) kicks out at Fariza Aldangorova of Kazakhstan during the semi-finals of the women’s U49kg category at the Asian Qualification Tournament for Tokyo Games in Amman, Jordan, on May 21. — Photo courtesy of World Taekwondo

Three years later, the fighter made it and has qualified for the Tokyo Games this summer, bringing Vietnamese taekwondo back onto the world’s biggest stage after nearly a decade.

In the Asian qualifiers last month, Tuyền, one of two Vietnamese representatives, defeated three rivals to become one of two finalists in the women’s 49kg category. It was enough for her to clinch an Olympic slot.

“I am really happy with this result. It’s deserving after my labour for many years. It is a big thanks to my coaches and friends who strongly support me,” said the 24-year-old.

Born in 1997 in the southern province of Vĩnh Long’s Long Hồ District, Tuyền has been practising taekwondo for 10 years.

Tuyền is the youngest in a four-member family that earns a living through rambutan and rice farming.

While all of her siblings, who are much older than her, have to work to help their parents, Tuyền was asked to focus on her studies.

One day when his youngest daughter said she wanted to try martial arts, her father Trương Văn Hạt agreed to the strange and expensive request.

Tuyền was encouraged to try taekwondo as her father believed that the protective gear would prevent his daughter from suffering injuries.

Her passion and talent made Tuyền, who has speed, strength, accuracy and a tactical mind, an outstanding trainee at her club.

After many years scouting for the provincial sports department, coach Lê Trần Thùy Trân understood that she had found a “treasure”.

“Her parents did not agree when I talked about bringing Tuyền to the province’s training centre to be a professional athlete. I told them Tuyền was a talent and she had potential to be a big athlete in the future,” Trân recalled.

“I had to come back again and again, persuading and analysing a lot before receiving their approval. It was great that she proved herself with a gold medal at the Mekong Delta regional championship and another at the national youth tournament in the first year,” she said.

The 14-year-old was immediately elevated to the national team which meant Trân had to go back to Hạt for permission again.

“It was not simple as at the provincial centre where she could return home at the weekend. Being a national team member means she would leave her parents and live an independent life,” said Trân who then sent Tuyền to Đà Nẵng’s National Sports Training Centre 3.

The day Tuyền left was the first time that both she and her parents saw an aeroplane at HCM City’s Tân Sơn Nhất Airport. But since then, flights have been part of her life with competitions around the world. 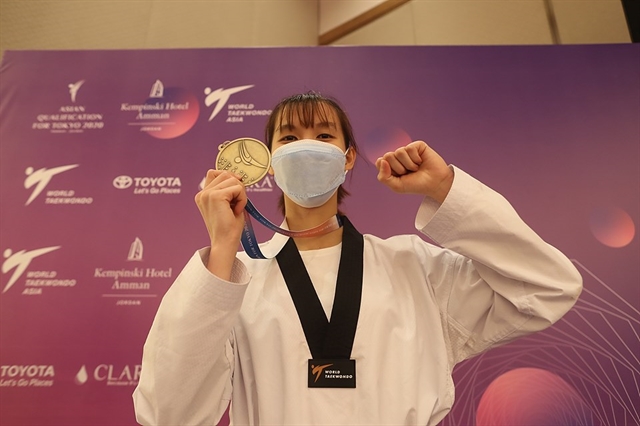 Trương Thị Kim Tuyền poses with her gold medal of the women’s U49kg category at the Asian Qualification Tournament for Tokyo Games in Amman, Jordan, on May 21. — Photo courtesy of World Taekwondo

Tears fell when Tuyền flew away but a bright future was waiting for her.

The unbeaten girl dominated not only the national tournament but also the Southeast Asian Games as she won the regional competition’s 46kg class in her debut in 2015 at the age of 18.

Months later she took an international title and was voted the best athlete at the Morocco Open which is one of the most prestigious events in taekwondo.

Her success left Tuyền self-satisfied. Five months after her triumph in Morocco, Tuyền was defeated in the semi-finals of the Olympics’ qualification Asian zone, meaning she missed out on a spot at the 2016 Rio Games, as only two fighters from the tournament qualified.

Fortunately, she used the loss to rebound in 2017 and brought home six medals from international competitions, including a silver from the world championship in South Korea.

The silver was a milestone point as the first world level medal in history for Vietnamese taekwondo .

In 2019, Tuyền grabbed titles from the ASEAN Open, Greece Open and Serbia Open. Her performance at the Grand Prix Moscow 2019 did not help put her in the top three but she showed her advanced technique before losing 11-9 to world champion Sim Jae-young who was born in South Korea, the centre of the taekwondo world.

According to Nguyễn Lê Dung, head of Vĩnh Long Sports and Culture Department’s Taekwondo Section, Tuyền is a star of the province and national sport and has more success ahead of her.

2020 saw most tournaments cancelled or postponed due to the COVID-19 pandemic. Tuyền could not enjoy her usual intensive training courses or international competitions. She feared missing the Olympics again as the Asian qualification event in Jordan in May was the last chance for Việt Nam.

But Tuyền performed spectacularly to be a finalist in her class to take an Olympic slot but also beat Su Po-ya of Chinese Taipei in the final to win gold.

It is her first time at the competition and Việt Nam’s fifth time sending a taekwondo athlete. 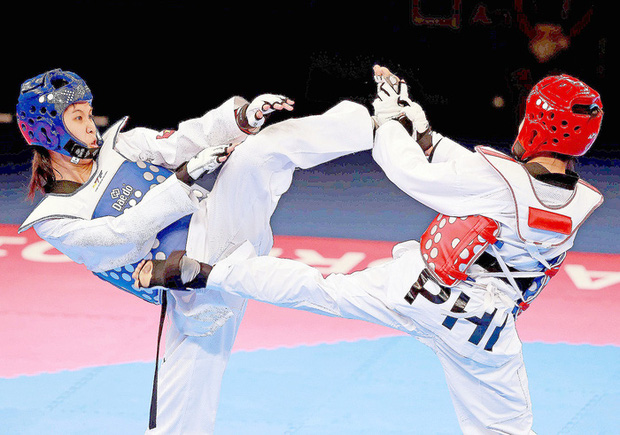 Trương Thị Kim Tuyền (left) is one of Việt Nam athletes at the coming Olympics. She will also a key athlete to participate at this winner SEA Games in Hà Nội. — Photo kenh14.vn

The world No 13 Tuyền is now in Lebanon for the Asian championship which will be her final test ahead of Tokyo in July.

Tuyền is hoped to bring Việt Nam another medal after her Trần Hiếu Ngân’s silver at the Sydney Olympics 21 years ago.

“The first SEA Games title strengthened my belief with the martial art. The world silver medal was the most memorable result as it was my first time at the worlds. The Olympic berth is my dream,” said Tuyền.

“As an athlete, everyone hopes to be an Olympian once in their life. Me too. I will work harder for that and even harder for a medal,” said Tuyền. — VNS 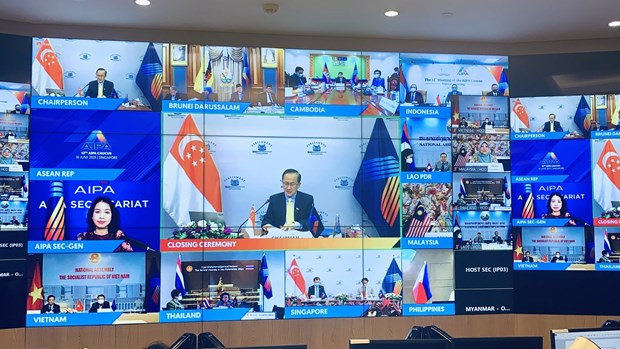 The Vietnamese delegation said amidst the COVID-19 pandemic, ASEAN should pay more attention to restoring supply chains and promoting trade connectivity in parallel with enhancing close cooperation to prevent the spread of the disease, especially cross-border transmission, accelerating COVID-19 vaccine purchase and vaccination, as well as cooperation in vaccine research and development.

The delegation proposed six specific recommendations to AIPA member parliaments, related to many crucial issues such as completing legal framework to facilitate trade and investment activities, ensuring uninterrupted circulation of goods and supply chains in the region. 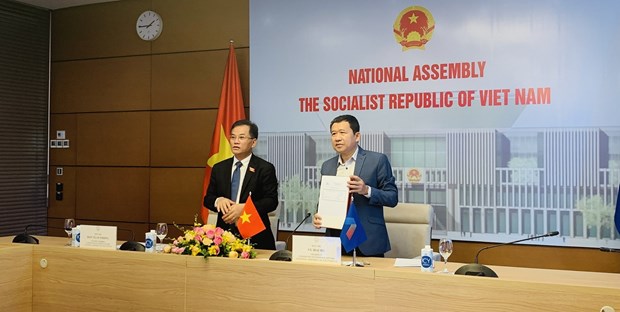 Vietnamese participants also underlined the need to strengthen  parliamentary supervision over the implementation of commitments on investment and trade within regional and international frameworks, establish new methods in promoting bilateral trade ties,  maintain commitments to opening market in order to enhance the resilience and sustainability of regional supply chains, speed up the application of digital technology in production and business activities and goods consumption through e-commerce platforms.

Representatives from AIPA member countries shared experience in controlling the pandemic and promoting economic recovery amidst the health crisis.

They demonstrated willingness to cooperate for economic growth recovery and green economic development, and realise sustainable development goals after the pandemic, for stability and prosperity of the ASEAN Community, and for the sake of regional people.

The AIPA Caucus was officially established at the 28th AIPA General Assembly in 2007 in Malaysia.

Since the first AIPA Caucus in Malaysia in April, 2009, the meeting has been held annually in ASEAN countries (except 2018). The National Assembly of Vietnam has been an active member of AIPA Caucus. The country successfully organized the fifth AIPA Caucus in 2013, which focused on green growth and poverty reduction for sustainable development in ASEAN./.

VNA
Three sisters in Thanh Hoa Province are in need of financial support for treatment after their parents died. Lang Thi Sao and Hoang Van Ket had three children together. Kiet’s health deteriorated but because of poverty, he didn’t want to go to the hospital. Kiet was shocked when he was diagnosed with AIDS. He said he didn’t know how he had the disease. He died one month after the diagnosis.

Sao and their youngest daughter, who is only 10 years old, also had AIDS. When Sao died in 2020, the family didn’t have any money so Sao’s cousins, Hoang Van Do, had to borrow money everywhere to hold a funeral for her.

Their eldest daughter, 18-year-old Hoang Thi Hang shoulders everything and looks after her sisters after the deaths of their parents. They are given a monthly allowance of VND450,000 (USD20) for orphaned children but they have to spend VND700,000 a month to buy medicines.

“We are all poor here so we can’t help them much,” Nhat, Hang’s neighbour said. “We often give them vegetables and rice. Hang also works part-time on the fields for some money.”

“Sometimes I felt like I might break down but I still have my sisters,” Hang said. “My youngest sister is struggling against the illness. She often coughs and cries when the weather changes. One of my sisters will learn Judo and I will go to college this year so I’m worried that there will be no one at home to take care of my youngest sister every day.”

Hang said she wanted to go to Hanoi National University of Education but has instead opted for the Primary Education Department at Hong Duc University in Thanh Hoa instead to look after her sister.

Do Viet Phuc, head of Truc Chuan 2 Village, said, “Hang’s family is a difficult case in our area. We also called for help for them but it’s not enough.”

If you can help please donate through: 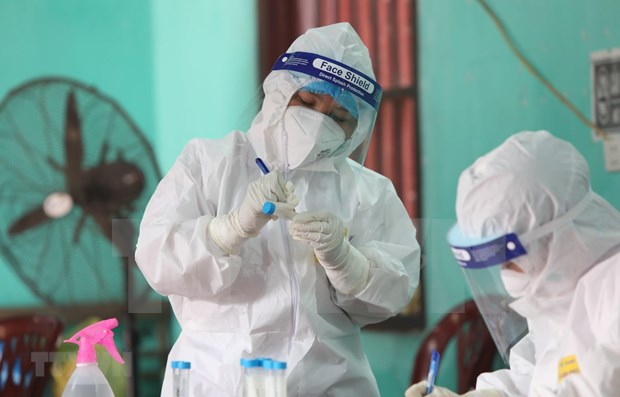 Hanoi (VNA) – Vietnam reported 21 new COVID-19 cases, all detected in quarantine areas, over the last six hours to 12:00pm on May 13, according to the Ministry of Health (MoH).

The new patients include seven in Bac Giang, four in Hung Yen, four in Thai Binh, three in Hanoi, and one each in Thua Thien-Hue, Ha Nam and Hoa Binh.

These raised the national count to 3,679, including 2,234 domestic infections and 1,445 imported cases. A total of 664 cases have been documented since the fourth COVID-19 wave hit Vietnam on April 27.