A mass coronavirus inoculation drive with over 800,000 AstraZeneca vaccine doses will be carried out in Ho Chi Minh City on Saturday at around 1,000 vaccination points, a high-ranking health official has said.

Deputy Minister of Health Nguyen Truong Son made the statement on Thursday when he joined the municipal Pasteur Institute to inspect the storage of 836,000 doses of AstraZeneca vaccine jabs having been allocated by the central government to the city.

These doses, developed by British-Swedish firm AstraZeneca and the University of Oxford, are among nearly one million shots of the vaccine the Japanese government donated to Vietnam on Wednesday.

This allocation reflected a priority the government and the National Vaccine Steering Board has given to the nine-million-strong city to help it expand the immunization coverage and thereby drive back the increasing COVID-19 spread, which has so far affected the entire southern city, Deputy Minister Son said.

The vaccine doses underwent required tests lasting for 48 hours at the Vaccine Testing Institute for safety certification before use, the deputy minister said.

The vaccination drive is expected to start on Saturday at 1,000 points of inoculation citywide and will last for five or seven days, making it the largest-ever mass COVID-19 immunization in the city.

The inoculation will be intended for priority subjects designated by the government and others including essential service providers, teachers, health workers, people working at administrative agencies, people over 65 years old, and workers at industrial parks and export processing zones.

Each point will vaccinate 200 people per day, which means a total of 200,000 people can receive injections per day.

City authorities have drawn up a plan to mobilize all possible health workers and facilities for the mass inoculation, the deputy minister said, adding that lists of vaccination must be made available within Friday.

“It is a principle that this mass immunization is conducted quickly but must ensure absolute safety for vaccinated people,” Son requested.

Ho Chi Minh City health authorities recently reported that around 11,000 locals have been vaccinated since June 3, bringing the total number of inoculated people to about 84,000 since the city began its immunization program on March 8.

Nationwide, nearly two million vaccine shots had been administered and 90,000 people had received the full two doses by Thursday, according to the health ministry’s data.

The ministry confirmed 121 new coronavirus cases at noon on Friday, including 119 domestic and two imported cases, of which 59 were detected Ho Chi Minh City.

The new cases have taken the Southeast Asian country’s tally of patients to 12,352, including 62 deaths, since early 2020.

Since April 27, when the pandemic’s fourth wave appeared in Vietnam, the country has documented 9,114 domestic infections.

Health authorities recorded almost 150 locally-transmitted coronavirus infections in Ho Chi Minh City on Friday, as Vietnam has been struggling with the fourth transmission wave – and the worst so far – since late April.

One hundred and forty-nine cases were detected in the community, the municipal Center for Disease Control (HCDC) said in a report.

This is the biggest-ever daily case increase the city has reported since the virus first emerged in the country early last year.

The patients were related to about 20 transmission chains, with a dozen cases showing no clear source of infection.

The southern economic hub has found 1,346 community cases since April 27, when the fourth virus wave broke out in Vietnam.

The pathogen is silently spreading in the community so everyone should adhere to social distancing rules, reinstated on May 31, and limit unnecessary interactions, the HCDC said.

Those finding that they are at risk of infection should immediately contact local medical providers for help, it added.

A total of 232 cases were logged in quarantined or isolated areas, the ministry noted, adding 80 recoveries were recorded the same day.

Vietnam has registered 9,173 domestic infections in this wave, 1,840 of which has been found since Monday.

The Southeast Asian nation has reported an aggregate of 12,414 patients, including 10,742 local and 1,672 imported cases.

The number of recovered patients stands at 4,733 while 62 have died, most having suffered critical underlying conditions.

Nearly two million AstraZeneca vaccine shots had been administered and almost 90,000 people had been fully inoculated by Thursday, according to the health ministry’s data. 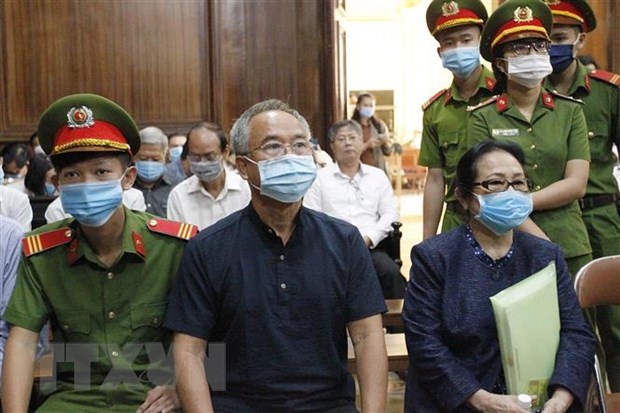 HCM City (VNA) – The People’s Court of Ho Chi Minh City on June 17 announced that the second hearing for the case of law violation involving the land lot at 57 Cao Thang street being exchanged for the land lot at 185 Hai Ba Trung street in the city will take place from July 13-19.

The hearing, which was scheduled for May 26 to June 2, was delayed to June 22 due to the COVID-19 pandemic. However, social distancing measures are being applied in HCM City until the end of June, forcing the trial to be suspended again.

In this case, Duong Thi Bach Diep, Director of the Diep Bach Duong Real Estate Co., is among the key defendants in the trial, and is charged with “fraud, appropriation of assets”.

According to the indictment, the 185 Hai Ba Trung land lot, owned by the State, was the headquarters of the Light Music Centre under the municipal Department of Culture, Sports and Tourism. In 2007, the centre’s then director Vy Nhat Tao contacted Diep to cooperate in upgrading the headquarters.

The property swap was approved by Nguyen Thanh Tai. During the process, Diep used the land use right certificate for 57 Cao Thang as collateral to borrow money from Agribank – HCM City branch.

After being granted a land right use certificate for the property at 185 Hai Ba Trung, however, Diep did not use it to replace the collateral at Agribank to hand over the property at 57 Cao Thang to the Light Music Centre as committed. Instead, Diep used the 185 Hai Ba Trung land lot as collateral for a loan at Southern Bank (now Sacombank) and so far was not able to repay the debt.

On March 5, 2010, Tai signed a document sent to relevant units approving the exchange of the two land lots, without any request to check and clarify the legal status of the 57 Cao Thang land lot, causing losses of State assets .

The other defendants showed a lack of responsibility in carrying out their duty, thus facilitating Diep’s fraud and appropriation of assets.

The People’s Court of Ho Chi Minh City on March 26 decided to return dossiers of the case for further investigations as new evidence and details were found./. 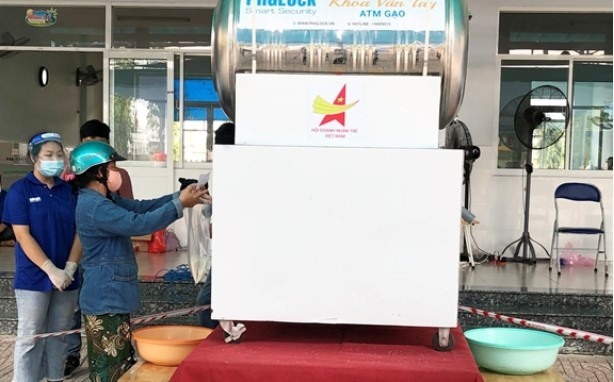 A free rice dispensing machine for poor people and those out of work is installed at a kindergarten in district 12’s Thanh Loc ward, which is under lockdown. (Photo laodong.vn)

HCM City (VNS/VNA) – Ho Chi Minh City is set to offer a second financial relief package for businesses and workers affected by the COVID-19 pandemic, according to its Department of Labour , Invalids and Social Affairs.

Tourism, transport and small and medium-sized businesses, teachers, laid-off workers, and informal sector workers will be beneficiaries of payments that will be made between this month and December.

Le Minh Tan, director of the department, said it was working with authorities in the city’s 21 districts and Thu Duc city to compile a list of affected businesses and laid-off and informal sector workers who are eligible to receive the payments.

The department proposes to pay workers who were laid off for at least a month due to the pandemic monthly relief payments of 1.8 million VND (78 USD), Tan said.

More than 600 workers placed under quarantine at the VINA Kitchen Ware JSC at the Tan Binh Industrial Park in HCM City on June 1 received essential goods and food for free from the Trade Union of the industrial parks and export processing zones.

They are quarantined after coming into close contact with COVID-19 patients.

Huynh Van Tuan, Chairman of the Trade Union, said the workers got minimum wages and other support in quarantine.

A free rice dispensing machine for poor people and those out of work has been installed at a kindergarten in district 12’s Thanh Loc ward, which is under lockdown.

Disadvantaged people could get free rice and essential goods from a store set up next to the machine, Nguyen Duc Vinh, Secretary of the Thanh Loc Ward Youth Union, said.

Some three to four tonnes of vegetables transported from Lam Dong province are delivered to people quarantined in the Thanh Loc ward every three or four days./.

The city wants the Metro 4b line, which is in the process of project documentation, to eventually connect all three terminals of the Tan Son Nhat International Airport in HCMC and runs to Long Thanh being built in its neighboring province of Dong Nai.

The proposal for the metro link between the airports is contained in a proposal the city made for the national railway development plan for the next decade with vision until 2050.

The proposed route will also boost connectivity between the two localities and Thu Duc City, the new city within HCMC, the proposal says.

Under the current plan, Metro 4b will run underground with three stations for a total length of 3.2 kilometers, connecting the Gia Dinh Park in Phu Nhuan District with Lang Cha Ca intersection south of Tan Son Nhat in Tan Binh District.

Construction of the VND109 trillion ($4.6 billion) first phase of Long Thanh International Airport began earlier this year. The first phase is set to be completed by 2025, giving the new airport a capacity of 25 million passengers a year.

The meeting was chaired by Deputy Prime Minister Vu Duc Dam, who is also head of the steering committee.

The standing board agreed on specific instructions to create favourable conditions for local authorities and businesses to access and purchase vaccines and quickly transport them to Vietnam.

The Health Ministry will work with authorized suppliers and Ho Chi Minh City’s administration on the city’s needs for vaccines.

Localities and businesses must be cautious when seeking vaccines to avoid the case when the manufacturer commits to selling them but deliver in 2022, not in this year.

The standing board urged the Health Ministry to early issue a document on extending the groups prioritized to receive vaccination, while preparing for launching the free-of-charge expanded vaccination drive and on-demand paid vaccination service after completing inoculation for priority groups.

Participants agreed to create the best possible conditions for the trial of homegrown vaccine. If the trial goes well, in the context of vaccine scarcity the Ministry of Health will submit to competent agencies for approval for use homegrown vaccines in emergency circumstances.

The Ministry of Health will coordinate with ministries and sectors to submit to the Government a proposal on accessing all vaccine supply sources in the world towards the goal of achieving herd immunity by the end of 2021, and create mechanisms to facilitate investors’ investment in the production of vaccines in the country to serve not only domestic use but also export.

The health ministry reported that in the coming time, along with Pfizer vaccine already bought, Vietnam is expected to receive a number of vaccines that have been approved for emergency circulation by the World Health Organisation.