In recent years, Vietnamese music lovers have witnessed the birth of many works combining traditional and modern music. 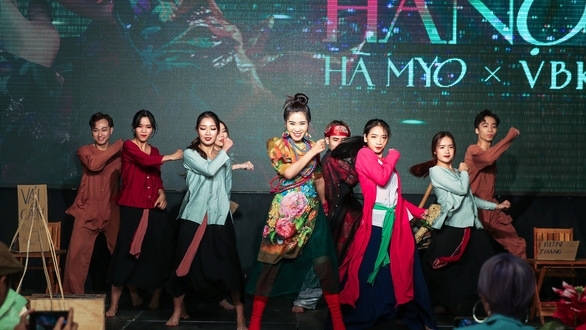 This is the first time the traditional Xam art of song was perfectly combined with rap and electronic music and modern choreography, creating a new music product bearing the charm and beauty of folk culture while featuring the freshness of the modern arts.

The video “Xam Hanoi” has rapidly received a warm response from a large number of young music listeners after arrived in the digital environment. This is on example highlighting the “connection” between modern and traditional music.

Young artist Ngo Hong Quang is also a remarkable face possessesing many works that exploit the rich traditions of music from around the country. He has finished an album entitled “Tinh dan” featuring many indigenous music styles of Vietnam.

Earlier, singers such as Hoang Thuy Linh and Bich Phuong also made their marks with pop songs imbued with folk music or inspired by traditional culture. It can be seen that this feature of traditional music in composition has become a trend for many young artists over recent years, contributing to a new wind affecting contemporary musical life.

This composition trend is considered a rope connecting modern music lovers with traditional music. It has not only brought about a new style but also highlighted Vietnamese identities in contemporary music.

The play was an audacious experience as the familiar Cai Luong ancient songs were added to a background of jazz music and featured the appearance of rap music in some scenes. All have created an interesting “opening” for Cai Luong that is not only admired young people but has also surprised veteran artists.

The newly released play “Son Hau – Beyond The Mountain” by young directors Nguyen Quoc Hoang Anh and Ha Nguyen Long has also rejuvenated the ancient art of Tuong (classical drama) through attractive performances of hip hop dance on a background of electronic sounds.

This exploitation of modern music is a way to bring traditional arts and music closer to young audiences as well as preserving and promoting traditional music values that are at risk of degradation over times.

Obviously, the reciprocal combination of modern and traditional elements in music has not only made both art forms newer and more impressive but also opened potential trends for the future, towards a new world of contemporary arts imbued with national identities.

This is also a way for Vietnamese music to define itself among international friends. This mission belongs to both traditional and modern artists.

However, it is not an easy “path” for artists who have a great passion for the arts and who also dare to deviate. Because, in fact, not any old combination creates the right “fit”. An inappropriate mix of modern and traditional elements can make art works rude and objectionable.

The unreasonable exploitation of ancient materials can also easily cause distortions of tradition. Creators must thus have a deep understanding of each art form so that they will not blur one another.

The successes of various art works using this combination in recent years was in part due to the participation of experts having strengths in each form.

With an in-depth understanding of each field, they support and adjust together, helping the works avoid crossing the delicate line between creativity and objection. Thereby, they will enhance the value of the country’s music in particular and the arts in general.

The Hanoitimes – The ritual is taking place under the exhibition which will last until November 23.

The Water God worshiping ceremony of the Ede people, part of the exhibition entitled “Travel Through Vietnamese Heritage Regions 2020,” is being held at the Vietnam Culture and Arts Exhibition Center, Hanoi.

The ritual ceremony is usually organized by Ede ethnic minority in Ninh Tay commune, Khanh Hoa province in January, aiming at giving thanks to the Water God for bringing luck, good weather, bumper crops and good health to the villagers.

The ceremony will be performed by the Ede ethnic people from Buon Dung village so as to introduce this cultural heritage more vividly.

Although it is only presented in the theatrical form and summarized in approximately 60 minutes, the Water God worship ceremony of the Ede ethnic group in Hanoi encompasses the full basic rituals, from the preparation of the ceremony, the worship part, to the festival with typical dances.

Normally, the ceremony is performed by the village head or shaman. The prepared worship dishes include pork, chicken, and most importantly, a pot of diluted bird’s blood. On that day, the wharf was decorated with a welcoming gate made of leaves, long-leaved grass, hanging decorations, and a pillar. After the worship procession at the wharf, the villagers will store some water in jars of dried gourds, put them in baskets, and take them home as gifts from the God of Water. Meanwhile, a group of people follow the shaman to visit all the houses in the village to spray poultry blood while singing songs out loud to pray good luck and fortune to the villagers.

After this ritual part, the villagers will join together at the community house to have a party with lot of rice wine and food in the joyful melody of gongs and festive vibes.

Oxfam today called for a package of nearly $160 billion in immediate debt cancellation and aid to fund a Global Public Health Plan and Emergency Response and help prevent millions of deaths as a result of the coronavirus.The five-point plan of this Global Public Health Plan and Emergency Response would enable poor countries to take action to prevent the spread of the disease and build up the capacity of health systems to care for those affected.

The pandemic has caused widespread suffering in rich countries, overwhelming some of the best healthcare systems in the world. However, with the disease now spreading to many poor countries where high levels of poverty and inequality threaten to accelerate the disease, the public health challenges are even greater. Nearly three billion people across the developing world do not have access to clean water, while millions more do not have access to adequate healthcare and live in crowded slums or refugee camps where social isolation is impossible. As women make up 70 per cent of health workers and carry out most unpaid care work, it will hit them the hardest.

Jose Maria Vera, Oxfam International Interim executive director, said that in Mali there are three ventilators per million people. In Zambia, there is one doctor for 10,000 people. “We know from Oxfam’s experience of fighting Ebola that with rapid action, this disease can be stalled and its catastrophic impact stopped. But we must act now and, on a scale never seen before,” he said. “Without urgent, ambitious, and historic action, we could easily see the biggest humanitarian crisis since World War II.”

The Imperial College London estimates that in the absence of intervention, the coronavirus could have led to 40 million deaths in the coming year. Oxfam calculates that doubling the health spending of the 85 poorest countries, home to nearly half of the world’s population, would cost $159.5 billion. This is less than 10 per cent of the US fiscal stimulus to fight coronavirus. While some donor institutions have begun to increase funding, the scale is not anywhere near the immense size of the challenge.

Oxfam is working with local partners, ministries of heath, and key UN agencies in 65 countries to respond to the crisis and help save lives. In Cox’s Bazaar, Bangladesh where over 855,000 Rohingya are living in makeshift camps, Oxfam is already scaling up preventive measures like soap distribution and handwashing stations at communal facilities to help 70,000 refugees. In Zaatari camp, Jordan – the largest Syrian refugee camp in the world – Oxfam has already started teaching hygiene and hand washing awareness for 2,000 children and aims to reach 78,000 people with water, hygiene,and sanitation. In Burkina Faso, which holds a population of 780,000 internally displaced persons (IDP), Oxfam is currently working in some of the largest IDP areas ensuring that both host communities and displaced people have access to safe, clean water. To meet the desperate humanitarian need now emerging, all governments must step up and fully fund the UN Global Humanitarian Response plan.

Oxfam is calling for the G20 and other national governments to tackle the virus head on by agreeing on an ambitious Global Public Health Plan and Emergency Response. The five-point plan calls for:

Vera added “It is understandable that national leaders are focused on helping their own citizens, but G20 leaders must also find the space for supporting poor nations too. We can only beat this pandemic if we act in solidarity with every country and for every person. No one is safe until we are all safe.”

In the spirit of global and regional solidarity, co-operation, and co-ordination, affirming Vietnam’s determination and commitment to combating COVID-19, the Vietnamese government offers $200,000 in medical aid to help Laos and Cambodia fight the coronavirus.