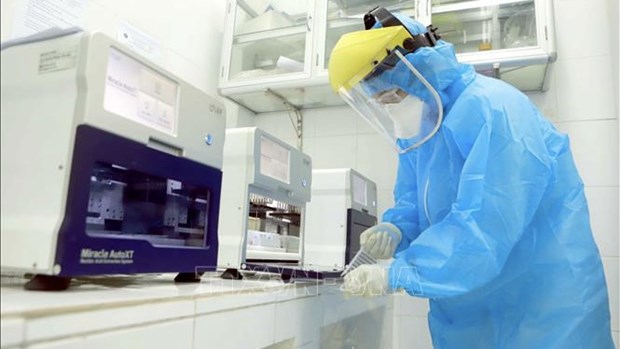 Of the new local cases, 61 were found in Bac Giang, 19 in Ho Chi Minh City, nine in Bac Ninh and two in Ha Tinh.

So far, Vietnam has logged 9,657 domestic infections and 1,647 imported cases. The number of COVID-19 cases since April 27, when the latest outbreak began, amounted to 8,087.

The ministry said 4,543 patients have been given the all-clear from coronavirus SARS-CoV-2 so far. The death toll was 61.

Among active patients undergoing treatment in hospitals, 343 have tested negative for SARS-CoV-2 once, 99 twice and 55 thrice.

Twenty-four provinces that were hit by the pandemic have gone through 14 days without new infections.

On June 15, an additional 95,421 people were vaccinated against COVID-19. Nearly 1.6 million doses of COVID-19 vaccines have been injected to date. The number of people fully got two shots was 63,636.

Deputy Prime Minister Vu Duc Dam has agreed with the proposal of the People’s Committee of Ho Chi Minh City on purchasing and importing COVID-19 vaccines, saying that the Government will create favourable conditions for the city’s plan, towards ensuring enough vaccines for local peoples./.

A health worker in charge of collecting residents’ samples for COVID-19 testing in Ho Chi Minh City has tested positive for the novel coronavirus.

She had been admitted to the hospital for COVID-19 treatment in Cu Chi District earlier the same day.

From June 2 to 14, the health worker was sent to COVID-19 hot spots in Binh Tan District at least 15 times to collect residents’ samples for coronavirus testing.

She previously tested negative for the novel coronavirus on June 9 but retested positive on Tuesday.

The woman did not experience any symptom prior to her test result.

Initial epidemiological investigation showed that six people including family members and colleagues had come into close contact with the health worker.

More than 3,000 health workers have been tasked with collecting citizens’ samples for COVID-19 testing, according to Tang Chi Thuong, deputy director of the Ho Chi Minh City Department of Health.

They include doctors, nurses, and technicians of 48 public hospitals and more than 500 students of the University of Medicine Pham Ngoc Thach.

Vietnam has documented 11,480 COVID-19 cases as of Wednesday afternoon, with 4,543 recoveries and 61 deaths, according to the Ministry of Health.

The country has recorded 8,262 local infections in 40 provinces and cities since the fourth wave of transmissions started on April 27, including 1,015 cases in Ho Chi Minh City.

A source close to Tuoi Tre (Youth) newspaper confirmed on Wednesday morning that the COVID-19 case is a nursing staff at the neurology department of the University Medical Center in District 5.

Her husband first tested positive for the novel coronavirus on Tuesday for having such symptoms as a fever and coughing.

The two patients have been admitted to the hospital for COVID-19 treatment in Can Gio District.

A total of 336 people including all employees of the neurology department and those who came into close contact with the nurse have tested negative for COVID-19.

The infirmary will also conduct COVID-19 tests on 510 inpatients.

It stopped receiving new patients from Wednesday, while the neurology department has been locked down.

The Pasteur Institute and Ho Chi Minh City Center for Disease Control are scheduled to evaluate the risk at the hospital on Wednesday before making a report to the Ministry of Health.

The University Medical Center, under the management of the health ministry, is one of the most crowded hospitals in the southern city, receiving about 5,000 patients per day.

On Sunday, the Hospital for Tropical Diseases, one of the city’s COVID-19 treatment facilities, began to be isolated for a week after scores of employees contracted the novel coronavirus.

Sixty fully vaccinated staff members of the hospital have been confirmed as coronavirus patients as of Wednesday afternoon.

HCMC – The Ministry of Health this afternoon, June 16, reported 176 new Covid-19 cases, with 174 of them locally infected in five localities and two imported into Tay Ninh Province.

Among the local cases, 128 were recorded in Bac Giang, 35 in HCMC, eight in Bac Ninh, two in Ha Tinh and one in Nghe An.

Six cases in HCMC were linked to the HCMC Hospital for Tropical Diseases infection cluster and 29 others came into close contact with earlier confirmed cases.

As for the case in Nghe An Province, who is a bank employee in Vinh City, the source of his infection remains unknown.

The Vinh City and Cua Dong general hospitals, which the man had visited, have stopped receiving outpatients. All employees of the two hospitals have also been tested.

Duong Dinh Chinh, director of the Nghe An Department of Health, said it had accelerated the tracing and testing of those in close contact with the man, the second Covid-19 case in Vinh.

On June 9, he came to the Vinh City General Hospital for a medical checkup. After making a health declaration, he entered the hospital as he neither showed Covid-19 symptoms nor visited pandemic-hit areas earlier.

Two days later, he visited the Cua Dong General Hospital and underwent a Covid-19 test. The result came back positive.

In related news, as a worker of a company in the Amata Industrial Park in Dong Nai Province tested positive for Covid-19, the municipal government today approved the Dong Nai Industrial Zones Authority’s proposal to ask three enterprises to arrange for their workers to stay at the factories after work.

These enterprises have a large number of employees each.

The arrangement of workers to stay at the factories must be agreed by the workers and the enterprises’ labor unions.

The province also asked these enterprises to coordinate with the healthcare sector to conduct Covid-19 tests for employees and only those with the negative result will be arranged to stay at the factories. The enterprises must pay for the testing costs.

Moreover, 61 direct contacts of the patient in the Amata Industrial Park have tested negative once.

A street vendor selling beverages in front of the Children’s Hospital 1 in District 10, Ho Chi Minh City has tested positive for the novel coronavirus after her daughter and son-in-law caught the disease.

T.T.N., living in District 11, was taken to the district’s hospital by her husband at 9:00 am on June 13 after running a fever on June 9 and taking medication at home, followed by a sore throat and loss of appetite on June 12.

N., 48, was isolated in the emergency screening room upon her admission to the hospital and tested for COVID-19.

Both the results of her rapid and real-time RT-PCR tests returned positive for the pathogen.

The District 11 Hospital temporarily stopped accepting patients into the emergency screening room and disinfected the entire area of this ward whereas N. was transferred to Cu Chi Field Hospital on June 13 for quarantine and treatment.

According to the hospital, there were nine people, including the beverage vendor, in the emergency screening room at the time of her arrival.

All medical staff in the room were wearing full protective gear, while other patients and their relatives were masked and did not come into direct contact with N.

She sold coffee in front of gate No. 6 of the Children’s Hospital 1, according to an epidemiological investigation.

Previously, N.’s daughter and son-in-law had been confirmed as COVID-19 patients and were sent to Cu Chi Field Hospital for treatment on June 12.

She last had contact with her daughter and son-in-law on June 8 before suspending her street-vending business from June 9.

Ho Chi Minh City authorities decided on Monday to extend the enhanced social distancing measures implemented since May 31 by two weeks given an escalation in transmissions.

From April 27 to Wednesday morning, the city has recorded 980 local cases of COVID-19, making it the locality with the third-highest number of infections in Vietnam, after Bac Giang with 4,462 patients and Bac Ninh with 1,424.

These infections are among the total caseload of 8,088 recorded in 40 of Vietnam’s 63 provinces and cities in this ongoing virus wave — the fourth and the worst since the pathogen first hit the country on January 23, 2020.

The nation has documented an accumulation of 11,304 patients, including 9,657 domestic and 1,647 imported cases ever since.

Recoveries have reached 4,543 while 61 patients have died, mostly with critical underlying medical conditions like cancer and chronic renal failure. 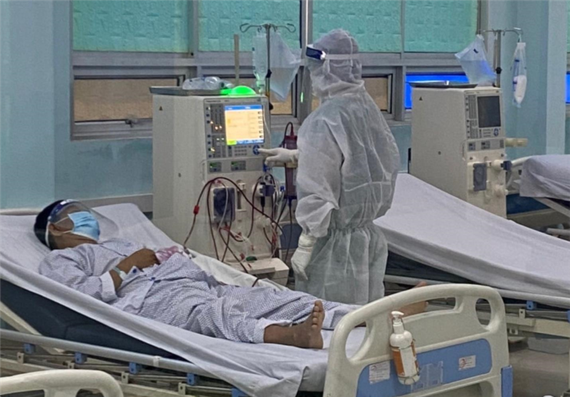 The infirmary has conducted the first hemodialysis on Covid-19 patients

The infirmary has conducted the first hemodialysis on Covid-19 patients. In addition, the Covid-19 Treatment Unit of Pham Ngoc Thach Hospital has received 10 cases of Covid-19 with respiratory failure transferred from Covid-19 Can Gio.

In its document, the People’s Committee of Ho Chi Minh City requested districts each to have concentrated isolation areas have a minimum capacity of 200 beds and Thu Duc City with 600 beds. Two people are residing in one room with partitions between them in the quarantine camps.
City authorities also asked local administrations to supervise the implementation of Covid-19 prevention tasks in isolation areas. Leaders in districts will be held accountable if violations occur.
The Department of Health of Ho Chi Minh City also proposed the establishment of concentrated medical isolation areas at hotels that are voluntarily paid by Covid-19 patients.
The municipal People’s Committee has approved the use of student dormitories of Ton Duc Thang University, University of Technology, and Saigon University as centralized isolation areas.
According to the People’s Committee of Ho Chi Minh City, the development of the Covid-19 epidemic is complicated with many chains of infection, from different infection sources plus new, fast-spreading coronavirus variants. Student dormitories will be used when the city records 500-1,000 cases of Covid-19 infections.