Da Lat-bound holiday makers from Ho Chi Minh City spent more than 17 hours on their vehicles but still failed to reach the capital city of Lam Dong Province in the Central Highlands region due to a nightmare traffic jam on Bao Loc Pass on Friday.

It normally takes a maximum of seven hours to travel from Ho Chi Minh City to Da Lat by car.

But vacationers, who left Ho Chi Minh City late on Thursday evening and spent their night on cars or sleeper buses with a hope to wake up in the cool, relaxing air of Da Lat the next morning, had still found themselves amidst the stuffy atmosphere of traffic congestion as of Friday afternoon.

Traffic congestion occured on National Highway 20, especially on Chuoi Pass and Bao Loc Pass which administratively belong to Lam Dong, on Thursday night and lingered until late on Friday afternoon, with droves of vehicles moving at a snail’s pace on the major route to Da Lat.

According to traffic police officers of Lam Dong, the traffic pressure concentrated not only on these two mountain passes but also at Dau Giay intersection in southern Dong Nai Province, about 100 kilometers away.

“It’s terrible,” Nhat Linh, a Thua Thien-Hue native who boarded a passenger bus from Ho Chi Minh City to Da Lat from 11:00 pm Thursday, said in the middle of his way at 4:00 pm on Friday.

“The vehicles stayed still for most of the time and only moved slowly at a speed of five to 30 kilometers per hour for the rest.

“Never have I seen traffic jams last that long.

“The traffic jam made me want to go home.”

“It was only jammed in the direction from Ho Chi Minh City to Da Lat due to the high volume of vehicles,” said Truong Ngoc Hanh Dung, a traveler in the opposite direction.

“Some drivers are impatient, thus making the traffic jam even more serious,” she added.

As an experienced long-distance traveler, Dung believed that the high demand for traveling, including both abroad and domestic, which has long been held back by the COVID-19 pandemic prompted abnormal large numbers of visitors to Da Lat, where offers pleasant weather — an ideal escape from the heat in urban areas.

Further, most workers in Vietnam have four days off during the public holiday to celebrate the Reunification Day (April 30) and the International Workers’ Day (May 1) .

To help release the traffic volume on National Highway 20, more than 100 police officers of Lam Dong Province and Da Huoai District were mobilized to the scene to direct the vehicles, steering them to the alternative route through the provincial road 721 past Da Teh District and Con O Pass to Da Lat.

This is a poorly-known route but with a guaranteed road quality, and can be used as a backup for Bao Loc Pass.

The Department of Transport of Lam Dong has also banned buses with more than 16 seats from traveling on Prenn Pass and restricted them on Mimosa Pass from 10:00 am Friday through May 3.

By the end of Friday afternoon, vehicles had been able to slowly move out of National Highway 20 and Bao Loc Pass. 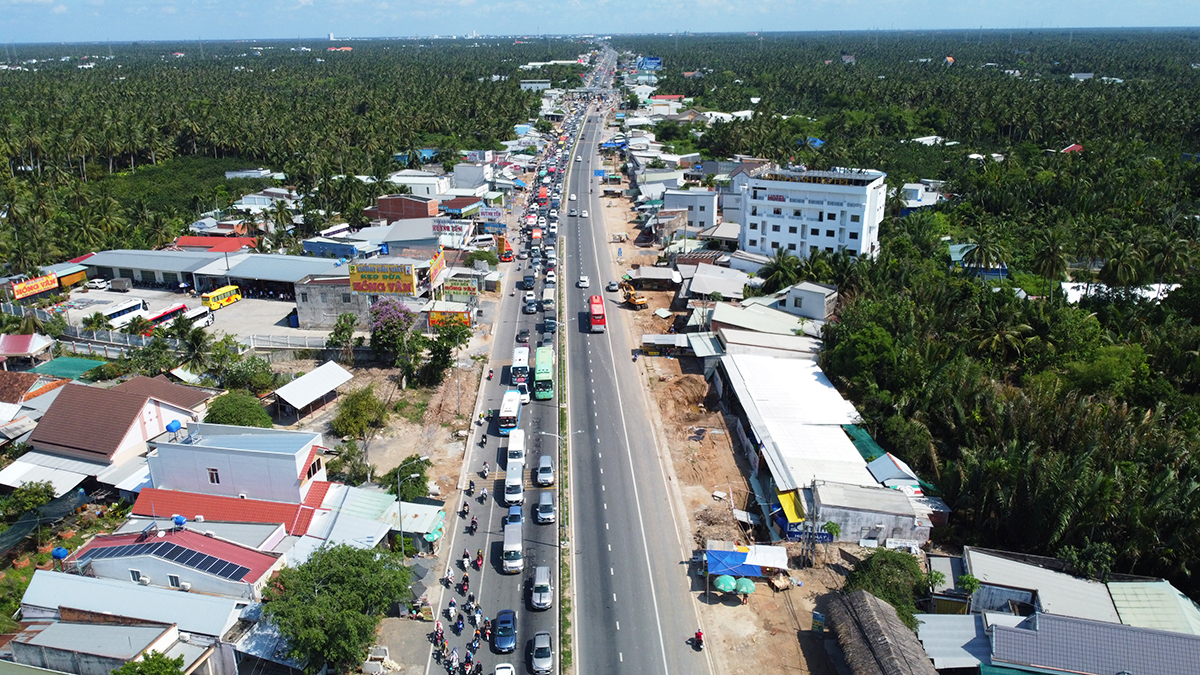 As the end of the four-day Reunification Day and International Workers’ Day holiday approaches, people from the Mekong Delta are returning to HCMC for work, causing an influx of traffic on national highways 60 and 1.

At around 2 p.m. Sunday, the area near the toll station at Rach Mieu Bridge experienced traffic jams that spanned nearly a kilometer. But Ha Ngoc Nam, deputy director of the Rach Mieu Bridge Build-operate-transfer (BOT) company, said the situation was under control. 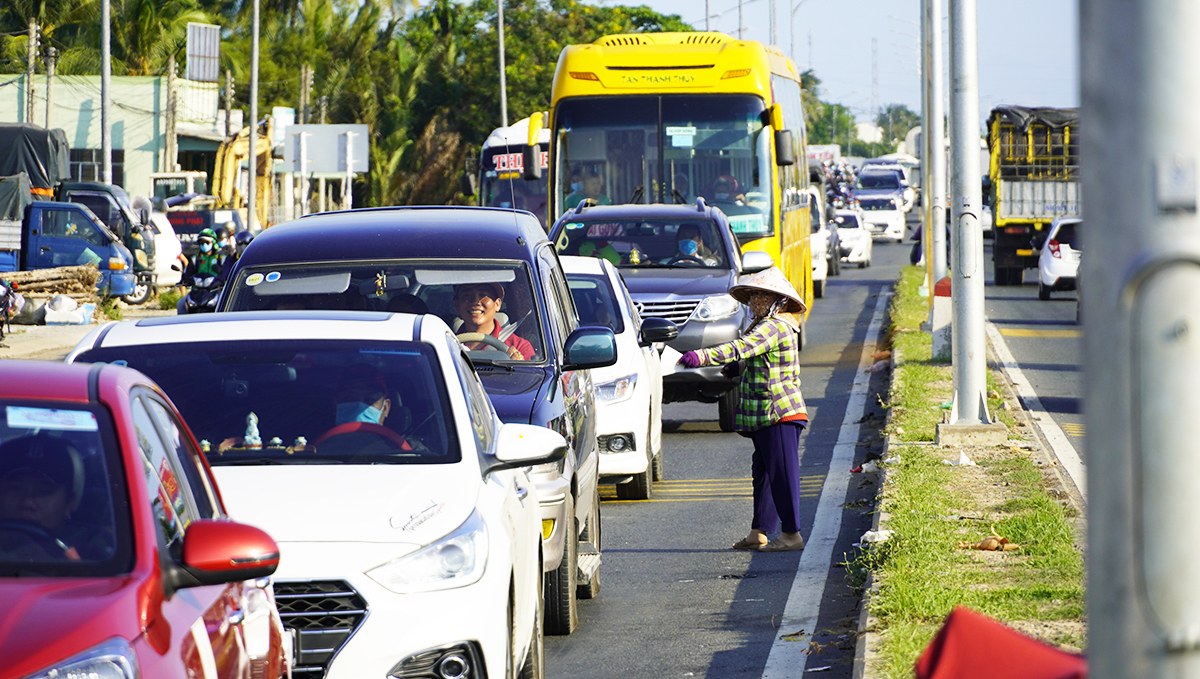 Cars line up as they await their turn to cross the bridge. Amid the congestion, vendors crossed onto the road to serve prospective customers. 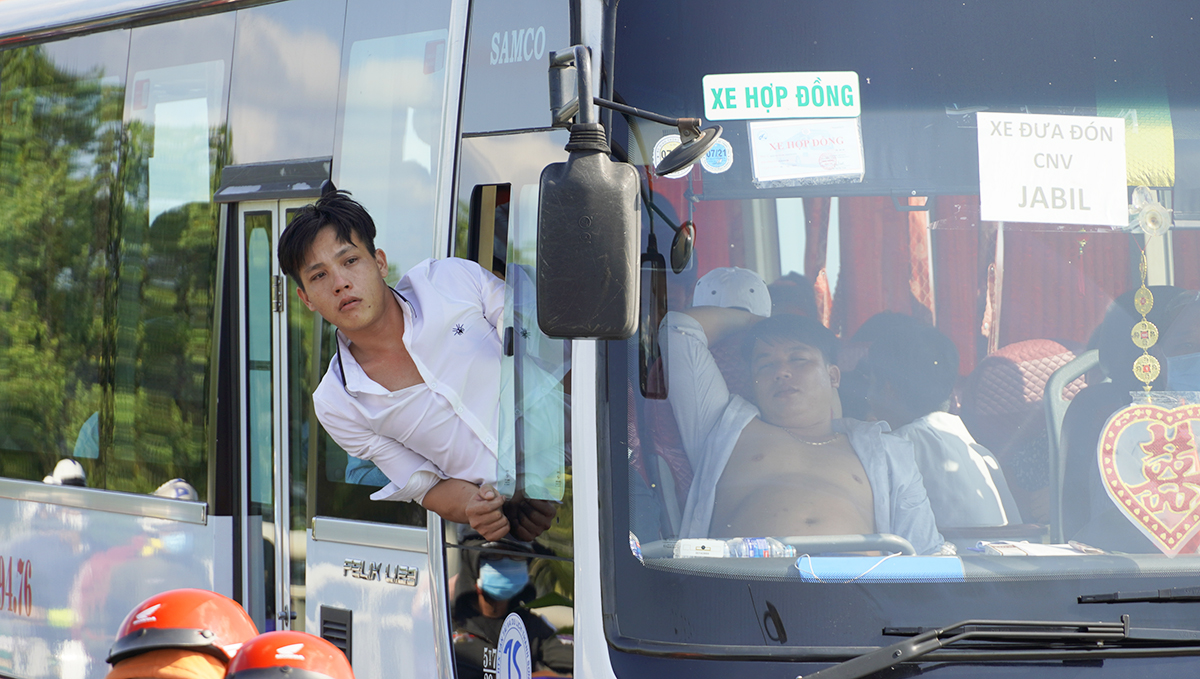 A bus employee looks out the window to find a way out of the traffic jam as a passenger next to him sleeps through the turmoil. 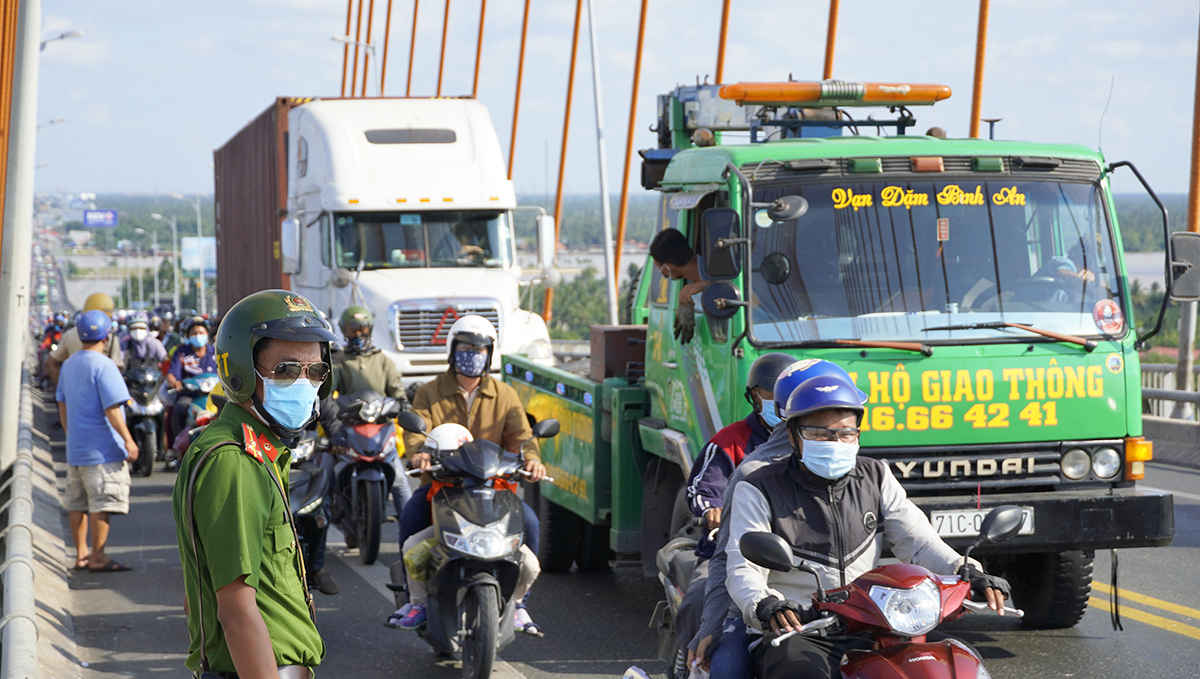 At around 3:30 p.m., a container truck saw its engine die in the middle of the road, paralyzing traffic. Police were then dispatched to help the truck cross the bridge.

Rach Mieu Bridge, spanning over 8.3 kilometers, was launched in 2009. In the past several years, the bridge has become a frequent “traffic bottleneck” as the large number of vehicles crossing it from the southern provinces of Tra Vinh and Vinh Long often greatly exceeds its intended capacity.

At the same time, several passengers trying to return to HCMC through the National Highway 1 decided to rest by the road near My Tho City for a drink amid the hot weather. 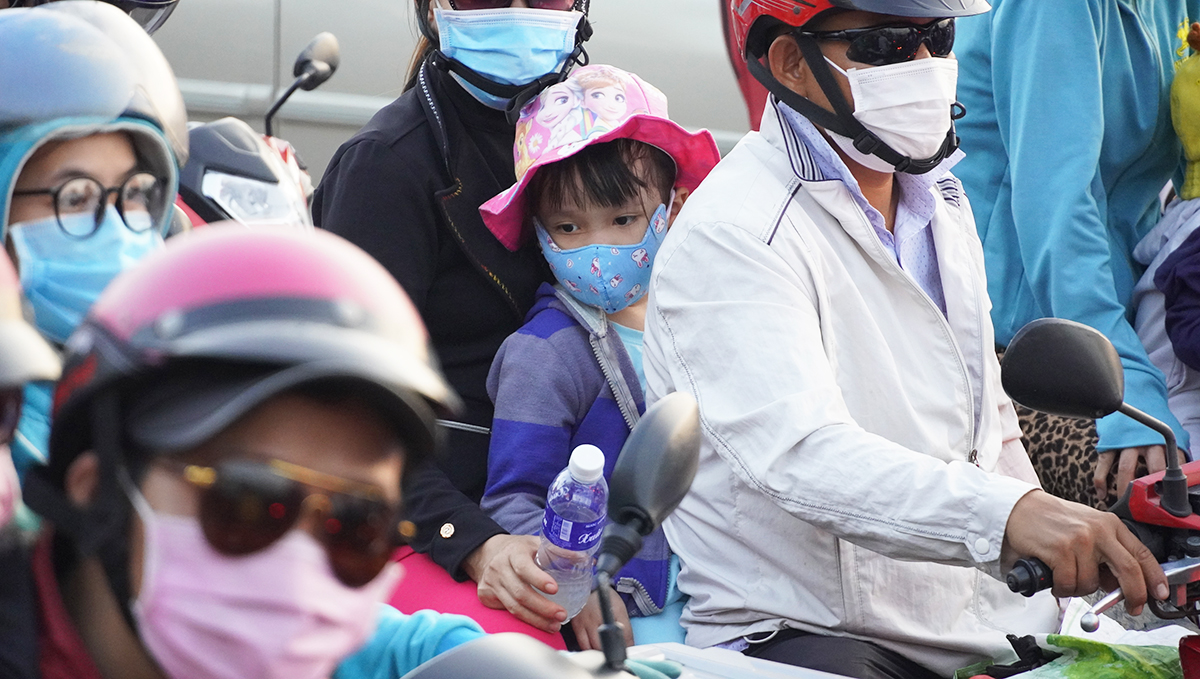 Several people, including children, are stuck in traffic jams along a 10-kilometer section from Rach Mieu Bridge to Luong Phu Intersection of Tien Giang Province. 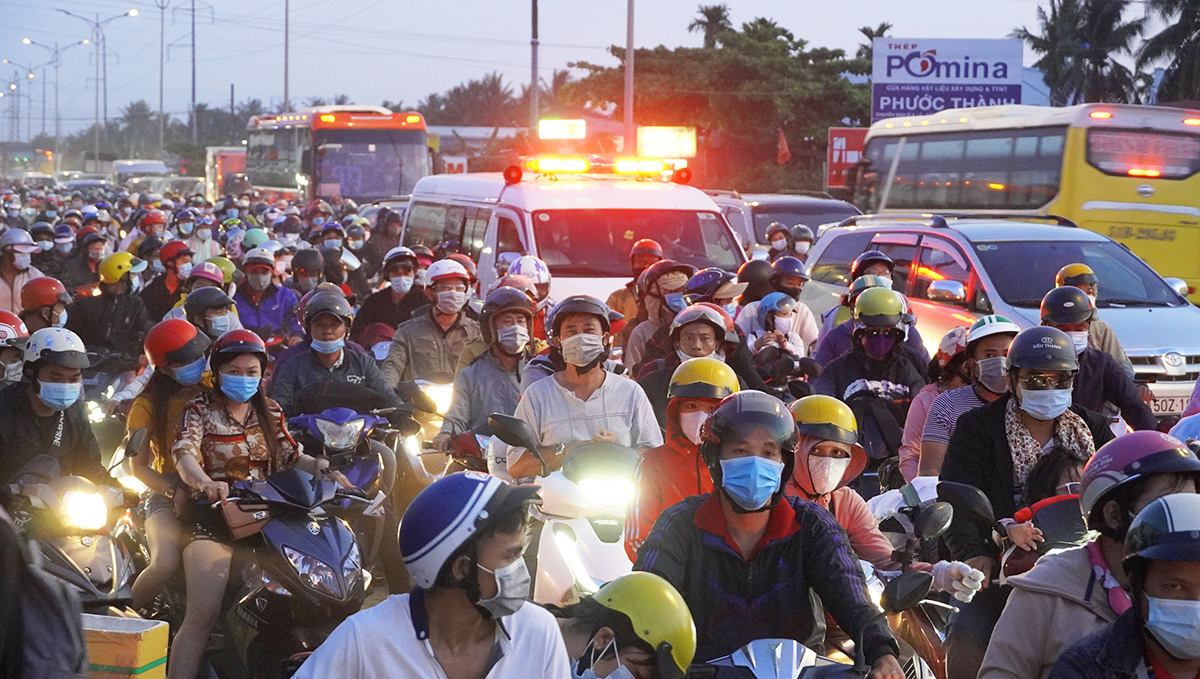 An ambulance is seen stuck in traffic at Luong Phu Intersection, located between National Highway 1 and an entrance leading into HCMC-Trung Luong Expressway.

On Monday, the last day of the holiday, traffic jams are expected to heighten at Rach Mieu Bridge, National Highway 1 and HCMC-Trung Luong Expressway as even more people return to the southern metropolis.

A specialty from Vietnam’s Pearl Island

HCMC – Phu Quoc is referred to as Vietnam’s pearl island due to its beautiful scenery. Yet there is another aspect about the island which is worth trying—its gastronomy. Among the local dishes is “ken” noodle soup with its herbs. This specialty can be said to be typical of Phu Quoc Island off the coast of Kien Giang Province.

According to locals, “ken” is a word of the local Khmer language used to designate dishes made from coconut milk. Several versions of “ken” noodle soups are available in Chau Doc and Can Tho cities in the Mekong Delta. However, Phu Quoc-style “ken” noodle soup is different from its counterparts in one way or another.

The broth of the dish is cooked from nhau or ngan (Salangidae) fishes instead of snakehead fish like normally found in other versions of the noodle soup. The fish to be used are cleaned and boiled until they become soft. Next, they are filleted and pounded finely. This phase is indispensable as it helps the noodle soup have a special flavor.

In fact, making the broth is quite complex. Pounded fish flesh is stir fried with garlic, ginger grass and chilies until it turns crispy. Then, the crispy fish flesh will be cooked with coconut milk and the broth from boiled fish flesh. This mixture should be simmered to make it thicker. Among the accompanying spices, five-spice powder or curry powder is essential to create an eye-catching yellow for the dish.

The Phu Quoc-style “ken” noodle soup is served with herbs, green papaya salad and sweet and sour fish sauce. Moreover, diners can enjoy the broth with bread instead of noodles.

The noodle soup is an ideal combination of a wide range of ingredients such as coconut milk, sea fish, chili and green papaya, to deliver an unforgettable taste.

Mai Chau district in Hoa Binh province is only a 3-hour drive from Hanoi along National Highway No 6. After crossing Cun gradient and Quy Hau gradient to Thung Khe Pass, Mai Chau district appears before the eyes. This land is nothing short of majestic, with mysterious primeval forests featuring the sound of gurgling streams that soothe the mind. The district is also known for its many specialities, such as Noong Luông purple garlic, Pù Bin bitter cabbage, Pà Cò snow tea, and Thung Khe sticky corn.

Mai Chau currently boasts 12 relics and landscapes, of which 5 are recognised by the Ministry of Culture, Sports and Tourism.

There are also many places in the district with great potential for tourism development, such as Sang Tạm Lake, Noong Luông, Hang Kia, Pà Cò, and primeval forests. Mai Chau is a treasure trove of rich culture and folklore, with festivals such as a rain praying festival and the Gàu Tào festival of the Mong people. Ten years ago, Mai Chau district made a mark on the tourist map, and recently developed community-based tourism in many villages.

The beautiful nature and unique cultural identity of Mai Chau district have long been listed on Vietnam ’s tourist map, with the US’s Business Insider magazine writing it has an indigenous culture worth exploring and offers a variety of interesting experiences. The nature, culture, land, and people of Mai Chau leave an indelible impression on visitors, bringing a sense of lightness and relaxation to those visiting for the first time and a feeling of nostalgia to those returning once more./.

Workers in Vietnam begin their four-day holiday marking the Reunification Day (April 30) and the International Labor Day (May 1) from Friday.

Countless motorbikes, automobiles, and long-haul buses were traveling at a snail’s pace along these routes.

The entrance of the bus station was also jammed, with commuters hopelessly honking their horns.

Hundreds of travelers waited for their passenger buses with frustration along the sidewalks.

Many of them decided to rest at nearby cafés until the situation improved.

As of 9:15 pm the same day, the congestion had remained severe despite traffic police’s efforts.

Passengers must have their body temperature measured before getting on their buses and must wear face masks during the entire journey.

Phu Quoc, dubbed ‘pearl island’, has become a top tourist destination after it built an international airport in 2012 and the government rolled out a 30-day visa-free policy for foreigners in 2014.

Da Lat, a popular resort town in the Central Highlands province of Lam Dong, received over 145,000 visitors, up 180 percent. Many of its downtown streets were jammed last weekend by holiday crowds. Da Lat was the most sought for holiday destination by Vietnamese travelers during the national holiday, according to Booking.com, the world’s biggest accommodation website.

In the central region, Da Nang, home to long, sandy beaches such as My Khe, welcomed 75,000 tourists, 10 times higher year-on-year.

The latest outbreaks prompted local authorities to suspend pedestrian streets and night markets while many tourist and religious sites have also been closed to prevent crowds amid the high risk of community transmissions.