HCMC – Strong cash flows coupled with positive investor sentiment, triggered by a surge in the liquidity on the Hochiminh Stock Exchange, pushed the VN-Index to an all-time high of 1,252.45 points today, April 12.

Trade volume totaled some 890.31 million shares worth over VND21.5 trillion, up 21.49% in volume and 18.17% in value from the previous session. The value of traded stocks was also the highest-ever.

Some 32.67 million shares worth over VND1.5 trillion were traded in block deals.

In the VN30 basket, only six stocks tumbled.

Other major contributors were bank stocks, with large-cap ones increasing more than 1% each. Notably, STB soared 3.3% at VND23,450. It also led the southern bourse in terms of liquidity with 49.31 million shares changing hands.

The HNX-Index of the Hanoi Stock Exchange also continued its upward spiral, adding 1.75 points against the session earlier at 293.79 points.

There were more than 183 million shares worth some VND3.1 trillion changing hands, with nearly 8.6 million shares, valued at VND120.39 billion, being traded in block deals.

Some large-cap stocks in the HNX30 basket inched up, such as lender SHB by 0.4% and stone processor VCS by 0.7%.

Trading and food service firm KLF and securities enterprise ART, which are associated firms of FLC, were the most actively traded stocks on the bourse with matching volumes of 15.77 million and 1.85 million shares, respectively. ART rose 6.9% at VND10,900 and KLF surged 8.7% to its ceiling price of VND5,000. 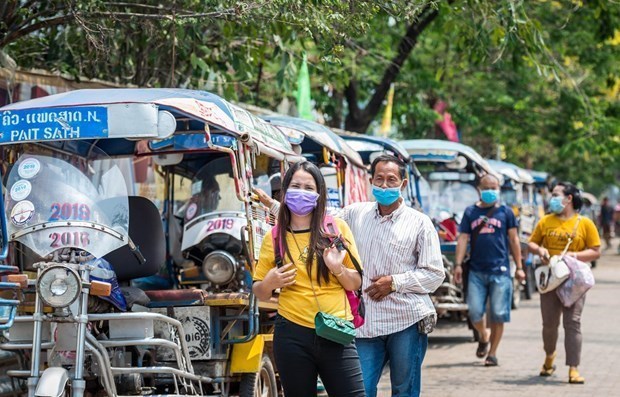 Vientiane (VNA) – Laos reported two new COVID-19 cases, one of whom has not left the country over the past one year, the Ministry of Health announced on April 11.

He tested positive for the coronavirus SARS-CoV-2 on April 10, and may be the first infection in the community recorded in Laos after about one year. A week ago, the patient had close contact with several Thai nationals who illegally entered Laos.

The other patient is a Lao national who returned home from Mongolia on April 9.

Both of them are being quarantined and treated at Mittaphab hospital.

The Lao government has warned people nationwide not to neglect prevention and control measures against the pandemic./.

Among the new cases, there are five imported cases from India, Ukraina, Moldova, Uzbekistan, and Germany, and the remaining four Vietnamese returnees. All of them were put into isolation upon entry to undergo treatment at local hospitals.

Following the latest discovery, the overall number of positive coronavirus cases rose to 2,705 nationwide, including 1,570 local infections and, 1,135 imported cases.

Meanwhile, more than 36,930 people are being quarantined for medical surveillance, while 50 cases have tested negative for the SARS-CoV-2 virus at least one.

The ministry reported that a further 6,005 people were given COVID-19 vaccinations from April 5-11, boosting the total number of vaccinated people to 58,418.

Elsewhere, the northern province of Yen Bai has received 4,500 doses of AstraZeneca vaccine for COVID-19 prevention and control from the National Institute of Hygiene and Epidemiology. It is expected that the vaccination will be launched in early May.

They are five foreigners and four Vietnamese citizens who were put under quarantine in Hanoi, Ho Chi Minh City, Da Nang city, and Bac Ninh and Kien Giang provinces right after their arrival.

The ministry said 16 patients were given the all-clear from coronavirus SARS-CoV-2 on April 12, bringing the total recoveries to 2,445.

Among patients still under treatment, 16 have tested negative for the virus once, 18 twice and 18 thrice.

As many as 36,938 people who had close contact with COVID-19 patients or entered Vietnam from pandemic-hit regions are currently quarantined across the nation.

To live safely with the pandemic, the Ministry of Health advised people to remain proactive in pandemic prevention and control by continuing to wear face masks when going out, disinfecting frequently, maintaining a safe distance, refraining from mass gatherings, and making medical declarations.

During a meeting held between municipal authorities and the National Steering Committee for COVID-19 Prevention and Control on April 12, Phong said that on April 10 alone Cambodia recorded a further 477 positive COVID-19 cases, with the figure rising to 800 in Thailand.

He therefore urged local authorities to take steps to reinforce measures aimed at combating the COVID-19 pandemic, although there has been no new cases detected within the community over the past two months.

This comes after the border area in Long An province has witnessed many young Chinese nationals illegally enter the country with the aim of moving on to Cambodia in order to find employment.

Furthermore, the number of overseas Vietnamese who have tried to return home from Cambodia has been rising due to concerns about the development of the COVID-19 pandemic in the neighbouring country.

The mayor has therefore called on every ward and commune to closely monitor the number of immigrants, with local policemen being urged to co-ordinate efforts with soldiers in order to ensure safety when receiving and putting illegal immigrants into isolation.

As of April 10, as many as 7,530 medical workers have been vaccinated in the first stage against the SARS-CoV-2 virus, with Ho Chi Minh City set to receive 56,000 doses for the second stage of the ongoing vaccination process this week.

Furthermore, over 42,000 medical workers and 10,000 staff working at airports remain among the priority group in the second stage, according to Nguyen Tan Binh, director of Ho Chi Minh City’s Department of Health.

Phong added that although the southern city has received the largest amount of vaccines across the country, it will not be enough to vaccinate all local residents.

Whilst the risk of the COVID-19 pandemic outbreak remains significant residents must stay vigilant and local authorities should also prepare for the worst case scenario, he stressed.

The retail price of petrol has fallen by over VND45 per litre as of 4:30 p.m. on April 12, thereby marking the first decrease in five months.

This latest price drop is the first to occur since November 11, 2020, with domestic fuel prices previously recording five months of consecutive rises. Before their declines occurred, the price of E5 RON92 price over the five-month period had increased by VND3,966 per litre whilst the price of RON95 had risen by VND4,345 per litre.

The latest price changes have occurred following a review of fuel prices conducted by the two ministries, a process which takes place every 15 days as a means of ensuring that domestic prices stay in line with global market fluctuations.