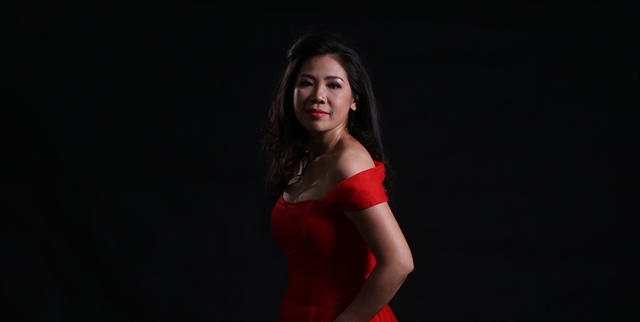 HCM CITY The HCM City Ballet Symphony Orchestra and Opera (HBSO) will kick off the 2021 season with a night of arias from famous French operas at the city’s Opera House on March 28.

The concert will open with the overture to the five-act opera Mireille by French composer Charles Gounod. It premiered in 1864.

The work tells the love story of Mireille, a young woman from a good Provencal family and the poor farmer Vincent.

The concert will continue with the 13th movement titled The Swa n from the 14-movement musical suite by French composer Camille Saint-Saens.

The Swan, the suite’s famous cello solo published in 1887, will be performed by Meritorious Artist and cellist Nguyễn Tấn Anh.

Meritorious Artist Hồng Vy will sing Depuis le Jour (Since the Day), a love song from the four-act opera Louise by French composer Gustave Charpentier which premiered in 1900.

The works will be sung by Đào Mác, Phạm Khánh Ngọc and Phạm Trang along with the HBSO chorus.

After the intermission, arias from Georges Bizet’s Carmen , including Habanera , Parle moi de ma mere (Tell about My Mother), Escamillo , and Je dis que rien ne m’epouvante (I Say that Nothing Frightens Me) will be sung.

The HBSO chorus and orchestra will be featured.

The concert will begin at 8pm. The venue is at 7 Lam Sơn Square in District 1. Tickets can be purchased at the venue’s box office and www.ticketbox.vn . VNS

Vietnam has become the world’s leading heritage destination selected by the World Travel Awards (WTAs) in 2020, beating out other nominees such as Brazil, Egypt, Moscow (Russia), Porto (northern Portugal), and Saudi Arabia.

This was the second year in a row that the country won the title which proves the country’s efforts in preserving its cultural heritage. It is the golden opportunity for Vietnam to continue  affirming the appeal of Vietnamese tourism, its brand as well as improving its position on the international tourist map.

The WTAs collected votes by travel industry professionals and travelers around the world. The awards were presented by the WTAs following a year-long search for the world’s top travel, tourism and hospitality brands.

Earlier, for the fourth consecutive year Vietnam was named Asia’s leading destination in the culinary, culture, and heritage categories at the 2020 World Travel Awards – Asia region.

The vision of freedom of navigation in Pacific waters was promoted to challenge China’s assertiveness in the South China Sea.

US Secretary of State Mike Pompeo will have a series of meetings with foreign ministers from across the Indo-Pacific region on September 9-11 as part of efforts to boost ties with its partners in the zone that China is showing expansionism.

The Secretary will address US priorities in the Indo-Pacific and share details on Washington’s efforts to “support a free and open region based on principles of sovereignty and pluralism” at the region’s premier leaders-led forum on political and security issues.

On the same day, Pompeo will join his ASEAN counterparts for the US-ASEAN Ministerial meeting in which the Secretary will “highlight progress on the US-ASEAN Strategic Partnership and support for ASEAN and the ASEAN Outlook on the Indo-Pacific.”

“The partnership will expand on cooperation begun in 2009 under the Lower Mekong Initiative by strengthening the autonomy, economic independence, and sustainable development of the Mekong partner countries.”

On the same day, the secretary will participate in the 27th ASEAN Regional Forum Foreign Ministers’ Meeting, the region’s oldest and largest political-security forum.

At the event, he will “reiterate the importance of ensuring peace and security on the Korean Peninsula and highlight US efforts and investments to advance the women, peace, and security agenda in the Indo-Pacific region.”

Washington’s free and open Indo-Pacific strategy was initiated by then-Secretary of State Rex Tillerson in late 2017. The vision of freedom of navigation in Pacific waters was promoted to challenge Chinese assertion of sovereignty in the South China Sea.

An alternative development model in the Southeast Asian region with resources to feed it was seen as necessary to roll back the Chinese Belt and Road Initiative (BRI), according to Asia Times.

In December 2018, President Donald Trump signed into law the Asia Reassurance Initiative Act (ARIA) authorizing the allocation of US$1.5 billion for developing “a long-term strategic vision and a comprehensive, multifaceted, and principled US policy for the Indo-Pacific region, and for other purposes”, indicating a shifting of US focus to the Indo-Pacific region.

The geopolitical significance of the Indo-Pacific region has grown as a result of the major powers’ extensive reliance on sea routes for the transportation of energy resources and commercial goods.

Among areas, the South China Sea has not only emerged as one of the world’s busiest commercial waterways but has become one of the most controversial geopolitical hotspots, pitting Chinese territorial claims against the Quadrilateral Security Dialogue’s emphasis on a rules-based order.

The Quadrilateral Security Dialogue (Quad) is an informal strategic forum between the US, Japan, Australia and India that operated both as a meeting format for senior officials to discuss regional security issues and as the basis for a single naval exercise and a single tabletop exercise.

It has been bought for screening in the Middle East, Taiwan, Thailand, Cambodia, Laos, Singapore, and Malaysia.

Giant agency Endeavor Content has been in touch with the film’s producers to buy the rights for showing in Indonesia, the Philippines, Myanmar, Australia, and New Zealand.

Nelson Mok, its Singapore-based director of financing and sales, said: “While international audiences are relatively unfamiliar with Vietnamese cinema, our buyers are impressed with Kiet’s style of visual storytelling and high production quality.”

“We feel highly encouraged by the market response to the film so far, which was sold just based on the director’s sizzle reel and later a promo reel.”

“Bong De” is about a father and two daughters living in a centuries-old ancestral house after suffering from a family tragedy. Later many family secrets start to emerge and change their lives.

It is set to release in Vietnam on May 14.

Le Van Kiet, 42, is a Vietnamese-American who graduated from the University of California Los Angeles (UCLA) School of Film and Television.

It was Vietnam’s official entry at the 2020 Oscars.

HCMC – Bizet’s Carmen, Gounod’s Faust and Donizetti’s La fille du regiment are all great French operas, and extracts from them feature in the opening concert of the new season by HCMC Ballet, Symphony Orchestra and Opera (HBSO) to be given on March 28 in the Saigon Opera House.

Carmen takes pride of place with an extensive series of numbers occupying the whole second half of the evening.

The concert begins, however, with the overture by Gounod to his opera Mireille, followed by the choral item “Farandole” from the same work.

Written in 1864, the opera concerns the love between Mireille and Vincent. A farandole is a dance performed in a circle and this example opens the opera’s second act where villagers are waiting for a race to begin.

Next comes a very famous item, “The Swan” from Saint-Saens’ Carnival of Animals. The cello solo in the piece will be performed by the HBSO’s Meritorious Artist Nguyen Tan Anh.

Charpentier’s most famous stage work is Louise (1900), and the most famous item in it is Louise’s hymn to love, “Depuis le jour” (‘Since the day’). This will be sung by Meritorious Artist Tran Hong Vy.

Another celebrated item follows, the “Bell song” from Delibes’ opera Lakme (1883). The opera is set in India, and Lakme is the daughter of a Brahmin priest. Her Bell Song covers a wide vocal range in the “coloratura soprano” style. It will be sung by Pham Khanh Ngoc.

Gounod then returns with an aria from Faust, sung by Dao Mac. The opera was premiered in 1859, and tells of Faust’s pact with the devil. The aria we’ll hear is “Avant de quitter les lieux” (‘Before I leave this town’). It has been recorded by many famous baritones including Hvorostovsky and Fischer Dieskau.

Donizetti was an Italian composer but he wrote his comic opera La fille du regiment (1840) to a French libretto while living in Paris. Tenor Pham Trang will tackle its most famous aria, “Ah! mes amis” (‘Ah my friends’) which requires the soloist to hit eight high C’s in a row.

Offenbach’s chorus “Tourne, danse” (‘Turn, dance’) ends his operetta La Vie Parisienne, a complete production of which was seen in Saigon in 2016. It will be sung by the HBSO Chorus and will conclude the concert’s first half.

Highlights from Bizet’s Carmen (1875) occupy the entire second half of the concert.

The celebrated “Habanera” comes early on, with Phan Hong Diu and the HBSO Chorus. Then comes the duet between Don Jose and Micaela “Parle moi de ma mere” (‘Speak to me about my mother’) sung by Pham Trang and Phan Duyen Huyen. Soon after comes the bull-fighter, Escamillo (Vo Nguyen Thanh Tam), followed by the Quintet with five soloists.

Micaela’s aria “Je dis que rien ne m’epouvante” (‘I say nothing that frightens me’) will be sung by Nguyen Thu Huong, and the closing duet between Don Jose and Escamillo will be performed by Tran Thanh Nam and Vo Nguyen Thanh Tam.

Among the films, “Yellowbird”, a heartwarming tale of an orphaned bird leading a migration across the world, is a special cinematic work. The film is the first 3D animation to be produced entirely in France with a talented team from Europe. French animator and director Benjamin Renner, co-director of Oscar-nominated “Ernest & Celestine” (2012), created the character designs for the film. The music is the work of British composer Stephen Warbeck, who won an Oscar for his soundtrack to “Shakespeare in Love” (1998).

The remaining films have all been recently made, with funny content close to children bringing messages close to life. Along with the desire to bring the audience warm and happy moments with family and friends, the organizing board also hopes the audience will take the opportunity to understand more about French cinema, in addition to the familiar Christmas works of Hollywood.