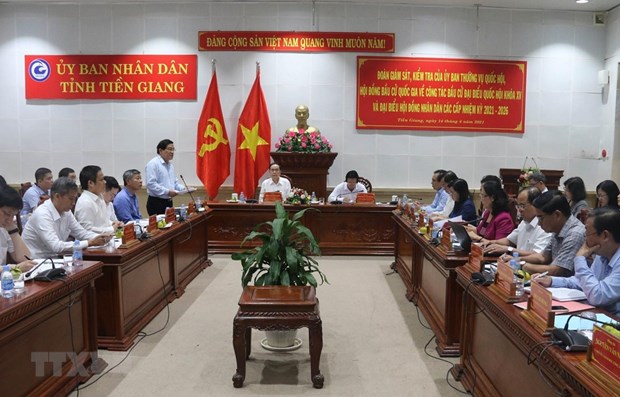 At the working session (VNA)

Tien Giang (VNA) – Vice Chairman of the National Assembly (NA) Tran Thanh Man on April 14 led a delegation to inspect preparations for the elections of deputies to the 15th legislature and all-level People’s Councils for the 2021-2026 tenure in the Mekong Delta province of Tien Giang.

Man, who is also Vice Chairman of the National Election Council, lauded the efforts of the province in its election preparation s.

To make the elections a success, the provincial Election Committee and agencies in Tien Giang need to set forth plans to ensure political security, social order and safety, pandemic prevention and control, and natural disaster mitigation, he said.

More attention should be paid to the settlement of complaints and denunciations, the legislator said.

Man was informed that the Viet na m Fatherland Front Committee’s Standing Board in Tien Giang will hold a third negotiation conference on April 16 to prepare a list of eligible candidates for the elections of deputies to the 15th NA and all-level People’s Councils for 2021-2026.

The province has more than 1.5 million voters and 1,451 constituencies, including 20 military units./.