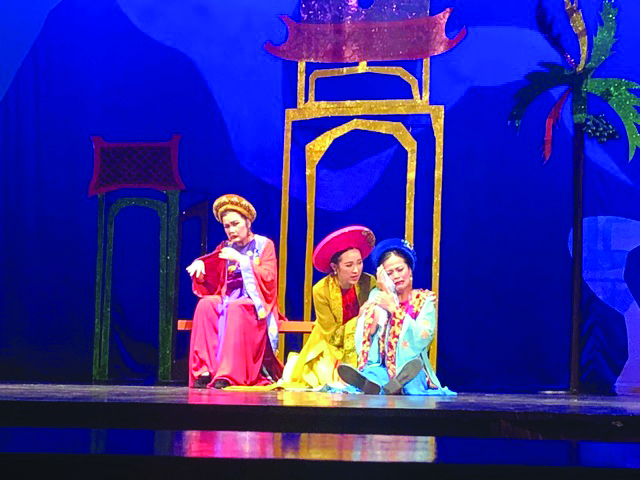 Actors perform in costumes by fashion designer Sĩ Hoàng of HCM City. Hoàng is working with actors of the Hoàng Yến Drama Club to produce Khóc Giữa Trời Xanh (Crying under the Blue Sky), a new play on Vietnamese history, in an aim to lure audiences back to the theatre. — Photo courtesy of the producer

HCM CITY — Well-known fashion designer Sĩ Hoàng is working with a group of actors in HCM City to produce a new play about Vietnamese history in an aim to lure audiences back to the theatre.

Hoàng is working as a stage costume designer for Khóc Giữa Trời Xanh ( Crying under the Blue Sky), a tragic work featuring the life of Lê Văn Thịnh, a famous official of the royal court of the Lý Dynasty in 1084.

He was also invited to play the lead role Thịnh after casting. He has worked with skilled actors of the Hoàng Yến Drama Club to perfect his performance.

Khóc Giữa Trời Xanh is directed by Nguyên Phùng. The play depicts the themes of patriotism and honesty.

“Director Phùng asked actors to read documents and books about the history of Lý Dynasty, its culture and people. This helped to breathe life into the play.

“I hope our performance will leave a new impression on audiences,” he said. 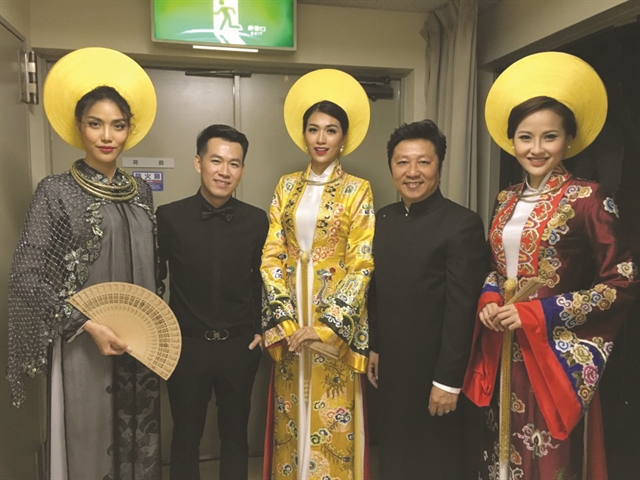 Fashion designer Sĩ Hoàng (second from right) has many years in stage costumes design. — Photo courtesy of the producer

Hoàng has been working as a stage costume designer for many years with a large number of his products used in large-scale plays, including two produced by the Việt Nam Chèo Theatre and the Hà Nội Drama Theatre, to celebrate the 1,000th anniversary of Thăng Long-Hà Nội.

He has tried his hand at acting, and achieved his first success winning a silver prize for his role in Yêu là thoát tội at the National Drama Festival 2018 in Hà Nội.

Hoàng has worked with experts such as Professor Dương Trung Quốc in Hà Nội and Professor Nguyễn Khắc Thuần in HCM City for his latest drama. “This helps me understand the national and local tradition from the period in which the drama is set,” said Hoàng.

He painted flowers on áo dài which were worn by the competition’s winners. His designs impressed judges and audiences. The trend of painting on áo dài was born.

In 2002, he opened Đi ểm Một Thời , a tea shop offering fashion shows and Vietnamese tea served in traditional style. The luxury shop quickly became an essential part of life in HCM City for many residents.

Điểm Một Thời served Queen Sylvia of Sweden and her husband King Carl Gustaf XVI during their tour to Việt Nam in 2004. They revealed their musical side when they played the parts of “cup clickers” during a performance of traditional Vietnamese music at the shop. They also watched beautiful girls in áo dài at a fashion show.

“In Khóc Giữa Trời Xanh , we will offer Vietnamese drama in the style of the South,” said Hoàng.

The play Khóc Giữa Trời Xanh will make its debut on May 12 at the city’s Opera House at 7 Lam Sơn Square in District 1.  VNS

As the name of the work IntraStorm – hurricanes sweeping away all human knowledge about natural disasters and epidemics, young talented art director-choreographer Vu Ngoc Khai shares his perspective on life’s origin, integrity and magnitude hidden in a small seed. Inspired from the events in 2020, his work highlighted the relationship between humans and Mother Earth.

The Hanoitimes – The South Korean IT giant expected Vietnam would not only be its largest production hub, but also a strategic base for R&D.

Samsung Vietnam broke ground today [March 2] for its largest R&D center in Southeast Asia in the West of Hanoi, said the company in a statement.

The R&D center project is a result of meetings between Prime Minister Nguyen Xuan Phuc and Samsung’s Vice President Lee Jae-yong in 2018 in Hanoi and 2019 in Seoul.

This is Samsung Electronics’ first R&D center outside South Korea, and also the largest of its kind by a foreign-invested business in Vietnam, Samsung said.

The project is expected to help enhance research capabilities of Vietnamese engineers not only in products development, but also in artificial intelligence (AI), internet of things (IoT), big data, and the fifth generation (5G) network, among others, creating a solid foundation for Vietnam to grasp opportunities from the Fouth Industrial Revolution.

“The construction of this R&D center marks a strategic milestone of Samsung’s investments in Vietnam. This is where we realize our commitment in contributing to the development of Vietnam’s science and technology sector through training and nurturing local talents,” said Choi Joo HO, CEO of Samsung Vietnam.

Samsung’s statistics revealed around 50% of its smartphones and tablets are produced in Vietnam and exported to 128 countries and territories, including the US, Europe, Russia and Southeast Asia.

The South Korean IT giant expected Vietnam would not only be its largest production hub, but also a strategic base for R&D.