The President expressed his belief that the new ambassadors will fulfil their assigned missions, serving as a bridge to promote friendship and bilateral relations with Vietnam.

He affirmed that Vietnam will create favourable conditions for the ambassadors during their tenure.

Also, he wished that the friendship and cooperative ties between Vietnam and those four countries will develop unceasingly, bringing practical benefits to each nation as well as contributing to regional and global peace, cooperation and development.

Vietnam and China established diplomatic ties on January 18, 1950 and entered into a comprehensive strategic cooperative partnership in 2008. The two countries have maintained regular high-level visits and meetings. To date, they have 53 cooperative and exchange mechanisms between the two Parties, Governments, parliaments, social organisations and localities. China is currently the biggest trade and tourism partner of and the 8th biggest foreign investor in Vietnam while the latter is the largest trade and tourism partner of China in the ASEAN.

Norway established diplomatic ties with Vietnam on November 25, 1971. The Scandinavian country now has 31 valid investment projects in Vietnam with total registered capital of more than US$86 million, ranking 46th out of 115 countries and territories investing in the country. Most of the projects are in wood processing, building material and interior décor, agro-forestry, aquaculture, information and media.

Meanwhile, Vietnam and Canada set up diplomatic relations in 1973 and lifted their relationship to a comprehensive partnership in November 2017 on the occasion of Canadian Prime Minister Justin Trudeau’s trip to Vietnam for an official visit and to attend the 27th APEC Economic Leaders’ Meeting. Vietnam is the largest trade partner of Canada in the ASEAN bloc, with two-way trade in 2017 reaching nearly US$5 billion. Canada is 14th largest foreign investor in Vietnam with US$4.1 billion in 149 projects.

Vietnam and Uruguay set up diplomatic relations on August 11, 1993. Since then, both sides have exchanged high-level delegations, maintained bilateral meetings at multilateral forums, and inked numerous cooperative documents in economy, trade and sci-technology.

He is one of the 49 candidates distributed across the capital city’s ten constituencies, from which 29 will be selected for the 15th National Assembly.

President Nguyen Xuan Phuc will represent Ho Chi Minh City in a constituency that comprises the districts of Cu Chi and Hoc Mon while Prime Minister Pham Minh Chinh is a candidate in the Mekong Delta city of Can Tho.

Ho Chi Minh City will select 30 deputies for the 15th National Assembly from 50 candidates while Can Tho will pick 7 from 13 candidates.

In the meantime, National Assembly Chairman Vuong Dinh Hue will have the vote of constituents in the port city of Hai Phong, which will choose 9 deputies from 15 candidates.

Permanent member of the Secretariate Vo Van Thuong is one of the 10 candidates in Da Nang, from which six deputies will be elected.

The National Assembly election is scheduled to take place on Sunday May 23, when voters will also select their representatives for the People’s Councils at all levels. 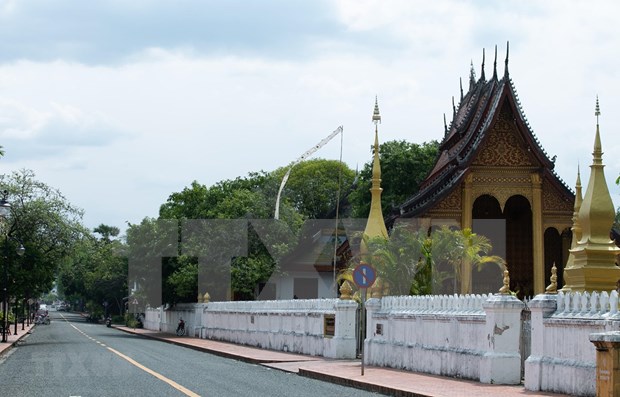 A desert street in Luang Prabang, Laos, during the lockdown period (Photo: VNA)
Hanoi (VNA) – Party General Secretary Nguyen Phu Trong and State President Nguyen Xuan Phuc have sent a letter of sympathy to Lao Party General Secretary and State President Thongloun Sisoulith over the resurgence of COVID-19 and the loss caused by the pandemic in Laos.

In the letter, the Vietnamese leaders noted that the COVID-19 pandemic is continuing with complicated and unpredictable developments, causing profound impacts on every aspect of socio-economic life in all countries, including Vietnam and Laos. They stressed that the Vietnamese Party, State and people always closely follow the situation in Laos and sympathise with the difficulties that Laos is facing due to the pandemic.

“We appreciate the measures that the Lao Party and Government have been implementing to prevent and control the COVID-19 pandemic, and we believe that under the leadership of the Lao People’s Revolutionary Party headed by Comrade Thongloun Sisoulith and the drastic management of the Lao Government, as well as with the unity of the entire political system and the consensus and support of all Lao people, Laos will be able to stop and curb the spread of the pandemic in the shortest time possible,” the two leaders wrote in the letter.

They informed the Lao leader that Vietnam has implemented strong measures and mobilized the participation of the entire political system and all the people in order to timely stop the spread of COVID-19. “We continue to implement drastic measures to contain sources of infection and actively conduct vaccinations,” they said, adding that Vietnam has basically curb the spread of the pandemic, which is an important achievement hailed by both domestic and international community. This outcome reflects the strength of the national unity bloc and the superiority of the socialist regime, read the letter.

The Vietnamese leaders affirmed that Vietnam is always ready to cooperate, assist and share experience with Laos in the fight against the pandemic, so that both countries can early stabilize the situation and resume socio-economic development for a better life of their people./.

Monetary policy should be maneuvered in a flexible and active manner to ensure sustainable growth and stability of both monetary and foreign-exchange markets, said the Party chief Nguyen Phu Trong.

As a “veins” for the economy, the banking sector should continue to push for a comprehensive reform to better support the country’s process of modernization and industrialization.

General Secretary of the Communist Party of Vietnam Nguyen Phu Trong gave the remarks at a ceremony marking 70th anniversary of Vietnam’s banking sector today [May 5].

“Priorities for the sector is to control inflation, stabilize macro-economic conditions and meet credit demand as the country continues pushing for greater socio-economic development,” said Trong, adding these tasks are of significance during the period of economic recession as a result of the Covid-19 pandemic.

The Party chief referred to the resolution of the 13th National Party Congress on the orientation for economic growth, saying the State Bank of Vietnam (SBV) should run monetary policy in a flexible and active manner along with other policies to ensure sustainable growth and stability of both monetary and foreign-exchange markets.

While the banking sector remains a major source of capital supply for the economy, Trong noted SBV’s policies would have major impacts on economic security and public order.

As the local economy is still struggling with Covid-19 impacts, Trong lauded the banks’ efforts in keeping a low-interest rate environment and timely provide capital to help enterprises recover from the current crisis.

Referring to ongoing efforts to restructure credit institutions and settle bad debts in the system, Trong called for banks to catch up with new development trends to reach regional and international levels.

“Along with efforts to deepen international economic integration, macro-economic stability is key to enhance the country’s economic independence,” Hong stated.

Hong said the main objectives of SBV’s plan in restructuring the banking sector is to adopt international practices into banks’ operation for higher transparency and efficiency.

“In a rapidly changing world, a revised legal system for banks would promote the development of new services to better serve enterprises and people, in turn contributing to the process of national digital transformation and digital economic development,” Hong concluded. 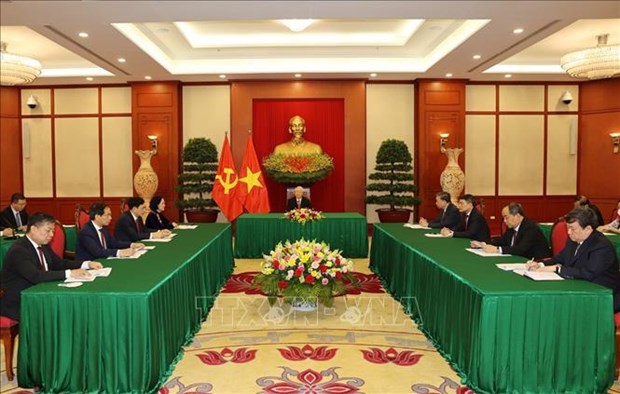 Granma daily newspaper, the official voice of the PCC, reported about the talk between the two Party chiefs of Cuba and Vietnam in a front-page article.

It noted that the two leaders reiterated the intention to continue strengthening the special relations of friendship and cooperation between the two nations, Parties and Government, which are the enduring legacy of Commander-in-Chief Fidel Castro Ruz and legendary revolutionary leader Ho Chi Minh.

Prensa Latina state news agency cited a press release of the PCC noting that during the fraternal telephone conversation, the Party chief of Vietnam congratulated Diaz-Canel on his election as the First Secretary of the PCC Central Committee.

During the talk, Diaz-Canel informed the Vietnamese party leader on outcomes of the eight National Congress of the PCC, which took place on April 16-19, and expressed his gratitude to Vietnam for its support for Cuba in the fight against the US’ economic, trade and financial sanctions.

He also wished Vietnam success in implementing the Resolution adopted at the 13th National Congress of the CPV, Prensa Latina reported.

Other news agencies and online newspapers like the Cuban News Agency (ACN), Cubadebate, Juventud Rebelde and Canal Caribe also made extensive coverage on the first phone talk between Diaz-Canel as PCC leader and the Vietnamese Party leader Trong./.