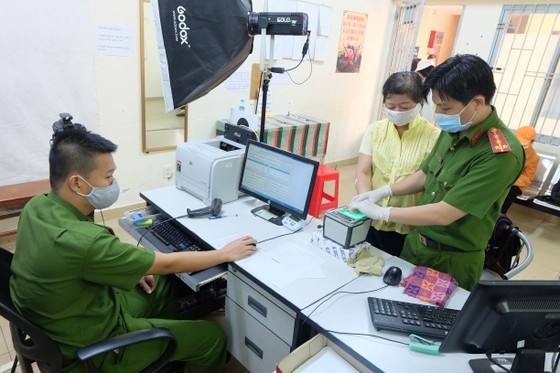 Residents of District 1 are completing the procedure for ID issuance. (Photo: SGGP)

In Ho Chi Minh City, the police in District 4 and Tan Phu District are the two pioneers in using IT to reduce the registration time. In particular, the police force of District 4 allows citizens to register for chip-based ID issuance via Zalo app and make an appointment online for picture, fingerprint collection and fee paying.

The police division of Buon Ma Thuot City in the central highland province of Dak Lak also uses Zalo as a means for answering popular questions as to chip-based ID issuance and announcing the latest notices of this matter.

The most noticeable case is Hai Duong Province, where Covid-19 pandemic has wreaked havoc since January this year. The local authorities here have encountered much trouble in ID issuance due to social distance. In order to ensure the assigned schedule, they have used Zalo to update related news and instructions on the procedure and locations to sign up for new IDs.

The Ministry of Public Security itself has selected the joint venture VNPT-HADIC-GTEL ICT to develop the national population database, the joint venture GTEL ICT – Tecapro – Egov and the joint venture MK Group to build and then operate the system to produce, issue, and manage citizen ID cards. These two systems strictly observe the ‘modern, synchronous, highly secured, and money-saving’ principle and are sited in Hanoi, HCMC.

Both systems apply the biometrics technology to ensure the tracking ability. The second one is able to fully exploit functions and saved information of the first. Both have level-4 information security in compliance with the Government regulation for nation-scaled sensitive information as they have effective solutions for secured authentication, digital signature, and data transmission.

These new ID cards can be accessed anywhere without the need to connect to the Internet, as they have specific card readers. This is expected to effectively minimize fake identification, which is an essential stage of development.

According to Major General To Van Hue – Director of the Police Department for Administrative Management of Social Order, the projects to establish the national population database and the ID issuance system are among the 6 prioritized projects to create a foundation for the development of an e-government and a corresponding transparent governmental ecosystem, in hope of better serving the general public.

Nanoe™ X is a technology that collects invisible moisture in the air and applies a high voltage to it to produce “hydroxyl radicals contained in water”. Hydroxyl radicals inhibit the growth of pollutants such as bacteria and viruses. They are characterised by being strongly oxidative and highly reactive, hence a short life span. Contained in tiny water particles, nanoe™ X has a long lifespan and can spread over long distances. It has an inhibitory effect on both airborne and adhered substances.

In September 2020, Panasonic has verified in collaboration with Texcell*1 the inhibitory effect of the nanoe™ X technology with the benefits of hydroxyl radicals on the novel coronavirus in a small test space of 45L using nanoe™ X generator. For further investigation, Panasonic challenged to test using air conditioner with nanoe™ X in a larger test space. Even in these difficult circumstances, Texcell has now certified that the nanoe™ X does have 91.4% of the inhibitory effect on the novel coronavirus in the actual space of 6.7cu.m in 8 hours using the air conditioner with nanoe™ X. This testing was carried out in a closed laboratory environment and was not designed to assess its efficacy in uncontrolled living spaces.

Panasonic has been researching on nanoeTM Technology over the past 20 years since 1997 and has verified its effectiveness in a variety of areas, including inhibiting pathogenic microorganism (bacteria, fungi, and viruses) and allergens, breaking down PM 2.5 components that have adverse effects on the human body*2.

Panasonic will continue to pursue the potential of nanoe™ X technology to address possible risks associated with air pollution such as new pathogenic microorganisms, to create healthy environments for people around the world.

Project director Dr. Phi Quyet Tien, Deputy Director of the Institute of Biotechnology under the Vietnam Academy of Science and Technology, explained that pig farming is one of Vietnam’s key economic sectors. Products of the livestock industry have not only met domestic consumption needs, but also export requirements. Feed accounts for 70 percent of production costs and is the main factor determining the product quality and prices.

However, available raw materials such as vegetables, grass and industrial and agricultural by-products have not been used effectively, requiring an appropriate solution to minimize dependence on imported materials.

“In Vietnam, studies on fermentation to increase nutritional value are relatively new. Notably, raising pigs on Fermented Liquid Feeding (FLF) is a technology applied widely in many countries around the world, especially after Europe issued a ban on antibiotics use in animal feed,” Dr. Tien emphasized.

The research data show that using FLF for suckling pigs and porkers will nullify the need to add antibiotics to animal feed. FLF has low pH and high density of lactic acid bacteria, and microorganisms with other probiotic functions that help inhibit pathogenic microorganisms in food and available microorganisms in the intestinal tract of pigs. Currently, many pig farms in the Netherlands, Denmark, France, Belgium and Germany are applying FLF technology to take advantage of fresh or unprocessed agricultural by-products with high humidity, such as corn and soybean husks, vegetable processing by-products and potato peels.

This research project contributes to the search for suitable strains of bacteria, which can produce fermented bio-products, taking advantage of agricultural by-products, improving livestock production efficiency and reducing environmental pollution. The objective of the project is to build a technological process and model and produce microbial preparations capable of fermenting forage and agricultural by-products to produce mixed liquid feed, in order to improve feed conversion efficiency and pork quality in pig breeding.

“Over 80 percent of surveyed consumers rated pork delicious, and more than 90 percent of them wished to continue to use pork raised by the FLF feeding method,” said Dr. Phi Quyet Tien.

A new Government resolution aims to use science and technology to ensure nutritional balance in the Vietnamese diet.

Resources will be prioritised to research and apply science and technology to diversify food products to ensure nutritional balance and food safety in diets, according to the resolution on ensuring national food security until 2030.

The resolution, issued on Thursday, stated ensuring national food security is a long-term task and a special concern in the Party and State’s development policies.

From 2009 to 2019 when implementing the 10th-tenure Politburo’s Conclusion No 53-KL/TW on the national food security plan until 2020, Vietnam obtained significant achievements, notably guaranteeing national food security in all circumstances, which greatly contributed to stability and national development, especially amid global economic crises and the COVID-19 pandemic.

Resources must be prioritised for the research, application, and transfer of science and technology to diversify food products to ensure nutritional balance and food safety in diets, the resolution noted.

Tasks and solutions were also pointed out in the resolution, including restructuring and aligning food production with the market; developing infrastructure for food production; stepping up the research, application, and transfer of science – technology in food production, preservation, and processing; improving human resources and reforming mechanisms and policies on ensuring national food security. 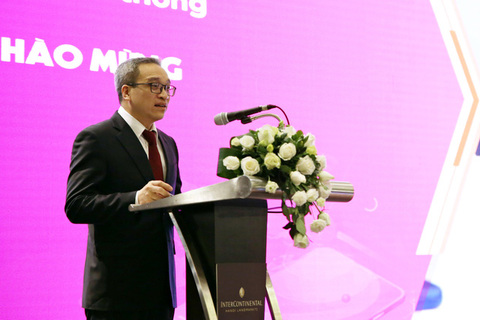 This is an important forum for telecommunications managers and experts to promote the development of services in the Vietnamese market. The theme of this year is developing 5G and broadband infrastructure to enhance the digital transformation process in Viet Nam.

The report “e-Conomy SEA 2020”, which is conducted by Google, Temasek and Bain & Company, showed that Viet Nam’s digital economy reached a total value of US$14 billion last year, $2 billion higher than that of the same period of the previous year.

Out of the total number of digital service users in Viet Nam, new users account for 41 per cent. This turned Viet Nam into a country with the highest rate of new digital service consumers in the region.

Statistics from the General Statistics Office said that Viet Nam was one of the three Asian countries with positive growth with the size of the economy is more than $343 billion. Singapore reached $337.5 billion and Malaysia reached $336.3. billion.

The Vietnamese Government has defined one of the pillars of the digital economy as the telecommunications infrastructure, including both mobile and fixed broadband infrastructure.

The development of broadband infrastructure has paved the way for all other economic sectors to grow within the past two to three years.

However, in order to contribute to the realisation of the national digital transformation project by 2030 and further promote the digital economy, telecommunication investment and exploitation activities in Viet Nam, it still needs a lot of innovation.

The country will test 5G on a large scale and even with Make- in-Viet Nam devices from this year.

Speaking at the opening session, Phan Tam, Deputy Minister of Information and Communications, said that we were entering a digital age and digital society.

The world would continue to witness great changes in the next 10 years, he said, adding that it was a transition from the real world to the virtual world and the transformation of all socio-economic activities into a digital environment.

Data would become an important resource for each country and strong development of connection of all things, he added.

The deputy minister said telecommunications infrastructure was becoming the fundamental infrastructure for the digital economy, digital society and digital government. Mobile and fixed broadband infrastructure would contribute greatly to the development of the country.

A study by the National Institute of Information and Communications Strategy said that the contribution of 5G to the national GDP growth is forecast to reach 7.34 per cent by 2025.

Science, technology, innovation and digital transformation are some of the strategic breakthroughs of the next 10 years to help Viet Nam develop and be among the top middle-income countries by 2030 and high-income industrial countries in 2045.

In that context, the Ministry of Information and Communications is determined to keep pace with the world and be proactive in deploying commercialisation of 5G in Viet Nam.

Also speaking at the event, Michael Jiang, Huawei Viet Nam CTO, said there had been more than 140 carriers in 61 countries around the world deploying 5G networks. The 5th generation mobile network had around 260 million users worldwide.

The current Vietnamese network operators were using most of the indoor networks. That raises many costs, such as construction, procurement of home equipment, site rental costs, electricity costs for the station’s cooling and air conditioning system, said Jiang.

The optimal solution for Vietnamese network operators was to switch to outdoor solutions. These were devices that are hung directly on poles so there is no need to build stations, reducing air-conditioning costs, he added.

According to Huawei’s estimate, with a network of 30,000 stations, the outdoor solution could help Vietnamese operators save operating costs of up to US$133 million per year. — VNS

The award has encouraged agencies and businesses to step up investment and application of digital technology.

He added that digital transformation has changed the way of living, working and business models; improved customer experience; and provided new services.

He called on ministries, agencies, localities, associations, businesses and the entire society to join efforts in speeding up digital transformation in the country.

Over the past three years, the awards have commended 200 outstanding digital initiatives and organizations, according to the deputy minister.

The award would continue to promote digital products, services and solutions, notably “make-in-Vietnam” products, in both domestic and foreign markets, Hong said, adding that the award has also encouraged agencies and businesses to step up investment and application of digital technology.

Deadline for entries submission would be by the end of July, via the link www.vda.com.vn . The award ceremony is scheduled to take place in October and broadcast live by Vietnam Television, on multiple channels or other media platforms.

Winners of Vietnam Digital Awards 2021 will also have the opportunity to introduce and promote their services, products as well as finding partners and investors through a series of events and digital transformation seminars.