At a conference held in Nam Dinh province on May 6, Politburo member, Secretary of the PCC and Head of the PCC’s Commission for Organisation Truong Thi Mai announced the Politburo’s decision on the assignment.

The event was also attended by Politburo member and Head of the PCC’s Commision for Internal Affairs Phan Dinh Trac.

Accordingly, Tuc will resign as Deputy Head of the PCC’s Commission for Internal Affairs to hold the new position, replacing Doan Hong Phong, who was installed as Inspector General of the Government at the recent 11th session of the 14th National Assembly.

Speaking at the conference, Politburo member Truong Thi Mai congratulated Tuc on his new mission, expressing her hope he will use his significant capacity and experience and devote his enthusiasm to the development of Nam Dinh province.

The Politburo member asked the new Party Secretary to work closely with the Provincial Party Committee and lead the successful implementation of the resolution of the committee’s 20th congress.

She also noted that the Nam Dinh Provincial Party Committee will continue leading the whole province in its implementation of COVID-19 prevention and control measures.

For his part, the new Secretary of Nam Dinh Provincial Party Committee promised he will strive to uphold the traditions and experience of his predecessors and make further efforts to develop the locality.

The National Assembly Standing Committee yesterday morning decided to approve the establishment and adjustment of the administrative boundary of Hanoi City and three provinces of Thanh Hoa, Dong Nai and Tuyen Quang at the 55th session.

Reporting at the session, Minister of Home Affairs Pham Thi Thanh Tra said based on recommendations of the People’s Committee of Hanoi, Thanh Hoa, Dong Nai and Tuyen Quang, the Government sent a proposal to the NA Standing Committee to adjust the administrative boundary of eight residential groups in Bac Nghia Tan Area, from Co Nhue 1 Ward of Bac Tu Liem District to Nghia Tan Ward of Cau Giay District.

The Government also proposed to move the administrative boundary of the residential group No 28 from My Dinh 2 Ward of Nam Tu Liem District to Mai Dich Ward, Cau Giay District.

The move aimed to fix shortcomings in administrative management, ensuring compliance with legal regulations after obtaining consensus of the people in the area, she said.

The two towns were already planned to become centres of services, commerce, industry and construction materials combined with developing a supporting service for the local stone carving craft, she said.

The two communes belong to an important traffic hub that could promote socio-economic development in the north-west of Yen Dinh District with neighbouring districts.

It is a junction connecting arterial roads in the region as well as the centre for the district’s socio-economic development.

For Tuyen Quang Province, it was proposed to move the administrative boundary of Phuc Son Commune and Minh Quang Commune from Chiem Hoa District to Lam Binh District.

The adjustment aimed to create favourable conditions for the administrative management of the locality, she said.

Additionally, the Government also submitted to upgrade Lang Can Commune to Lang Can Town in Lam Binh District as well as upgrade Yen Son District to Yen Son Town to create the driving force for socio-economic development in the districts, she said.

Speaking at the session, Chairman of the NA Committee for Legal Affairs Hoang Thanh Tung said the committee approved the establishment and adjustment of the administrative boundary of Hanoi City and three provinces of Thanh Hoa, Dong Nai and Tuyen Quang.

The committee asked the National Assembly Standing Committee to promulgate the resolution on the establishment and adjustment of the administrative boundary of Hanoi City and three provinces of Thanh Hoa, Dong Nai and Tuyen Quang in accordance with the Government’s explanatory reports, he said.

The valid time for the resolution should be July 1. Based on the valid time, relevant agencies and localities would have enough time to adjust related administrative procedures for the operation of the new administrative units and not affect the election of deputies to the 15th National Assembly and People’s Council at all levels for the 2021-26 tenure, he said.

At the 55th session, which took place on one day, the committee also considered the adjustment of the administrative boundary to expand Hue City; the use of capital of Resolution No. 324/NQ-UBTVQH14 to build Vietnamese representative agencies abroad in the period of 2021-25; the plan to use the remaining of the State budget in 2020; as well as the additional fund to buy vaccines, antiseptic chemicals and seeds.  VNS 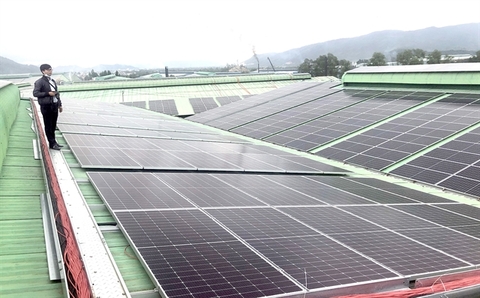 Viet Nam is experiencing a solar boom, with 11.6GW of power of this kind added to the national grid last year, according to the International Renewable Energy Agency.

Only 105MW of solar electricity was installed in the country in 2018, and the figure rose to 5GW only a year later, and even to 16.5GW in 2020, the article said, adding this is a considerable increase compared to other nations at the same time.

As demand for energy in the Southeast Asian country is forecast to shoot up dramatically, big players in the field have invested heavily in solar energy plants. Last summer, a 45MW plant was put into operation in the central province of Ninh Thuan by Sharp Energy Solutions Corporation, contributing some 76MWh per year. The firm is carrying out another five 245MW plants in the country.

The successful solar energy story in Viet Nam was sparked by a special market mechanism, which drew much interest from investors. Due to purchasing power at fixed prices, investors sell the renewable energy they create to the grid at a fixed price – one that would more than cover the cost of investing in renewable energy facilities.

Viet Nam could carry out more bidding mechanisms for solar projects, in which all renewable energy projects not subject to the fixed price mechanism are able to join.

The Vietnamese Government is planning to double the power capacity in the next 10 years. Accordingly, 29 per cent of the nation’s electricity will come from renewable energy source by 2030, and 18 per cent from hydropower.

The capacity of renewable energy is envisioned at 45GW, much higher than the previous plan of 27GW – the level which is achievable within 2021 or next year at the latest.

Although the energy transition is taking place rapidly, coal-generated electricity accounts for 28 per cent of the nation’s total power. However, renewable energy is set to take the lion’s share by 2045. — VNS 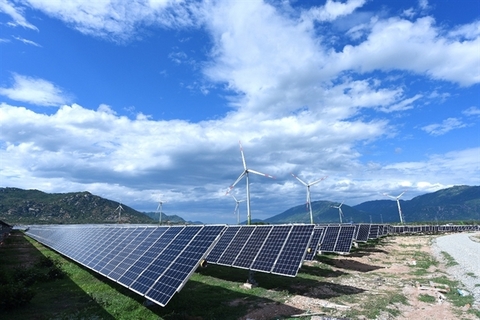 Provinces in central Viet Nam have been attracting more and more wind and solar energy projects.

Quang Tri Province, which aims to become a renewable energy hub, has 13 projects with a total output of 276MW. With an average wind velocity of up to seven metres per second in its mountainous regions in the west, it has great potential in wind power.

Twenty nine projects with a total capacity of 1,117.2MW are set to begin construction in the near future.

Nguyen Tam Tien, its general director, said the company is working on more projects so that by 2027 it could produce an additional 10GW of energy.

Tran Quoc Nam, chairman of the province People’s Committee, said Ninh Thuan has the highest potential for wind and solar power compared in the country, and has prioritised renewables.

Viet Nam is focusing on renewable energy to cope with rising electricity demand while making full use of its natural resources, barren lands unfit for agriculture and millions of rooftops.

The launch of the three new air routes has raised the total number of air routes linking other localities in the country with Phu Cat airport in Binh Dinh to seven, with 60 daily flights to and from the airport.

In a related development, Bamboo Airways has continued to increase its charter capital by VND3.5 trillion to VND16 trillion, making it the largest Vietnamese airline by charter capital as of now. The fresh additional capital was contributed from private sources, reported VnExpress .

Bamboo is also planning to increase its fleet from 30 to 40 aircraft by the end of the year. In Vietnam, it currently operates 60 domestic routes. Last year, it transported over seven million passengers, holding a market share of 20% and aiming to hit 30% by the end of 2021

HCMC – The Haiphong City government shut down nonessential services, including bar, Internet, game, disco, massage and karaoke, from today, May 1 to prevent the spread of Covid-19.

The order was issued last night, April 30 after some locally-transmitted Covid-19 cases had been reported, the local media reported.

The municipal government also ordered residents to wear face masks when they go out, while tasking the police of districts and wards with imposing harsh sanctions on those who violate the regulations on Covid-19 infection prevention and control.

The Cat Bi International Airport, coach stations, train stations and ports were also told to strictly follow anti-Covid-19 measures, including wearing face masks, keeping a safe physical distance of at least one meter and regularly washing hands with sanitizers; and refuse to transport passengers who fail to comply with the Covid-19 safety protocols.

Besides, the Haiphong Department of Health and the city’s districts were tasked with tightening the monitoring of concentrated quarantine centers to prevent cross infection and local transmission.

Many provinces and cities such as Hanoi, HCMC, Nam Dinh and Thanh Hoa have also ordered the suspension of nonessential services, including bar, pub and karaoke, until further notice.

In another development, Thai Binh Province has issued an urgent announcement to search for people who visited Tien La Temple in the province’s Hung Ha District on April 25.

The visitors arriving at the venue from 7.00 a.m. to 10.00 a.m. on the day were required to contact healthcare centers and health agencies for medical checkup and make health declarations.

On April 30, the Ministry of Health reported a Covid-19 case, a 58-year-old woman, who resides in Hung Yen Province. The patient, who was linked to a Covid-19 case in Ha Nam Province , visited Tien La Temple on April 25, leading to the announcement.