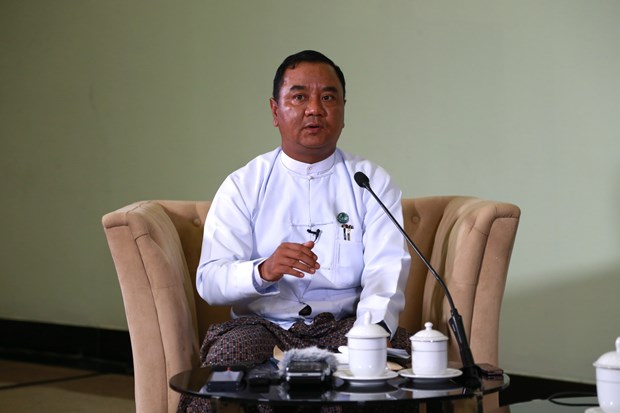 Hanoi (VNA) – A solution to the Myanmar issue can be worked out in the “Association of Southeast Asian Nations (ASEAN) way,” said Zaw Min Tun , spokesman for Myanmar military and the State Administration Council (SAC), in a recent interview with Xinhua.

Chairman of the SAC and Commander-in-chief of Defense Services Min Aung Hlaing has explained the current situation in Myanmar to ASEAN leaders in person and listened to their opinions, views and suggestions when attending the ASEAN leaders’ meeting held in Indonesia’s Jakarta on April 24, Zaw Min Tun said.

A five-point consensus was reached by the ASEAN leaders regarding the situation in Myanmar at the meeting, which called for an immediate end to violence in Myanmar and for a constructive dialogue among all parties involved in the fighting, and also suggested appointing a special envoy of the ASEAN Chair to facilitate mediation of the dialogue process.

“ASEAN leaders have great experience in politics in each country and within the region, which we highly respect and value,” Zaw Min Tun reportedly said, adding that the regional countries’ issues can be solved in accordance with the ASEAN Charter in the “ASEAN” way.

Regarding the consensus reached at the meeting, Zaw Min Tun said that constructive suggestions on Myanmar will be given careful consideration, and visits to Myanmar proposed by ASEAN considered based on the state stability, since priorities at the moment were to restore peace and stability in the country.

He added that the suggestions, which can facilitate the five-point roadmap laid down by the SAC, in line with the interests of the country and the ASEAN Charter, “ASEAN way” and “ASEAN spirit,” will be positively considered.

Relevant work will be carried out by forming technical teams and more details about the process will come out by then, said the spokesman.

Admitting that there are still violence and bloodshed in the country, Zaw Min Tun said tension has been eased to some extent as the number of protests has declined, and they will continue their efforts in restoring order and stability in Myanmar./.

At the UNSC’s online meeting on the Myanmar situation on April 30 – the last day of the month when Vietnam worked as President of the council, participants said that the outcome of the recent ASEAN Leaders’ Meeting is a positive step and emphasized the need to immediately implement the “Five-Point Consensus” reached at the meeting.

Many continued to express concerns about the use of violence and asked the parties involved to restrain and hold dialogues to resolve the issue. The countries showed their hope that ASEAN and the Special Envoy to the UN Secretary-General will work closely in efforts to promote the search for a peaceful solution to the Myanmar issue, including a dialogue with all relevant parties in Myanmar as soon as possible.

At the meeting, Erywan bin Pehin Yusof, Second Foreign Minister of Brunei – the Chair of ASEAN in 2021, informed participants of ASEAN’s efforts to seek a peaceful solution to the Myanmar issue, particularly contents related to the “Five-point Consensus”.

Ambassador Dang Dinh Quy, head of the Vietnam Mission to the United Nations, said ASEAN and its member countries, with their own spirits and methods, will maintain efforts to find a peaceful solution to the situation in Myanmar, including the use of all relevant mechanisms and tools to support the nation in a positive, peaceful and constructive manner.

Quy thanked UNSC member states for their support of ASEAN’s central role in promoting the search for a peaceful solution to the issue as well as the outcomes of the ASEAN Leaders’ Meeting on April 24, especially the Chairman Statement and the “Five-point Consensus”.

Parties involved in Myanmar should bear the main responsibility for addressing the issue, he stated, stressing the need to immediately carry out the “Five-point Consensus” through constructive dialogue and practical mediation, in conformity with Myanmar people’s will and interests.

The UN, the ASEAN and international partners should assist Myanmar and create a favourable environment for the implementation of the “Five-point Consensus”, he stressed.

The Vietnamese representative also called on all parties in Myanmar to end violence and restrain from violent behaviours, and conduct dialogue and reconciliation for its people’s interests and for peace and stability in the region.

He also appealed upon the international community to contribute constructively to helping the country prevent violence and facilitate dialogue and reconciliation.

The Ambassador proposed UNSC member states and the international community maintain support for ASEAN’s efforts and stance. He also affirmed his backing for the Special Envoy of the UN Secretary-General and encouraged mutual support in the work of the Special Envoy and ASEAN to promote a comprehensive, cooperative and constructive approach to solve the current crisis in Myanmar. 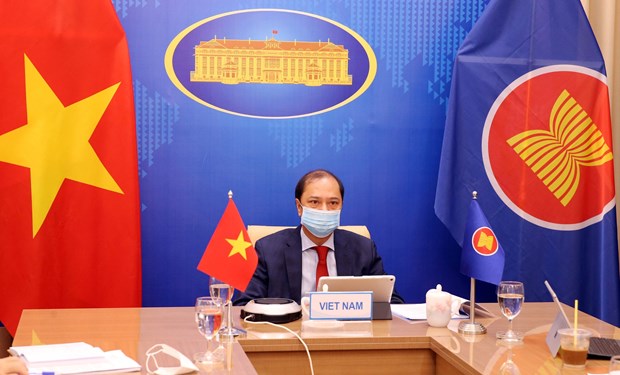 Speaking on behalf of ASEAN states, the Vietnamese official emphasised that amid increasing challenges brought by the COVID-19 pandemic, natural disasters, climate change, competition for natural resources and sovereignty claims, countries need to bolster cooperation and dialogue, build trust and the rule of law, as well as uphold the sense of responsibility, behave according to standards and respect each other to ensure an environment of peace and stability for development.

Highlighting efforts by ASEAN and the US in addressing challenges to regional stability and development, the Deputy Foreign Minister of Vietnam said ASEAN and the US should strengthen coordination to ensure peace, security and prosperous development in the region through ASEAN-led mechanisms, promote a rules-based regional order and adherence to international laws, and resolve disputes in a peaceful manner.

Dung also reiterated ASEAN’s principled stance in the East Sea issue, and voiced a hope that the US will continue to play a constructive role and back ASEAN’s efforts in building the East Sea into a sea of peace, friendship and cooperation, as well as the bloc’s role in helping Myanmar.

For his part, US Principal Deputy Assistant Secretary of State for the Bureau of East Asian and Pacific Affairs Atul Keshap affirmed that US President Joe Biden’s administration attaches importance to the strategic partnership with ASEAN, supports ASEAN’s central role and ASEAN Outlook on the Indo-Pacific (AOIP), and wants to enhance cooperation with the organisation in settling current challenges.

ASEAN countries spoke highly of the US’s contributions to cooperation, development, peace and stability in the region. They appreciated an aid worth 112 million USD from the US to help the organisation cope with COVID-19.

The two sides agreed to foster collaboration in trade-investment, human resources development, renewable energy, marine cooperation, response to natural disasters and climate change through the US’s development cooperation programmes such as the Partnership for Regional Optimisation within the Political-Security and Socio-Cultural Communities (PROSPECT), the Inclusive Growth in ASEAN through Innovation, Trade and E-Commerce (IGNITE), and in development gap reduction via the Mekong-US Partnership.

ASEAN and the US affirmed to closely coordinate to contribute to maintaining peace, safety and stability in the region, including maritime security and safety in the East Sea, which is among major shipping routes of the world with potential risks and complicated developments.

The US underlined its support for ASEAN’s principled stance on the East Sea issue ; welcomed the bloc to perform its role in promoting cooperation, dialogues, and trust building; ensuring the full and effective implementation of the Declaration on the Conduct of Parties in the East Sea (DOC) and the building of an effective and efficient Code of Conduct in the East Sea (COC) in line with international law and the 1982 UNCLOS.

Regarding the Myanmar issue, the US welcomed outcomes of the ASEAN Leaders’ Meeting held on April 24, expressing its support for ASEAN in fostering dialogues and reconciliation to help Myanmar stabilise the situation./.

According to data given by the Chinese General Administration of Customs, the Asian giant imported a total of 910,000 tonnes of rice worth US$434.15 million over the first two months of the year, representing a sharp increase of 203.3% in volume and a rise of 180.6% in value compared to the same period from last year.

Of the total, Vietnamese rice exports to China surged by 206.3% against last year’s corresponding period.

Most notably, China’s rice imports from Pakistan reached the highest level, with turnover climbing to US$127.61 million, representing an annual rise of 339.7% and accounting for 29.4% of its total rice imports.

China’s rice imports from other markets, including Myanmar and Thailand, also increased sharply by 220.4% and 83%, respectively.

During the first quarter of the year, Vietnamese rice exports to China reached 256,516 tonnes worth US$136.17 million, up 58% in volume and 49.7% in turnover compared to the same period from last year, according to the General Department of Vietnam Customs. 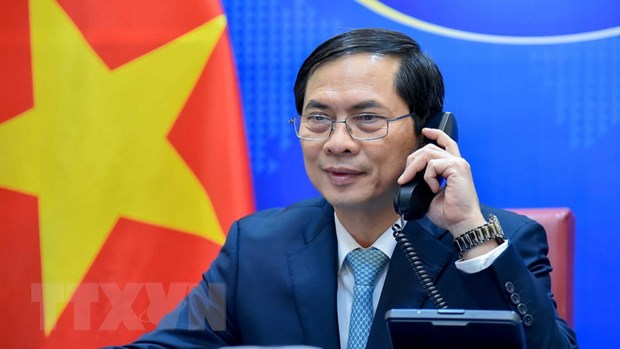 FM Chung congratulated Sơn on his election as Vietnamese FM, pledging to closely coordinate with him to increase the strategic cooperative partnership between the Republic of Korea (RoK) and Việt Nam to new heights.

He appreciated Việt Nam’s efforts in controlling the COVID-19 pandemic. Affirming Việt Nam as a key partner in the RoK’s New Southern Policy, he said he believes that Việt Nam will achieve its targets set out in its 2021-2030 socio-economic development strategy.

Both sides reached a consensus on stepping up close cooperation between the two foreign ministries, including in implementing activities in celebration of the 30th anniversary of bilateral diplomatic ties in 2022, working to achieve a goal of US$100 billion in two-way trade, promoting the relationship between the two countries’ localities and businesses, and protecting citizens.

They agreed to support and coordinate closely with each other within regional and international frameworks such as the United Nations and ASEAN-RoK.

They used the occasion to invite each other to visit their respective country at an appropriate time. — VNS 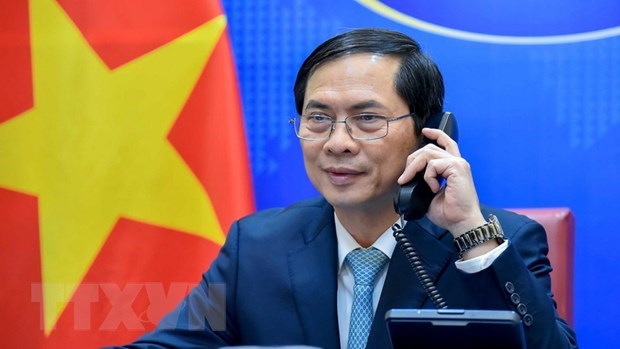 Hanoi (VNA) – Foreign Minister Bui Thanh Son and his Republic of Korea counterpart Chung Eui-yong held their first phone talks on April 28, during which they agreed to maintain all-level exchanges, especially high-level ones, through flexible forms.

FM Chung congratulated Son on his election as Vietnamese FM, affirming to coordinate closely with him to lift the strategic cooperative partnership between the Republic of Korea (RoK) and Vietnam to a new height.

He appreciated Vietnam’s efforts to well control the COVID-19 pandemic. Affirming Vietnam is a key partner in the RoK’s New Southern Policy, he showed his belief that Vietnam will achieve its targets set out in its 2021-2030 socio-economic development strategy.

Son, for his part, expressed his delight at the rapid development of bilateral ties in all fields, affirming that Vietnam always considers the RoK one of its leading partners and wishes to further boost its relations with the country.

Both sides reached a consensus on stepping up close cooperation between the two foreign ministries, including in implementing activities in celebration of the 30th anniversary of bilateral diplomatic ties in 2022, working to achieve a goal of 100 billion USD in two-way trade, promoting the relationship between the two countries’ localities and businesses, as well as in citizen protection.

They agreed to support and coordinate closely with each other within the regional and international cooperation frameworks such as the United Nations and ASEAN-RoK.

They took the occasion to invite each other to visit their respective country at an appropriate time./.