This is an annual activity organised by Tuoi Tre (Youth) Newspaper, the Ministry of Education and Training, and the Ministry of Labour, Invalids and Social Affairs, attracting 170 counselling booths of universities, colleges, vocational schools, and foreign language centres.

The event drew the participation of experts from the Ministry of Education and Training, universities, academies, representatives of the Military Admission Committee under the Ministry of Defence, etc.

At the festival, students and parents were provided with the latest information on high school graduation exams and university and college admission exams in 2021; experience on exam review; how to select the right career and school; as well as enrolment methods of universities, colleges and schools, among others.

Students also had a chance access to forecasting information of the needs of human resources of fields and industries in the future, changes in career structure in the context of strong digitalisation.

With the goal of “building a tectonic, integrated, dynamic Government to serve the people”, under the direction of former Prime Minister Nguyen Xuan Phuc, the most impressive success of the Government in the past five years is shown through three important points: building favorable business environment, administrative reform; macroeconomic management; and effectively controlling the Covid-19 pandemic.

As commented by Professor Le Dang Doanh, “the head of the Government of the previous term had a very new approach”. It is estimated that in the past term, the government chief made 570 working trips. Indeed, Mr. Nguyen Xuan Phuc was an energetic, hard-working and close-to-the-people Prime Minister.

He had a very high working intensity, left a strong impression and lessons in approaching reality, and solving real-life problems in a practical way.

In particular, he has listened to opinions from experts, scientists, public opinion, and the media.

Personally, I was a retired journalist, but whenever I texted him on some hot issues, he always responded, even at midnight. He texted me very carefully. For example, “I have asked relevant agencies to immediately check the issue you mentioned…”.

Experiencing various positions over the past decade, he has proven himself to be a leader with a vision and one who dares to think and dare to do. In terms of working methods, he is very methodical, strong and also very drastic in supervising and speeding up subordinates to implement assigned tasks with the spirit of “Don’t put off until tomorrow what you can do today”.

Once in 2018, during an interview with Mr. Chinh in his living room to write an article about the streamlining of state apparatus, I accidentally heard his phone call. This surprised me very much because when he talked to me, he was very gentle and delicate.

He asked the person on the phone about the results of a project that he had submitted to officials of the Party Central Committee’s Organization Commission for consultation. I did not know how that person answered, but I realized the dissatisfaction of the head of the Central Organizing Committee. He said on the phone: “You are the department leader, but why have you waited for such a long time? If you did not receive feedback from your superiors, you should have called them to ask directly why they did not have feedback. You must change working methods if you want to perform your tasks efficiently and smoothly…”.

That was the working style of Mr. Pham Minh Chinh.

In 2014, I had the chance to talk with Quang Ninh Party Secretary Pham Minh Chinh to listen carefully to his thoughts.

I found him openly handling tasks, especially for the leader of a very complicated border province with 1.2 million people like Quang Ninh, the only province to have both land and sea border with China.

Quang Ninh’s border line with China is quite long. According to Mr. Chinh, protecting the border does not mean no exchange, no relationship. In a border province, when the two sides are only separated by a small stream, if in the process of exchanging and doing business, dealing with border-related issues must be flexible to avoid collision in order to maintain solidarity and friendship.

Mr. Chinh saw the limitations that made it difficult for Quang Ninh to get rich even though it is rich in natural resources and has great potential for tourism development.

He proposed to change the growth model of Quang Ninh from “brown to green”. Even though coal mining is the province’s advantage, Quang Ninh should think of other plans to develop its economy in a sustainable way.

Under Mr. Chinh’s leadership, Quang Ninh has been a bright spot for other provinces to learn in streamlining the administrative apparatus and the political system in general.

The most common thing about the former Prime Minister and newly-elected President Nguyen Xuan Phuc, and the newly-elected Prime Minister Pham Minh Chinh, former Head of the Central Party Committee’s Organization Commission, is that they all have a strong desire for institutional reform and for taking action, being creative for the prosperous development and longevity of the country. All for the happiness of the people! 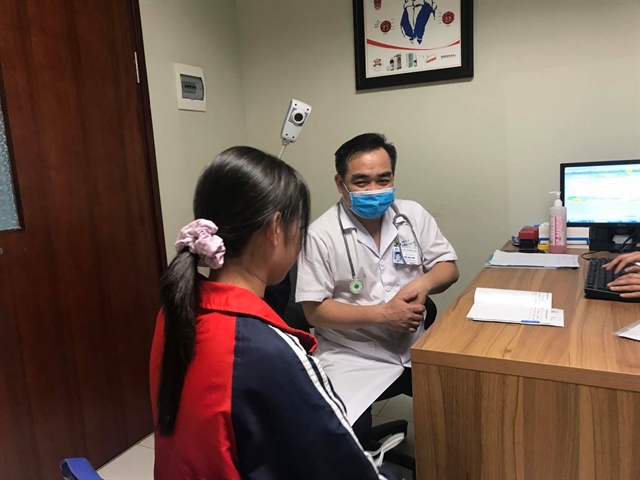 A student seeks a doctors’ consultation at the National Children’s Hospital after exposure to harmful content on the internet. Photo baotintuc.vn

HÀ NỘI – Doctors and parents are concerned about the impact videos with harmful content are having on children.

H, a Hanoian, recently noticed a change in the mental health of her 15-year-old daughter. She became quiet and preferred using her phone to communicating with anyone. Her studies were also negatively impacted.

H brought her 15-year-old daughter to the National Children’s Hospital for an examination, where doctors said her child was depressed as a result of playing games and watching YouTube channels with negative content.

H’s daughter is just one of many children who have been affected by online content, with some children risking their lives after watching harmful videos.

Last October, a nine-year-old boy in Phú Thọ Province swallowed a nail clipper after watching a video on YouTube. Luckily, he received medical help in good time and escaped any long-term harm.

According to Trần Thành Nam, a psychological expert from Hà Nội National University, children do not know always know right from wrong and can be easily swayed by others.

“Many things are repeated over and over, making them think they are correct and should be imitated. It is easy for them to become addicted and make them move away from real life,” he told Tin Tức (News) newspaper.

Adults can have similar problems distinguishing right from wrong when flooded with information which spreads doubt and a lack of trust, Nam said.

Ngô Anh Vinh, Deputy Head of Adolescent Health Department at the same hospital, said his department has treated a number of children for excessive use of social media, such as watching videos that are not age-appropriate and spending too long online.

“When admitted to the hospital, some children showed signs of agitation, anxiety disorders, depression. Due to late detection and the family being unable to control the child’s internet use in the first place, there are many difficulties in the treatment,” he said.

There are a lot of harmful videos online featuring violence or sex that can affect the development of a child and can lead to psychological disorders, he said.

If a child is exposed to such content for a long time, it can affect their social interactions, Vinh added.

It also has an impact on learning because once children are addicted to watching harmful videos, they will feel bored at school, he said.

Mental illnesses such as depression, agitation and behavioural disturbances might occur, he said, adding that the consequences would be very regrettable without timely intervention.

According to experts, the producers of the videos are only focused on increasing views and think little of the consequences of the methods they use to attract viewers.

To be eligible to apply to the YouTube Partner Programme and monetise videos, a channel must have 1,000 subscribers and have earned 4,000 watch hours in the previous 12 months.

YouTuber Thơ Nguyễn recently uploaded a clip on her TikTok page in which she asked a Kuman Thong doll to give luck to students in their studies. She was later fined for posting superstitious content.

Other YouTubers have also been criticised for misguiding children.

Late last year, Hưng Vlog has uploaded on his channel a clip depicting him stealing money from the piggy bank of his brother and sister.

The Hưng Vlog channel with 3 million followers can earn at least VNĐ350 million (US$15,150) per month, according to SocialBlade, an American website that tracks social media statistics and analytics.

A report from the Ministry of Information and Communications (MoIC) shows that there are currently 15,000 Vietnamese YouTube channels with advertising revenue and 350 channels with millions of followers.

The country has more than 60 million internet users and is one of the 10 countries with the highest number of Facebook and YouTube users in the world.

Besides the positive aspects of social networks, there are also many risks of exposure to harmful and violent content and children are the most vulnerable.

According to the Department of Child Affairs under the Ministry of Labour, Invalids and Social Affairs, the national hotline for child protection at 111 received hundreds of calls from parents expressing concerns about their children’s use of the internet while at home during the social distancing period.

In addition to the improvement of the legal framework and imposing strict punishment for those who spread harmful content, it is necessary for authorities and agencies to teach children how to use the internet safely, he said. 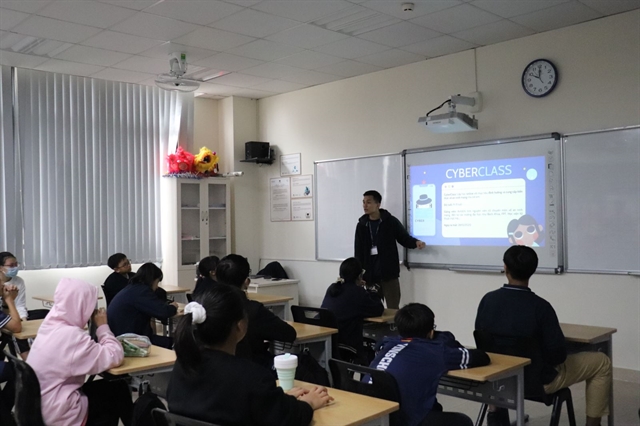 According to Hoàng Minh Tiến, Deputy Director of the Authority of Information Security under the MoIC, some cross-border platforms such as YouTube, Facebook and TikTok have implemented solutions to detect and handle harmful information for children and work with Vietnamese authorities when asked to remove negative information.

To tackle content that is inappropriate for children or content depicting abuse of children, the authority is establishing a Child Protection Network in the digital environment with the core the Vietnam Cyber ​​Emergency Response Center – VNCERT, an agency under Tiến’s leadership.

One of the main tasks is to receive and categorise complaints about inappropriate online content for children.

The complaints can be received via the website of the network, by phone or via email, Tien said.

The MoIC will collaborate with the MoET to introduce a set of standards for identifying harmful content in the teaching of informatics to each age group.

Director of the Ministry of Labour, Invalids and Social Affairs Department of Child Affairs Đặng Hoa Nam said the most effective way to deal with toxic online content is to report it.  — VNS