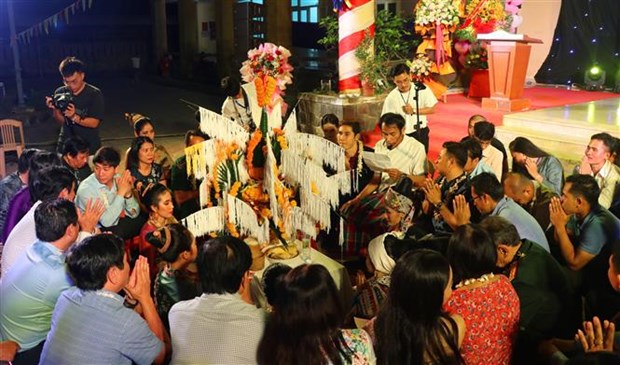 The Bunpimay festival is observed from April 14-16 annually to pray for good weather, health, abundant harvests and prosperity (Photo: VNA)

The Bunpimay festival is observed from April 14-16 annually to pray for good weather, health, abundant harvests and prosperity.

At the event, participants practiced traditional rituals of the festival, including Buddha statue bathing and thread tying.

Phimmachanh Luckyjane, a second-year student of the College of Economics under the Hue University said that the event made he feel like at home. Phimmachanh thanked leaders of the university and authorities of Thua Thien Hue for supporting them in both study and life.

According to Tran Cong Phu, Director of the provincial Department of External Relations, said that over the years, the province has strengthened cooperation with Lao localities in all fields, especially education and training.

Each year, Thua Thien-Hue provides 10 scholarships to Lao students. Since 2002, the province has received 1,200 Lao students, more than a half of them have graduated.

Meanwhile, the northern province of Thai Nguyen also held a get-together to celebrate the Lao traditional New Year, which drew representatives from the Lao Embassy in Vietnam, local authorities and more than 250 Lao students in the locality.

This year, due to the COVID-19 pandemic , many Lao and Cambodian students are not able to return home for this special occasion. The event showed Thai Nguyen’s attention to the students.

Currently, 1,800 Lao and Cambodian students are studying at 11 universities and colleges in Thai Nguyen./.