Following its great success at the Golden Dragon Awards in April where it was recognised as “Hanoi’s Leading Serviced Apartment”, this is the second major award won by the property in 2021.

Guests can seek repose in any of the 262 elegantly furnished serviced apartments or enjoy exclusive access to facilities such as a restaurant, residents’ lounge, fitness centre, and an all-season swimming pool. The public areas, including the Main Lobby and TrEat restaurant, have been designed to sport a blend of local motifs, reflecting a sensitivity to Vietnamese culture while the guestrooms are refined and contemporary, hinting at Hanoi’s artistic traditions.

The International Property Awards celebrate the highest levels of achievement by companies operating in all sectors of the property and real estate industry worldwide and are judged by a highly experienced team of professionals who cover the whole range of property disciplines.

The awards are given out based on the quality of design, construction, and presentation of individual properties and property developments, interiors, architecture, and marketing. A world-renowned mark of excellence, the awards are not an endorsement from any sponsor or judge but are a recognition of achievement in a particular category or discipline by an expert judging panel.

“Since our opening in October 2019, we have always known that we have a special property and to now be recognised with an award of such prestige, it simply validates our belief and I cannot be more proud of this win. This award is a testament of the commitment by our owning company to create a unique property in a competitive market which appeals to a broad range of customers and we are grateful to Ong & Ong for delivering on that vision,” said Humayoon Shaikhzadeh, general manager of Oakwood Residence Hanoi.

Oakwood Residence Hanoi is situated in an upscale residential neighbourhood within the Tay Ho district, offering a sanctuary away from the city’s bustle, with a prime address for both business and leisure travellers alike.

With 262 elegantly furnished serviced apartments and facilities such as a modern fusion restaurant, fitness centre as well as the capital city’s first all-season infinity swimming pool at the rooftop, Oakwood Residence Hanoi is an oasis of grace and serenity.

Young people across the country are encouraged to develop innovative and practical solutions for plastic waste management in the framework of the “Youth and Innovation for Ocean” campaign launched on Monday by UNESCO. To mark World Oceans Day, UNESCO in co-ordination with the Coca-Cola Foundation launched an initiative to seek solutions to manage plastic waste, towards a sustainable green economy in Vietnam.


Accordingly, university students and young professionals will receive technical support from top experts through a mentorship scheme. The projects will focus on reducing, reusing, recycling and managing plastic waste in coastal regions of Vietnam.

The top proposals awarded will be tested in UNESCO Biosphere Reserves, specifically Cù Lao Chàm – Hội An Biosphere Reserve for the 2020 programme, through providing financial support for the implementation of the most innovative ideas.

Furthermore, the initiative will also kick-off the Youth and Young Professionals on Innovation, Science and Technology Platform for Resiliency (U-INSPIRE) as a national hub for supporting knowledge sharing and innovative ideas from young Vietnamese citizens to address environmental and development issues in the country.

The UNESCO Representative to Vietnam, Michael Croft, said this initiative reflects UNESCO’s strong commitment to support Vietnam to maintain a healthy and sustainable ocean, contributing to both the National Strategy on Sustainable Marine Economy until 2030, vision 2045, and the National Action Plan for Management of Marine Plastic Litter by 2030.

“We know that Vietnamese youth are talented and have solutions to offer in all areas of development. Our job is to help these creative young people connect to each other and support the ideas that grow from these interactions,” said Croft. 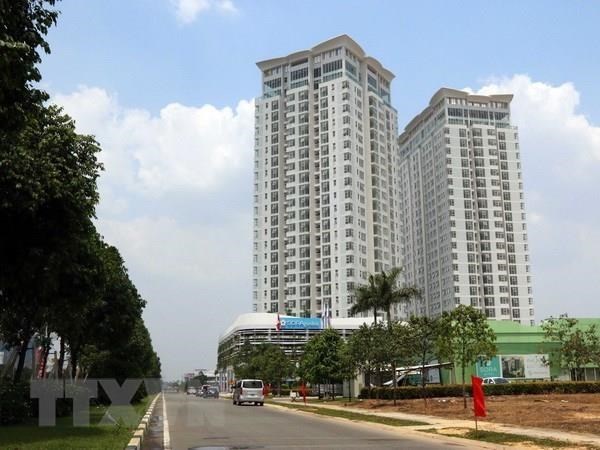 
Hanoi (VNA) – The Hanoi People’s Committee has issued a decision approving the outline for a task of devising the capital’s housing development programme for 2021-2030 , with vision towards 2040.

The programme aims at realising the Resolution of the Hanoi Party Organisation’s 17th Congress for the 2020-2025 tenure and identifying new criteria for the work in line with the local master plan for socio-economic growth to 2030 approved by the Prime Minister.

Accordingly, the city will conduct surveys and assessments regarding the current situation of commercial housing, social housing, resettlement housing, official residence and private housing in urban and rural areas. It will set goals for housing development and make forecasts on demand for housing among social welfare beneficiaries.

The programme will identify local demand for houses and land areas to build different types of housing in the city and links between housing and urban development, among other things.

Hanoi hopes to build a system of suitable solutions to ensure sustainable, modern, and climate change-adaptive housing development, as a basis for the management and implementation of related projects, investment attraction, and the healthy growth of the real estate sector./.

The event was attended by heads of ADSOM+WG of ASEAN member countries, representatives of Defense Ministries of the bloc’s partners (Russia, China, the U.S., Japan, the Republic of Korea, Australia, New Zealand, India) and representatives of the ASEAN Secretariat.

The Vietnamese delegation to the meeting was led by Senior Colonel Pham Manh Thang, Deputy Director of the Department of Foreign Relations under the Vietnamese Ministry of National Defense.

This was the third meeting that Brunei had hosted during the country’s 2021 ASEAN Chairmanship Year.

Speaking at the opening ceremony, Head of Brunei’s ADSOM+ WG highlighted the active participation of ASEAN member countries and the bloc’s partners in the event, affirming that their attendance showed  their support for Brunei as ASEAN Chair in 2021. He expressed belief that the meeting will be a success.

As reported, this ADSOM+WG was held to review the final preparations for the 8th ASEAN Defense Ministers’ Meeting Plus (ADMM+) which is scheduled to take place virtually on June 16.  Delegates discussed and agreed on the agenda and draft joint statement for the upcoming 8th ADMM+.

The article titled “Vietnam should play a major part in Canada’s Indo-Pacific strategy” was written by Geoff Donald, the CABC’s advocacy chair and managing director at Asia Engagement Consulting Group.

According to him, with a rapidly growing population that is expected to reach 120 million by 2050 and a strong GDP forecast of 6.5 percent growth in 2021, Vietnam is a high-potential market for Canadian companies especially in key industries such as agro-food.

Since 2015, Vietnam has been Canada’s largest trading partner in Southeast Asia with two-way trade reaching a record 11.2 billion CAD (9.2 billion USD) in 2020. With the Comprehensive and Progressive Agreement for Trans-Pacific Partnership (CPTPP), Canadian and Vietnamese exporters and investors now enjoy increased market access and tariff reduction in a rules-based trading environment.

Two-way trade has increased by 12 percent over 2019 and by 37 percent compared with 2018, when the CPTPP began to take effect.

Canada’s and Vietnam’s commitment to multilateral trade through the CPTPP and critical new opportunities such as a potential Canada-ASEAN free trade agreement positions Vietnam as an essential partner for Canada in the decades ahead, the author affirmed

As Canada looks to develop an Indo-Pacific strategy, the CABA urges public policymakers and business leaders to prioritise this relationship by increasing support to small and mid-size enterprises looking to take advantage of the CPTPP; expanding Canada-Vietnam business collaborations in high-growth sectors such as agro-food, aerospace, infrastructure, financial services and digital economy; and negotiating a Canada-ASEAN free trade agreement to increase the overall opportunities for Canada in Southeast Asia.

The CABC acts as the voice of the Canadian private sector in ASEAN, and its members, including many of Canada’s leading firms such as Manulife, have a significant and longstanding presence in Vietnam, and many more companies are following suit.

The three points mean Vietnam need only a draw with the UAE on June 15 to advance.

With star midfielder Nguyen Quang Hai suspended, Vietnam’s performance at the Al Maktoum Stadium in the UAE was far less accomplished than in the 4-0 win over Indonesia, but coach Park proved once again he can set his team up to grind out a result.

Malaysia started the match faster and enjoyed the majority of possession but were unable to create any clear chances early on.

In contrast, Vietnam were more effective on their surges into the Malaysian half and enjoyed a lot of joy down the left-hand side, with Doan Van Hau finding himself in acres of space on several occasions.

Vietnam took an early lead when Nguyen Tien Linh, who opened the scoring in the 4-0 win over Indonesia on June 7 night, scored from a header in the 26th minute.

Luong Xuan Truong’s corner was headed up in the air by Malaysia’s captain Aidil Zafuan, allowing Hau to head it back across goal for Linh, who nodded home a quintessential poacher’s finish.

The goal seemed to give Malaysia a spark of life and they would have equalised in the 38th minute if it hadn’t been for a superb save from goalkeeper Bui Tan Truong.

The Vietnamese defence was split by a deep cross from Malaysia’s Matthew Davies which left Syafiq Ahmad with the goal at his mercy, but Truong reacted superbly to tip his header over from point-blank range.

Truong sprung into action again minutes later to deny Safawi Rasid’s direct free-kick and bring Vietnam into the break with their lead intact.

Malaysia only increased their dominance of the ball in the second half, however Vietnam should have doubled their lead against the run of play in the 64th minute, but Nguyen Trong Hoang put his shot wide after being played in by Nguyen Hoang Duc at the end of a mazy run.

Just five minutes later though, Vietnam were made to pay for spurning that opportunity.

Hau clattered into Guilherme de Paula in the box when the two competed for a header and left referee Ryuji Sato no choice but to point to the spot.

The naturalised striker dusted himself off and converted the penalty to equalise.

In a bid to regain control of a game that was slipping away from his side, coach Park shed his normally defensive instincts by bringing on forwards Ha Duc Chinh and Nguyen Van Toan in what turned out to be a masterstroke.

In the 80th minute, Vu Van Thanh slid a pass towards Toan in the penalty area. Before the forward could collect the ball he tumbled to the floor after his heel was seemingly clipped by Malaysia’s Brendan Gan and was awarded a penalty.

Television replays were inconclusive but did suggest some degree of simulation by Toan, though in the absence of VAR, the penalty stood.

Captain Que Ngoc Hai, seemingly the coolest man in the stadium, stepped up and thumped the ball home to make the score 2-1.

Vietnam were able to hold on for the final minutes without allowing Malaysia to create a decent chance to ensure they came away with a famous win in front of the lucky few Vietnamese supporters in the stands.

The win keeps Vietnam on top of Group G with 17 points, two ahead of the UAE.

The two sides will meet for their final match of the second round of qualification on June 15 night with Vietnam knowing a draw would put them through to the next round.