After the final whistle blew in the V. League game between Thanh Hoa FC and HCMC FC, players from the latter, alongside coaching staff, accused match referees of allowing a dubious amount of extra time, giving Thanh Hoa a chance to equalize in the very last seconds.

The referees gave Luis Viegas Filipe, HCMC’s Brazilian assistant manager, a red card before officers escorted the former out of the stadium.

In the post-match interview, HCMC head coach Mano Polking said: “That freekick wasn’t supposed to happen, the referees just wanted to give the other team more of a chance.”

At the end of the second half, the match referee allowed five additional minutes of extra time. In the last seconds, a HCMC foul scored Thanh Hoa a free kick, netted thanks to a header by Trinh Van Loi in the sixth added minute.

“HCMC would have won the game. I’m not happy at all with the referee’s decision to give Thanh Hoa a free kick with only a few seconds left in the game,” Polking said.

The match saw many fouls and rough play from both sides, with Vietnamese-American midfielder Lee Nguyen scoring in the 85th minute for HCMC.

Thanh Hoa manager Ljupko Petrovic had no problem with the call.

“It was clearly a free kick. Both the main referee and his assistant agreed. I see no problem here,” Petrovic said.

After nine rounds of V. League 2021, HCMC stands in 11th with 10 points, while Thanh Hoa is in ninth position with one point more. 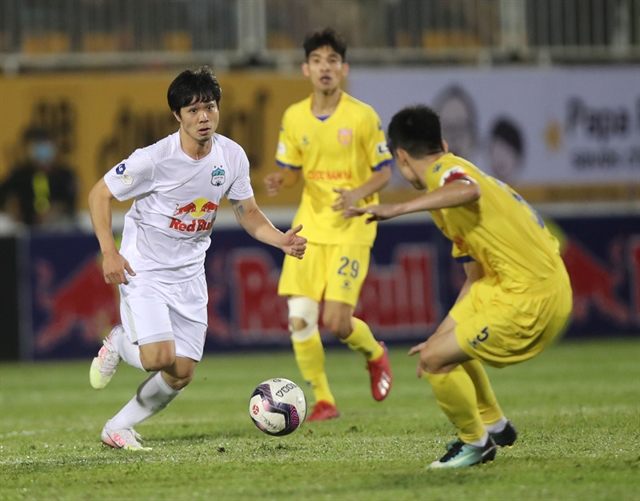 National team star Nguyễn Công Phượng opened the scoring just seven minutes into the game and then scored a penalty to win the game in additional time. Trần Minh Vương netted his third goal of the year in the ninth minute while skipper Nguyễn Văn Toàn celebrated his birthday with a penalty in the 28th minute as HAGL raced out to a 3-0 lead.

Toàn is the V.League 1’s top scorer with six goals and three assists and Phượng is close behind with five.

Nam Định, whose defender Lâm Quang Anh was sent off in the 70th minute after receiving two yellow cards, roared back with goals from Hoàng Xuân Tân at the end of the first half, Rodrigo Da Silva Dias in the 64th minute and Đoàn Thanh Trường in added time.

However after the equaliser went in, HAGL were awarded the game-winning penalty from their first attack after the restart.

“I told my players about Nam Định who are a tough rival through what they showed when playing Becamex Bình Dương in the previous match. And they proved that I was right,” said Senamuang.

“I was not happy but really tense when Hoàng Anh Gia Lai led three goals to nil in the first half. Nam Định were down 3-0 to Bình Dương and they did not give up (before losing 4-3) until the last seconds.

“Football is sometimes dramatic and players must focus till the end. Anyway, it was a lucky match for us,” he said.

The Thai coach also said that conceding three goals in one game was a concern.

Speaking about his double, Phượng said: “My goals and our victory today were for my best friend Toàn. We wanted something special to celebrate his birthday. It was a difficult game but our efforts brought a good result.”

HAGL are on top of the table with 22 points, three ahead of reigning champions Viettel in second.

At Vinh Stadium, Sông Lam Nghệ An beat Bình Dương 2-0 thanks to a brace from Phan Văn Đức, while the national team’s top striker Nguyễn Tiến Linh missed a spot-kick for the visitors.

Earlier, referee Nguyễn Viết Duẩn put in a controversial performance in the match between Đông A Thanh Hóa and HCM City FC which ended 1-1.

Lee Nguyễn opened the scoring for Alexandre Polking’s City side in the 85th-minute but Trịnh Văn Lợi headed in from a free-kick in the closing seconds to ensure the points were shared.

HCM City’s players and coaches surrounded the officials to protest the free-kick decision and the five added minutes.

Duẩn then gave a second yellow card to Polking’s assistant Luis Viegas, which did nothing to end the acrimony.

Police were eventually called to escort the officials off the pitch.

At the post-match press conference, Polking said his team deserved all three points and that the officials erred by awarding Thanh Hóa the final free-kick while ignoring many other fouls by the hosts.

Hồng Lĩnh Hà Tĩnh will have a change in the hot seat after coach Phạm Minh Đức resigned on Monday after his team lost 1-0 to Sài Gòn FC on Sunday.

It was their fifth defeat this season and Hà Tĩnh are at the bottom of the table with only six points.

The club’s managers are said to be in talks with former Hà Nội FC coach Chu Đình Nghiêm and Nguyễn Thành Công who resigned from V.League 2 side Quảng Nam FC several days ago.

Hà Nội are also rumoured to be introducing a new coach in the coming days.

The capital city team are said to have hired South Korean Park Choong-kyun, former coach of Chinese side Tianjin Tianhai FC, a club which was recently disbanded because of heavy debts. VNS