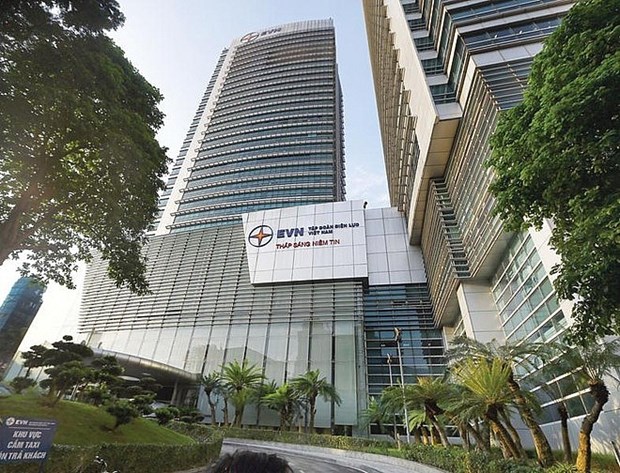 The headquarters of the Electricity of Vietnam (EVN) Group (Photo: www.evn.com.vn)

Hanoi (VNA) – The Electricity of Vietnam (EVN) Group targets becoming a major economic group with sustainable and efficient operations in tandem with market orientations , according to a strategy on its development to 2030 and vision to 2045 approved by the Prime Minister.

The group aims to earn annual operating profits while developing State capital invested in EVN and its own capital channelled into other companies.

EVN takes responsibility for ensuring electricity supply and building smart power grids in an effective and concerted manner and which are capable of interconnection.

It must also guarantee power supply for residents in remote and mountainous areas as well as islands. The group has been asked to complete its digital transformation by 2025.

Another task by that year is to raise its customer service quality to a level on par with ASEAN’s top 3 countries (ASEAN-3) and maintain that ranking until 2045.

To achieve the targets, it will apply modern and environmentally-friendly technologies and promptly devise plans to improve existing coal-fired power plants so as to meet environmental protection requirements in each specific period.

The group will also bolster science and technology capacity, technology transfer in the field, and environmental protection efforts./.

Choi Joo Ho, CEO of Samsung Vietnam, submitted the proposal last week to the Ministry of Industry and Trade last week. He asked that the company participates in the Direct Power Purchase Agreements (DPPA) policy that is being studied for a three-year trial.

Three to four other big companies also want to join the program, a person familiar with the matter told VnExpress .

The program will allow manufacturing companies with minimum 22-kilovolts power lines to negotiate and buy directly from solar and wind power plants.

In the first three years, when the policy will be trialed, the customer needs to buy at least 80 percent of the agreed amount of power.

Solar and wind farms with a capacity of 30 megawatts or more can sign these agreements, and need to begin commercial operation within nine months of joining the pilot program.

The program with a total capacity of around 1,000 megawatts is set to start this year and run until 2023. At the end of the trial period the ministry will review it and take a decision on making the arrangement permanent.

The program is being considered amid the challenges solar power plants face in running at full capacity due to the limited capacity of the country’s transmission lines.

Vietnam is set to cut up to 1.74 billion kilowatt-hours of renewable energy in the second half this year to deal with national grid overload, Vietnam Electricity, has announced. 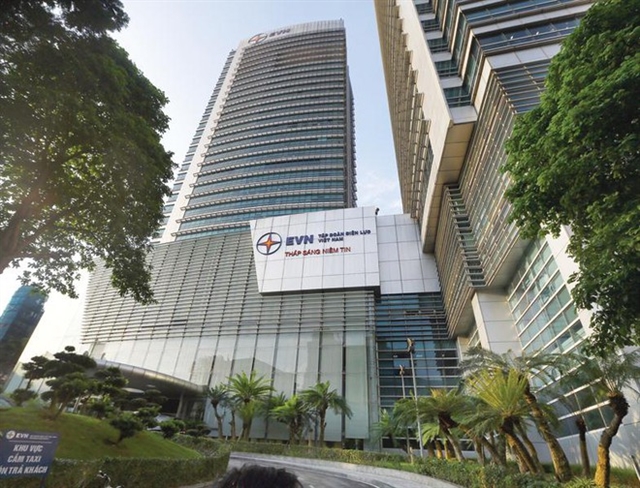 EVN’s headquarters in Hà Nội. The group aims to earn annual operating profits while developing State capital invested in EVN and its own capital channelled into other companies. — Photo evn.com.vn

HÀ NỘI — The Việt Nam Electricity (EVN) is aiming to raise its customer service quality to a level on par with ASEAN’s top three countries and maintain that ranking until 2045.

The goal is part of a strategy on its development to 2030 and vision to 2045 approved by former Prime Minister Nguyễn Xuân Phúc in April.

The firm also hopes to become a major economic group with sustainable and efficient operations in tandem with market orientations in the period.

The group aims to earn annual operating profits while developing State capital invested in EVN and its own capital channelled into other companies.

The EVN will take responsibility for ensuring electricity supply and building smart power grids in an effective and concerted manner and which are capable of interconnection.

It must also guarantee power supply for residents in remote and mountainous areas as well as islands. The group has been asked to complete its digital transformation by 2025.

To achieve the targets, it will apply modern and environmentally-friendly technologies and devise plans to improve existing coal-fired power plants to meet environmental protection requirements.

The group will also bolster science and technology capacity, technology transfer in the field, and environmental protection efforts. — VNS

EVN has also suspended around 8,000 megawatts of hydropower plant capacity from 11 a.m. to 12 p.m. every day in the first four months of this year to prioritize solar power intake, which peaks at noon.

However, reducing the intake from coal-fired and hydropower plants comes with consequences, with the rising frequency of turbine restarts increasing the risk of system failures.

The number of restarts due to oversupply last year surged 2.6 times over 2019 to 192. In the first four months this year alone, there were 334 restarts.

With these cuts, EVN seeks to prioritize solar and wind power intake and also wants to double their production from last year to 32 kilowatt-hours this year.

Solar and wind power capacity is set to hit 20,000 megawatts this year, accounting for 30 percent of total supply.

But due to limited capacity of the transmission lines, renewable energy only accounts for 12 percent of total production. The figure is set to rise to 17 percent in the next five years.

The rest of production comes from traditional sources like thermal power and hydropower.

EVN has earlier said it will also cut 15-20 percent of solar and wind power capacity to reduce pressure on the national grid.

“Cutting down renewable energy is something EVN does not desire because it hurts developers,” Nguyen Duc Ninh, director of the National Load Dispatch Center under EVN, said at a meeting Tuesday.

The dilemma that Vietnam faces now, having an oversupply of renewable energy but limited transmission capacity , has happened because of poor management and planning, experts say.

Tran Dinh Long, deputy chairman of the Vietnam Electrical Engineering Association (VEEA), said that the boom in solar power in recent years show lack of anticipation on the burden they would place on the national grid.

Hanoi (VNA) – Ho Chi Minh City has prioritised the development of vehicles with clean fuel, particularly buses running on compressed natural gas (CNG), in a project to bolster the use of public transport in tandem with restricting personal vehicles for 2021-30.

The development of public transport is also essential for curbing traffic congestion in the southern hub.

Statistics of the municipal Department of Transport showed that 2,043 buses are running on 127 routes in the city. Of them, 496 are CNG ones, which help reduce environmental pollution.

In addition, there are only three CNG pump stations serving 180 vehicles per day.

To address the problem, the transport sector has rolled out various measures for clean-fuel vehicle development in the coming time. 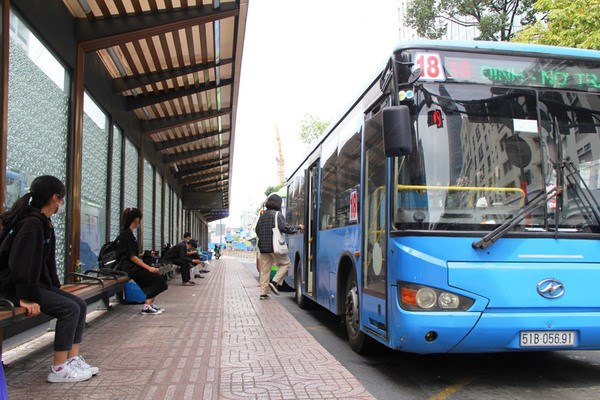 A bus arrives at a station in HCM City (Photo: hanoimoi.com.vn)

The Transport Department is working with PVGas South and relevant agencies in simplifying administrative procedures for the building of new pump stations.

Local authorities have also mulled over electric bus development. Three routes have been piloted since 2017 and the city will test the vehicle for tourism purpose in Can Gio district.

Of note, the Government has allowed HCM City to pilot the use of large electric buses with a capacity of 60-70 passengers.

Meanwhile, the municipal People’s Committee is advised to propose the Government promulgate policies and guide the locality to make planning on infrastructure system serving buses using clean fuel, along with incentives for investors./. 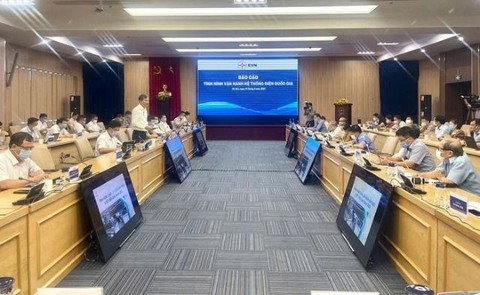 According to Ninh, the proportion of renewable energy currently contributed up to 60 per cent of the peak load at noon and was prioritised for use at a maximum level, meaning the centre had to stop buying power from hydroelectricity sources around the time. As the result, the hydropower plants in central and southern Viet Nam, with nearly 8,000MW, had to stop working at noon to prioritise the purchase of renewable energy.

The centre also said from 2019 to the end of 2020, there was a boom in renewable energy from solar and wind power. For example, Ninh Thuan Province has the largest rate of renewable energy in the country with thousands of MW, but has very low demand for electricity itself so it transfers most of the production to other localities.

As of April 2021, out of the total power capacity, the country has 7,700MW of rooftop solar power and about 9,200 MW of farm solar power. The current capacity of wind power projects of 612MW was expected to increase up to 4,500-5,400MW between September and October this year.

The centre, which is responsible for ensuring normal operation of the electricity market in Viet Nam, added the phenomenon of redundant renewable energy was now affecting the operation of the power system, such as overloaded local lines and large gap in load between peak and off-peak hours.

Sharing the same view, Ha Dang Son, director of the Centre for Energy and Green Growth Research, said that the explosion of solar and wind power projects in recent years mainly comes from the fact that local authorities have approved too many projects.

Nguyen Minh Khoa, head of EVN’s legal department, said in accordance with the Law on Investment, the Provincial People’s Committee will approve investors of solar and wind power projects. When the local authorities issue a project license, EVN is not allowed to refuse to buy electricity from those projects but only take part in price negotiations.

At first, EVN strived to operate all the sources with the lowest total production cost. The main reason for the issue was the low demand for electricity, the lack of synchronous investment in grid projects and the slowdown of the economy and the widespread influence of COVID-19. The group will continue to review, update, and adjust the processes to suit the electricity system’s operating conditions.

Ngo Son Hai, EVN’s Deputy General Director, also said that the reduction of renewable energy sources has been reported to the Ministry of Industry and Trade.

He added that according to the ministry’s guidance, as renewable energy sources are overloaded, they will be a priority to be used the most. Once the mobilisation remains redundant, they will be equally cut to fit the situation. — VNS